Raw: Welcome back to Bizzarroland 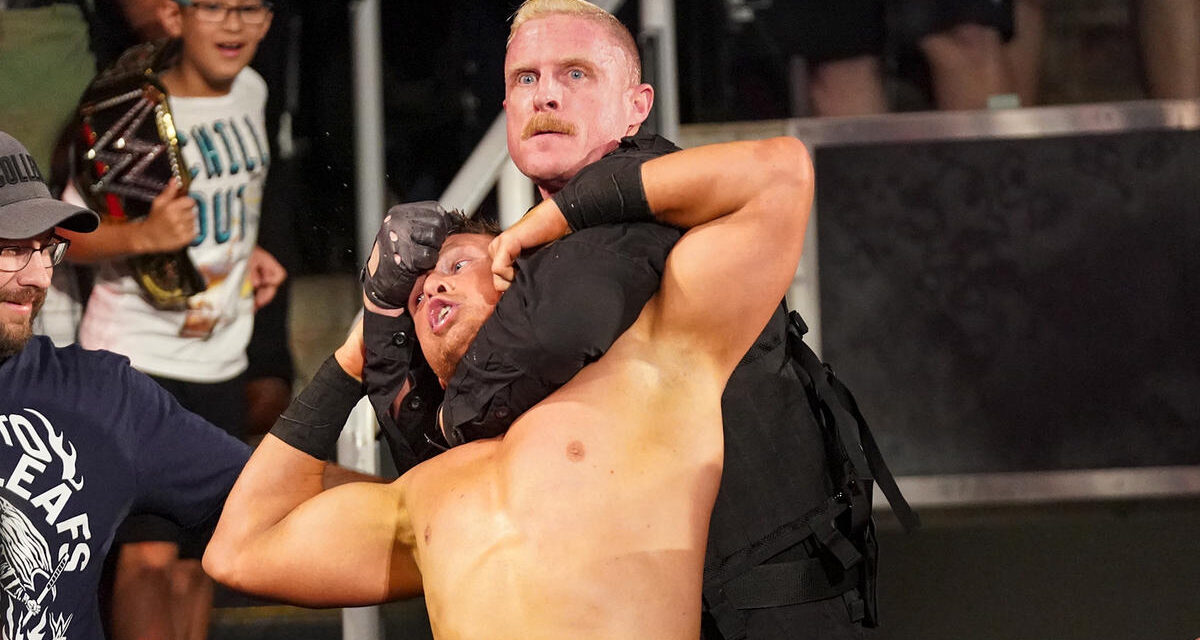 For those confused by the title of this Raw report, WWE liked to call Toronto, ON Bizzarroland because the heels would be cheered and the faces would be summarily booed.

We start with a battle in Gorilla between Riddle and Seth Rollins. The action was hot and heavy, but quickly cut away, thankfully, or the shaky cameras would have ended this review early due to passing out.

Our trio of commentators start to introduce us to the action when Rollins and Riddle emerge in the stands of the ACC. They’re up in some of the cheaper seats then back down to ringside as various stooges try, unsuccessfully, to keep the two apart. Riddle, for what it’s worth, looks like he’s battling in his boxers.Calm restored, the trio of talking heads preview what we have coming up tonight.

First up out of the gate, for reals, is Trish Stratus, making the seemingly now standard visit any time WWE comes to T’rana. FWIW, Trish is wearing her WWE Hall of Fame ring. The fans chant for one more match, which prompts the arrival of Control.

Coming out of a poorly-timed commercial break, Control is going all fangirl before they get the heel speak going. Cheap pop for Edge being from “Toronto” (which apparently has absorbed Orangeville), before Control really goes off on the HOF’er. Bayley really lays it in thick before Bianca Belair makes her presence known. Belair with the bad pun of the stratosphere. Stratus threatens Bayley, which apparently is a trigger for Asuka and Alexa Bliss to come out. Hey remember when Bliss and Stratus were going to face off? Yeah, me too. The music queue is off by a few ticks before we head into the Women’s Tag Team Tournament match.

Let me say this now, and say this loudly – Dakota Kai is a future Women’s Champion. Dakota has all the moves and charisma to be the lead.

Asuka and Bliss show some great timing in the match and are really gelling well together. The faces really get on a roll, before this lengthy match goes to the heel turn on top.

At various points, we see various female Superstars backstage watching the action. We FINALLY get what we’ve been waiting for – IO and Asuka in the ring together, for a brief period. Good tease of what’s to come for sure.

Kai continues to impress anyone with a pulse as the match continues, including a MASSIVE sell of Bliss’ DDT. Asuka locks in one of her submissions soon after before a cluster gets the action going everywhere. Eventually, Asuka gets Kai in the Asuka Lock on the not-legal Kai and IO SKY takes advantage and gets the roll-up win. Really strong match, solid, logical ending.

Oh we’re getting Dakota vs. Raquel one more time. Love it.

Kevin Patrick is backstage to chat with Dolph Ziggler to talk about his upcoming match with Finn Balor when the Prince (and Rhea Ripley) come out. The interaction ends with a slap from the Show Off and a bit more trash talk.

Decent action here but two longer matches in a row inevitably results int he latter feeling slower (and the crowd reaction reflected this). Anyone complaining about little in-ring action has now been silenced.

Late in the match, the action truly gets to a back-and-forth point. Ziggler starts to pull off his DX repertoire with the Famouser. Near fall from the Zig Zag gets the crowd going full tilt. Coup de Gras, following some Ripley interference, gets the duke for Balor.

As Control leaves, we see Adam Pearce and a couple henchmen looking for Dexter Lumis.

Alpha Academy is out next for their open challenge. Chad Gable proclaims he’s looking for new students then heels on the crowd by pulling on every stereotype about Canadians, short of maple syrup and bacon. A “go Leafs go” chant breaks out, and the rest of the Canada rolls their eyes. Seriously Toronto, it’s like shooting fish in a barrel to make fun of the Leafs.

The challenge is answered by…

Owens is back to wearing his duct tape KO tee shirt, and somewhere Red Green is smiling.

Owens gets a KO chant as he displays some relentless, vicious offence. but Gable’s up to task and hits a NASTY German Suplex on the apron. Ouch, eh?

Back from break, Gable goes for the Hat Trick Germans, but Owens reverses on try number three. Owens hits a major Frog Splash later for the two. Bridging German gets two for Gable. Swan Dive headbutt gets two for Gable, and the Benoit tributes are starting to get scary.

Later, Owens reverses a Superplex attempt and gets one of his own. Exchange of missed top rope moves ends emphatically with a Pop-up Powerbomb. Awesome stuff.

Owens is attacked post-match by Otis but a running attach results in a post for Otis. More post-match shenanigans result in a Stunner for Otis and a powerbomb on Gable into Otis’s gut.

Okay WWE, you now have Owens looking like the biggest babyface in the company. Let’s see what happens.

Backstage, Judgement Day talks to the camera. Damian Priest cuts in on Edge.

Before the match, we learn that Toxic Attraction is out of the Women’s Tag Team Championship tourney. A Second Chance Fatal 4-Way will take place on SmackDown to determine their replacements.

Aliyah pulls out the Ma-Trish and gets a decent series of moves thereafter. She’s definitely improved since her days floundering in NXT. Bayley, by the way, is the only active member of the “Four Horsewomen”. Aliyah continues the “Trish-bute” before pulling off the Lance Storm nod with the rolling single leg crab. Bayley turns the tables and finishes things off soon after. The hometown curse continues in WWE.

Control comes out to celebrate, and unfortunately we we don’t get the spot I hoped for – of the trio taking out Stratus to get some strong heat.

Backstage, AJ Styles and Bobby Lashley walk by a small fire en route to the ring. Lumis is at large!

The action starts hot, including Styles showing why he throws the best Ushi Goroshi in the biz, but again, the long matches make it feel like we’re starting to get a lag in the show. There needs to be a blend of longer matches with some shorties. All four, to their credit, do everything they can to keep the crowd engaged and do it pretty well. The mix of different styles definitely helps this.

Late in the action, Styles is assaulted by someone, and surprisingly it isn’t Lumis. It kinda looked like the former Ricardo Rodriguez to me. Lumis then emerges from riot gear and drags Miz off for the confusing non-finish. Let the “Wyatt 6” rumors run amok.

Back in the ring, Ciampa is victimized by Styles and Lashley.

Next, we get a true surprise as Johnny Gargano comes to the ring. He gets a MASSIVE Johnny Wrestling chant. Gargano goes into a very strong promo.

Gargano is then interrupted by his former prodigy in The Way, (Austin) Theory. We get a “who’s your Daddy?” chant at Theory, who then begs for an old-time high five. He gets a Superkick instead. Great debut for Gargano.

We’ve got about a half hour left for this match (intros included).

Edge is in Canadian colors.

Hot action, as you’d expect, with Edge taking a Border Toss through the announcer’s table to get into the break. Just to rub it into the AEW rivals, Priest hits the Killswitch on Edge. Edge hits the Edgecution for two later on. Reckoning out of nowhere gets Priest a breath rather than the pinfall as he goes for the Spear, and is met with South of Heaven.

Ref bump leads to Priest getting the phantom win. Instead, he goes for the chairs, but misses the Conchairto. Edge breaks off a piece of the chair and goes for the Crossface, but still no ref. You’d figure Charles Robinson would have built up some tolerance after so many years of being mauled.

Edge hits the Canadian Destroyer before a spear to get the duke.

Edge goes for the chairs following the win, but Riplet appears to get the ballshot. Judgement Day then strikes en masse. Beth Phoenix then enters the ring with a chair in hand, challenging Ripley, who backs away with her Judgement Day cohorts.

Fun ending to the night. See you some other time!