Theory shows up, but Ziggler shows off 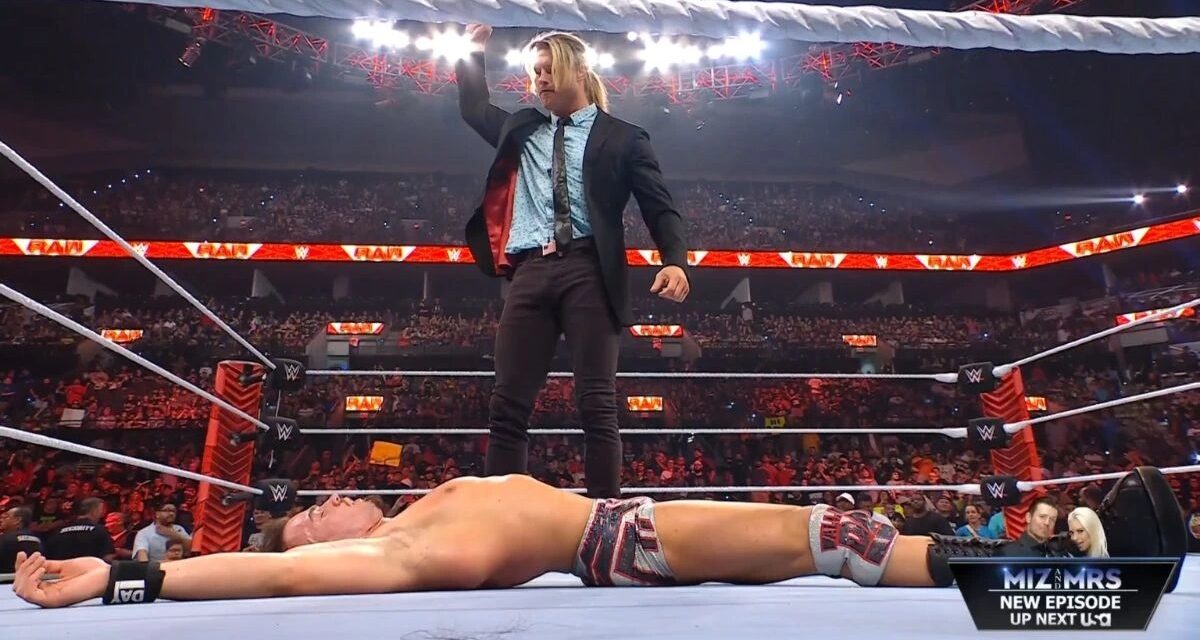 Brock Lesnar sets the tone for tonight’s show with a promo that compares Roman Reigns with a hog ready for slaughter, and the Texas crowd eats it up. Paul Heyman steps out to interrupt, and it’s amusing when he tries to use the fans’ “You suck” chant for his own purposes, telling them that Lesnar doesn’t suck. The crowd gets really quiet — I don’t think they understood what he was doing.

Heyman pumps Lesnar’s tires, claiming that he is the favourite going into the No Holds Barred championship match at SummerSlam. However, going into full Mortal Kombat mode, Heyman says that Reigns will win even if he has to stick his hand up Lesnar’s ass and pull out his heart. This, not surprisingly, takes Lesnar aback a bit.

Next to interrupt is Mr. Money in the Bank, Austin Theory. He promises once again that he will be there to pluck the championship from whoever wins at SummerSlam. Theory also repeatedly plays a clip from the Elimination Chamber, showing Brock sending Theory off the top of a pod with an F5, although it cuts the clip each time before Theory lands so we don’t see him arrive somewhat safely on his feet. Nobody gaslights quite like the WWE retro-machine.

Theory promises Lesnar that he hasn’t forgotten about that, and signals for the Alpha Academy to attack from outside the ring. As you might expect, Lesnar makes short work of them, even sending Otis into the announcer’s table with an FU. Yes, you read that correctly: it was definitely an FU, not an F5.

Next up after a break, Rey and Dominik Mysterio are in the ring standing toe-to-toe with The Judgment Day members Finn Balor and Damian Priest. Priest runs Rey down, appealing to Dominik that they have more to teach him than his father does.

Balor grabs a mic and reminds everyone that they turned on Edge because he’s a bad leader, and claims Rey is a bad leader too … and a bad father. Rey responds by grabbing a mic but instead simply attacking Balor as the Mysterios chase the heels from the ring.

We pick up on the match after another commercial break, where Rey sends Balor to the floor with a hurricanrana and follows with a crossbody over the top rope. Returning to the ring, Balor catches Rey with a backbreaker and then focuses further attacks on that region. Balor goes for cheap heat by starting a Three Amigos suplex sequence, though it might make it worse that he didn’t even finish.

With Mysterio perched on the top rope moments later, Balor chops him down and now zeroes in on Rey’s left knee. Following another break, Mysterio sets Balor up for the 619 and connects, but he limps his way to the top rope and can’t follow with the the frog splash as Balor moves out of the way. Balor plants Rey near the corner and hits a solid Coup de Grace for the decisive win.

Dominik comes to his father’s side as Balor continues pitching the idea of joining The Judgment Day.

After the next break, Becky Lynch is atop the commentator’s table , continuing her tirade about being treated unfairly, and is especially enraged by Carmella getting a rematch tonight. Lynch demands a title match of her own at SummerSlam.

Bianca Belair (C) VS. Carmella – for the Raw Women’s Championship

Lynch stays at ringside to watch as Carmella takes a sort of chop/clothesline from Belair before the fight goes to the floor and yet more commercials (it really feels like there are more of them tonight). Coming back, Belair cracks Carmella with a backbreaker, but the challenger hits a top-rope crossbody soon afterwards to take control of the match.

She tries another one, though, and this time is caught by Belair — who didn’t even flinch before turning it into a deadlift suplex. Jimmy Smith, just back this week after apparently spending all of his time watching old Ricky Steamboat matches, says that 99% of the time after a flying crossbody — the match is over.

Carmella takes an ugly faceplant but sneaks in a superkick for a very close two count. Once more, she tries to repeat with another superkick, and once again is caught and in position for a KOD but she turns it into a Mella Buster on the way down for another very near-fall.

Belair regains her composure and drops Carmella with a stiff and ugly spinebuster. Things get uglier on the floor as Carmella rakes Belair’s eyes, and the champ responds by running her into the ringpost. After Carmella gets back in the ring, Lynch distracts and occupies Belair long enough for Carmella to gain the count-out victory.

Belair, of course, remains champion, and she takes her frustrations out on Carmella with a KOD.

Next up is an episode of MizTV, with his guest Tommaso Ciampa — though most of the focus is on the developing beef between Miz and Logan Paul. The crowd is very lukewarm on all of this. Also unimpressed is AJ Styles, who says that The Miz hiding behind Ciampa makes him look like a coward — with tiny, tiny balls. This is really still happening. Oh, and this is also in advance of a Styles VS. Miz/Ciampa handicap match.

Styles charges the ring and chases the heels out, but before they can regroup, Ezekiel joins AJ in the ring and says he got Adam Pearce to turn this into a two-on-two tag team match.

Ciampa delivers some hard chops, but Ezekiel mule kicks his way out of the corner and responds with his own slaps cross the chest. Ezekiel lifts Ciampa up coming off the ropes, letting him crash to the mat. Heading out to the floor, though, Ciampa runs Ezekiel into the barricade before tagging in Miz who runs Ezekiel into the commentator’s table before shouting about his big balls.

After a break, Ciampa and Miz drop Ezekiel with a double back elbow, but a lifting knee by Ezekiel drops Ciampa and allows for both teams to tag. Styles uses a Phenomenal Blitz and gutbuster, and Miz counters with a DDT. Styles locks in the Calf Crusher on Miz, and Ciampa gets in the ring to break it up, attacking Styles until the ref calls for the bell.

Backstage, Matt Riddle and Bobby Lashley meet up ahead of their tag match later tonight, discuss Stranger Things, and look forward to getting their hands on their current nemeses in Rollins and Theory respectively.

Asuka runs right over Nikki to open the contest, but after Bliss tags in, Doudrop also tags in blindly and plows her to the mat. Asuka ends up in the ring against Nikki, laying kicks into her and Doudrop on the apron as well. Bliss re-enters and brings Nikki down with a DDT for the uneventful win.

Ahead of a singles match, Jimmy & Jey Uso get some ring time to talk about how great they are. Out come The Street Profits who promise victory at SummerSlam. Before the match can start, out comes R-Truth with a wish to help these two teams talk things over. When they don’t seem interested in that, Truth says he’s also a certified referee and auditions for the SummerSlam job of Special Guest referee during the tag titles match.

After The Usos tell him to get lost, he slides over next to the Street Profits and says he’ll fight with them — if only there was a third villain. Omos, it seems, will fill that role.

The match begins after a break, with Omos barreling Dawkins to the mat. After Jey spends some unsuccessful time in the ring being double-teamed by the babyfaces, Omos re-enters and chops R-Truth up and down, trapping him in his corner until the Profits enter with a double dropkick on the Usos. That leaves Truth to go after Omos which goes as you’d expect.

Coming back from ads, Omos is still beating down Truth, holding him up for a superkick from Jey. Jimmy and Ford both tag in with Montez overpowering and outmaneuvering him. Ford hoists Jimmy up on his shoulders, tagging in Dawkins to jump off the top rope with a spinning back elbow. Tags break down as everyone comes in for a turn to fight, including Truth who tries a Five Knuckle Shuffle but is grabbed and pulled outside by Omos.

Finally, things settle down as Omos tags in and slams Dawkins to the mat for the victory.

Winners via pinfall: The Usos & Omos

Kevin Patrick welcomes Seth Rollins to his interview area. Rollins doesn’t care a bit about Ezekiel’s true identity, but he is concerned with Matt Riddle and promises he’s going to get burned. Interrupting is Theory, seeking advice from Rollins on cashing in Money in the Bank. They walk off together.

Next is another creepy promo, with more signs pointing to Edge’s history — a burning red flannel shirt, an RKO sign, and a John Cena hat.

Theory and Rollins start off against Riddle, tagging in and out at will until Riddle catches Theory and throws him into his own corner, bringing in Lashley who more or less spears Austin in the corner. Rollins tries to interfere, but Lashley grabs both heels for a double DDT.

Rollins pulls down the top rope to send Lashley to the floor, but a suicide dive follow up doesn’t work and Lashley runs Seth’s head (well, arm) into the corner post. Just before a break, a surprise ringside guest makes his entrance: Dolph Ziggler, suited-up, ponytailed, and looking just a little like Mr. Perfect in his commentary days.

Back from ads, Ziggler is seated at ringside to watch Rollins hit and inverted superplex on Riddle. Matt kicks out on the ensuing pinfall attempt, and strikes his way back into the match before Rollins locks in a sleeper to slow him down.

Theory is in next but is caught in the Bro-Mission, powering his way out and allowing for a double tag. Lashley enters on fire with a running powerslam that might have ended the match if not for Theory. Austin takes a towering chokeslam, but that allows Rollins to club Lashley to the mat and follow with a frog splash for a two-count.

For some reason, Riddle now gets the hot tag and does his version of Randy Orton’s greatest hits, with Theory being pulled from the ring by Rollins ahead of an RKO. Lashley spears Rollins through the barricade, and when Theory re-enters he rolls Riddle up and gets his feet on the ropes. Ziggler finally gets involved by breaking up the attempted pinfall and sitting down again as Riddle RKOs Theory to close out the match.

Winners via pinfall: Lashley and Riddle

The final image of the evening sees Ziggler superkicking Theory and standing tall over top of Mr. Money in the Bank to the delight of the fans.

Huh, that was a decent episode of Raw. Yes, it’s still too long, but there was a little energy in a lot of the performances tonight and not everything went the way you’d expect. I’ll hold my breath to see if they can pull it off two weeks in a row.