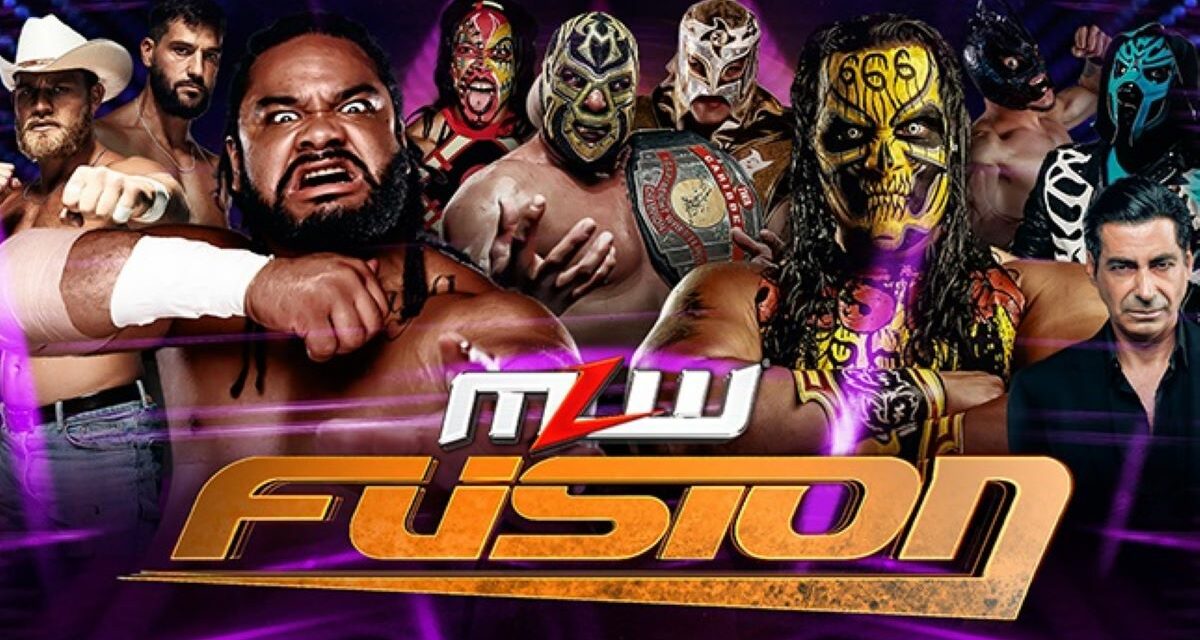 By MICHAEL PATRICK ROGERS – For SlamWrestling.net

MLW was in Dallas Texas this week. The show opened with a quick profanity-laced promo of Jacob Fatu yelling into the camera about Bestia 666 getting into his business and that he’s going to rip his head off in their match later in the night.

The first bout of the night was Holidead and Chik Tormenta. Holidead made her way to the ring first, dragging Dr. Dax behind her by a chain. She was accompanied by Gangrel. Before Chik Tormenta made her entrance, there was a cut to Cesar Duran entering the building backstage, in anticipation of his press conference later in the show.

The action began, and almost instantly went to the outside of the ring. Chik Tormenta dives through the ropes and takes out Holidead and Dr. Drax by the barricade. Holidead told the fans to “shut up” before getting back into the ring as she was being booed.

Holidead would stretch Chik Tormenta after getting back in the ring. Chik Tormenta took Holidead down, but a failed attempt at a backward summersault off of the top rope would be a match-ending mistake. Holidead finishes off Chik Tormenta with a modified Pedigree.

Holidead was caught for a quick interview on her way out of the ring. She said she was going to run through the MLW featherweight division and that the “Dark days are upon us”.

The Von Erichs In The Woods

A package was shown of 5150 stealing a family heirloom from The Von Erichs and throwing it into a river. The Von Erichs were in the woods playing with a whip and talking about how to get 5150 back. They would go on to holler and break a piece of wood, scaring one of two cute dogs who were hanging out nearby. Hopefully, they can dredge that river and get that belt back, but you know how strong the undercurrent is in some rivers.

Hammerstone entered the building with his suitcase in tow, ready for the press conference later in the show. He fist-bumped The Von Erichs before leaving.

Octagon Jr came out first in all gold. Next to the ring was Hijo de LA Park. El Dragon made his entrance next, and he brought his kid to work with him. The IWA Caribbean Champion, King Muertes, would enter the ring last. He looked a lot like a member of GWAR, with his armor and helmet.

The match starts with King Muertes clearing the ring before exchanging chest slaps with El Dragon while the other two competitors disappeared for several minutes outside of the ring.

Hijo de LA Park gets back in and slings Muertes out of the ring. Octagon Jr would break up the first pinfall attempt with a dive off of the top ropes. This trend would continue, with two men in the ring and two on the outside for most of the match.

El Dragon would clothesline Muertes over the barricade and then dive off of the top turnbuckle to take him out in the crowd.

This was a classic Lucha-style wrestling match with brisk pacing. Octagon Jr would win the match by finishing off Hijo de LA Park to become the new Caribbean Champion.

A Tankman package was played, with Calvin talking about his childhood in front of a bunch of cool bull skulls hanging from a wall in the background.

First out to the ring was Bestia 666. Next out was Jacob Fatu, who looked like he had just gotten out of the shower he was so wet.

The two men went after it immediately. The brawl would lead to the outside of the ring. Fatu would order the timekeeper out of the way before bashing Bestia’s head into the timekeeper’s table. He’d then yell at the announcers before getting back into the ring. Moments later the steel chairs would be retrieved from under the ring.

Jacob Fatu would manhandle Bestia 666 for the majority of the first half of the match. Bestia got some momentum and slammed Fatu’s head into a chair placed in the corner before making a few pin attempts and slamming Fatu with a chair across the back.

Bestia pulled out what looked like an unfinished door or table from under the ring. He propped whatever it was up on two chairs, forming a bridge. But before he could use it as a weapon, Bestia 666 got put through it himself and Fatu finished him off with a backflip from the top turnbuckle.

After the Jacob Fatu and Bestia 666 bout, a Bunkhouse Brawl match between The Von Erichs and 5150 was teased for next week.

Duran gave a very brief press conference in front of a plain black curtain. He introduces Richard Holiday, accompanied by Alicia Atout. Hammerstone shows up and interrupts Holiday. Alicia Atout throws water in Hammerstone’s face and then Hammerstone accidentally knocks out Ceasar Duran while trying to throw a shot at Holiday.