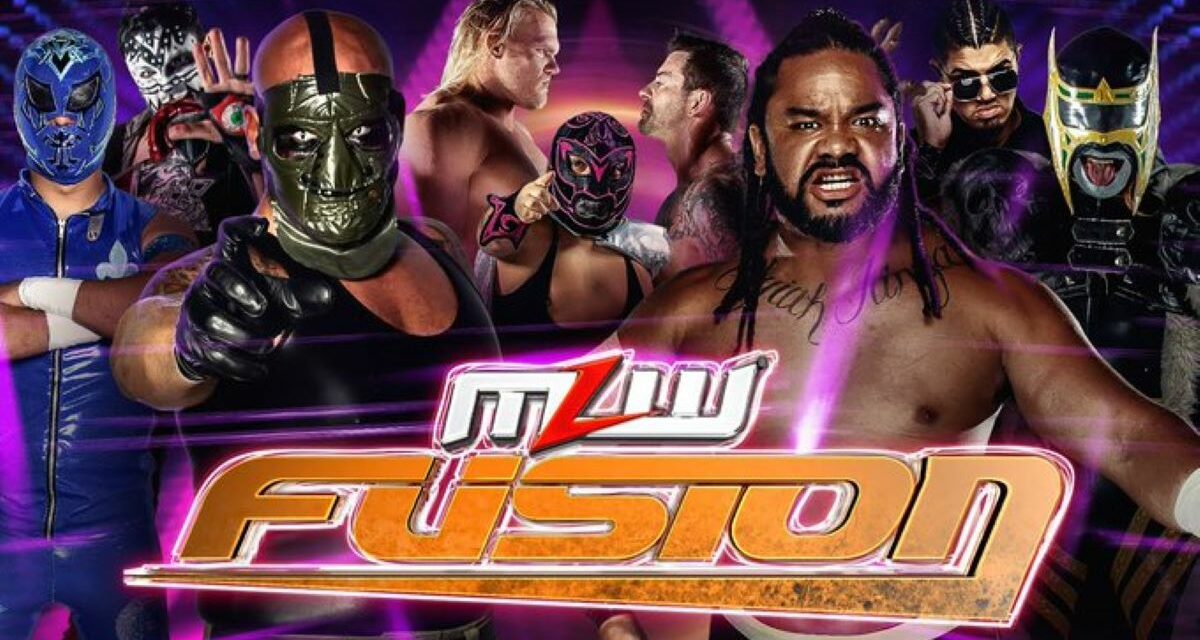 As Contra Unit is now broken apart in Major League Wrestling, it is the a match made in hell as The Black Hand of Contra Unit, Mads Krügger, faces down the Samoan Werewolf, Jacob Fatu, for his “betrayal.”  Who of these two behemoths will come out on top?

We head back to Gilley’s in Dallas, TX. Rich Bocchini and Joe Dombrowski have the call. Before we head to the ring, in the back is Emilio Sparks with EJ Nduka, and he asks The Judge what the status is with him and the MLW champion, Hammerstone.  Nduka says he and Your Boy Hammer are good.  Sparks persist in wanting more, even putting a hand to the big chest of Nduka to stop to get more info, and The Judge pinks up Sparks, and says plain and clear, he and the champ are square.

Me, personally?  The first response is all I need, and I woulda quit while I was ahead.

But we now head to the First Match, and it’s a…

A quick note:  There’s too much action in this match, and it’s next to impossible to give a decent blow-by-blow account, but I’ll give some notes on the big moments that occurred in the ring.

First, Mr. St. Laurent enters the ring and reveals the prized athlete, a big name in professional wrestling, and he introduces…. MicroMan. This is the smallest luchador I’ve ever witnessed (Seriously!  Dude was less than two feet tall.  He looked like Mario before he got the mushroom to make him bigger…which you should check the T-shirt at MLW’s website that is like the Super Mario design.  Better buy it, before Nintendo cease and desists them from making it).

The match itself is just a glorified Texas Tornado match, with all the luchadors flying in, around, and outside the ring.  Some of the action had the rudos like Arez, Negro, and Medina try to work over MicroMan, making him a Mini in Peril.  At one point, Arez gets MicroMan in an electric chair, as Medina and Negro jeers the miniscule technico.  But Aramis and Dragon come from behind, superkick Medina and Negro, and double superkick Arez, making MicroMan use the momentum to flip him in a huracarrana position.

MicroMan hits Medina with a spinning huracanrana, and another to Negro on the outside of the ring.  Arez underestimates the mini, and gets caught in a Micro facebuster, but Negro comes from behind to cover MicroMan, but Aramis breaks the ref count.  Then Aramis nails the Desnucadora de Muscatero on Medina, but Arez sends his rival out of the ring.  Aramis goes with a tope to outside on the other rudos.  Now, Dragon heads to the top turnbuckle and delivers a 450 splash to Medina, and then goes to the other side of ring and hits a diving splash to all men outside the ring.  MicroMan goes to finish Medina with a mini Vader bomb to pin El Intocable for the win.

Your Winners via Pinfall:  Aramis, El Dragon, and MicroMan

After the match, Bocchini tries to interview Medina, but he snaps and shoves him hard out of the way, along with the ref.

5150 in da club with some ladies and Hennessy, naturally. Rivera and Slice Boogie can’t help but notice talk about how Von Erichs didn’t show up in the house.  Anyway, the tag champs will still be living that high life.

It was announced that nZo’s suspension is over, and KC Navarro is cleared for ring action.  He’ll face nZo in a Grudge match during SuperFight, but next week he’ll face Ho Ho Lun in competition.

Alex Kane and Calvin Tankman have a point/counterpoint interview.  Kane says he’s a champ, and Tankman whines a lot. Tankman ain’t taking this lightly and will mess up the Openweight champion, plain and simple.

We go backstage, where Emilio Sparks tries to talk to Gino Medina.  El Intocable shoves him out of the way, goes to pummels Aramis.  As refs and security are trying to break up the melee, they finally pull off Medina, and we see his hands are stained red, and there is a shot of Aramis lying in a pool of blood.

We get dueling interview with Davey Richards and Hammerstone hyping up the MLW Heavyweight title match for SuperFight in Charlotte.  Hammerstone knows he’s in the fight of his life and need to try to put away The American Wolf early.  Richards respects Hammerstone, and he won’t stop until the belt is around his waist.

But now is the time for the Main Event…

As Fatu comes to the ring during the intros, Krügger comes to greet him at the ramp and the men brawl before he bell rings, and The Samoan Werewolf goes to work on the Black Hand. Fatu rushes at Krügger, but he backdrops the Samoan into the crowd, and he lands hard on concrete floor.  Krügger follows and continues the assault into the crowd in Gilley’s.  Fatu manages to get up top a beam, and hits a twisting Moonsault to Krügger.  Fatu sends The Black Hand to the guardrail, and he clotheslines him, making Krügger somersault.  Krügger and Fatu gets back in the ring, and now the bell rings to start.  Fatu is on the top turnbuckle, but Krügger gets up top and stops his momentum.  He launches Fatu with an avalanche fallaway slam.  Krügger rushes, but Fatu gets a super kick, and then transitions to a spear to break the big man in half.  That leads to…

Ads (yeah, you know I feel about this.)

We come back Fatu chopping and head butting the Black Hand, but Krügger answers with a choke slam.  The Samoan Werewolf then returns the receipt with a pop up Samoan drop to a cover, but gets a two count.  Fatu attempts a springboard Moonsault, but Krügger catches him in mid-twist.  He proceeds to get the goozle to a backbreaker on Fatu.  The Black Hand is methodical in dismantling Fatu.  He sends the Samoan to the outside, and hits the ropes and Krügger leaps from the ring to Fatu on the floor, a la The Undertaker.  Krügger then summons Ikuro Kwon from the back.  He props up Fatu, and prompts Kwon to finish him off.  He goes to deliver the kick, but Fatu ducks and Krügger gets the worst of it.  Now, Fatu gets the Best Moonsault Ever to Krügger, and gets the leg to cover for the one, two, and three!

Your Winner via Pinfall:  Jacob Fatu

After the match, Krügger is mad and attacks Fatu from behind, and they brawl some more, with Fatu launching to Kwon and Krügger. Security comes out and they are still not able to stop the carnage.  This feud is far from over.

We go to an office, and Cesar Duran is on the phone with Karli about their evil plans. All of a sudden, Richard Holliday and Alicia Atout step in, and wants a word with El Jefe.  Duran agrees, and Holliday says he held up his end in dismantling Contra Unit, ensuring their team won in War Chamber. Now Holliday wants the title shot that was promised.  Duran says the contract for the MLW title between Richards and Holliday for SuperFight is signed…but hints (broadly) if an injury took place that would prevent it from happening (hint, hint), then an alternate may fight in place. Holliday finds the idea interesting, as the show goes to black.

This was the best match I’ve seen by Krügger to-date.  He still acted like a big man, but utilized his offense perfectly, like The Deadman of old.  Now, if MLW can do something about his promos, he’ll end up being a force to reckon with.

The trios was a lot to absorb, but in a good way.  The buildup to Richards/Hammerstone continues to be a great match.