SmackDown ups its game ahead of Royal Rumble 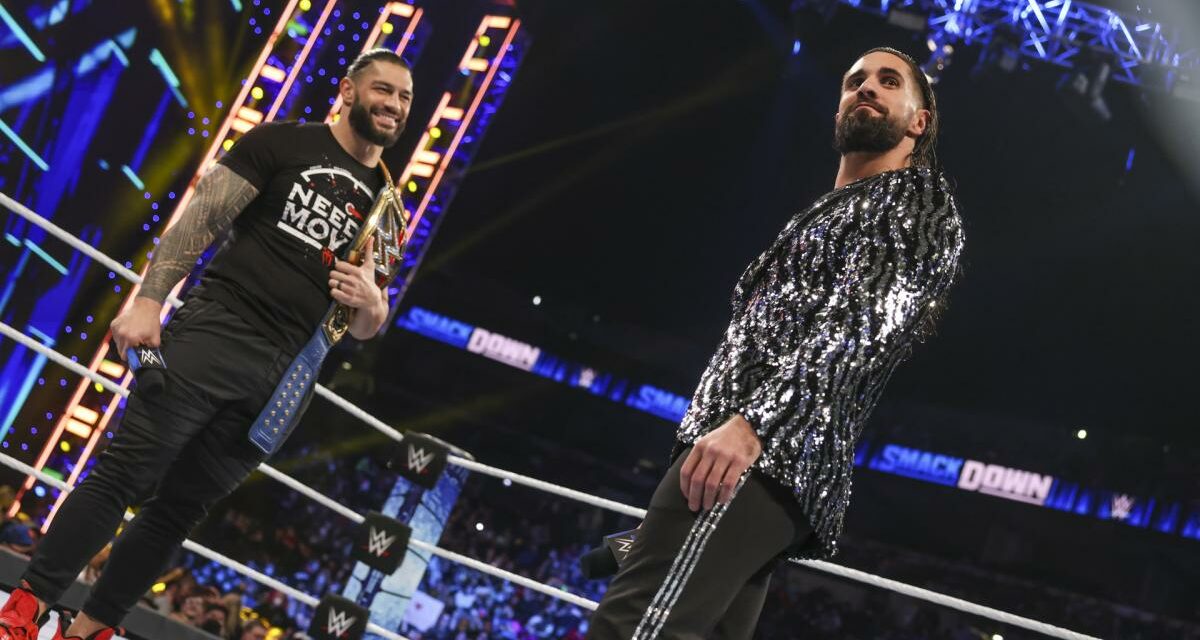 There was a time when you’d tune into SmackDown as the “wrestling” show of the WWE, and tonight felt more like that than it has for a while. Plenty of good matches and a fine (if predictable) build between Roman Reigns and Seth Rollins round out the Friday night action.

Jimmy and Jey Uso strut to the ring toting their championship belts and feeling pretty good about themselves. They celebrate their victory over the New Day last week, while also sending a little praise to their longstanding rivals. New challenges away, though, as the champs have a grand time introducing four teams vying for their shot at belts. It’s pretty funny. They also deliver a couple of cheap shot kicks to Erik and Mansoor before scampering out of the ring.

We come back from commercials and join the match in progress and Mansoor is taking it to Carrillo before tagging his partner to continue the assault. Mutliple tags follow, and suddenly Erik is in the ring with Garza as he rips off his pants — but Shanky tags himself in so Garza shrugs and exits the ring still holding his trousers.

The two big guys do battle, with Shanky quickly gaining the upper hand, before he tags in and out with Mahal to keep Erik in the corner. Eventually the Raider slips away and brings in Ivar, who knocks the other two teams to the floor with a pair of double clotheslines before dodging a Shanky clothesline and tagging in Erik again to bodyslam him onto their opponent.

An unsual pairing forms as Cesaro and Mahal set up to bring Ivar down with a double-superplex and, oddly, Erik helps them out. I guess figuring it was going to happen anyway, he was trying to add some force to the other two and their landing? Giving us a chance to think that peculiar strategy over, we break for another commercial.

Returning again, it’s Mansoor and Carrillo at it once more, so I guess they drew the short straws for wrestling during the ads tonight. After Cesaro tags in and shows off a Samoan Drop for the Usos, Ivar tags in off the Swissman — only to get taken down and taken for a swing (one rotation only, mind you). Suddenly, tags don’t mean anything and everybody runs in to take shots on each other in turn before, finally getting back to the legal men, Ivar gets the pin on Carrillo.

Winners by pinfall and NEW #1 Contenders: The Viking Raiders 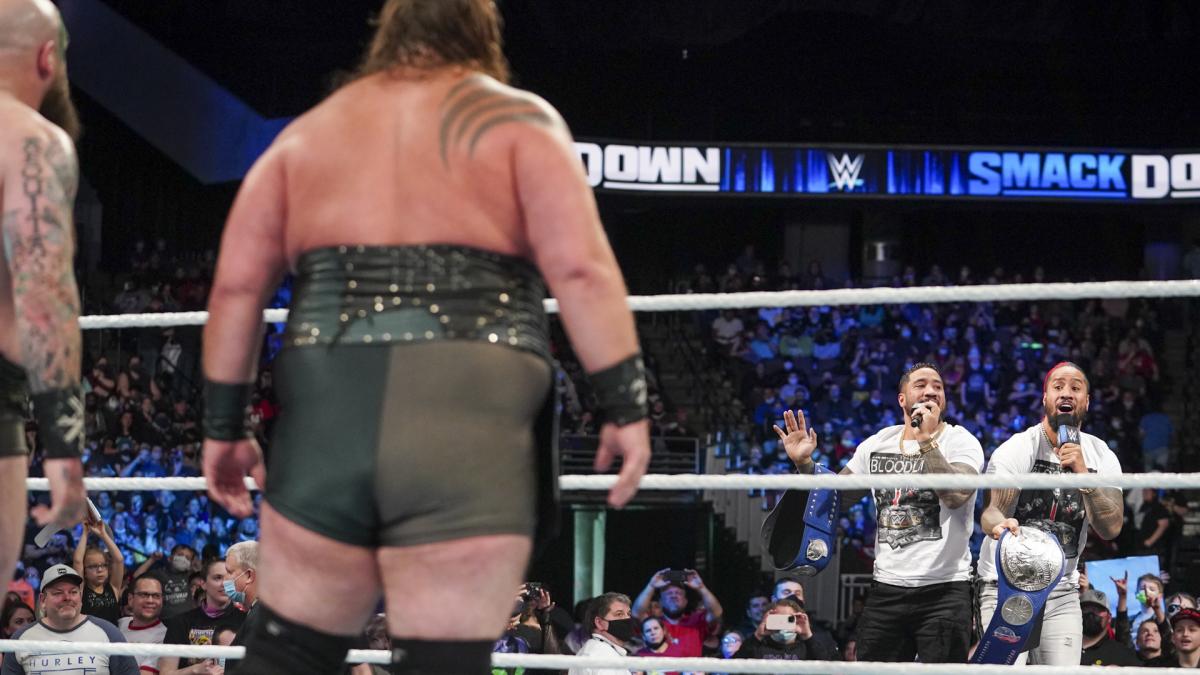 The Usos get a good look at their new challengers. Photo: WWE

Backstage, Naomi and Sonya Deville continue their bickering, with Deville threatening to fine, fire, or remove her from the Royal Rumble. Not much to see here.

Ringside, Sami Zayn spouts his conspiratorial theories and is excited for his chance at redemption now that he has a match for the Intercontinental Championship coming up sometime. Most importantly, though, Zayn vows to out-Jackass Johnny Knoxville with his own spectacular stunt.

He introduces the segment as “In-Zayn” and rushes backstage, returning in a shopping cart pushed by a couple of future NXT 2.0 wrestlers, sporting a helmet and elbow pads, and suddenly having second thoughts about rushing up a ramp to launch into the ring. He commands his helpers to stop at the last moment to inspect the ring. Oh wait, there’s an X on the other side of the ring. There’s no way he was going to make that jump. 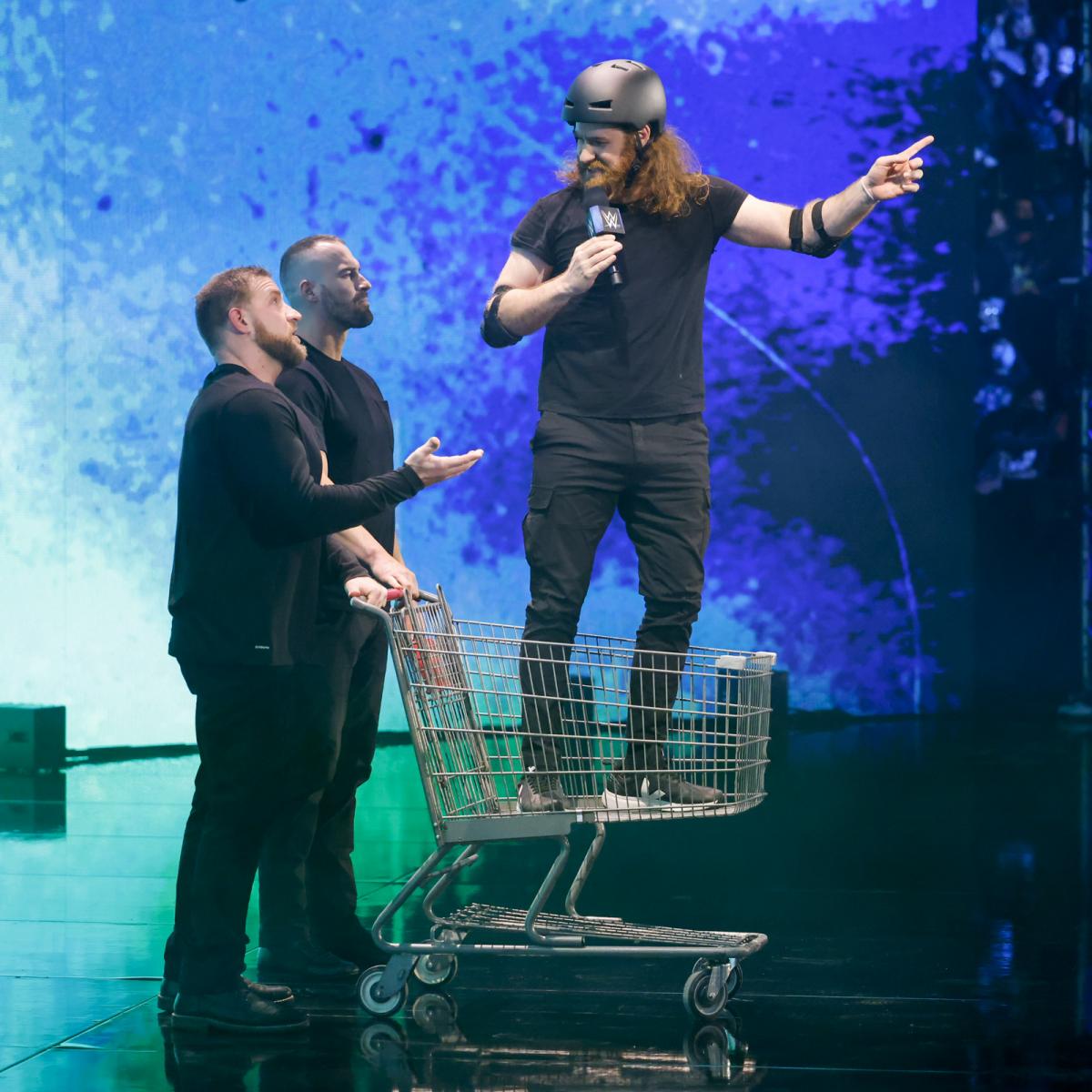 Zayn is very nervous about this stunt, but you can’t convince me that a ladder match isn’t more dangerous. Photo: WWE

It doesn’t matter, as Rick Boogs and Shinsuke Nakamura jump Zayn, with Boogs tossing Zayn over the ropes and right into the X.

Backstage again, Megan Morant talks to Aliyah about her upcoming singles debut against Natalya. Aliyah is nervous and excited, and even moreso after Natalya slides in beside her to brag about holding three Guiness World Records. Aliyah accidentally offends her by saying she didn’t know those records were still a thing.

We go to commercial, and when we come back Natalya is still with Megan Morant pouting about how important the Guiness records are. She vows to gain her fourth world record by beating Aliyah in less than 3.8 seconds.

Before the bell rings, Natalya stacks the odds in her favour to make good on her vow by attacking Aliyah all around the ring. The ref checks in Aliyah and is about to cancel the match when Aliyah convinces him that she can go on.
The bell rings and Aliyah immediately rolls up the oddly unsuspecting Natalya to win the match and set a new record at 3.17 seeconds.

Michael Cole is next in the ring, talking to the returning Lita about her spot in the Royal Rumble. Lita lists off her accomplishments, but explains that she didn’t get to compete a Royal Rumble in her day because they didn’t have one (but, um, they did in 2018 when Lita took part in that one).

Before we listen to her try to spin that logic any more, out walks Charlotte Flair — very akwardly and uncomfortable-looking in her latest robe-inspired bodysuit. 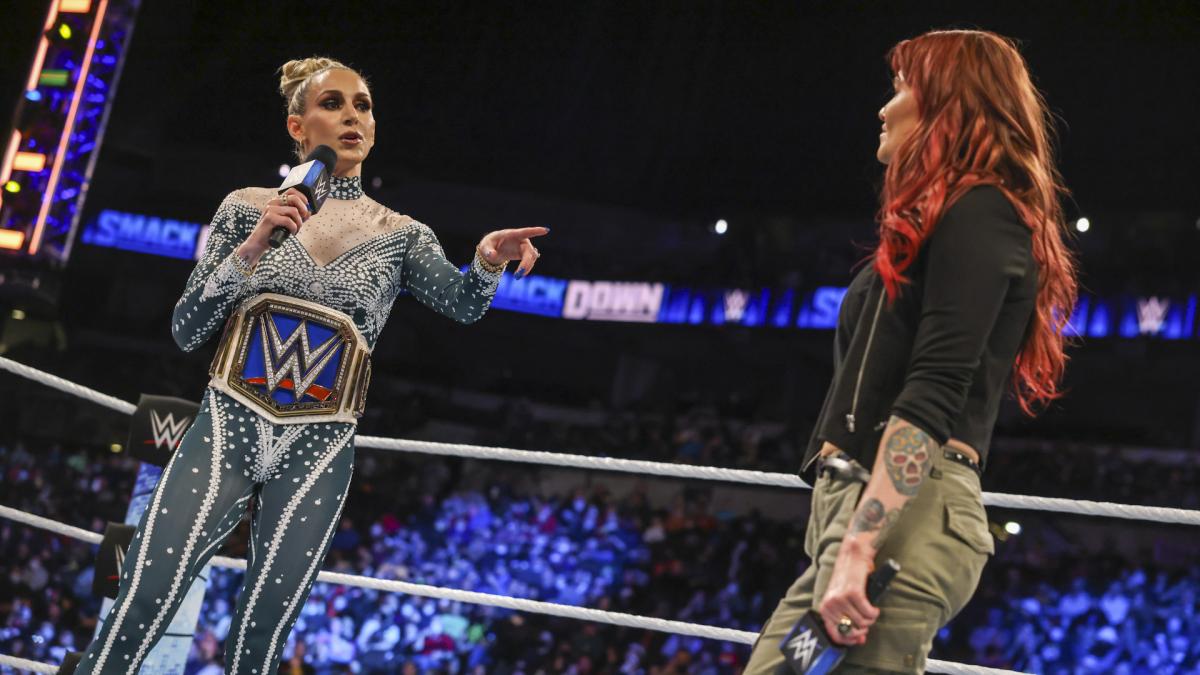 Not sure who’s in charge of the old Batman camera angle in tonight’s photo gallery, but I like it. Photo: WWE

The champ says that she’ll bring an end to Lita’s dream return by eliminating her, just like when she beat Trish Stratus at SummerSlam in 2019. Lita’s heard enough, and a kick to the gut followed by a pretty weak-looking Twist of Fate pleases everyone but Charlotte.

Next up on Morant’s backstage interview tour is Sheamus, still lamenting the injury to his protege Ridge Holland, and he plans in exacting revenge against Ricochet for the injury.

You’d think Ricochet would be bouncing around and off of Sheamus from the get-go, but he actually employs an extended side headlock for an opener. Soon, though, he sends Sheamus over the ropes with a hurricanrana and follows with a twisting splash. That’s more like it. Sheamus draws him out to the other side of the ring and uses the underside of the ring to catapult Richochet’s neck into the steel frame before a commercial break. 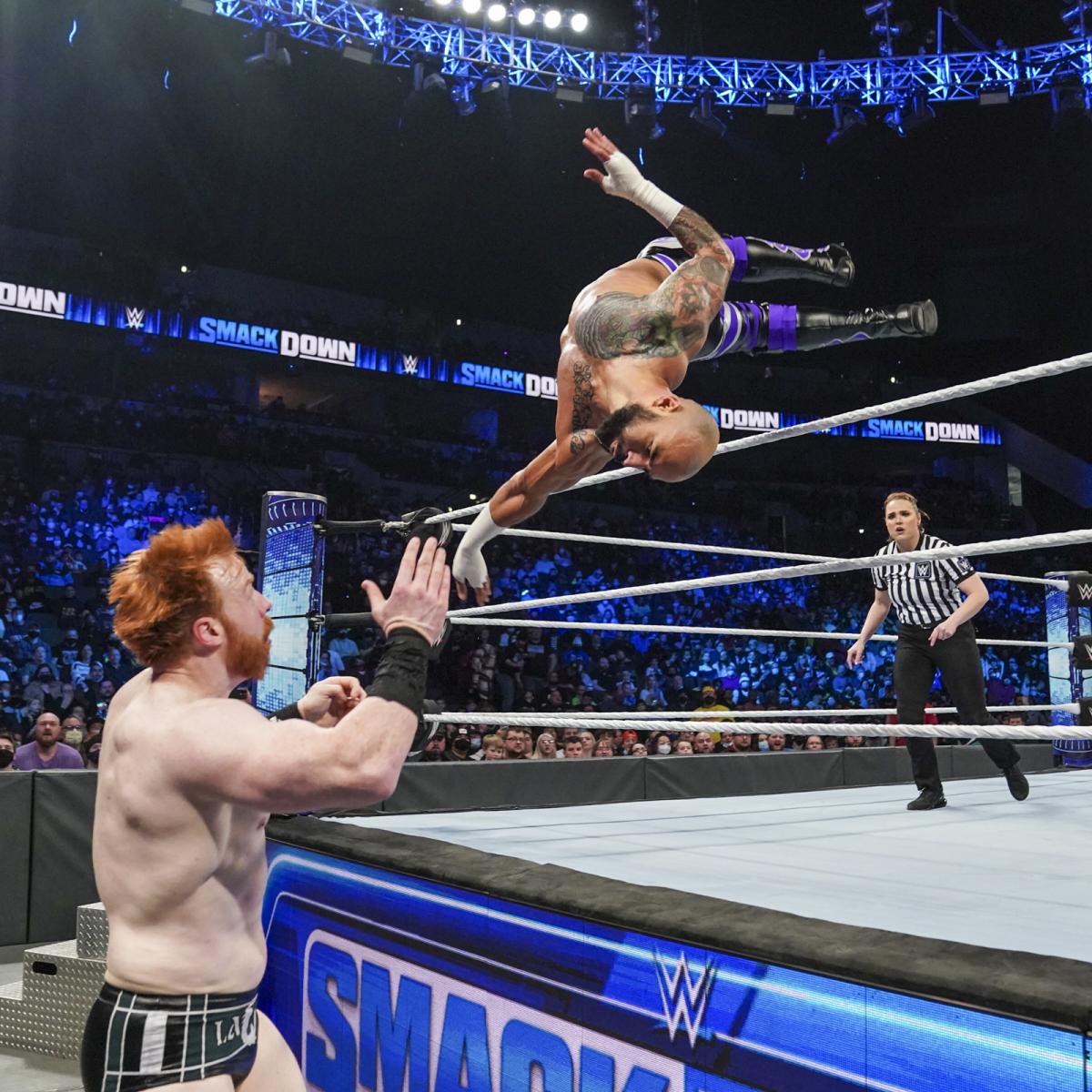 I guess all that twisting adds force to the impact? Or just looks cool. Photo: WWE

Back once again, Richochet hits a springboard crossbody in the ring and follows up by dodging a Brogue Kick and attempting a Shooting Star Press, which Sheamus dodges. Ricochet fights out of what was looking like an avalance Irish Curse and instead brings Sheamus down from the ropes with a powerbomb for a two-count.

The end comes as Ricochet gets a little too fancy in doing a handspring return off the ropes, right into a Brogue Kick.

Once more with Deville and Naomi, Adam Pearce inserts himself and says that Naomi deserves another opportunity at Flair, and will get one next week.

Before the match begins, Kofi reads a royal proclomation, regrettably announcing that a calf injury will keep King Woods out of the Rumble — but that Kofi is in.

After the bell, Moss immediately powers Kingston into the air, but Kofi sends him sprawling over the ropes before launching himself on top of both happy buddies going into commercials.

We return to see Moss pummeling Kingston in a corner, but Kofi escapes and hits dropkick after dropkick and chop after chop before setting up for Trouble in Paradise. Corbin distracts him long enough for Moss to get away, so Kingston tries for an S.O.S. which Moss powers out of and counters with the Punch Line for the win.

That leaves Roman Reigns and Seth Rollins to close out the show. The announcers make sure to announce that this is the one time a year that you get to see Raw and SmackDown superstars go head-to-head … no, wait, that’s Survivor Series.

Rollins offers up two-thirds of a Shield fist-bump, which Reigns says is beneath him now. Rollins also wants to talk about his track record of success against Reigns, but the champ deflects that too and says he’s in God-mode now. He says that Rollins is not on his level, and if he’d been able to choose a megastar from Raw, he would have picked Rollins’ wife.

The Usos attempt an attack from behind, which Seth dodges before strutting his way back up the ramp, claiming a victory in this promo battle.

A decent show with a focus on good matches. The confrontation between Rollins and Reigns was fine, and it’s certainly a lot better than having Rollins win a Championship Contender’s match against Reigns to get his shot at the Royal Rumble event.