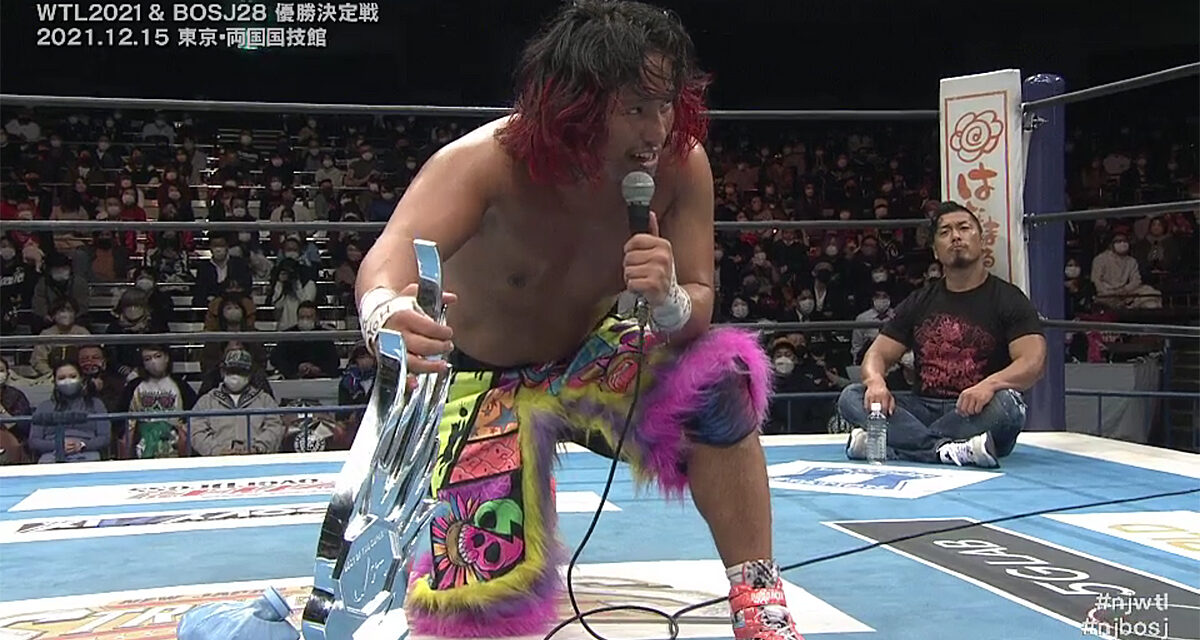 Not only were the Best of the Super Juniors and World Tag League 2021 tournaments settled tonight but New Japan tipped its hats many times throughout the show as to what it has planned for Wrestle Kingdom.

It will be ‘Time Bomb’ Hiromu Takahashi versus El Desperado for the IWGP Junior Heavyweight Championship at Wrestle Kingdom. Takahashi beat Yoh to claim the Best of the Super Juniors title for the second year in a row and for the third time in his career.

Takahashi defeated Yoh in the first match of the tournament in under four minutes. With Yoh on a seven match winning streak since then though it took a lot longer for Takahashi to beat him this time. Takahashi pinned Yoh after a 38-minute war with a Time Bomb 2. It was the longest final in tournament history.

In other news, YOSHI-HASHI and Hirooki Goto defeated the House of Torture team of Yujiro Takahashi and Evil to win World Tag League 2021 and an IWGP Tag Team Championship match against Zack Sabre Jr. and Taichi at Wrestle Kingdom.

Hashi kicked out of Yujiro’s Pimp Juice DDT so Yujiro went for his cane as back up. Goto jumped in taking out Yujiro, his cane and Dick Togo on the apron. Evil was next. Goto tossed him into an exposed turnbuckle and spiked him with a GTW. A GYW and a Shoto by Hashi and Goto had Yujiro pinned…but…Togo pulled the official out of the ring.

The match broke down into chaos. Evil hits Goto in the stomach with a chair. Togo choked Hashi with his garotte as Evil does the same with a steel chair to Goto.

Hashi and Goto’s Chaos pal Tomohiro Ishii hit the ring punching the steel chair into Evil’s face. He suplexed Togo out of his shoes. The Stone Pitbull punched Togo in the face throwing him out of the ring. Ishii crushed Evil with a head butt and a clothesline. Ishii screamed at Hashi and Goto to finish Evil off as he helped the official back into the ring. Goto and Hashi pinned Yujiro with a modified Shoto to win the tournament. 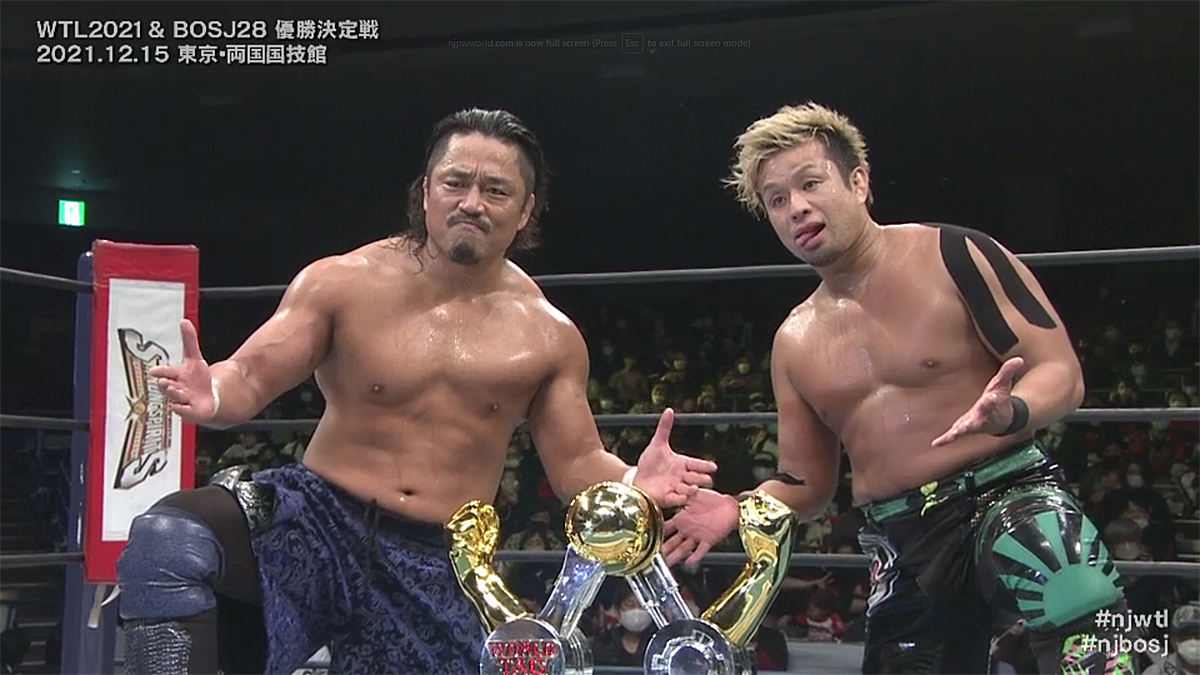 Katsuyori Shibata was also at the event. He announced that he has a match set for January 4th at Wrestle Kingdom but didn’t go into details about who he may be facing.

Wrestle Kingdom will take place on January 4th and 5th, 2022, at the Tokyo Dome and January 8th, at Yokohama Arena.

Douki wins the bout for his team with his Italian Stretch #36 submission. 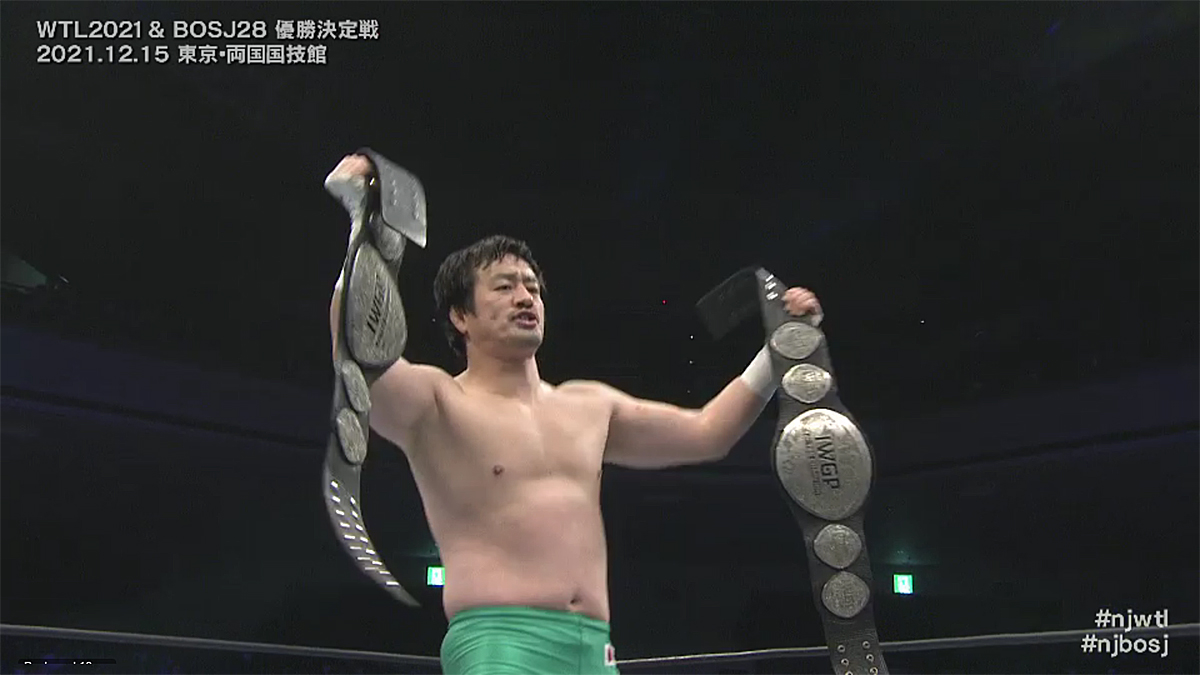 Oiwa has Ishimori in a Boston Crab. Phantasmo gives him a Sudden Death super kick. Ishimori pins Oiwa. Perhaps setting up an IWGP Junior Heavyweight Tag Team Championship title match against Tiger Mask and Robbie Eagles, Phantasmo and Ishimori attack Tiger Mask after the bell. Phantasmo kicks the Young Lion again with his loaded boot. As he prepares to nail Tiger Mask, Robbie Eagles hits the ring to try and make the save. Phantasmo kicks Tiger Mask in the stomach. Ishimori and Phantasmo set up Eagles for the same but Ryusuke Taguchi comes racing in to put a stop to that. Eagles and Mask double team Ishimori with a pair of kicks.

On the floor, Phantasm insists those championships belong to him and Ishimori.

Taguchi suddenly turns on Tiger Mask and Eagles clobbering them both with hip attacks. The crowd is stunned. Taguchi, without a partner, poses with the belts. 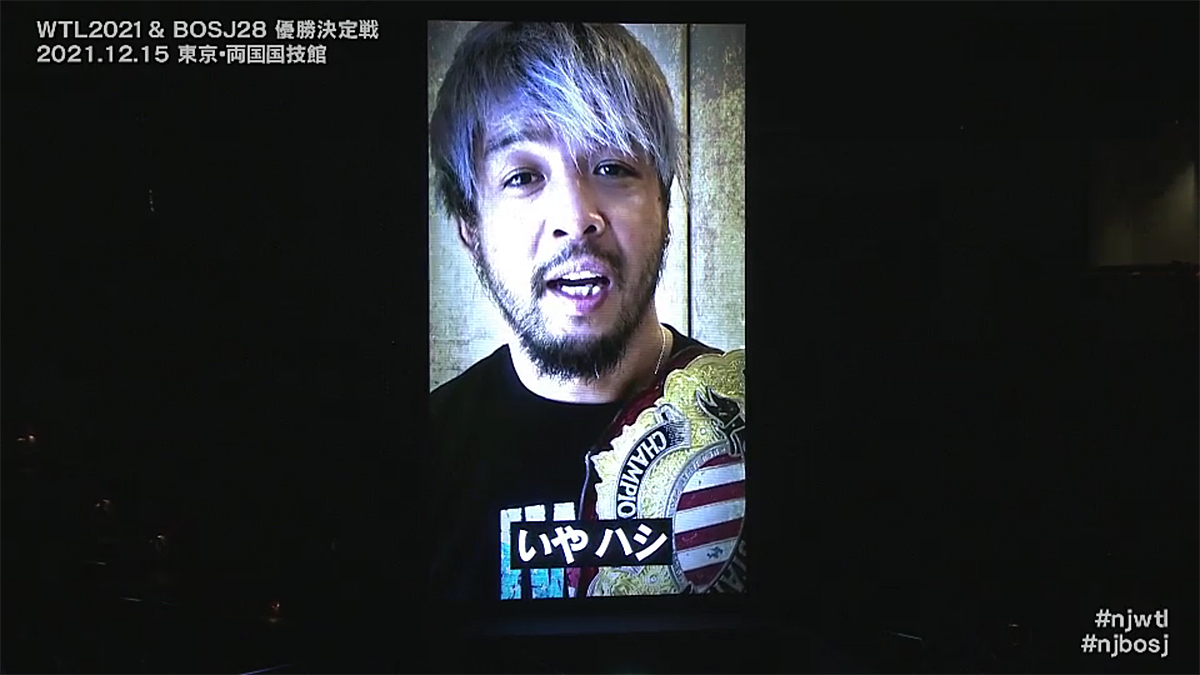 Chase Owens goes to finish off The Ace but Tanahashi unceremoniously rolls him up for a pin. After the match, Kenta appears on the big screen challenging The Ace to a No DQ match for the IWGP United States Heavyweight Championship. The Ace accepts the stipulation and the match.

Sanada and Tetsuya Naito versus Great-O-Khan and Jeff Cobb

Cobb catches Naito as he is about to unleash a jumping DDT. Naito flips over Cobb with a hurricanrana for the roll-up and pinfall. An angry Cobb blisters Naito with haymakers. He tosses Naito off the ropes for a Tour of the Islands. Naito grabs the ropes. Cobb charges. Naito pulls the ropes down on him. Cobb falls to the floor. Naito does his tranquillo pose on the canvass after running the ropes. Enraged, Cobb runs back into the ring. Naito slides out before any harm can come to him. Cobb chases Naito and Sanada up the aisle into the back.

BUSHI and Shingo Takagi versus Robbie Eagles and Kazuchika Okada 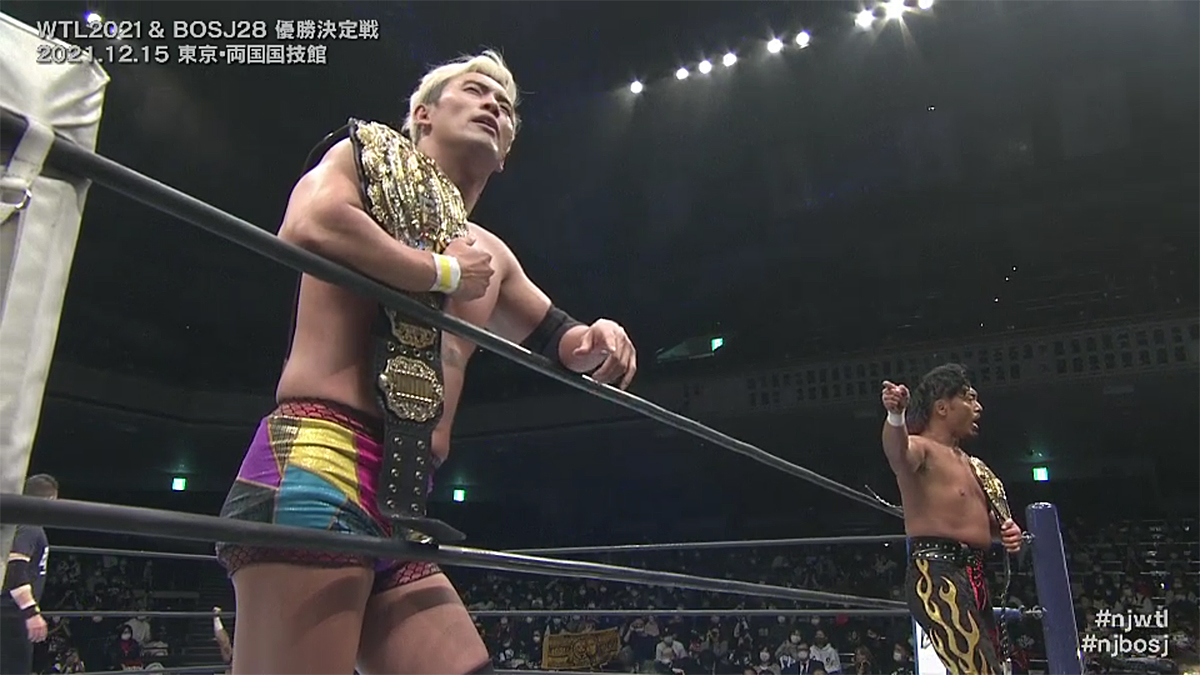 Okada and Shingo show off their respective belts. Courtesy: NJPW.

Hiromu Takahashi versus Yoh – BEST OF THE SUPER Jr. 28 FINALS