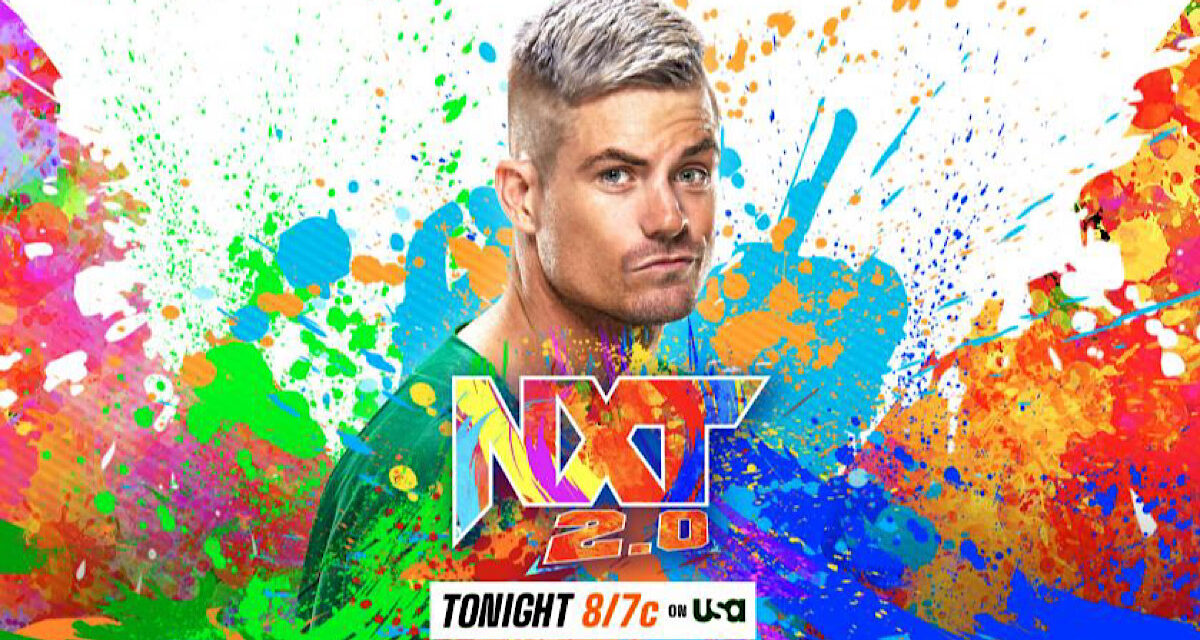 A former reality television star turned professional wrestler was ejected from the men’s locker room on tonight’s episode of NXT. It wasn’t The Miz experiencing some deja vu, it was rookie prospect Grayson Waller. After a dastardly attack on Johnny Gargano last week, Waller basked in the hatred and the screen time — it was a whole lot of screen time.

Succeeding Grimes and Hudson’s hair-versus-hair match is no holds barred, where garbage cans and chairs are introduced immediately. Speaking of garbage, Hudson is needlessly wearing the silly wig and headgear combo, showing that even NXT 2.0’s best rivalry can’t go without comedic relief. He positions a poker table in-ring during picture-in-picture, thereafter slamming Grimes through it with a powerbomb. “It’s no holds barred, pal” says commentator Wade Barrett as Hudson brings out hair clippers. But Grimes escapes, delivers The Cave In through a chair, and secures the victory. The winner removes the wig revealing Hudson’s shiny dome — balder than King Neptune. And with that, Grimes continues his tradition of turning ridiculousness into richness.

Cora Jade’s backstage interview is interrupted by Dakota Kai, and tonight, they compete one-on-one. There isn’t a single NXT 2.0 interview that runs smoothly it seems.

Josh Briggs, Brooks Jensen, Kayden Carter, and Kacy Catanzaro attend a country music festival together; for those familiar with Briggs before NXT, the drastic switch from metal to country is pretty funny.

The man himself, Grayson Waller, makes an entrance to heartfelt boos. “You can never fail if you bet on yourself,” he says, mocking Johnny Gargano. The audience responds with the family friendly “shut the hell up” chant as Waller shows selfie footage of last week’s attack. Waller targets Wade Barrett: “This isn’t 2010. I don’t care what you think of me.” He then chastises Gargano’s friend Vic Joseph, ending with this: “I don’t need friends in this industry. The only thing I need is Grayson Waller.” Though very dastardly, Waller is amazingly confident — and has great fashion sense by the way.

Nile is backed by Diamond Mine’s Malcolm Bivens, who excitedly watches her flex, kip-up, push-up, and beat up on Miller. Commentary doesn’t call it, but Nile wins with a Dragon Sleeper — or simply “a neck crank.”

Xyon Quinn is interviewed backstage and actually finishes his message towards Elektra Lopez. But not so fast, because Robert Stone and subsequently Von Wagner take the screen. The chain reaction luckily stops at three.

Rumored as the next big thing, Harland makes his in-ring debut. He endlessly crossfaces Raaj before delivering an underwhelming slam for the victory. He continues with a post-match attack until officials escort him away. Harland is definitely a thing — maybe not the next big thing, but a thing. After commercial, he throws poor “coach” Brian Kendrick down a flight of stairs, which ultimately results in a visit to the hospital.

“Lemme talk to ya,” says LA Knight. He enters the building cutting a promo on Grayson Waller, who attacked Johnny Gargano because Knight stole his date. So, basically, Knight is responsible for Gargano’s attack quite honestly.

The NXT Women’s Champion Mandy Rose sits next to Wade Barrett on commentary. “Hey, simping ain’t easy,” he says. Meanwhile, Kai targets Jade’s injured left shoulder throughout the match until the latter’s comeback is initiated. Kai recuperates with running boots and pulls out a shovel, but pushback from the referee lets Jade get the quick roll-up victory. Raquel Gonzalez fights Kai away, but Gigi Dolin and Jacy Jayne of Toxic Attraction appear. Rose blindsides Jade, and the Women’s Champions stand tall.

The first in-person appearance of Tiffany Stratton is with Grayson Waller: “My daddy says he doesn’t like you.” Afterwards, Io Shirai chews out Waller in Japanese to his amusement. WWE doesn’t stop with stereotyped Asian comedy, and it doesn’t sit right.

When D’Angelo’s music hits, he doesn’t receive the standard pop. It’s quite literally an audible “ayy!” It’s a battle of NXT 2.0’s most over-the-top characters, the difference being that D’Angelo’s career has legs. Chase physically has legs, which assists in his offensive string, “but you can forget about it” as D’Angelo delivers his finisher for three. He grabs the microphone, but Pete Dunne interrupts to perhaps take his stolen mouthguard back. D’Angelo tries some funny business, but Dunne responds by snapping his fingers.

Bron Breakker kicks Grayson Waller out of the men’s locker room. The Miz comparisons are right there!

Boa has inherited Mei Ying’s powers with face paint included. He isn’t invincible though, because Enofe gets some nice offense in. Solo Sikoa is watching on backstage, but Boa’s spinning heel kick puts it away.

Grayson Waller drives off in LA Knight’s car — seemingly with Tiffany Stratton sitting passenger? Opening up the frame, Knight is grounded on the concrete after Waller’s latest attack.

Despite being reduced to one-liners and blazers, Kushida is still an incredible technician. He’s beaten down by GYV though, but Ikemen Jiro receives the hot tag. Meanwhile, the Creed Brothers are onstage, and their presence lets Jacket Time hit a double-team dive onto a distracted GYV. In-ring, an assisted Swanton by Jiro gives his team the victory.

Malcolm Bivens and Roderick Strong are met backstage by Trick Williams and Carmelo Hayes. Williams finds a signature Dexter Lumis drawing that depicts him cowardly running away. But conversely, Williams and Hayes are getting close to tonight’s main event, standing atop the balcony.

Strong matches are poetry in motion, and tonight, he has an interesting new dance partner. He controls throughout picture-in-picture, but Breakker’s impressive agility and strength lends him the comeback; Breakker’s hurricanrana in particular is insane. Strong recuperates with trademark chops and forearms, hits a superplex, and delivers a powerbomb for two. But Breakker hulks up to give Strong the finishing slam for three.

Before show’s end, the NXT Champion Tommaso Ciampa attacks the victor. He delivers Willow’s Bell onto the championship belt as the lower third signals the end.

In-ring, the opening and closing matchups of Grimes-Hudson and Strong-Breakker really delivered. Though the middle portion is habitually a drag, the segments featuring Grayson Waller made up for it. It happens once in a blue moon, but an up-and-coming heel is actually capitalizing off the veteran rub. It’s upwards for Waller, who is genuinely somebody with moxy.