AEW Dynamite: Punk and MJF heat up their feud, 8-man tag is more than an appetizer 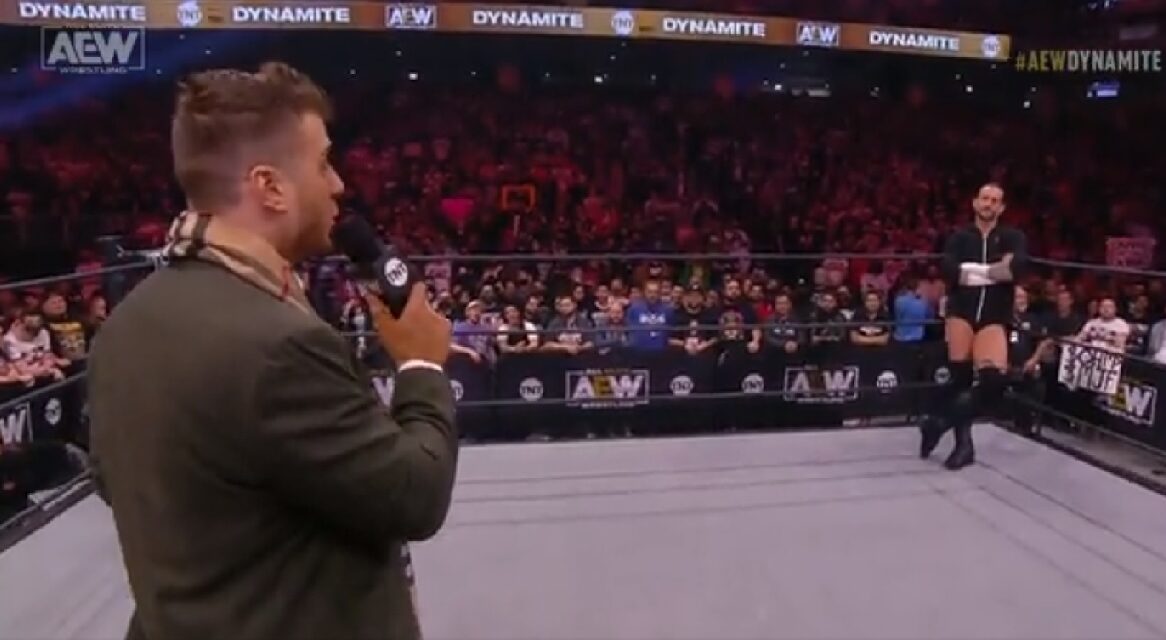 It’s the night before Thanksgiving, and you know what that means. For lots of people, partying, or so the stats say. But for you, the loyal professional wrestling fan, it means AEW Dynamite, naturally. We’re getting a special treat to start things off, because the show is live from Chicago, and the Second City’s favorite son is going to have his match first.

Except we’ll have to wait, it seems, because someone thinks it would be funny to interrupt him … and that someone is MJF. He seems to be of the turnabout is fair play mind set, seeing as Punk interrupted him last week. The fans want him to shut up, but he ignores them and claims Punk hurt his feelings, similar to when CM “took his ball and went home like a little bitch.” MJF brings up the famous “Pipe Bomb” promo and says that was Punk’s best moment, but every MJF moment is the best. He also says Punk look like a meth addict before getting to the heart of the matter: MJF appears offended that Punk never mentioned him in the list of all the AEW talent he wanted to wrestle. Or maybe he was just scared about going head to head with MJF on the mic. To the delight of the crowd, Punk says he is disappointed in MJF and thought MJF stood for My Jealous Fan. Punk notes that MJF had all week to come up with zingers and went after the lowest hanging fruit, and even though he believes he’s doing revolutionary stuff, “you’re just a less famous Miz.” Friedman retorts that Punk is nothing but nostalgia, and goes on to suggest that CM has struggled to beat lesser competition and has spent his time in AEW “robotically kissing ass.” Whereas he used to be on the cutting edge, Punk might as well be out there now preaching “hustle, loyalty, respect.” Damn! Can Punk prove he deserves to be promoted as the number one guy, like he felt like he should have been before? MJF says he’s everything that Punk has always hated about the wrestling business and sneaks in a cheap shot on Chicago as well. His whole career, MJF says, he’s been nothing more than second best. There’s some truth in what MJF said, Punk admits, especially the fear of whether the people would still care. He goes on to say that when he looked at AEW, he went right for the heart of the promotion — except it was Darby Allin, not him. The only way MJF will be number one is if we wait long enough for Tony to have a daughter that he marries. Well that ramps things up again. Punk is ready to throw down, but MJF, as you might expect, is not. If every segment between these two is this hot, my flatscreen may melt before this feud is over.

The Factory is out at ringside to support their leader, but it doesn’t take long for them to be unceremoniously sent to the back. The announcers are understandably more focused on that opening segment than on this match. There’s also some talk about how he’s not as “explosive” at ending matches, but he manages to drop a big elbow on QT just fine, and after that, it’s Go to Sleep city.

Tony Schiavone gets some thoughts on momentum from Christian Cage and Jurassic Express, who are feeling damn near unbeatable. Jurassic Express is now the number one contending team in line for the tag team titles, and Cage says he’ll make sure they win this team. Elsewhere, 2.0 and Daniel Garcia barge in on Eddie Kingston and accuse him of not being hungry any more and not being able to help Jon Moxley. Hot coffee flies and fists are about to as well until people arrive to keep Kingston from tearing into the hills.

Man, Billy Gunn is becoming a regular in-ring combatant now at the age of … checks Wikipedia … 58. Impressive. There’s some announce team banter about being unable to tell the Bears apart in the first few minutes, but that hardly matters as the Gunn Club rolls to a short and clean win.

Sting heads for the ramp after the bell, and when Austin Gunn rushes him, Allin appears and lays him out.

Battle of the Belts, eh? It’s coming January 8 to Charlotte, and is some kind of special card but not a PPV, maybe? We’ll see.

Adam Cole says things have sucked recently, and they aren’t getting any better when Best Friends arrive. Cole is in no mood for them, and says he and Bobby Fish will shut them up.

Team Taz is trying to get Dante Martin to sign on the bottom line, but Lio Rush says they don’t want to be a part of it. Alas, he doesn’t speak for Martin, who signs a contract and leaves with Team Taz. Poor Lio.

The winner of this one has a tough test ahead of them, as undefeated Jade Cargill awaits in the semifinal. So unless AEW is willing to let Cargill take her first L, this might be all for naught. It’s a hard-hitting affair, to be sure, which suits these two wrestlers to a tee. Props to what sounds like a single person trying to get a Jamie Hayter chant going. Actually, never mind, because after the commercial break, plenty of fans are cheering for both wrestlers. Both Britt Baker and Rebel interfere, but their efforts backfire, and Rosa takes advantage to advance.

Alex Marvez wants to know what’s next for Chris Jericho. Before he can even get started, 2.0 and Garcia come through pretty pleased with themselves, but Le Champion has the verbal juice to put that to a halt. He warns them that if they ever interrupt him again, he’ll knock their teeth down their throats. Quite the rub for these three heels tonight.

Schiavone joins Baker and Rebel for a pre-Thanksgiving meal and has some bad news: Riho is getting a Black Friday Deal Match on Rampage and will get a title shot if she wins. Baker is mad, saying Schiavone has ruined both Halloween and Thanksgiving this year and will not be invited to any Christmas parties.

Punk isn’t the only hometown boy here tonight, as Cabana is also from the Chi. Not sure that’s going to help him here, but hey. The fans are behind him, at least. OK it doesn’t matter in the end, as you probably suspected.

Schiavone, who needs Thanksgiving dinner tomorrow to restore the calories he is burning running around doing interviews tonight, talks to Danielson. The American Dragon disses the fans a bit and claims he kicked some of Cabana’s teeth out. Looks like Danielson is going to just beat all of the Dark Order peeps in their own hometowns. Or not, because it’s time for some Cowboy S–t. It’s clear Danielson doesn’t want to have a match right now, but the AEW Champion still wants to fight, even offering his top challenger the first shot. Danielson slaps him, they throw some hands, but Hangman Page eventually stands alone in the ring.

As Jim Ross noted before the introductions, this is an eight-man tag with plenty of overlapping storylines. Plenty of time left in the broadcast too, so they should get to work a nice long match with everyone getting a shot to do their thing. This is not disappointing, and I’m not just saying that because I’m a Rey Fenix mark (though I am, admittedly). Tully Blanchard is lurking to perhaps intervene as well, as he does. It appears we’re going to come down the stretch to a clean finish one way or the other, as Pac is running wild and flying to the floor. That sets off a running string of signature moves, with Black dodging a Rhodes kick that takes out Pac. It was an accident, but it’s unclear whether Pac will know or care. With everyone down, Arn Anderson and Blanchard enter the ring, followed by … Jose the Assistant? Anderson and Blanchard both punch them, and the real combatants are soon back in. Another series of signature movies leads to Black and El Idolo joining forces to bend the rules just a tad and close things out in their favor, pinning Pac.

You don’t have to send the fans home happy just because it’s a holiday show. Americans, enjoy Thanksgiving, and we’ll see you in seven!

These two hours just flew by, and that’s meant as a compliment. If you’re going to have two wrestlers talk for 20 minutes to open a show, it better be a hot promo, and this one was scorching. Plenty of good to great in-ring segments followed, so this was an excellent Dynamite. Kudos to all and hopefully TK gives everyone a holiday break.