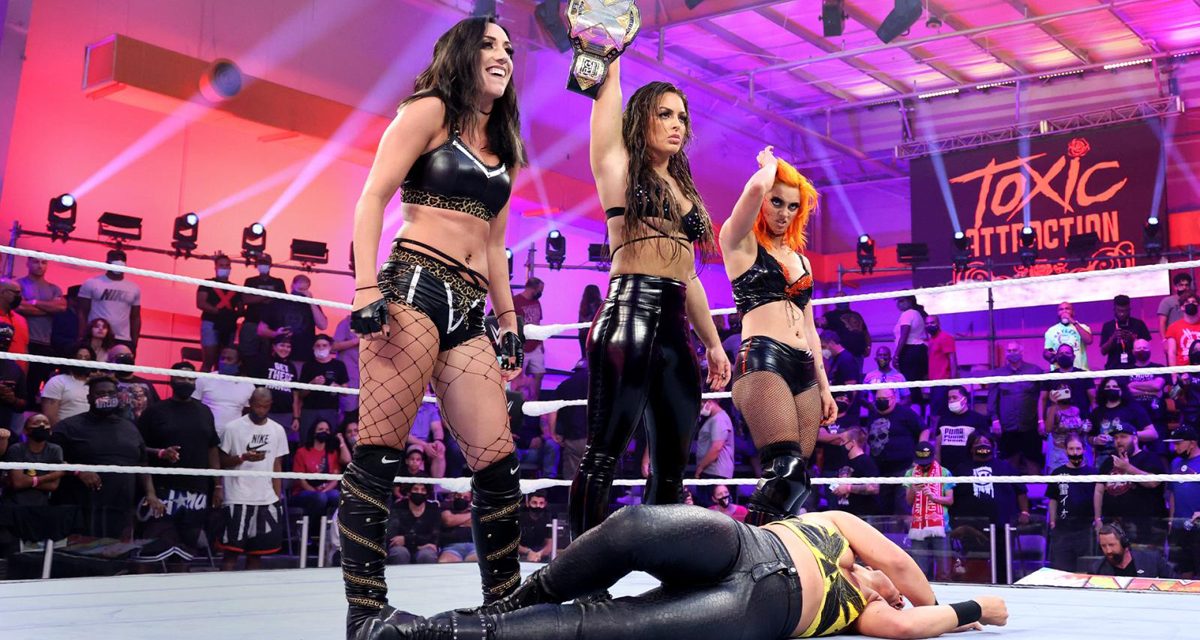 Tonight’s episode of NXT has been advertised as ladies night, which will feature three matches in the women’s division: B-FAB versus Elektra Lopez, Io Shirai and Zoey Stark versus Toxic Attraction, and Raquel Gonzalez versus Franky Monet.

Hit Row enters the ring to conduct a pre-show panel of sorts, hyping up tonight’s entire lineup before actually getting to business. The cheesy bars finally aside, B-FAB turns her attention to rival Elektra Lopez and initiates tonight’s opening no disqualifications bout.

Commentary needlessly mentions that this is both B-FAB and Lopez’s second NXT match ever, because the inexperience shines through. After an awkward-looking brawl, Hit Row and LDF members at ringside collide before commercial — a short palate cleanser. The ringside ruffians are escorted following break and replaced by tables, chairs, and kendo sticks — which does evidently play in B-FAB and Lopez’s favor as things pick up. But Lopez finishes it quickly, planting her opponent with a powerbomb for three. Lopez and B-FAB can’t be faulted for inexperience; those who booked this one-on-one encounter instead of a mixed tag team match can be faulted.

InDex went to Florida, presumably, for their honeymoon — but not without Johnny Gargano and Candice LeRae spying on them. “They’re getting a little friendly out there,” says Gargano, who pretends to be a shark to scare InDex away. Ah, the wedding comedy was a tough act to follow.

The controversial Joe Gacy returns: “I have not been cancelled.” He speaks on a “triggered” NXT locker room, inclusivity, and other polarizing statements for the sake of being polarizing. Albeit, Gacy makes it work.

Commentary doesn’t mention Oney Lorcan’s long-time partnership with Danny Burch at all, which isn’t reassuring for “Throw It Up” fans. Quinn throws Lorcan around with impressive intensity and finishes it with a running forearm. Former NXT Tag Team Champion Oney Lorcan’s future has dreamt better days.

The NXT Tag Team Champions MSK are in-ring with Samantha Irvin, who asks Wes Lee and Nash Carter “what’s next.” But the Grizzled Young Veterans and Carmelo Hayes and Trick Williams interrupt, both of whom smoke the champions on the microphone. Josh Briggs and Brooks Jensen interrupt next, and a brawl commences with MSK coming out on top.

The champions get an enhancement entrance following commercial, which may or may not be telling. Similarly, they rarely get enough screen time to showcase their amazing athletic and technical abilities, which is on display here against Gigi Dolin and Jacy Jayne of Toxic Attraction. Shirai at some point cinches a double submission before Mandy Rose on the outside grabs a foot. But ultimately, Shirai connects with the top-rope moonsault to gain the victory and retain the championships.

Holler for this Bron Breakker promo package. “My goal is to become NXT Champion,” Breakker says, setting his sights on Tommaso Ciampa. Speaking of which, “live via Facetime,” is the champion to respond. This matchup is happening sooner rather than later!

Chase nonchalantly dismissing Ying is pretty funny, and so is his supposed ring attire — a Chase University sweater. He gains the upper hand as Ying menacingly stands ringside, impressively still at that. But Chase is blinded by Ying’s mist or vapor, which gives Boa the advantage and pinfall victory.

Back at the InDex honeymoon, Johnny Gargano hides inside their closet as they commence in a pillow fight. Yeah, that’s right.

Waller blindsides the champion, getting past the five Diamond Mine members ringside, and continues the momentum past commercial. Strong recuperates though and works Waller down until the latter makes the comeback — with a notably smooth elbow drop and outside dive. But after a close nearfall, Strong connects with a jumping knee for three to retain his championship.

Dante Chen represents “the spirit of Singapore and its people,” he says in a promo package. Afterwards, Trey Baxter and Cora Jade are backstage getting touchy while talking about her matchup next week.

It’s the debut of “Lashing Out” with Lash Legend, a studio talk show in the vein of Wendy Williams and such. Legend (yes, that’s her name) talks about the WWE Draft, her WNBA career, Baxter and Jade, Ikemen Jiro, and Andre Chase. And unlike Williams, Legend’s show was pretty enjoyable.

During Holland’s entrance, O’Reilly immediately initiates the attack resulting in a pull-apart brawl before commercial. The scheduled matchup begins anyhow, as Holland targets the injured ribs of O’Reilly, but the latter eventually makes the comeback. He continues fighting out of Holland’s power moves until Dunne causes a distraction. However, O’Reilly reverses the attack and rolls up Holland for the victory. Holland and Dunne attack the victor until the ultra-super-mega star main-eventer Von Wagner makes the triumphant save!

Monet has the illustrious Robert Stone and Jessi Kamea in her corner against the dominant champion, who overpowers the opposition early on. Monet eventually turns the tide ringside and keeps control over Gonzalez, who recuperates with closelines and a senton for two. She attempts the finishing bomb, but her back gives out. However, Gonzalez eventually connects with it and retains the gold. The match wasn’t bad. But let’s face it: the crowd was absolutely dead.