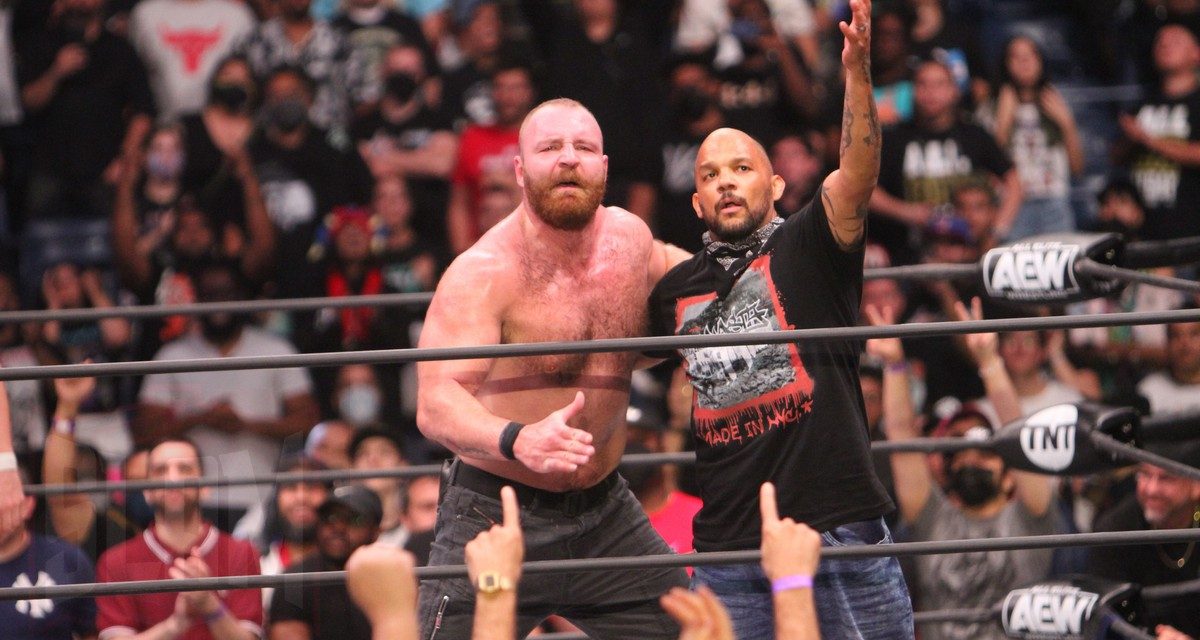 To butcher a quote from The Social Network, you know what’s cooler than one hour of AEW wresting on Friday night? Two hours of AEW wrestling. Rampage expands to two hours for the second half of the Grand Slam card from Arthur Ashe Stadium, though the show was actually taped Wednesday night after dynamite. Ignore spoilers, then, and let’s get on over to TNT to see how this all plays out.

OK, so this isn’t quite as mind-blowing as seeing Kenny Omega and Bryan Danielson on free TV last night, but it’s still very significant that Punk is wrestling for the first time on a non-paid card in seven years. I’m going to generously say Taz and Ricky Starks aren’t exactly neutral observers at the announce table. Also, did I mention Punk is wearing trunks? I feel like that’s the kind of detail a lot of people will want to know. There is a nasty looking spot when Punk reverses a top rope powerbomb into a hurricanrana and Hobbs lands hard on his head. Also, Punk is bleeding from the mouth, so these guys are taking some serious bumps. That applies to Hook too, as he jumps off the apron only to be knocked down by his teammates Hobbs, who in turn eats the Go to Sleep. Come on, you knew Punk was winning this.

Thunder Rosa says she isn’t afraid of Nyla Rose or Jade Cargill, which is brave. Jade and Nyla get a few seconds of promo time as well.

Superkliq already has shirts, which is savvy marketing, and Don Callis joins the announcers to form a tag team of sorts with Taz to run down Cage. It’s different with Jungle Boy, who elicits a bit of grudging respect from the heel commentators. This match probably won’t be a favorite of Luchasaurus’ critics — he just looks a step slow compared to the other five competitors. That expensive LED ramp gets quite the workout, and Cage gets thrown off of it to the floor, followed by Jungle Boy. That leaves Luchasaurus all alone, as he absorbs the Panama Sunrise, the BTE Trigger and the Last Shot before taking the pinfall. Geez.

Taz jokes that it sounds like a few people know the words to Jericho’s entrance theme. Yeah, just a few. Also, Rampage seems to be going to in-match commercials more often than Dynamite, but maybe it’s just me. Lambert feels like he is definitely going to get involved at some point, and possibly some of his American Top Team fighters as well. Sure enough, after the match lasts long enough to bridge into the second hour, Lambert grabs Hager’s leg at an opportune time to help Men of the Year steal a win.

Winners: Men of the Year by pinfall

An enraged Hager drags Lambert into the ring after the bell, but ATT fighters are approaching the ring from several sides and soon have Jericho and Hager surrounded. Andrei Arlovski and Junior dos Santos both climb into the ring and start throwing hands, and soon there are about 12 people in the ring. Jorge Masvidal delivers a pretty wicked flying knee to Jericho, which doesn’t get as big a crowd reaction as you might think. Maybe there isn’t a big AEW/UFC crossover audience? Who knew?

Backstage, Hardy rants to Tony Schiavone about Cassidy, challenging him to a Hair vs. Hair match … but against Evans, not him. Just like we’ve all experienced when our bosses were unhappy with us.

Sammy Guevara and Fuego Del Sol are out doing Sammy’s old cue card thing when Miro appears behind them. A fight ensues, but the Redeemer is too strong for his his foes and ends up hurling Fuego off the stage. Taz and Starks find the whole thing hilarious, including Guevara getting locked in the camel clutch.

Andrade El Idolo isn’t finished with Pac, promising to beat him next time and leave him no excuses.

Jay decides not to wait for Ford to even climb in the ring and starts the battle on the ramp. Yes, please use that ramp as often as possible. Get that money’s worth. The Bunny is out at ringside too, and what do you know, she slips the brass knuckles in to Ford. She’s not above using them while the ref is distracted, and that’s more than enough to get the ‘W.’

Ford and the Bunny put the boots to Jay after the bell, which brings Tay Conti sprinting to the rescue. Except maybe not, because the whole Hardy Family Office is out there making a human wall. Cassidy and Kris Statlander come out, but they’re outnumbered … until the Dark Order shows up en masse. Looks like the group has put aside its differences for Anna’s sake, at least for now. And by that I mean only now, because a group handshake is snubbed by Evil Uno, who leaves the ring with Stu Grayson following and trying to see what his deal is.

Mark Henry moderates a discussion between the two teams in tonight’s main event, but Eddie Kingston is in no mood to debate. Let’s just get after it.

Oh, I didn’t know this was an unsanctioned match, but it makes sense given who’s involved.

Archer brings a host of kendo sticks with him, and Suzuki launches into a running kick as his opponents approach the ring. He brings a pair of chairs up to the ramp and challenges Mox to a duel. Perfect. Suzuki and Kingston have a battle of chops, with Suzuki laughing after being hit several times. That’s really the type of thing you’d expect from this. It gets more vicious, as the heels tie Moxley’s hands behind his back, and Suzuki wears him out with a leather belt. You want Suzuki biting Mox in the head? Yep, we got that for you too. Kingston makes one heroic flurry but finds the odds too much, and is just about to be powerbombed onto two metal chairs when someone’s music hits … and that someone is Homicide. He’s not on the ramp, but he sneaks in from the back side of the ring, wielding a chair and freeing Moxley from his duct tape bonds. Mox hands out a pair of Paradigm Shifts before Kingston puts Archer in a trash can and just goes crazy with a kendo stick. Taz can only laugh as the Mad King covers Archer and gets the pinfall.

Well that was a satisfying way to end a long night of wrestling from Arthur Ashe Stadium. Rampage will be back to one hour next week and back indoors. See you in seven!

The Dynamite half of Grand Slam was a tough act to follow, and it’s possible the crowd was simply exhausted by the end of Rampage, having sat through five hours of pro wrestling, as awesome as it often was. This show did move along briskly though, with basically no filler, and still did some storyline advancement at the same time. Respect for that.