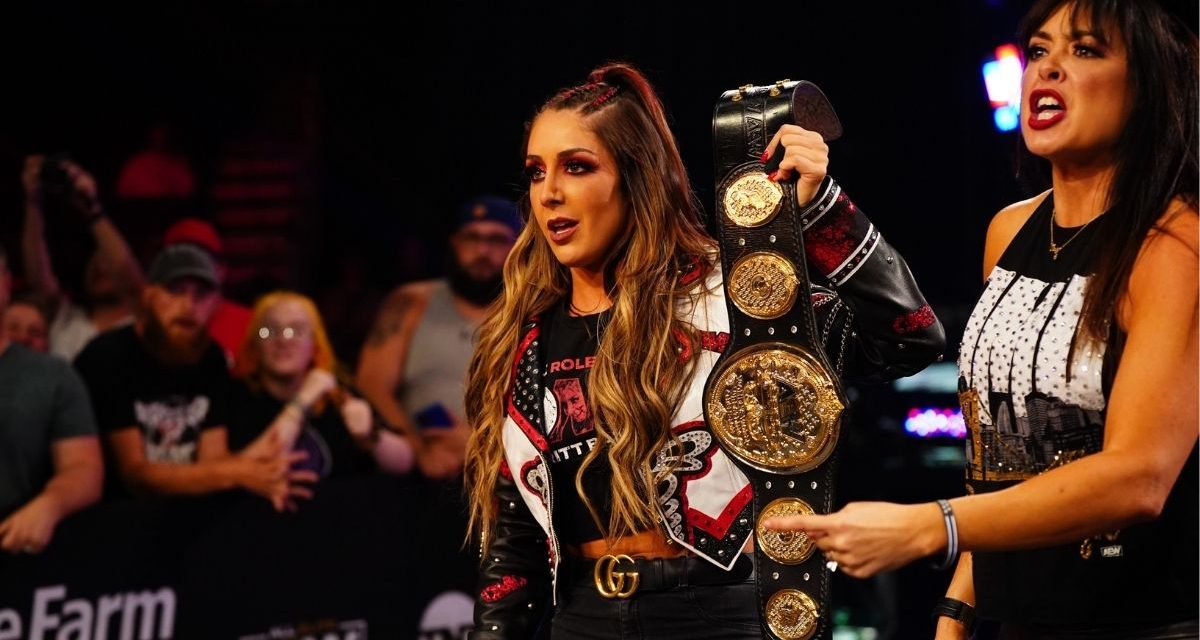 When Rampage debuted on the campus of the University of Pittsburgh a few weeks ago, hundreds of knock-off “Terrible Towels” were placed on the floor-level levels. The yellow towel, made famous by former Pittsburgh Steelers broadcaster Myron Cope, is routinely waved at Heinz Field on Pittsburgh North Shores on Sunday afternoons, or whenever the National Football League dictates the home team has a game. But here, fans were encouraged to waive the fabric for the “Hometown Girl” Britt Baker. They did just that in full force with the All-Elite Wrestling (AEW) Women’s Champion defended against Red Velvet.

It was a glorious welcome for Baker, a Punxsutawney, Pennsylvania, native who famously took classes across the street in the city’s Oakland neighborhood to become a real-life dentist. The transplant Pittsburgher trained and cut her teeth in the wrestling business an hour south of the city at one of Western Pennsylvania’s top independent promotions, IWC. Heck, she and boyfriend Adam Cole went to a restaurant with Anthony Bourdain when he visited Pittsburgh and pumped up the region a few years ago. By all accounts, Baker is a terrific young lady and a quality talent.

But she’s a heel, and for one-night-only she received a Kurt Angle “pop” as the region’s only champion, team or otherwise. Red Velvet — “Straight From Your Mama’s Kitchen” — is a babyface in every sense of the word, and she was fed to the wolves. The conclusion of the match saw Baker’s wing-girl Rebel get tossed by the referee to the back for choking Red Velvet with a crutch. The fans cheered with enthusiastic fervor as rules were broken. When Baker retained, she attacked Red Velvet and re-introduced new muscle Jamie Hayter to the crowd. She did her best to revert to rule-breaking villain after a week in which she was treated as the most popular personality next to Fred Rogers.

There within lies the rub. Baker is an awesome heel. When AEW debuted in Pittsburgh not long after its TNT launch, Baker was accompanied to the ring by the football team mascot Steely McBeam. She was a fan favorite then, and she labored far too much in her coming-out party then. Now she’s at the top of the mountain.

And there’s no one to challenge her. Ric Flair had his Dusty Rhodes. Hulk Hogan had an entire stable of Bobby Heenan goons. Wendi Richter had “Spider Lady” The Fabulous Moolah. Stone Cold Steve Austin had Vince McMahon and The Rock, and John Cena had Randy Orton. As the roster now stands, Britt Baker is more like The Fabulous Moolah before Richter than anything else. There will be a robust parade of challengers like Kris Statlander (a unique gimmick with superior athleticism who has a chance to be special), and the recently added Ruby Soho. The mix of charisma and in-ring talent needs to shine through.

Remember, the WWE puts their stars out to pasture for their corporate reasons. The former Ruby Riot was lost in a stampede of blonds and Sasha Banks/Bayley/Charlotte Flair rivalries. Right now as an AEW addition, Soho has zero business dethroning “The Face of the AEW’s Women’s Division” Baker.

Somewhere along the line, the breeze was clearly taken out of Thunder Rosa’s sails. The former NWA Women’s Champion held that belt high, but lost it to Serena Deeb, apparently never to catch wind of it again. Thunder Rosa and Baker had a high-profile, bloody main event match on TNT Dynamite—in which the Mexican-American won—only to see that bright spotlight immediately and swiftly shifted to her opponent. For no apparent reason, Thunder Rosa has been relegated to small-time feuds with Penelope Ford and getting a mud hole stomped in her by Nyla Rose and others before pay-per-views. Despite an impressive PPV showing, she isn’t in the title hunt any longer and that’s too bad. Ideally, a long-term plan may be to circle her back to Baker, so we will have to see. This entire argument goes away if they remember that Thunder Rosa is on the roster.

Right after Baker won the title, there was a brilliant opportunity to turn Nyla Rose babyface. Instead, she remained a disenfranchised heel, and forced Baker into a bad-girl vs. bad-girl romp right out of the shoot. That only gave Baker a bit of a hero sway she clearly didn’t want.

Deeb is always injured, which is unfortunate. She has the pedigree to challenge Baker, but that ship might have sailed. Hikaru Shida, who held the AEW Women’s title a record 372 days, has seemingly vanished. Riho, the federation’s first women’s champion, is now a non-entity in the women’s division. Both Shida and Riho are terrible on the microphone in English, so they could never compete there with the well-polished Baker. Conceivably, selling tickets is still a thing, and neither Shida nor Riho will do that.

Weakness on the stick is also problematic for the uber-popular Tay Conte. Prior to Rampage, AEW hosted about a dozen four- and five-minute contests for the Internet. When Conte hit the stage, she received one of the best responses of the evening. It wasn’t quite Jurassic Express-level excitement, but it was one of the hottest. She is good in the ring and has a very good shot at having a healthy program with Baker. As this is written, she is embroiled in a percolating and soon-to-be disappointing Dark Order program. There goes that potential push. (As with Thunder Rosa, if the AEW bookers remember that Tay Conti is on the roster, this argument is null-and-void.)

Jade Cargill, while the most impressive physical specimen anywhere in the sport, is years away from a prime position in AEW. Leyla Hirsch, who recently challenged the NWA Women’s Champion, should have a small run against Baker like Soho has now.

In golf, Arnold Palmer had Jack Nicklaus. Perhaps the greatest one-on-one rivalry in all of sports was tennis’s Chris Evert and Martina Navratilova. Britt Baker needs her Shooter McGavin to Happy Gilmore. She doesn’t have it, and none is on the horizon.

But then again, as Charlotte Flair is losing to Nia Jax and looking to take on a puppet, that light at the end of the tunnel might be closer than anyone thinks.