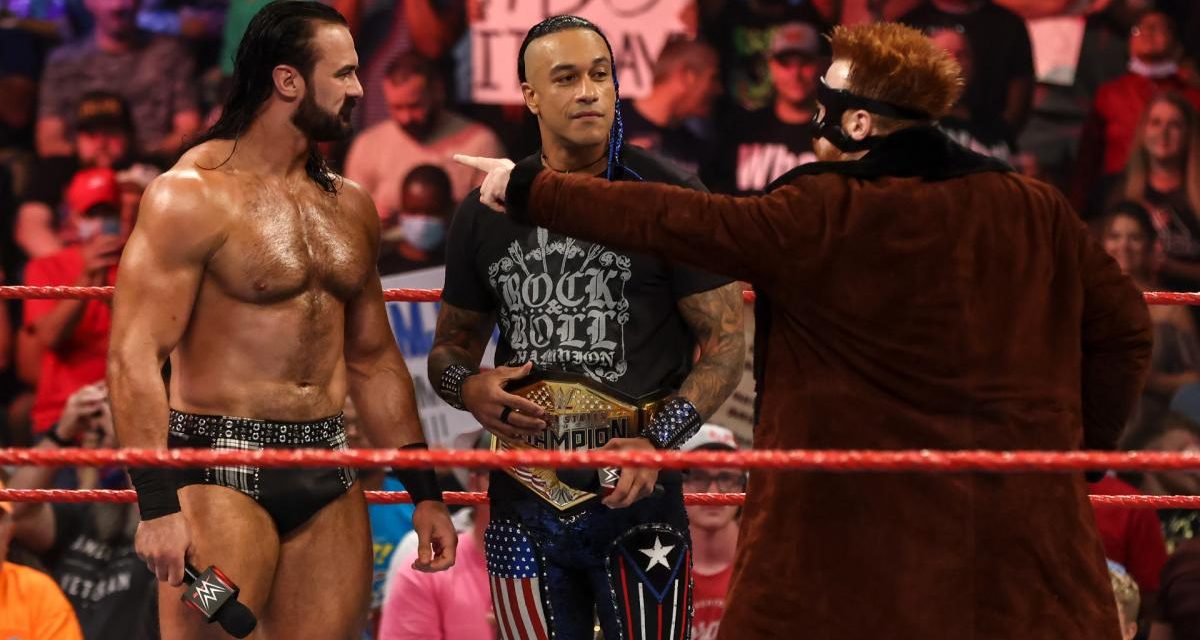 SummerSlam did seem uneventful for Monday Night RAW, but three titles did switch hands. Damien Priest captured the United States title and since he is a face; he will be hosting an open challenge for said title. Hey, we have four more shows to fill until Extreme Rules. WWE is still on the road, so let’s enjoy this while we can. Onto the show.

Priest doesn’t waste anytime, kicking the show off, something he has always wanted to do. He wants to show the title some respect and is willing to be a fighting champ. Priest officially announces the open challenge, while calling WWE Champion Bobby Lashley a coward.

Sheamus walks out and agrees with Priest about Lashley. He also wants to kick Priest’s head off and take his title.

Drew McIntyre heads out and wants to see something new. He has never won the United States Title. McIntyre wants a shot at that belt, tonight. Sheamus flips out, but then Lashley walks out on stage.

The RAW Tag Team Champions, RKBro, join the party. Orton and Riddle tell MVP that everything he said sucks and calls Lashley greedy. Lashley threatens to take the tag team titles instead. Riddle has an idea; he wants to issues an open challenge against Lashley and MVP. Orton tells him that isn’t how it works. MVP accepts the challenge. Drew and Damien agree to face each other.

Nia addresses Rhea before the match, but Shayna isn’t pleased that she is using her time. Shayna takes the fight to Ripley. She lands a kick to the chest, but has the second kicked blocked. Ripley with a short arm clothesline and follows with a head butt. Rhea with a low drop kick. She bridges into a pin off a German suplex, but Baszler kicks out. Shayna with a take down and tries to lock in an arm bar. Ripley gets a foot on the rope to break the hold. Nikki gives encouragement. Nia wipes out Nikki on the floor with a Samoan Drop. Rhea stares Jax down. Shayna with a rollup, but Ripley counters into a pin and gets the three count.

After the bell, Jax takes out Ripley with a Samoan drop. Baszler walks away from Jax heading up the ramp.

The Vikings Raiders vow to show some brutality toward their opponents.

The Viking Raiders vs. Jinder Mahal and Veer w/Shanky

Erik and Ivar take care of business. Ivar takes our all three men with a cannonball. Jinder rolls Ivar back into the ring, but doesn’t see the blind tag. Erik and Ivar hit Jinder with the Viking Experience and pick up the win.

Drew and Damien team up on Sheamus, who slips out of the ring. Priest takes him out on the floor by flying over the top rope. Sheamus responds with a head butt, but then takes a beating from McIntyre. Sheamus is knocked into the time keeper’s area and we go to commercial.

After the break, Sheamus connects with a flying clothesline to Priest. He follows with an Irish Curse back breaker. Sheamus beats on Priest on the apron, sending him to the floor. Sheamus poses, only to get hit by McIntyre. Drew with a neck breaker and kips up. Drew wants the Future Shock DDT, but Sheamus rolls him up. Drew kicks out, but then gets run into the ring post. Priest takes out Sheamus with a spin kick. He delivers shots to both men in opposing corners. Sheamus and Priest go to the floor and McIntyre follows, by flying over the top rope with a plancha. Drew hits Priest with a Michinoku driver in the ring, but a can’t get the pin.

McIntyre and Priest fight atop the turnbuckle, allowing Sheamus to attack from behind. Sheamus head butts Priest and goes up top. McIntyre suplexes both men to the mat as we go to commercial, again.

After the break, Sheamus and Drew are exchanging blows in the middle of the ring. Sheamus hits the Alabama Slam for a two count. Sheamus looks to lock in the cloverleaf on McIntyre, but Priest breaks the hold with a kick and then a sit out choke slam. Drew and Damien trade punches in the middle of the ring. Priest looks for the Reckoning, only to eat a Brogue kick. McIntyre rolls up Sheamus, who kicks out. McIntyre hits the Future Shock DDT and looks for the Claymore. Sheamus counters with a pump knee, but Drew kicks out. Sheamus argues with the ref over the count.

Sheamus picks up Drew on his shoulders and goes to the middle turnbuckle. He delivers White Noise, but Priest is able to break up the pin. Priest unloads a flurry of kicks. Sheamus blocks the Reckoning, only to eat a Claymore. Priest kicks McIntyre and hits the Reckoning. He covers McIntyre to get the win.

After the match, McIntyre and Priest shake hands.

Goldberg may have an injured knee, but he coming for Bobby Lashley’s soul to avenge his son.

Reggie is still out here repping the 24/7 title, all the while clowning R Truth and Akira Tozawa. PARKOUR!

Doudrop attacks Eva before the bell, slamming her to the mat. She follows with a senton and a cross body. She covers and makes her own count to three. The ref rules that Eva Marie is unable to compete. Doudrop announces herself as the winner.

I don’t want to see Humberto served up like this. Carrillo with a flying cross body and then flips out of a suplex. Kross with a clothesline to ground Humberto. Kross with a snap suplex into a pin, but Carrillo kicks out. Kross wants Humberto to chop him and then hits a Northern Lights suplex. Carrillo with a jawbreaker and a jumping round kicks. He follows with a drop kick in the corner. He goes up top, but Kross catches him with a forearm. Kross hits the Doomsday Saito suplex and locks in the Kross Jacket. Humberto taps out.

Nia Jax says she will crush anyone in her way, including Charlotte Flair.

Orton wants Riddle to be good at being his partner. Riddle won’t let him down.

Jax charges at the bell and Flair retreats to the floor. The two lock up in the middle of the ring. Jax backs Flair into the ropes. A shoulder block barely moves Jax. Flair looks for a suplex, but can’t get her up. Jax with a head butt, rocking Flair. Jax crushes Charlotte on the ropes. Flair dodges a hip attack and kicks Nia in the corner. Jax goes to the floor and Flair takes her out with a plancha over the top rope. We go to commercial.

After the break, the two are trading shots in the middle of the ring. Flair dodges a charge and Jax crashes into the ring post. Flair goes up top, but Nia gets her knees up on the moonsault. Jax with a Samoan Drop, but then misses on the leg drop. Jax catches Flair, but the Queen is able to hit a Russian leg sweep.

Flair with a chop block and then kicks the knee. Flair taunts Jax and looks for the figure four. Jax kicks her into the turnbuckle to block it. Nia picks up Charlotte and drops her with a choke slam.

John Morrison requested this match since the Miz is not here this week.

Morrison has his drop sticks, but we all know that won’t help against Omos. Morrison gets wiped and Omos picks up the pin after a vertical choke slam.

Styles catches Woods by the boot and hyper extends his knee. This sets up the calf crusher and AJ gets Woods to tap out.

AJ Styles and Omos stay for commentary, since they lost the belts to RKBro. Well, AJ is on commentary, while Omos towers behind him.

Riddle attacks Lashley at the bell, with no real effect. Lashley picks up Riddle for a delayed vertical suplex and drops him with one arm. MVP tags in and hits Riddle with a suplex. Riddle drives MVP into the corner and Orton makes the tag. The Viper stomps away at MVP. Riddle runs in to hit a moonsault and MVP rolls to the floor. Orton and Lashley stare each other down on the floor, allowing Riddle to take out Both Lashley and MVP with a moonsault. We go to commercial.

After the break, Lashley drops Riddle with a flatliner. MVP tags in but can’t get the pin. Orton gets the hot tag, pummeling MVP in the corner. Orton runs into a boot, but then MVP runs into a power slam. Orton stalks MVP and then kicks Lashley on the apron. He delivers the draping DDT to Lashley, but gets kicked in the jaw by MVP. Lashley tags in and beats on Orton. Bobby picks up Orton, who tries to counter the Hurt Lock with an RKP. Lashley shoves him into the corner, but this allows Riddle to tag in. Lashley fights Riddle off, but Riddle connects with a knee strike. He follows with the Floating Bro, but MVP breaks up the pin. MVP tags in, kicking Riddle in the face. Riddle with a big kick. Lashley picks up Orton on the floor, but Randy shoves him into the ring post. Omos grabs Orton, but Riddle makes the save. Styles goes after Orton, but gets slammed onto the announce table.

In the ring, Riddle connects with a jumping knee and goes up top. He hits the Floating Bro and covers MVP to get the win.

After the bell, Lashley spears Riddle, but Orton drops him with an RKO.

RAW is actually decent when it sticks to just wrestling. The United States Championship Triple threat is must watch. The tag team title match in the Main Event is also a don’t miss. There wasn’t much filler tonight, which is always a good thing.