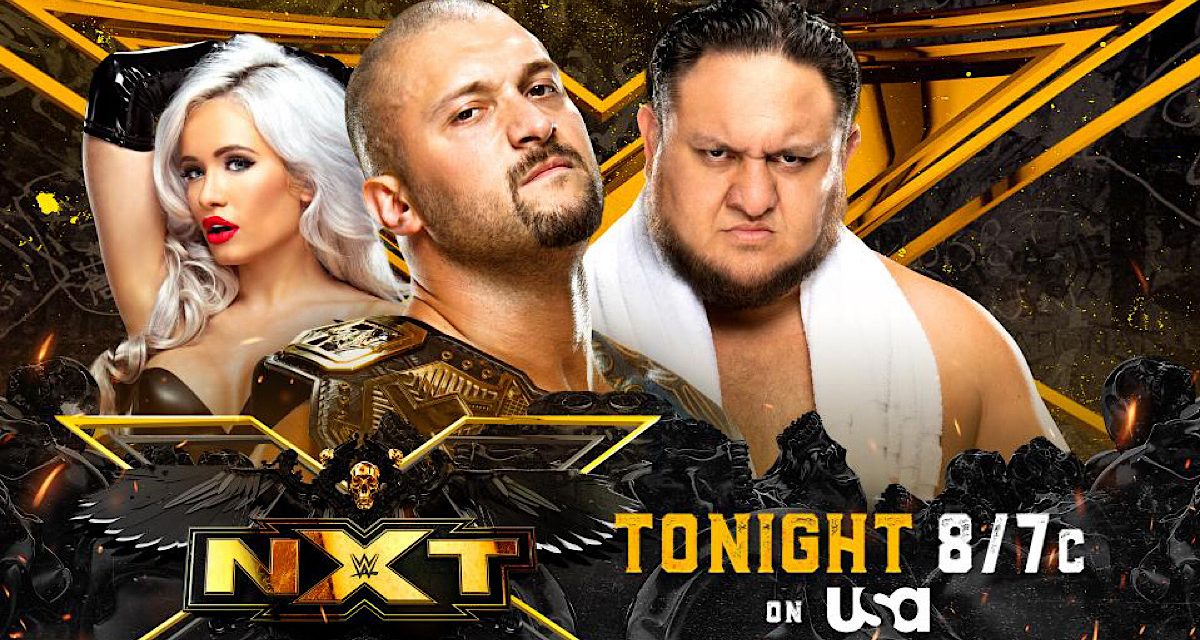 While SummerSlam on Saturday marks another return to normalcy, Sunday’s NXT TakeOver is quite the opposite. Not only is NXT TakeOver: 36 being held inside the Capitol Wrestling Center again, it could also signal the winds of change. But for tonight, NXT Champion Karrion Kross and challenger Samoa Joe headline tonight’s go-home show to TakeOver.

Malcolm Bivens takes the microphone to announce Strong’s open challenge, as NXT Cruiserweight Champion Kushida is not “medically cleared.” But making his entrance, a week removed from his main-event show stealer, is Dragunov. It’s a perfect matchup, and the competitors trade grapples and amazingly loud chops early on. Strong delivers an apron backbreaker before picture-in-picture and keeps the heat throughout. Dragunov gets badly busted open but continues his desperation comeback like no other. Ultimately, he connects with the Torpedo for three, pinning Strong clean… The victor calls for WALTER, but “The General” fails to answer back.

“The Undisputed Finale” might actually be aptly named, as Adam Cole’s future with WWE is uncertain. He’ll face archenemy Kyle O’Reilly in Three Stages of Hell (basically) at NXT TakeOver: 36, and a signature Prime Target video package hypes the matchup. The package’s motif of the Undisputed ERA’s rise and fall is parallel to NXT’s entire brand, no?

Hit Row enters the ring, responding to Legado del Fantasma’s attack last week. But Santos Escobar appears in the parking lot, with Isaiah “Swerve” Scott’s grillz in-hand. The latter storms outside before LDF blindsides him, and Hit Row joins the fray. In short, Scott got his grillz back!

“We are in this to protect and restore the honor of this great sport,” says the NXT UK Champion WALTER. He’s backed by Imperium, who face MSK tonight.

“The Million Dollar Man” Ted DiBiase is on commentary, perhaps five days before becoming LA Knight’s butler, who also joins ringside. Ignoring the bantering between them, Briggs displays great promise and notably delivers an insane-looking big boot. Grimes though, who’s still super over inside the Capitol Wrestling Center, counters with The Cave In for three. Before long, Knight socks DiBiase and plants Grimes ringside, sending a message preceding their Sunday bout.

The NXT Women’s Tag Team Champions Zoey Stark and Io Shirai are still active — and they’re interviewed backstage too. Stark is still concerned about becoming friends, but Shirai is focused on defending the straps.

Like a solar eclipse, Robert Stone is finally competing again. And friendly reminder, he’s ripped. He can’t match Dexter Lumis though, and Monet’s slight interference results in an ejection before commercial. Back from break, Lumis and Indi Hartwell dominate the opposition until Kamea reverses, and Stone… comically dives onto nobody. This allows Hartwell to capitalize with Lumis’ own finisher, giving InDex the victory. Admittedly, the Capitol Wrestling Center is wild for this and the proceeding moment: Hartwell puts a ring on Lumis, and the couple is engaged.

Malcolm Bivens claims that Ilja Dragunov is a heavyweight, meaning his win over Roderick Strong “never happened.” Diamond Mine’s sights are instead set on Kushida, says Bivens. Oh, and if anybody wondered, Wikipedia states that Strong is two pounds heavier than Dragunov.

Moderated by Beth Phoenix is a split-screen promo battle between NXT Women’s Champion Raquel Gonzalez and challenger Dakota Kai. The former friends face each other Sunday at NXT TakeOver: 36.

The 6’5” Hudson is favored here, but Hayes shows resiliency — that is, until being thrown down ringside before break. The size advantage is matched by Hayes’ quickness and nasty, ugly DDT onto the apron. He delivers a top-rope leg drop for a surprising three, sending him to the NXT Breakout Tournament finals against Odyssey Jones. After a nice post-match interview, Hayes comes face-to-face with Jones (who has an awesome theme song, by the way).

Last week it was Gigi Dolin. This week it’s Jacy Jayne with a promo vignette about “breaking free.” The rose petal motifs continue, hinting at a triple alliance with Mandy Rose.

Ted DiBiase meets with a defeated Cameron Grimes in the trainer’s room. DiBiase can’t help but smile at Grimes’ passionate promo as they head “to the moon” on Sunday.

MSK’s championship reign has been very forgettable, and it’s actually the storyline of this matchup, believe it or not. Challengers Marcel Barthel and Fabian Aichner control the opening half, and shoutout to them for looking extra chiseled. They keep pressure on Wes Lee throughout picture-in-picture, and the audience audibly appreciates the blunt aggression. Lee appears to be legitimately knocked silly but finally makes the tag. Nash Carter makes the comeback as WALTER appears ringside, but Ilja Dragunov evens the odds. MSK hits the assisted hangover finish for three, but WALTER isn’t finished. He chokes out Dragunov before their anticipated rematch this Sunday.

“You don’t step to geezers like us,” says Pete Dunne, referring to himself and Ridge Holland. Next week, Holland will face Timothy Thatcher.

Samoa Joe returns to in-ring competition this Sunday, but beforehand, he meets face-to-face with NXT Champion Karrion Kross. The latter’s microphone time is drowned out by “Hardy” and “Where is Scarlett?” chants, but Joe makes haste. He delivers and connects with a relieving suicide dive before brawling with Kross ringside. Both Joe and Kross are downed at show’s end, but Sunday, they battle for the NXT Championship.

It was a fine go-h0me show, nothing more and nothing less. The real story is NXT TakeOver, of course, and the episodes that follow. Could tonight’s go-home show be the go-home show for NXT as we know it?