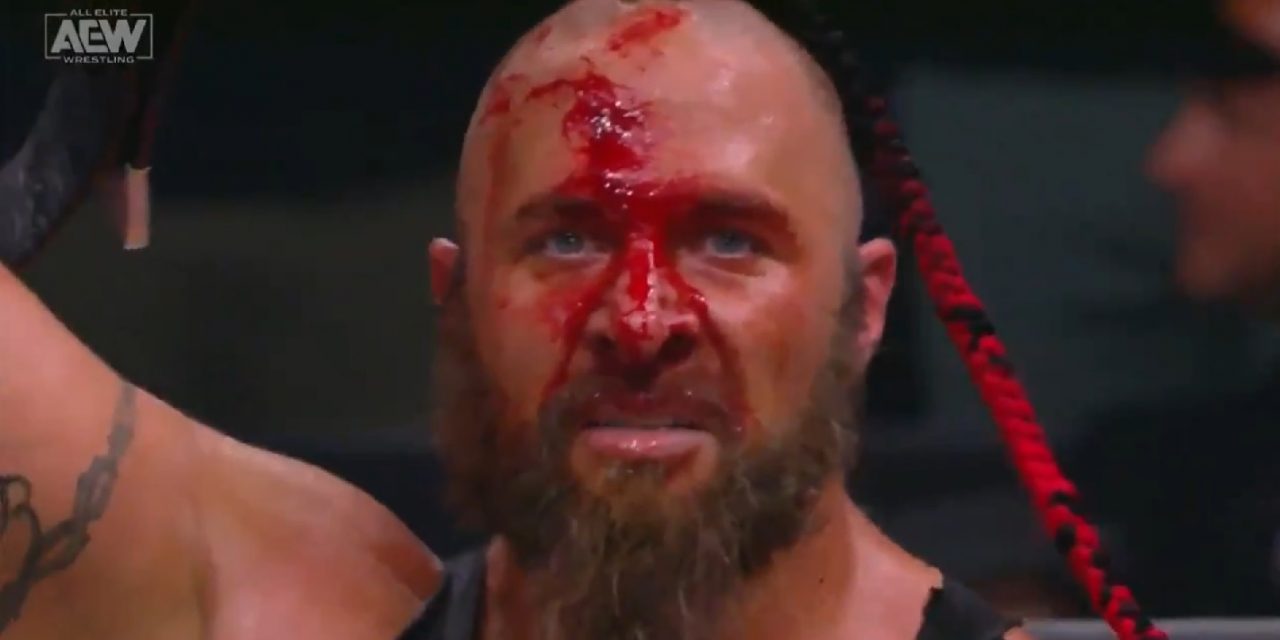 You may have heard some rumors about a certain disgruntled former indie darling turned WWE superstar who’s been out of the game for a while planning a return. But you know what? As awesome as that would be, AEW has a lot of great talent already on the roster, and they’re finally getting to perform in front of fans again as the cosmos intended. Tonight they’re in Garland, Texas, for the second night of Fyter Fest. Sounds misspelled. But it should be interesting, especially with a Texas Death Match to close the show. Let’s get to TNT and see.

As part of the ongoing Labors of Jericho, Le Champion has to face Spears with an interesting stipulation: Spears can use a chair as a weapon without being disqualified, but Jericho can’t. The fans let MJF know that he sucks as he joins the announcers to watch the action up close. He likes what he sees as Spears lays into Jericho’s already injured arm with a chair, and Excalibur sets up the theme we’re likely to hear a lot of over the coming weeks: Whether there will be anything left of the Demo God to even face MJF. Spears also has Blanchard to lend a hand, though he’s quickly neutralized by a very over Sammy Guevara. If you think the chair thing might come back to bite Spears in the butt, congrats, you’ve seen pro wrestling before. Jericho wins after running Spears into a chair set up in the corner and following up with the Judas Effect.

MJF, as he is wont to do, complains about Jericho “breaking the rules” to win, saying that if he gets any more assistance in any of his Labors, the deal for a match is off. For the second Labor, Jericho will have to take on someone who is certain to

Let’s hear from Miro, shall we? His promos are getting more and more pseudo-religious, as he has gone beyond calling himself God’s favorite champion and now also says he is “the Redeemer.” He’ll defend against someone when Dynamite returns to Jacksonville in a couple weeks.

So far, Kazarian’s Elite Hunter gimmick (which I love, by the way) has been mostly confined to beating up Elite members at ringside, so this is the first time he’s been able to get his hands on any of them in a match — on Dynamite, anyway. And it goes badly, with Frankie losing a pretty short encounter.

That’s just the start of Kazarian’s problems, though, as Kenny Omega and Don Callis join the Good Brothers in the ring. Could be a rough time coming up, but it isn’t long before Hangman Adam Page, drink in hand, makes his way down the ramp. Callis mocks the cowboy because the numbers are against him, which does indeed lead to a shorthanded beatdown … but only for a second, because Page is the rare face with a large group of friends. I’m talking about the Dark Order, who are numerous enough to help Page easily take some frustration out on Gallows.

Apparently Team Taz wants to hype up Ricky Starks winning a belt from one of his own now former teammates, as he announces an FTW Championship celebration next week. Brian Cage says that’s great because he loves celebrations.

Quite a few things going on here, as the announcers sell the damage to Allin’s ribs in his Coffin Match last week (taped up midsection always means hurt ribs, in the finest pro wrestling tradition) while NJPW’s Hikuleo watches from the crowd. The high point is undoubtedly Sting humoring Cassidy and trading low wattage shin kicks on the floor. Allin wins with a much higher energy Coffin Drop, and The Blade jumps Cassidy outside the ring in advance of their own match.

Jox Moxley and Lance Archer are getting ready to face off in a Texas Death Match, but they’ve done this dance before in Japan. Archer is a hometown guy, so … would he actually go over here? Surely not, right?

It’s amazing how much more over Baker is now than she originally was as a face, but that’s also not surprising considering how much more personality she’s been allowed to show. That fact keeps this from being a true heel vs. heel title match, which are always difficult to pull off in terms of crowd reactions. Indeed, there’s little doubt who the fans are backing here. One exchange sees Rebel distract the ref and both women act like the other either used or is threatening to use the title belt as a weapon, which is quite amusing. Not long after, Baker gets the Lockjaw fully locked in, and Rose can only fight it for a bit before she submits.

Tony Schiavone moderates a bit of a press conference with no press featuring Santana and Ortiz exchanging pleasantries with FTR. They’ll finally collide next week at Fight for the Fallen. Yes, there’s another themed edition in just seven days.

Doesn’t it feel like Andrade El Idolo has already had a special announcement or two since he arrived not long ago? Well, this time he has a surprise: Chavo Guerrero Jr., who seems to be on hand to talk about how great El Idolo is. Some people who may object come to the stage, namely, the now back at full strength Death Triangle. Wait, this is turning into a recruiting pitch, isn’t it? Will Rey Fenix and Penta turn their back on Pac and join Andrade? Also, it’s possible we might all be working for El Idolo and don’t even know it. Or something. This feels like a strange feud because the faces outnumber the heels. Andrade may need to reveal some more surprises.

Christian Cage and Jurassic Express are itching for another go-round with the Hardy Family Office. Elsewhere, QT Marshall says he thinks he will apologize to Schiavone for dumping a protein shake on him last week. We’ll see if he’s being sincere about that,

The Blade (w/ The Bunny) vs. Orange Cassidy

After his sneak attack earlier in the night, Blade thinks Cassidy is going to no show the match and asks the ref to raise his hand. Not so fast, my friend (respect to Lee Corso). This whole feud is some nice elevation for Blade, but despite getting his brass knuckles into the ring, he still falls to an Orange Punch.

As he explains to Alex Marvez, if he has to face Nick Gage, Jericho needs to do it as the most violent version of himself: The Painmaker. I approve.

There are super extenuating circumstances, of course, but it’s fun to note that Mox is the longest reigning holder of this NJPW belt by a wide margin (564 days coming into tonight) and one of only two men to hold it twice (Juice Robinson is the other). That and the fact that Archer is from Texas makes me feel like Moxley may drop the strap tonight, but since KO or submission are the only ways to win, I also wonder how they would do it while keeping Mox … well, Mox. In maybe the most fun crowd plant I’ve seen in recent memory, Archer picks up a man from his seat and throws him at Moxley. “Who was that guy?” Who was that guy, indeed, announcers. Things get bloody in a hurry as Moxley uses a fork on Archer’s face, but then we go to picture in picture. During the main event, really? Anyway, business picks up quite a bit when we are back at live action, with Mox pulling out a barbed wire-laced table that he ends up going through. He actually can’t get out of the barbs, and the ref counts to 10 to give us a new champ. Hikuleo comes out of the crowd to have a staredown with Archer, as he’ll get a shot at the belt next week.

And we’re out of time for this week. Next week is Fight for the Fallen, which has a great card in its own right. See you in seven!

In what is becoming a habit, this show got a late half-star bump for delivering a really fun main event. The rest of the show was good but not amazing, though there are some good things building, including the continuing Page-Omega storyline and whatever ends up happening between Death Triangle and Andrade. The “special” themed episodes of Dynamite will eventually wear out their welcome, but that hasn’t happened just yet.