Mat Matters: How Andrade’s WWE career could have been saved 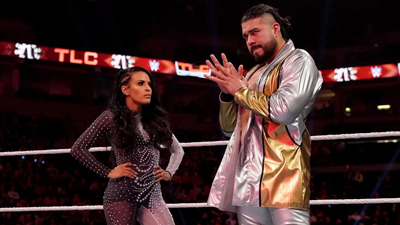 Andrade is one of the most skillful and talented professional wrestlers on the planet. Due to the language barrier, Andrade may lack the promo skills but his charisma and wrestling ability speaks volumes.

Unfortunately, Andrade’s time in the WWE came to an abrupt end when he requested a release and his wishes were granted on March 21st. On June 4th, the former Andrade became Andrade El Idolo, making his first AEW on-screen appearance alongside Vickie Guerrero. Although Andrade is a great addition to the AEW roster, I feel his time in WWE could’ve been salvaged and revived with a faction idea taking inspiration from WCW’s LWO (Latino World Order).

The year 2020 was a tumultuous one for Andrade, to say the least. He was an important part of Raw to begin the year and even held the United States championship. He had a budding partnership with fellow Mexican superstar Angel Garza and a previous rivalry with another fellow Mexican in Humberto Carrillo. Andrade’s valet and business associate Zelina Vega, has always played a pivotal role as the superstar’s mouthpiece and manager. These are the core members to revive a faction very similar to Latino World Order but to give the group a new look and feel, I propose their name be Latino Revolution.

I still have Andrade and Angel Garza beating up Austin Theory and kicking him out of the group in May (as he’s not a Latino superstar) — sending Theory back to NXT. Humberto Carrillo spends most of his TV time losing in quick fashion and barely putting up a fight. From being in the U.S. title picture not too long ago Carrillo becomes reduced to enhancement talent. This is where Andrade, Garza and Vega begin to lure Carrillo into joining their new faction. Of course, the babyface Carrillo initially declines and fights the group off. On a episode of Raw, Lucha House Party are celebrating a victory when they are suddenly attacked by Andrade and Garza. The two men stand over LHP in a brash, cocky fashion when Zelina Vega takes the mic and says: “These fools are a joke to the heritage and illustrious history of lucha libre. The two men standing before you, Andrade and Angel Garza, are wrestling royalty and the next generation of Latino superstars! Ladies and gentlemen, you have been warned. This is the Latino Revolution!” 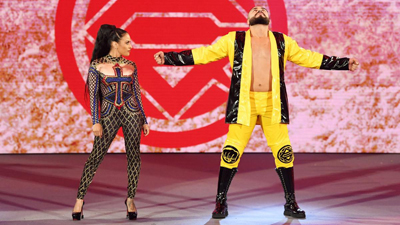 A couple weeks later on Raw, Andrade/Garza have a tag title match with The Street Profits, when Lucha House Party returns for revenge as they attack the two and end the match in disqualification. Just when it looks like LHP are going to one-up Andrade/Garza, Carrillo sneak attacks LHP with a steel chair — officially joining Latino Revolution. At SummerSlam, Latino Revolution convincingly defeats Lucha House Party and puts an end to their first feud as a faction.

Latino Revolution’s next feud is with Rey and Dominic Mysterio. In this new scenario, Rey and Dominic put an end to their rivalry with Seth Rollins a lot earlier than it actually did. They stay on Raw and Rollins moves to Smackdown. Impressed with Dominic’s performance at SummerSlam, Latino Revolution takes interest in recruiting Dominic to their faction. However, Rey rejects this offer as he sees the group as bad influences and he’d rather be the mentor to his son. As a result, Latino Takeover attacks both Rey and Dominic and have a 2-on-2 match pitting Andrade/Garza against the Mysterios at Hell in a Cell. The Mysterios surprisingly defeat Latino Revolution but the faction does not take this loss lightly.

At Survivor Series, Andrade and Rey Mysterio are both members of Team Raw, where their constant butting heads ultimately cost Raw the victory. On the Raw after Survivor Series, Rey Mysterio has had enough of Andrade and Latino Revolution. He challenges Andrade to a chairs match at TLC. Dominic thinks Rey is being too focused on beating Latino Revolution by himself when its supposed to be a family matter. Rey tells Dominic to stay out of it and this fight is for him to take care of. Dominic feels left out, especially after his in-ring performances at SummerSlam and HIAC. 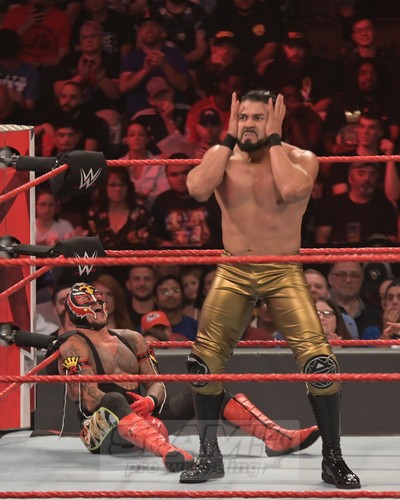 Andrade versus Rey Mysterio at SummerSlam 2019. Photo by Joe Hrycych

At TLC, Rey and Andrade have their chairs match. In the match, Rey takes a very unusual turn where he is increasingly violent and acting out. He attacks the rest of Latino Revolution with the chairs and even tries to attack Zelina Vega out of frustration. Suddenly, Dominic runs out trying to stop his father from going crazy, when Rey pushes Dominic out of the way to get back at Andrade. Just when Rey has the match won, his own son Dominic attacks him with a chair and stares down his father’s lifeless body as Andrade pins Rey to win the match. Dominic Mysterio joins Latino Revolution.

Explaining his actions, Dominic felt like his father was holding him back from making his own decisions. Dominic did not want to live in Rey’s shadow his entire career so he made the choice to join Latino Revolution to make his own history. 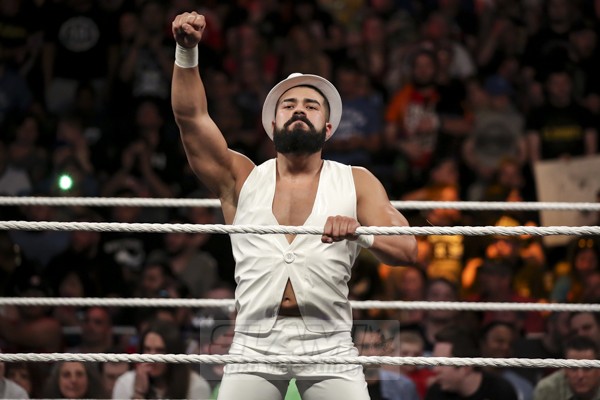 At the Royal Rumble 2021, Andrade shockingly defeats McIntyre (much like his NXT title victory) and captures his first WWE Championship with the help of Latino Revolution. On the Raw after Royal Rumble, Andrade and Latino Revolution are having an extravagant Mexican fiesta to celebrate his title win, when a visibly damaged Drew McIntyre interrupts to request an immediate title rematch. Andrade laughs him off but given McIntyre’s injured state, he grants McIntyre his rematch clause as he can take advantage of the situation. In the main event, Andrade easily defeats McIntyre without any outside interference, and McIntyre now has to fight to gain another title opportunity.

In the weeks leading to WrestleMania, McIntyre evens the playing field by beating every member of Latino Takeover to ensure they will not interfere at the show of shows. At WrestleMania 37, Drew McIntyre regains the WWE Championship with a crowd in attendance, giving WWE higher-ups and the WWE Universe what they wanted.

Although Andrade’s title reign is short and he serves as a transitional champion, this storyline basically saves Andrade’s WWE career and the careers of his fellow faction members. After Mania, there are a lot of directions Andrade and Latino Revolution can go. He can continue his rivalry with McIntyre, he can move brands, the group can begin to feud amongst each other, so on and so forth.

The sky’s the limit in this reimagined scenario. This push would have kept Andrade in WWE and created some interesting and must-watch television storylines. What a shame that the WWE lost Andrade to the competition.

Now, let’s see what AEW does with him.