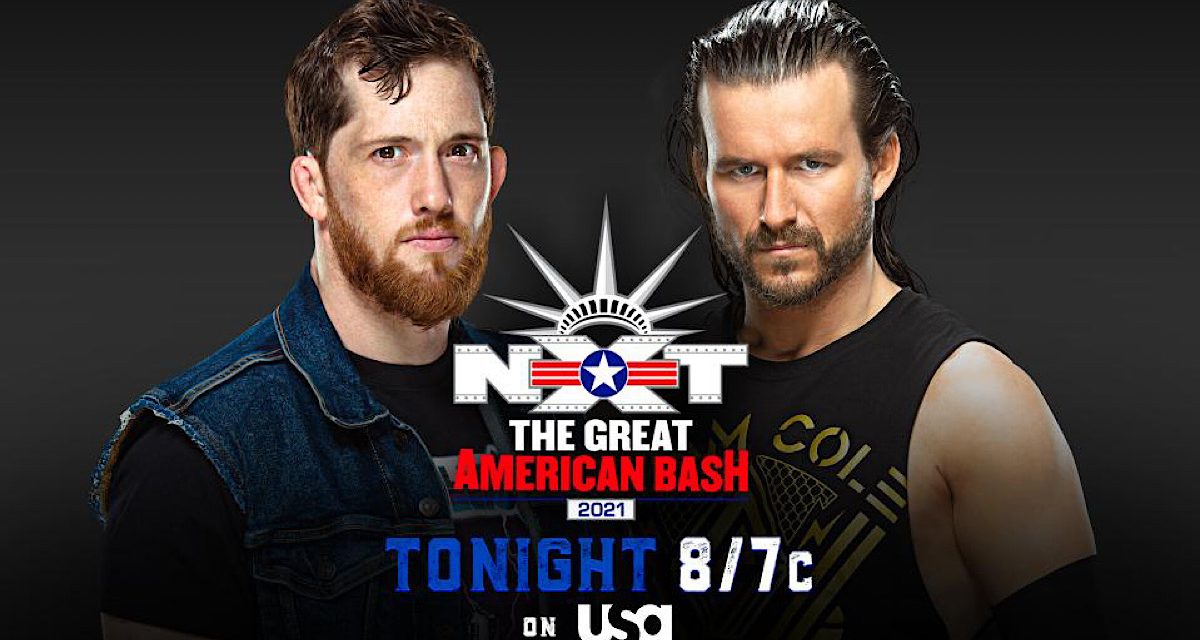 The long weekend of barbecues and incessant fireworks was apparently not enough to celebrate this year’s Independence Day. The United States is certainly… a country, and tonight was its annual Bash, which mostly happened to be Great. Along with some exciting championship bouts, the clear headline matchup was Kyle O’Reilly versus Adam Cole, who seemingly gave it their everything. But, this feud is presumably far from over.

“Ciampa’s gonna kill you” chants and vocal boos hint that MSK is wanted marinated and skewered by tonight’s packed audience — which, mind you, isn’t a favorable reception for the underdog face champions. In fact, they pop pretty loudly when Wes Lee and Nash Carter are beaten around by the grizzled challengers before and after break. Despite MSK’s high-flying offense, the challengers’ stiff and calculated game is far more impressive and exciting; and really, the champions look totally outclassed. Their sparse comebacks are stuffed and capitalized on before Thatcher and Ciampa attempt simultaneous finishers. But, Lee cinches the sneaky rollup on Thatcher for the abrupt three count. There isn’t a post-match angle, leaving that finish milder than Frank’s RedHot sauce.

Looking fresh and classy, General Manager William Regal and his enforcer Samoa Joe are in-ring with security encompassing the ringside area. Without wasting any time, Johnny Gargano and the NXT Champion Karrion Kross arrive to meet face-to-face as Regal officially announces next week’s title match. They exchange quips and burns, and notably, Kross openly declares his WWE Championship goals. Ultimately though, Samoa Joe is named the special guest referee and is forced to separate them.

The Cruiserweight Champion Kushida has a vignette promo for Diamond Mine after their attack two weeks ago. Kushida versus Roderick Strong? Yes please!

The stipulation is this: if Grimes loses, he is forced to become Knight’s butler. Does Grimes fancy “soulful” Italian cuisine, perhaps? Well, the competitors jockey for the upper hand preceding picture-in-picture, and Grimes is the obvious fan favorite. After being worked down throughout the break, he finally catches the standing Spanish Fly before engaging in a classic “yay-boo” exchange; fans are back — remember that spot? Knight himself shows off the athletics with a box-jump Superplex but retreats ringside to grab the championship belt. Rollups are escaped from, and finishers are avoided before Knight DDTs his opponent ringside. The determined challenger beats the count but succumbs to Knight’s facebuster for three. Congratulations to Grimes for finding a new job amidst current climates!

Dakota Kai and Raquel Gonzalez — who happens to be the NXT Women’s Champion — are interviewed backstage about the upcoming championship match. Having a separate set of women’s tag team championships apart from the main roster is still head scratching.

Shirai seemingly takes full control against Indi Hartwell, but the latter recuperates against Stark before break. Stark is finally able to reach her corner, and former rivals Shirai and Candice LeRae do battle in-ring. The Way catches simultaneous submissions and ultimately regains control, but as LeRae attempts the Wicked Step-Sister finisher, the lights go out. The recurring battery charge appears on-screen and reaches 100%, revealing atop the stage a returning Tegan Nox. Get it, because she’s at 100% after injury? Well, Hartwell’s springboard is foiled as Stark delivers the finisher for three, and Nox chases LeRae away from ringside.

Toni Storm is interviewed backstage and responds to Sarray’s polite challenge last week. Putting it short, “the answer is no.”

InDex is reunited, guys. Dexter Lumis carried off Indi Hartwell during the break while commentator Beth Phoenix geeked out like she was watching a Hallmark movie.

“Welcome to the Hit Row NXT North American Championship Cypher Celebration!” declares DJ Ashonte “Thee” Adonis. For the uncultured ones out there, a cypher is a freestyle — or rap — performed in a group, and Hit Row is using it to celebrate Isaiah “Swerve” Scott’s title win. B-FAB uneventfully goes first, but Top Dolla picks things up. (Football, wrestling, memorabilia collecting, and rapping; what can “Top Dolla” AJ Francis not do?) The champion Scott goes last, but great Scott, it’s rough. Hit Row collectively performs their entrance theme afterwards, which frankly sounded a lot better than the cypher.

The years-long saga continues, but in NXT lore, it’s match number two. After a quick cut to commercial, O’Reilly is in control using his signature limb targeting and striking, but Cole turns the tide with an outside neckbreaker. The audience is split — not “50/50” as commentary says, but rather favoring Cole. The matchup is hot nevertheless as both competitors trade offensive strings, and Cole talks some trash before focusing on the left knee into picture-in-picture. The rivals exchange desperation blows, and in the latter half, O’Reilly intercepts a superkick and delivers a nasty suplex. Cole recuperates into a Figure Four, and O’Reilly reverses into a heel hook. In the final minutes, Cole connects with an outside Panama Sunrise to a rope break, connects with The Last Shot, but O’Reilly kicks out. Ultimately, it’s O’Reilly’s injured left knee that allows Cole to deliver Panama Sunrise and the actual Last Shot for three.

During Adam Cole’s run as NXT Champion a couple years back, he’d habitually have super long nail-biters with numerous finishers and kick outs. Well, there was a glimpse of that tonight against O’Reilly which brings back the argument: is it too much? They evidently did go seven minutes over NXT’s two-hour mark, but disregarding time, they threw a lot into that bout. Nevertheless, it was an outstanding main event that deservedly got a standing O from the audience.