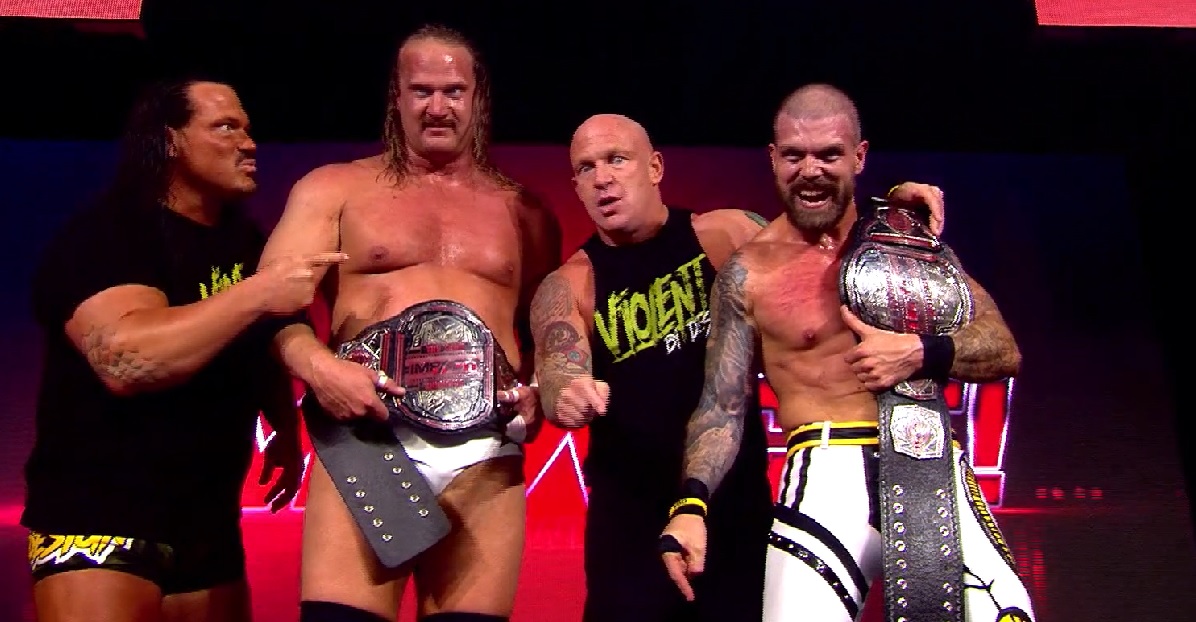 Welcome to a streamlined Impact report. Unfortunately, a sprained wrist makes typing about as agonizing as listening to a Kenny Omega promo without Don Callis. So this week, we’ll be doing a more “bare bones” report than normal, focusing on the key moments and storyline developments, but holding back a little more than usual on the match recaps. But that also gives you a reason to seek out the main event match – a Tag Team Championship match pitting challengers Eddie Edwards and Satoshi Kojima against champions Violent By Design – which you definitely should, because it was simply fantastic.

On the Before the Impact pre-show, TJP and Fallah Bahh beat Decay (Crazzy Steve and Black Taurus).

Impact started with Don Callis and Kenny Omega being stopped at the Executive entrance by the doughy building security guard. He told them that since Callis was fired from his EVP position last week, they could only use the Talent entrance. Callis blew up at the guard, cutting a great promo, and the guard backed down and let them in.

Hogan tried to avoid mixing it up with Rosemary, but eventually got caught, including being locked in the Upside Down. Tasha’s interference allowed Kiera to take over. Havok then came to the ring to even up the odds on the outside. Hogan was still dominating, but soon Rosemary recovered, and hit a series of big moves, eventually ending things with As Above So Below.

This was a good match, and continues the setup for Rosemary and Havok to get a shot at Fire N Flava’s Tag Team Championship.

Gia Miller interviewed Chris Bey, asking why he didn’t get involved in the skirmish between the various X-Division contenders last week. Trey Miguel and Petey Williams tried to recruit him to join them in their feud against the Ace Austin / Rohit Raju alliance.

Gia interviewed Tommy Dreamer, who said that he went to the Board of Directors to complain about Don Callis, which ultimately got Callis fired, because it needed to be done. Scott D’Amore came up to him and admitted that he wasn’t necessarily addressing the issues with Callis sufficiently because of their friendship, so thanked Tommy for thinking of the company first. Dreamer said that he would always be there “to oversee things,” which puzzled D’Amore. Dreamer revealed that the Board asked him to stay on as their special advising consultant, which didn’t sit too well with D’Amore.

This wasn’t a complete squash by Purrazzo, but it was pretty close. Basically, she picked apart Susan, working over her arm and shoulder very clinically for several minutes, and then just toying with her. Susan fired back briefly, even hitting a Superplex, but after landing, Purrazzo held on, floated over, and locked on an Armbar for the submission win. After the match, Purrazzo locked on Venus De Milo for good measure, and then told off both Susan and Lee.

This was effective, though it’s hard to know who is supposed to be the sympathetic party in this situation, since none of them are really suited for a babyface role at this point. Perhaps Susan and Lee could recruit someone to take out Purrazzo. But then what do you do with them?

TJP and Fallah Bahh were at Swinger’s Palace, where TJP’s perennial losing ways continued. Willie Mack and Rich Swann came in, and there was a debate as to who had the best shoes. John E. Bravo won with his leopard-skin wingtips. The two teams started debating as to who of them were next in line for a Tag Team Championship match, and a match between them was made for next week.

Backstage, Don Callis approached Tommy Dreamer, and told him that he had no hard feelings about Dreamer getting him fired. Callis paid him some very backhanded compliments, and then suggested the Dreamer find a couple of partners to team up against his team of Kenny Omega and the Good Brothers. Dreamer agreed, despite Callis making it clear that his goal was to end Dreamer’s career and get vengeance for getting him fired.

This was a pretty standard match. Miguel and Petey fared well when they had Raju isolated, but struggled against Shera’s power. After some back-and-forth action, Miguel and Petey looked to be in control. Ace Austin and Mad Man Fulton came down to the ring, and their presence distracted Petey and Trey. Turning to address them, Petey fell prey to a big running knee and a Drive-By by Raju that put him down. After the match, they attacked Petey and Trey 4-on-2, until Josh Alexander ran in to help take down the fearsome foursome. He got blindsided by Fulton and the beatings resumed. Chris Bey walked out, but instead of joining the fray, he simply took a selfie video of the beatdown from the entrance ramp.

Backstage, Gia walked up to Tommy Dreamer who was trying to recruit Sami Callihan to join him in the match against Team Callis next week. Sami said that he would do it, in order to get a chance to beat up Kenny Omega. Moose walked up to them and said “I’m in.” Oddly, the commentators said that Dreamer would still need to find a third person for his team, despite it being said earlier that it would be Dreamer and two partners. Continuity issue? Botched promo? This was a bit confusing.

Rachael Ellering was in the ring, and invited Jordan Grace to join her so they could clear the air.

When Grace entered, Rachel told her that winning the Knockouts Tag Team Titles with her was one of the best moments of her life. She got emotional talking about how her life had been low for the past year, how she had been suffering from depression and was feeling pressure from everyone to be positive. She realized that she was pushing Grace in a similar way, and apologized for that. When she mentioned that Tenille Dashwood was getting into Jordynne’s head, Grace got angry. Grace said that she had a great career in Impact even before she teamed with Ellering, and things got heated.

In the back, Sam Beale was taking notes during another lesson from Brian Myers.

Match 4: Sam Beale vs. Jake Something

Something pretty much overpowered Beale, despite Beale taking some shortcuts. Myers tried to help Beale by sliding a chair into the ring, but it was intercepted by Something. After that, Something hit a Black Hole Slam to end things quickly and convincingly. After the match, Myers told Beale not to blame himself for the loss. But rather blame Jake Something, who Myers said was not a professional. Myers told Beale to do the opposite of anything Something does. This was what it was.

In the back, Eddie Edwards and Kojima were readying themselves up for their Tag Team Championship match later tonight. Rich Swann and Willie Mack came up to them, and wished them luck. Edwards said that when they win, they’d offer Swann and Mack the first title shot.

This was a heck of good match. Edwards and Kojima did well against Deaner, but when the giant Doering was in there, he dominated with his powerful hard-hitting offense. VBD isolated Kojima for some time, before he was finally able to make the tag to Edwards, who nearly got the win after a Blue Thunder Bomb on Deaner. Later, Edwards and Kojima turned things up a notch, hitting their opponents with simultaneous dives to the floor, heading into the commercial break.

After the break, Kojima and Edwards were firmly in control over Deaner, prompting Doering to run in repeatedly, each time hitting a big impact move despite not being legal.

At one point, Edwards and Kojima hit both opponents with Machine Gun Chops in the corner, and then hit Running Corner Splashes. Later, they hit a Hurancarana-Flying Elbow combination for a very close call.

Another great sequence saw Deaner push Edwards off to get out of a Backpack Stunner, sending Edwards directly into the line of fire of a Cross Body by Doering, and a Deaner Flying Headbutt for 2-and-7/8ths. Later, Doering was the one who nearly got pinned after a Discus Clothesline by Kojima and a rollup by Edwards.

In the end, Doering ran straight through a Double Clothesline attempt, but then got hit with a Cozy Cutter. Edwards looked to finish him off with a Boston Knee Party, but Doering caught him, and hit a Revolution Bomb to put Eddie down for good.

This was really good and got really exciting in the closing minutes. This may have been VBD’s best match to date. Doering’s positioning as an unstoppable monster is one of the best things going in Impact right now. They really should be considering him as a possible contender for Omega’s title – that’s a money match right there.

Highlighted by the strong Ellering-Grace segment and the great main event match, this episode was really strong overall. With a few more weeks to go to fill out the card for Slammiversary, this one did a good job of moving storylines along. And it also sets up an intriguing main event for next week, with the return of Impact World Champion Kenny Omega.