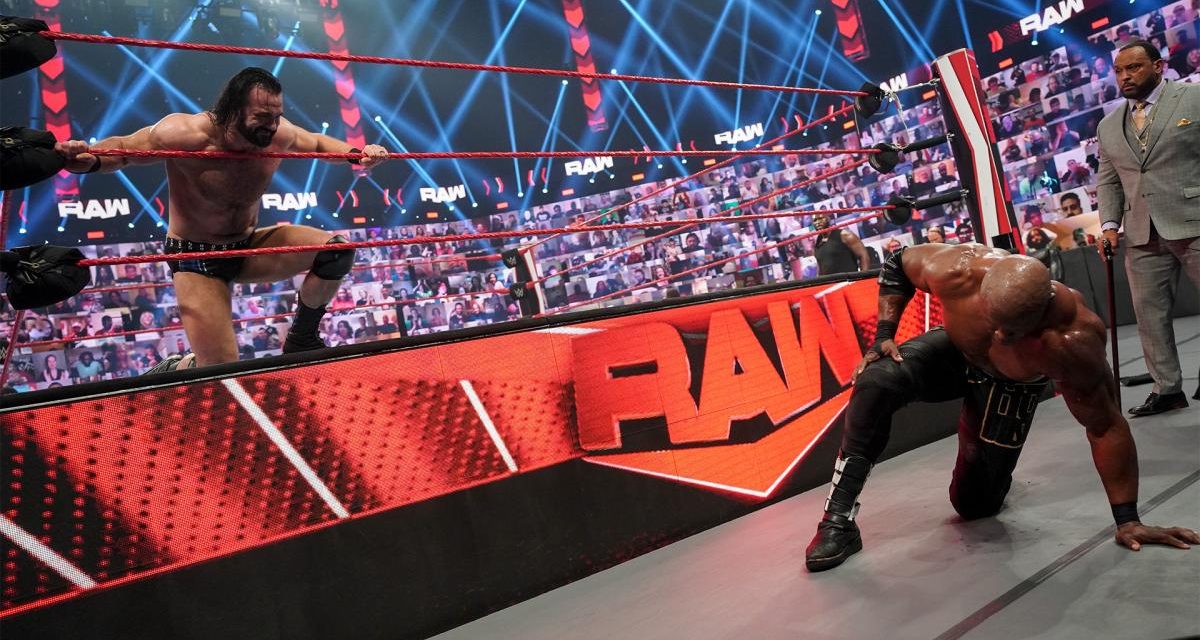 With Slam Wrestling’s regular Raw reviewer Dale Plummer unavailable, he demands that nothing interesting happens tonight. It’s a low bar … can the WWE clear it?

Alexa’s Playground opens up the show, as she kinda, sorta apologizes for Lilly’s actions last week, which amounted to tormenting Shayna Baszler. Bliss says she’s put Lilly in a time-out before Nia Jax arrives, asking Bliss to leave her tag partner alone. Jax reminds Bliss of when they used to be friends, but Bliss contests her version of history (me too, I remember a rather lengthy bullying storyline between the two) and it all ends up with scheduling a match between them for later tonight.

After a look back at Cross’ run of good fortune against both Raw Women’s champ Rhea Ripley and Flair, her challenger this Sunday at Hell in a Cell, it’s not much of a surprise to see Ripley make an entrance immediately after the bell rings. Cross tries to take advantage of the distracted Flair with a roll-up, but can’t quite get the three-count.

Coming back from commercial, Flair has Cross on the mat as Ripley enjoys the view from a seat by the announcer’s table. Cross shows some life again, but a clothesline and a choke across the middle rope takes the starch out of the Scot again. A few chops later and Cross is flat on her back, but Flair’s set-up for what looks to be a superplex backfires as Cross brings her down with a tornado DDT.

After Flair rolls to the floor, Cross tries to follow with a cross body off the apron, but she’s caught and sent crashing to the mat right in front of Ripley. While Flair and Ripley jaw at each other, Cross slips into the ring and the ref reaches a count of ten.

Flair is upset, naturally, and attacks Cross on the outside, bringing her back into the ring. As she continues her assault, Ripley slips in and plants Flair with a Riptide. 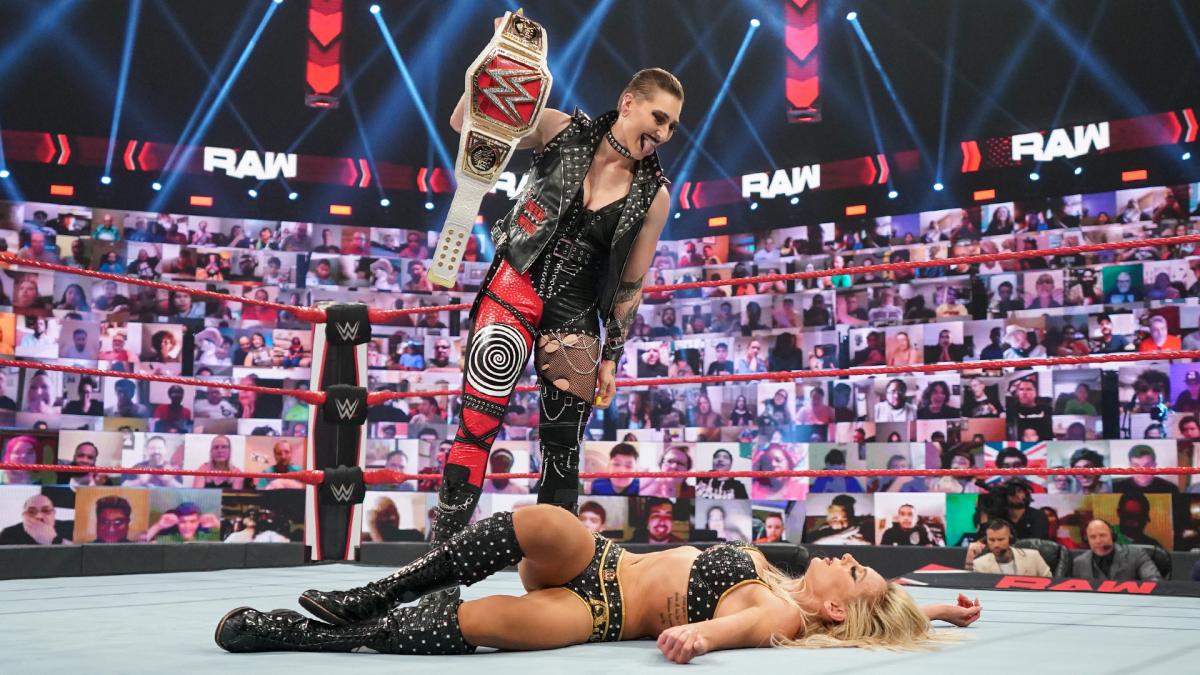 Ripley makes a statement before her match with Flair this Sunday. Photo: WWE

Backstage, Matt Riddle is chillin’ on his scooter, talking to Jeff Hardy about how bad he feels after letting his partner Randy Orton down in a loss to Kofi Kingston last week. It’s really hard to tell if Hardy is paying attention, what with his painted eyelids, but he does give Riddle the advice that successful tag teams are made of teamwork, continuity, and trust. In the end, Riddle is simply blown away when Hardy opens his eyes.

The announcers play up the history between The Miz & Morrison and Hardy and … well, they stumble along talking about tag team matches without mentioning the name “Matt”. After some awkward blabber, they just move on.

Hardy suffers a drip-stick attack before the bell, but it doesn’t seem to faze him much, as Hardy clobbers Morrison into the corner. As Morrison blocks Hardy’s swinging corner kick and follows with a parkour clothesline, Cedric Alexander arrives for a look at the contest as Hardy chucks his pants-towel at The Miz and lands a Whisper in the Wind for a two-count.

Morrison executes a rope-hung stunner from the apron, sending Hardy to the mat and all cued up for Starship Pain.

Morrison gets only a moment to celebrate before Alexander grabs a mic and tears down Hardy for how he acted after their match last week. Alexander says he should have beaten Hardy into retirement, so, naturally,  Hardy replies by saying he’ll retire if Alexander can beat him right now.

Hardy gets in the first few shots, but Alexander begins working the left knee and leg, though Hardy soon has Alexander down in the corner and swinging his double dropkick into his chest. Alexander plants Hardy with a Michinoku driver for a two-count, then climbs the ropes missing with a Swanton. Instead, a Twist of Fate by Hardy sets up his own Swanton for the win.

That was a ten-minute rollercoaster of emotions as Hardy was nearly forced into retirement.

Poor Naomi. That’s all I’m thinking before this match even starts. Except, things suddenly take a turn, as Eva Marie does not get in the ring, but rather it’s Niven, and the announcers don’t even know who she is. Guys, she has a bio on WWE.com

Naomi is muscled around by Niven, suffering a shoulder-block, a splash, and a Michinoku driver.

Winner via pinfall: Eva Marie (as announced by Eva Marie from outside the ring) 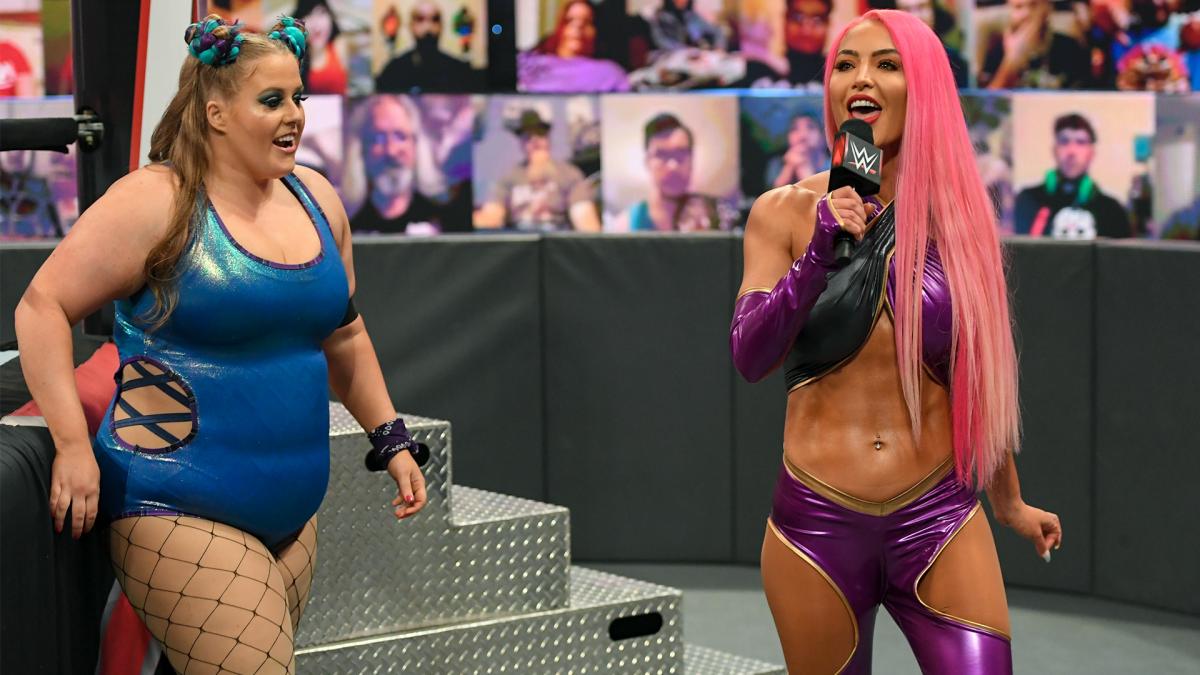 In a taped segment, Mandy Rose and Dana Brooke are doing a decidedly Divas-esque photoshoot while Women’s Tag Champs Natalya and Tamina are working out in the ring. They talk a little smack to each other before sparring.

Elsewhere, Drew McIntyre is asked about his thoughts on yet another upcoming title match. He tries to stick a new nickname on Bobby Lashley, calling him “Trashley”, but I don’t think that one’s going to last. Instead, he talks about the ingenious strategizing of Scottish hero William Wallace, claiming that his own Scottish ingenuity will bring him victory at Hell in a Cell.

Riddle cinches in the Bro-mission almost immediately on Woods, but they’re so close to the New Day’s corner that Kingston manages to tag in. They execute quick and unrelenting double-teaming on Riddle, who finally drags himself (and Woods) over to his corner and Orton tags himself in. Orton, predictably, slows things down and shows off an impressive side headlock upon entry. Kofi tags in and picks up the pace with a flying cross body and a dropkick.

After the break, RK-Bro try to prove that they’re a tag team by having Orton flip Riddle in the air, landing him on Woods before Riddle then locks in an arm-bar. Orton tags in to deliver some stomps before executing another lengthy side headlock. Once again, Woods makes the tag and Kingston comes in on fire, hitting a dropkick, a leaping clothesline, and a Boom Drop.

A missed Trouble in Paradise, though, allows Riddle to tag, who kicks and suplexes Kingston into position for a Floating Bro, but only for a two-count. After yet another break (what is this – the main event?), Woods brings Riddle crashing down with a superplex, followed by a frog splash by Kingston, but Orton breaks up the pinning attempt. Orton and Riddle land an assisted powerbomb on Woods, but it only nets a two-count. Woods dodges one RKO, but the second one finally secures the win.

Backstage, Rhea Ripley has some thoughts on her Hell in a Cell opponent, Charlotte Flair. The truth is: she doesn’t think much of her.

A quick start to this one features hard strikes by Asuka, with a headbutt response by Ripley. Asuka ties Ripley up with an arm-bar, but Ripley maneuvers out and drops Asuka with a string of short-arm clotheslines. Ripley launches herself with a dropkick, but Asuka ducks out of the way and the champ flies into the turnbuckles.

After a commercial break, Asuka punches her way out of a superplex attempt, pushing Ripley to the mat and following with a dropkick. A flying butt (it’s not a “hip-attack”) knocks Ripley down, with Asuka following with kicks to her chest. Asuka can’t quite get her Asuka Lock applied, and Ripley replies with a Riptide for the win.

You won’t believe this: Charlotte Flair arrives in the ring, but she’s changed clothes just to spice things up. She fights with Ripley, and it takes about dozen people to break them apart, with Flair walking away sporting a nosebleed.

In a backstage party room with The Hurt Business, MVP demands respect for the champ while Bobby Lashley promises to throw Drew McIntyre’s lifeless body around after publicly executing him and mounting his head on a stick. I mean, I know he was riffing on McIntyre’s William Wallace tale, but …

Bliss starts by hopping on Jax’s back, only to be tossed away with ease. Bliss changes tactics and kicks Jax to the ground by going after her legs.  Eventually, Jax manages to simply shove Bliss to the mat, but she misses a leg drop as Bliss sits up to dodge. Bliss is soon sitting on the top rope, but is momentarily distracted by Reginald getting on the apron. Not long after, Bliss hits Twisted Bliss only to be pulled out of the pinfall attempt by Reginald.

After the match, Bliss appears to hypnotize Reginald before slipping out of the ring. 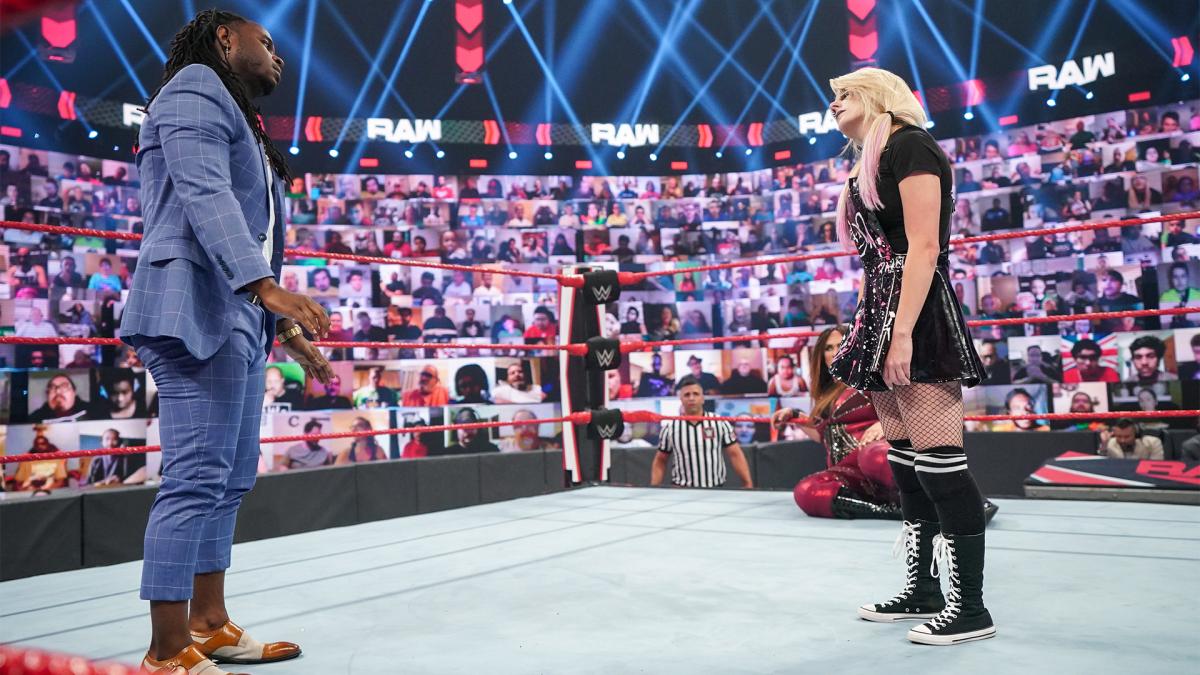 Don’t worry, Reginald eventually snapped out of it. Photo: WWE

Backstage again, MVP is chatting with The New Day and wondering if Kofi has thought any more about the notion that KofiMania can return only if he dumps his tag partner. Kofi isn’t having any of that talk … or is he?

Elias starts hot with a leaping knee to Ryker’s head, but Ryker responds in kind with a knee to the gut. Hard punches and hard chops are the highlights of this match before it spills to the floor. Ryker runs Elias back-first into the ringpost then slips into the ring. Elias thinks twice about continuing the match and walks away, taking the loss.

With The Hurt Business setting up party headquarters on the ramp, Styles opens with a hit and run offence before McIntyre throws him hard into the corner and high into the air, all with a grin on his face.  It’s not long before McIntyre is setting up  a Claymore, but everything breaks down: Omos pulls Styles to safety, Lashley marches down to the ring, and The Viking Raiders arrive on top of all that. 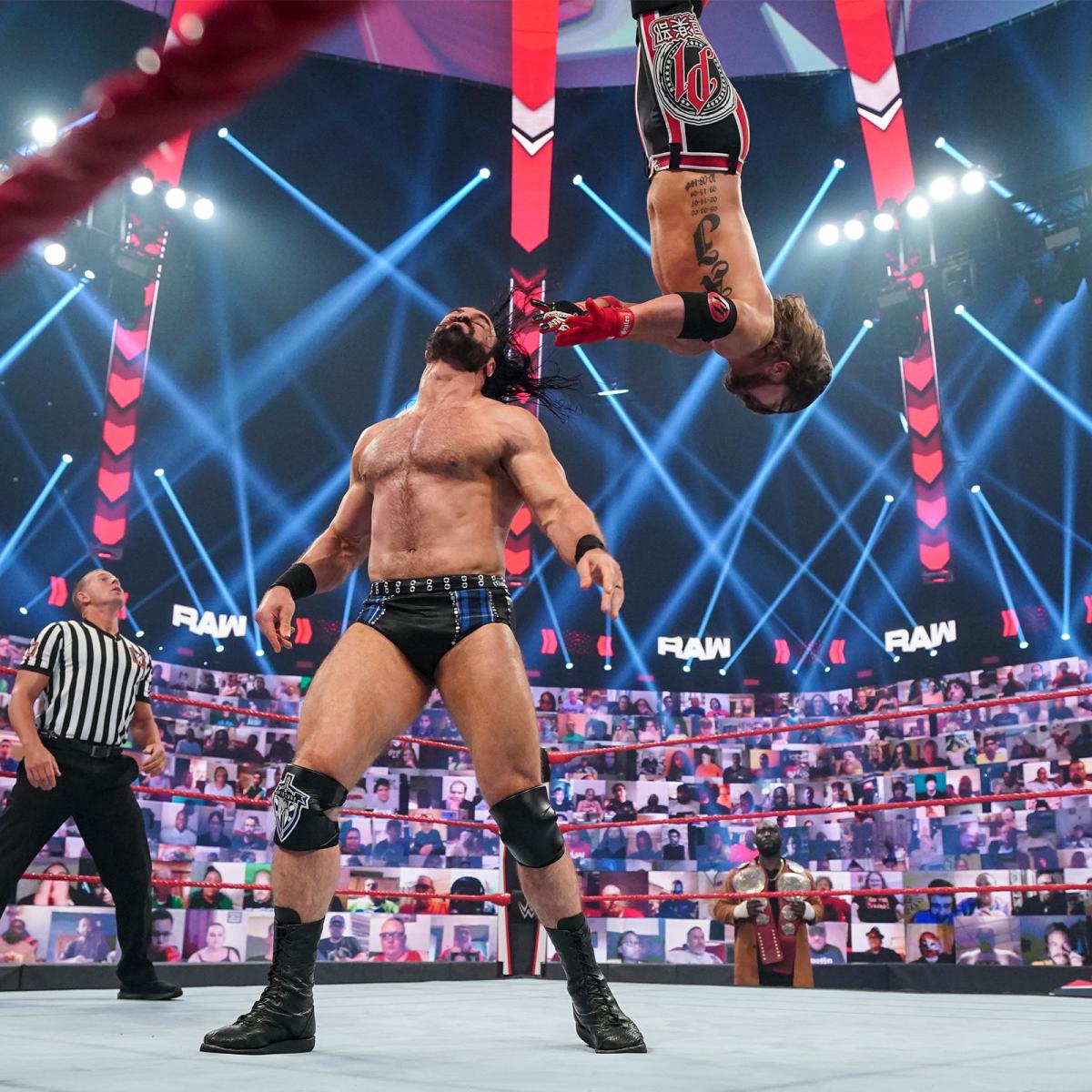 McIntyre really looks like he simply willed Styles into the air. Photo: WWE

After the break, Styles and McIntyre are back at it while all of the visitors, now including MVP, are sprinkled around ringside. Styles keeps trying to trade punches with McIntyre, but that goes the way you’d think. Instead, Styles backdrops McIntyre over the ropes, joining him on the floor to run him into the ringpost before trying to suplex the Scot back in from the apron. McIntyre powers out of the attempt, but is soon caught in a chinlock, using a jawbreaker to escape.

He knocks Styles to the mat several times with punches and clotheslines, returning the favour from earlier and backdropping Styles to the floor. When McIntyre follows him, he throws a punch at Lashley, who follows McIntyre into the ring, causing a disqualification, and a subsequent Teddy Long special: a 6-man tag match.

Erik and Ivar are double-teaming Styles, but a fight on the outside between Lashley and McIntyre distract them and gives Styles a chance to slither to his corner. Erik suffers some triple-teaming with all three of his opponents tagging in and out and delivering blows. He manages to tag out and there’s a lengthy sequence featuring him and Lashley before the announcers make a big deal of McIntyre and Omos both getting in to face one another.

Omos gets a chokehold in, but Styles tags himself into the ring and suffers a series of belly-to-belly suplexes for his troubles. Styles tumbles towards his corner, tagging in Lashley, who seems caught off-guard. He enters right into a Claymore and that’s the end.

Can a single, very good tag match between The New Day and RK-Bro save the whole three hour show? Not quite, but it did count for one out of the two points I’ll give this episode.