Kross demolishes the opposition in five-man main event of NXT TakeOver: In Your House 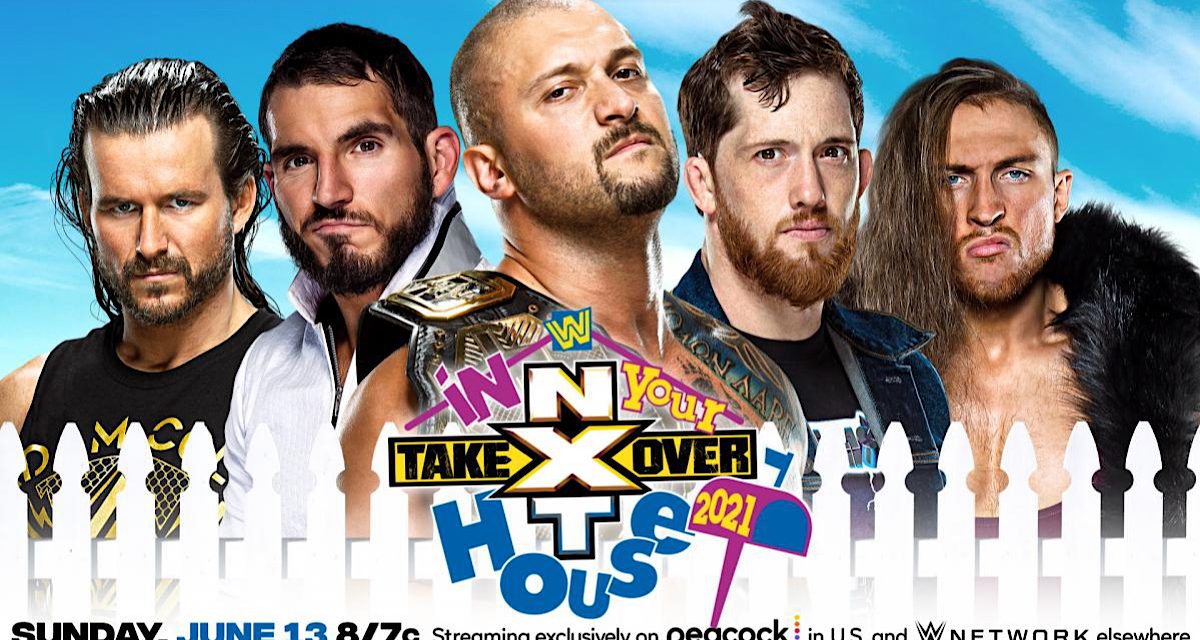 Taking a new form, over two decades since the last original, the In Your House moniker lives on under the black-and-gold brand. The annual NXT TakeOver: In Your House events began in 2020, unfortunately with an absence of fans. But tonight, a couple hundred attendees will witness the second iteration live and in person.

Said audience isn’t too impressed with Naomi Fox’s lip-synced performance of tonight’s theme song, but entering through the stage door is Todd Pettengill to officially introduce In Your House like no other!

Reminiscent of NXT TakeOver opening matches from years prior, the action is quick and exciting from the get-go. North American Champion Bronson Reed and Tag Team Champions MSK deliver some tandem offense, and the crowd finally erupts with a string of outside dives; yes, the 330-pound Reed connects too. He eventually makes the comeback against LDF until Santos Escobar delivers an impressive driver. But the champion gets revenge by pouncing Escobar through the barricade as MSK delivers the assisted hangover in-ring. To finish it, Reed delivers the Tsunami Splash to retain. With the abilities of the competitors involved, there were no lull moments. And most importantly, it awakened the audience for the remainder of tonight’s card.

Before the matchup, Todd Pettengill attempts to roll VHS footage of Martinez and Li’s first encounter in 2017, but technology of course has far surpassed him. Speaking of which, the cinematic entrance of Tian Sha looks incredible with the surrounding production. Starting the action immediately, Li utilizes her great striking and targets the opposition’s midsection. And since the matchup persists longer than a few minutes, it’s automatically Li’s best showing in some time; but to Li’s credit, her game is smooth and crisp. Martinez inevitably turns the tide, thanks to Li’s shin injury, and Boa on the outside attempts to interfere. But in-ring, Li reverses Martinez’ offense and connects with a tornado kick for the clean three.

The attack isn’t over though as Boa slides a steel chair in. However, Martinez counters and swings away at the opposition until the throned Mei Ying finally rises. She grasps Martinez’ neck and throws her into the barricade, prompting commentary to ask, “What does this mean for NXT?” If anything, you can certainly add Li to NXT’s “best women’s division” equation.

In honor of the Million Dollar Championship’s return, a video package highlighting Ted DiBiase and his strap plays while hyping up the following matchup. DiBiase himself enters the Capitol Wrestling Center with the belt encased in glass before clipping it to the rafters.

Grimes is over — “to the moon,” if you will — with the NXT audience, and they’re with him almost unanimously. A few minutes pass before the steel ladders are introduced, but Knight gains control ringside, directly in front of DiBiase. Knight, the great showman he is, inhales the jeers while working down Grimes and notably delivers a neckbreaker onto a ladder. Whenever Grimes reverses, the crowd pops big — especially when Knight connects with steel. For whatever reason though, the fan favorite diverts to grab the gold-painted ladder, which allows Knight to knock him over, and the playing field is eventually even.

After brawling around the ringside area, Grimes gets positioned high — very high — on the lighting rig and delivers a splash. But the effort isn’t enough, as Knight pushes him through a bridged ladder and ultimately captures the glass briefcase. The ring announcement is pretty surreal… the new Million Dollar Champion… LA Knight!

“I get it, guys. VHS and DVD are dead,” admits Todd Pettengill. Before he can promote the NXT merchandise sale though, Hit Row interrupts to promote their newly released entrance theme. It’s a good track, at least.

“Like hitting a brick wall,” the underdog Moon is dominated over by the champion, who showcases some big offense. The challenger, too, displays her skills with athletic reversals and maneuvers, successfully hitting a suicide dive. Outside distraction from Dakota Kai lends the champion the opportunity to deliver a superplex, but the additional big boot only offers a two-count. Moon recuperates from the damage and connects with the Eclipse, but Kai interferes with the count. Making the save though is a returning Shotzi Blackheart, who brawls with Kai towards the back while Moon delivers a DDT onto the ramp for two. Reversing the second Eclipse attempt, Gonzalez uses her power to finally connect with the finishing slam for three. Although it was solid, following the previous match was mighty tough, and this championship match is — as expected — just another tally mark on Gonzalez’ reign of destruction.

Todd Pettengill isn’t having a great night, but a game of Karate Fighters with Dexter Lumis may brighten his mood. He unfortunately makes the mistake of bringing up women, which reminds Lumis of Indi Hartwell. Game over…

In his Shawn Michaels-esque gear, Johnny Gargano walks past William Regal, who is trying and failing to separate Gonzalez, Kai, Blackheart and Moon. Commentary is increasingly mentioning how Regal is struggling to keep control around here. Will anything come of it?

People’s opinions on multi-man matches aside, it’s an NXT 2021 all-star lineup. But it’s still a mult-man matchup, and competitors appear and reappear sporadically throughout with Kross acting as the centerpiece. Clearly, the four challengers are carrion for the monstrous champion in the opening goings. Eventually though, Gargano and Dunne cooperate to smash Kross through the stage “front” door, allowing the challengers to battle alone in-ring. And since the competitors are top-tier in technicality, the clash of maneuvers is a visual treat. Bringing back fond memories of their pre-pandemic feud, Cole and Gargano commence in an enjoyable segment. But alas, Kross returns to decimate the opposition to a wave of deserved jeers.

It’s a short-lived Undisputed ERA reunion that takes out Kross, and the four challengers again display an awesome mix of reversals and what have you. Cole connects with Panama Sunrise, Dunne interferes, and Kross again arises; Dunne connects with Bitter End and later breaks the fingers to enthralled fanfare. In the latter stages, finisher warfare breaks loose, and O’Reilly cinches a deep submission on his nemesis Cole. But capitalizing on unsuspected prey, Kross applies a choke on O’Reilly which ultimately sounds the bell for championship retention.

To conclude the night, McKenzie Mitchell catches up with General Manager William Regal, who — with tears in his eyes — responds, “It’s been seven years since I became the GM of NXT, and I’ve never seen so much bedlam. It’s complete madness. I think it’s time for a change.” Regal walks away into the darkness to audible noes from the Capitol Wrestling Center — and from myself: “No!”

NXT TakeOver: In Your House

NXT TakeOver: In Your House ’21 is worth checking out, yes. Although it won’t be a standout event in the grander scheme, there are some definite highlights: the opening six-man popping the reinvigorating crowd or the fun Million Dollar Championship ladder match for example. However, with the main event, Kross being portrayed so strongly against four top contenders could signal a “pestilence (we) can not endure” for his assumably long reign. Nevertheless… it was admittedly a great “big match” main event to headline tonight’s show.