AEW Dynamite: Young Bucks end the night with their belts but without their kicks 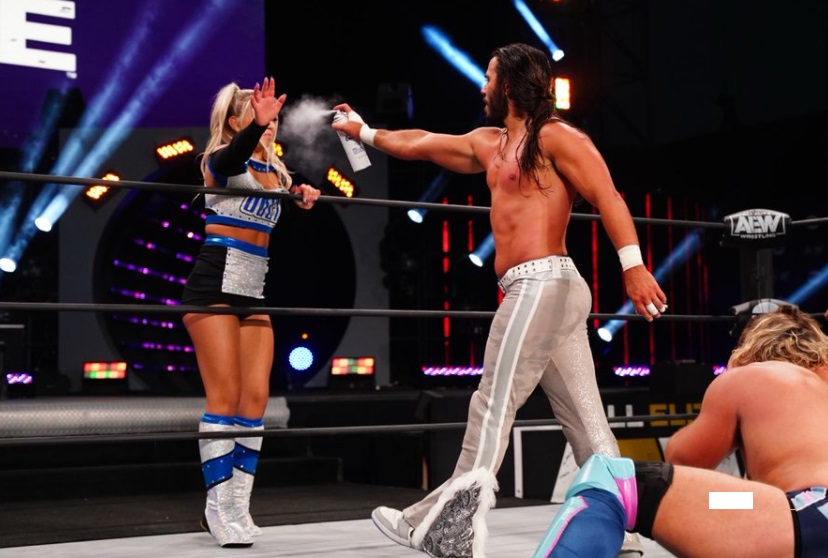 In case you missed the news, our nights together with AEW and TNT are coming to an end. Not right away, mind you, but in 2022, when Dynamite will depart for TBS, bringing back fond memories of wrestling from long ago and clearing the way for TNT to show both basketball and hockey. But that’s tomorrow. For tonight, we’ve still got AEW Dynamite and we’re closing in on Double or Nothing. So save the goodbyes for later and let’s head to the ring.

Is Matt Sydal turning heel? It feels weird to do that given he’s not a very big dude and didn’t seem to be fully over as a face, which is when the turn has the most impact. Taz is on commentary without any of his team members in action, a rarity, though he has a running beef with Christian. Since he’s undefeated in AEW, it’s no surprise that Cage goes over, and the sign of respect from Sydal answers any questions about him going bad.

Taz and his guys have apparently outsmarted Christian, as Team Taz attacks from the crowd after a brief distraction by Ricky Starks from the stage. Adam Page literally tells Starks to hold his beer and heads down for an attempted rescue, faring well for a spell but eventually falling victim to the numbers game.

Because someone has to be the number one contenders for the tag team belts, the Varsity Blonds are getting a title shot tonight. Brian Pillman Jr. and Griff Garrison get to cut a promo, which is rare and not that bad. Still not sure it’s going to help them later.

Speaking of tag teams, we hear from the always hilarious pairing of Eddie Kingston and Jon Moxley, and the not as funny but still not horrible duo known as The Acclaimed.

Jon Moxley and Eddie Kingston vs. The Acclaimed

Does Max Caster cross a line when he says Jon’s wife is in his DMs asking them about some “oral sessions”? That depends on whether you buy his partner’s explanation that they’re merely talking about a podcast. My son points out that Caster is wearing one of the largest chains known to man, which is some impressive foreshadowing as the Acclaimed tries to use both said chain and the boom box as weapons. Their efforts backfire, however. Cheating doesn’t pay, kids.

Intrepid newsman Alex Marvez wants the scoop on whether the Inner Circle will accept the Stadium Stampede 2 challenge, but Chris Jericho says he’ll have to wait like everyone else. Dean Malenko is there as well, making a funny comment about how Jericho knows four more holds than him. Kids, you’ll have to look that one up in the WCW archives.

Are Mox and Eddie about to become the top tag team contenders? One team who probably would say no is out talking to Tony Schiavone, consisting of Ethan Page and Scorpio Sky. Thing is, they have a rivalry going with Sting and Darby Allin, both of whom they call out in their promo. Page is good on the mic but could stand to yell a little less. Anyway, in a case of being careful what you ask for, Sting and Allin arrive and put a beating on them, and the Dark Order keeps the heels from even being able to retreat to the locker room.

The members of The Pinnacle are enjoying a nice meal while roughing up the poor waiter (who gets a stack of bills from Tully Blanchard for his trouble) and griping about having to deal with Inner Circle when they should be going after all the gold.

Having your lackey wrestle the champ to soften them up is a classic heel move. Dr. Baker takes exception to Shida pulling on a doctor’s glove and threatening to use the Lockjaw, and the ensuing chaos allows Rebel to strike with a crutch shot to the back. It matters not in the end, with Rebel tapping out. Baker gets the last laugh with a post-match assault.

Ever the caring individuals, Don Callis and Kenny Omega offer Orange Cassidy the chance to have a title shot down the road, when he’s healthier, if he bows out of the triple threat match at Double or Nothing. When he rips up the contract, Omega makes another pitch, this time more of a threat. Callis prepared, however, producing a second, identical document and giving him a day or so to think it over.

The Inner Circle takes to the ring to speak, man by man, about whether they want to accept the Pinnacle’s challenge. Sammy Guevara gets the fans to start a “dumbass fishes” chant, which is something different. Part of Jericho’s speech concerns whether Blood and Guts was worth it, and he admits that MJF hurt him both physically and mentally. “Was it worth it?” he asks rhetorically, before confirming that it was because it’s motivating him for revenge. The answer is an emphatic yes, as if you didn’t already know that.

In what regular readers know is my least favorite ongoing storyline, Jade Cargill gets one final (hopefully) offer from a manager, but she’s more upset that he barged into her promo time. Look, just hook her up with a manager or don’t.

The narrative here is that Deeb is just returning from injury, while Velvet is on a pretty impressive hot streak. It makes sense for Velvet to go over here since she’s been getting a decent push in 2021, but this could also be a classic “do well in a close call” rub just as easily. There are some genuinely close near falls as the match reaches its endgame, which ends when Deeb smashes Velvet’s knee repeatedly into the mat to soften her up for the Serenity Lock. That’s extra logical by pro wrestling standards.

No one plays the “people are against me card” better and more often than Pac. He’s certainly ready for his main event in two Sundays.

The announcers mention Ogogo’s eye injury that has left him about 70% blind in one eye, ending his pro boxing career prematurely. The build for this guy as a lethal body puncher continues, as he bloodies poor Gunn and the ref has to call for the bell. The obligatory faceoff with Cody comes next.

With SCU calling it quits, Christopher Daniels whisper something to Frankie Kazarian instead of answering a question about what’s next for him. Frankie is much more certain about what he wants to do next: hunt down every member of the Elite and introducing them to the same kind of loss he just suffered. Frankie Kazarian as the Punisher is something I could get behind.

You know when they say “we will hear from Miro tonight”? This is that time, with the new TNT Champion feeling pretty good about how he took away what Darby Allin said could not be taken. He’ll defend the belt next week on Dynamite but is confident he’ll destroy whoever it is. Lance Archer is up next for Miro at the pay-per-view too, and he comes out to make us all question why he isn’t allowed to cut promos more often. Seriously, he’s not bad.

Callis slides into a spot at the announce table to give us a four-man booth for the main event. The Blonds get off to a quick start, and even Don pays them some compliments. There’s something of a Griff Garrison appreciation motif going on as well, which is understandable because he’s a guy who seems to have all the tools and just needs more reps. Brian Pillman Jr. also gets a showcase stint, which ends when he gets sprayed in the face with the cold spray while in a submission hold. Julia Hart tries to play whistleblower but gets sprayed in the face as well. Pillman holds on for a while in the Sharpshooter but ends up tapping out.

No time to celebrate for the Bucks as Moxley and Kingston wander into the ring. They quickly attack and choke out both Jackson brothers, then set to work stealing the Jordan 1 Retro High Diors from Matt and Nick. Let’s run down the card for Double or Nothing and we’ll see you in … Oh, wait. My usual closing line doesn’t apply here. Let’s explore why.

When will the next episode of AEW Dynamite air?

With the NBA Playoffs about to take flight, Dynamite might have some issues airing in its usual time slot. Next week is a great example, as the show is being bumped a few days and hours. The next episode of AEW Dynamite will air at 10 p.m. ET on Friday, May 28, making it the perfect start to Double or Nothing weekend. Will I get bonus pay for working the weekend? We’ll find out next week!

Solid but not spectacular is the most apt way to sum up this edition of Dynamite, which is fine since not every week can be pedal to the metal. What has been consistent is the build up to Double or Nothing, which has been among the best leading to any AEW PPV, and certainly the best since the pandemic began. It’s beginning to feel like AEW is headed back to its pre-COVID state, and that is a good feeling indeed.