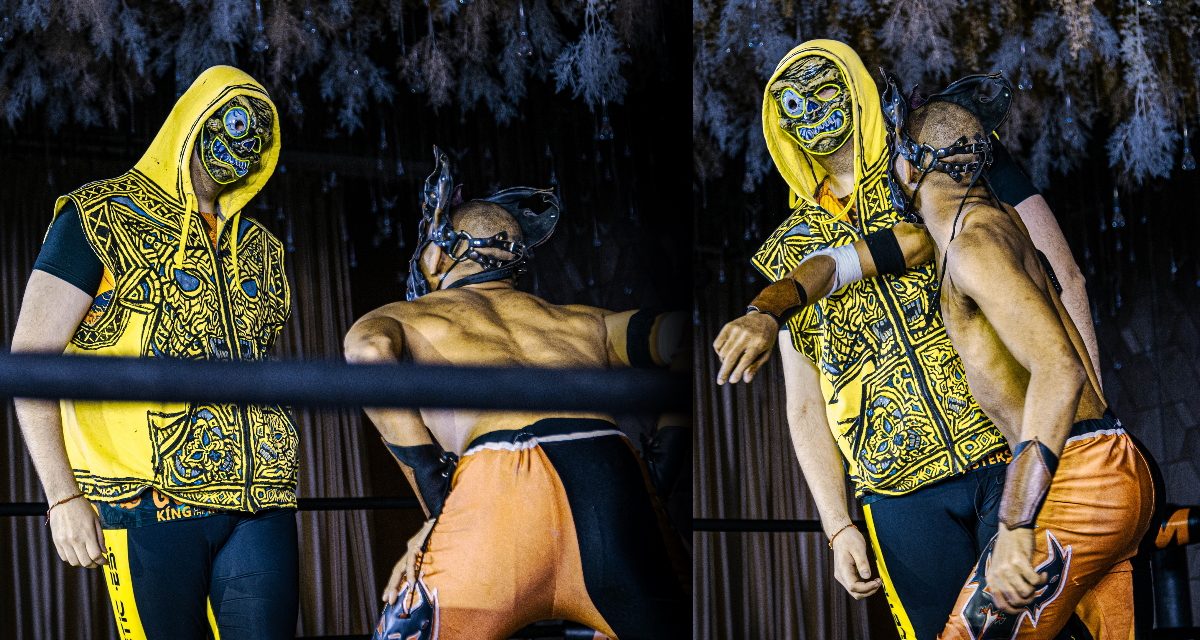 Before the bell Steve pisses off Sam and gets chased off.

Ash offers a handshake to start but Tao refuses. The two spryer members of the teams start off with an even energetic exchange of chain wrestling, striking, rope to rope and corner to corner action. Ash finally catches Tao as he jumps off the middle and T-bone suplexes him for two. 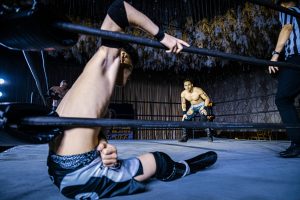 Ash tags in Sam and they begin the rule breaking and double teaming with chokes. Tao is able to fight out of the corner with a series of kicks on both men but ultimately gets shut down with a tackle from Sam. Sam continues the powerful punishment then sends Tao to his corner and summons “your teacher”.

Steve is hesitant, coming in with his hands up. He offers Sam a hand but quickly resorts to an eye gouge. Steve unloads elbows to the back of Sam’s head but he too gets stopped by a massive tackle.

Sam slams, and chokes Steve with Ash’s help out behind the ref’s back. Ash comes in and covers for two. He gets in the ref’s face about it, as he turns around Tao comes off the top with an illegal cross body.

This allows Steve to take control. Ash shows some fight but Steve shuts him down and slams him.

Steve holds Ash for Tao who comes off the top and misses, hitting Steve.

Sam gets in and gorilla presses Tao onto Steve. Sam and Steve are in control of both their opponents all at once in the ring, finally hitting The Stableizer for the finish. 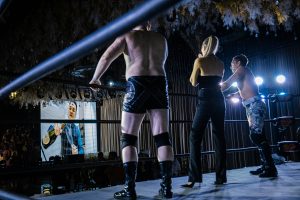 The Stable looks on as their manager ChairmanAl celebrates their victory on the entranceway big screen. (Photo: MKW)

As The Stable celebrates in the ring, their manager Chairman Al celebrates on the screen with a bottle of champagne. He produces the mystery box again, sayings he has a surprise for Ash in it. He says every member of The Stable knows what’s inside the box, except for Ash but Ash will know too very soon.

This match is from the Pro Wrestling Society Dojo in South Korea.

The ref is wearing a skull mask and these wrestlers seem very green.

Things start off fast with Lee and Mir. Lots of strikes and high flying lucha from Lee. Now the ladies are in. Rouge immediately with a go behind and controls her opponent chaining hold to hold. She definitely has solid experience but Roxie slips out of a slam and tags Mir. Mir keeps her in his corner as he and Roxie tag in and out. Roxie eventually tosses Rouge into Lee’s corner awkwardly.

Mir hits Lee off the apron for no reason. Rouge is showing little to no desire to get to her partner for a tag, but finally does so after a jawbreaker and head kick.

Lee gets tagged and puts Mir down with solid kicks then some nice palm strikes repeatedly to the head. An amazing dropsault, enzugiri combo gets Roxie in to help but Rouge dispatches her to the outside quickly. The two send Mir to the ropes then hit him with successive dropkicks for two.

Lee grabs Roxie but she hits him with a low blow. Mir capitalizes with a Michinoku Driver, curbstomp combo on Rouge for the win.

Johnny barely registers Dragon’s initial elbows. One from Johnny sends Dragon across the ring to a knee. Dragon ducks a line and sends Johnny to his knee with a low dropkick then shining wizards the giant and leg drops for two.

But Johnny catches a cross body and turns the tables with a slam. Repeated knees by Johnny for two.

Cold Ray chokes and hits Dragon and the ref barely gives a damn.

Johnny turns things around during a replay and he’s now bleeding from the nose. He avalanches Dragon in a corner. Vader Bomb and two again. Dragon rolls to the outside but Cold Ray sends him back in. 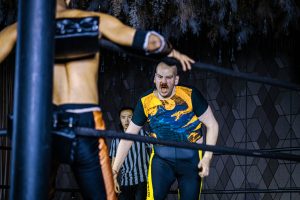 Johnny runs at Dragon in the corner but gets booted in the face. Dragon jumps off the middle with a line and covers but Cold Ray slides in and begins to clobber him. The ref admonishes him but Cold Ray tosses the official to the outside.

Cold Ray gets the belt and runs at Dragon who moves and Johnny takes the hit.

Dragon goes under the ring and produces a glass skull bottle filled with a green liquid. He pours the stuff into his and Johnny’s mouths. Dragon seems to have Zombified Little Johnny and is able to command him. Ultimately down to the mat to be covered for three.

Opening Tag Tournament match was very solid. Second match from PWS featured awkward, seemingly inexperienced heels. Although Rouge was a solid wrestler you couldn’t tell she was in a tag match. Lee was only in there for a bit but was very impressive. Main event started of good. But the ref’s rule enforcement was confusing. They tried something different for the finish but it too was awkward.