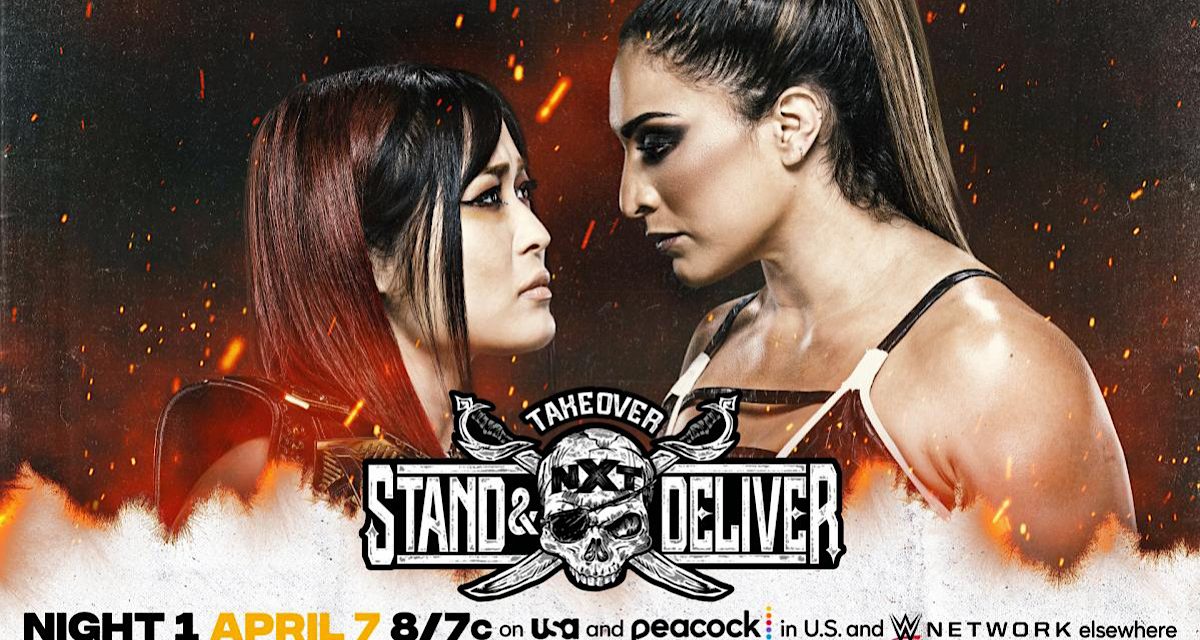 The black-and-gold brand presented a major first with Night 1 of the inaugural two-night TakeOver event structure. From first to final though, tonight’s event marked the ending of NXT’s weekly Wednesday scheduling. Going out with a bang, Night 1 of NXT TakeOver: Stand and Deliver hit a storybook peak.

Guitarist Nita Strauss opened the show with a rendition of “The Star-Spangled Banner” as the Capitol Wrestling Center lights flashed and an increased amount of physical audience members cheered. What followed was a great card of matches and championship victories, which will hopefully carry forward to Tuesday nights!

The smooth, intense technical wrestling commences immediately, and those enamored by the calculated style are getting a treat. The chess game quickly becomes a slugfest, as Dunne then snaps Kushida’s fingers before picture-in-picture. For Peacock viewers, tonight’s in-ring action is being broadcasted commercial free! Subsequently, the match pace doesn’t falter as both competitors place their feet firmly on the gas pedal. After barely escaping the Hoverboard Lock, Dunne again targets the fingers and thereafter delivers the Bitter End for three. Dunne, who additionally debuts a great revamped theme song, deservedly wins the title of “best technical wrestler in NXT” in an exciting opener.

Leon Ruff brawls wildly with his rival Isaiah “Swerve” Scott, pulling off eye-catching maneuvers like a jumping cutter from the announce desk and top-rope hurricanrana reversal. He’s however manhandled and squashed by the next entrant Bronson Reed; the “one more time” chant makes a triumphant and successful return with ringside fans present. Reed delivers a double German suplex before Cameron Grimes sashays down and bribes Scott for teamwork, which works surprisingly well. Dexter Lumis makes his entrance as Ruff is pinned by Scott.

Lumis cleans house with impressive agility preceding the arrival of LA Knight. “Lemme talk to ya,” says Knight with a microphone in-hand; his promo is interrupted by Reed who regains control. The former shortly redeems himself by eliminating Lumis, but the favor is returned by Reed who eliminates Knight. It’s been a disappointing month for the newcomer — no defending it. The three remaining competitors trade blows, and Scott pins Grimes with a fistful of tights. Scott keeps the pressure going by slamming Reed atop the apron and delivering a 450 splash for two! It’s been an undeniable standout match for Scott, but he cannot defeat “The Colossal”. Reed hits an emphatic Tsunami Splash for three, capping off a gauntlet that exceeded expectations.

“Can Tommaso Ciampa turn back the clock” is this matchup’s leading storyline. No time manipulation from a Christopher Nolan movie could win himself advantage over the Austrian god in WALTER — although Ciampa looks in amazing shape. He flurries onto the champion, but momentum is halted by a signature WALTER chop. The latter misses a chop and instead legitimately mangles the announce desk cover which gives Ciampa some leverage over the hand; WALTER however keeps control. Ciampa returns with numerous closelines (quite possibly like 20), and WALTER remains standing! Ciampa finallys floors him and delivers an Air Raid Crash for two.

The challenger successfully delivers the Fairy Tale Ending for two, targets the injured hand and hits a top-rope Air Raid Crash for another kick-out. The competitors trade brutal chops, but WALTER takes advantage by exposing the neck and delivering a barrage of powerbombs. WALTER hits one final chop to retain and continue his incredible, historic reign. There is nobody in professional wrestling with the aura of WALTER right now.

Franky Monet will “see you next Tuesday” according to the newest vignette. Now, is Franky Monet the debuting Taya Valkyrie or conversely her small dog?

Bronson Reed is interviewed backstage about his championship matchup with — speak of the devil — Johnny Gargano. The champion is “fresh as a daisy” and shows no fear.

It’s triple-threat tag team rules, meaning this will inevitably be chaotic. After GYV’s James Drake eventually subdues the offense, MSK and subsequently LDF hit ringside dives onto the mass. The latter team hits stereo Coast to Coasts before GYV’s Zack Gibson breaks the pin, as Raul Mendoza and Joaquin Wilde get their offensive turn. The luchadores control the momentum until MSK’s Wes Lee makes the striking comeback. This guy floats! But the dastardly GYV attacks the injured hand of Lee before the action entirely breaks loose. LDF is consecutively taken out by ringside finishers as the remaining two rival teams tussle. Ultimately, the lifelong dream comes true as MSK hits the hangover finish for three! With countless mind-blowing maneuvers, all six competitors had incredible showings.

The challenger has considerable size advantage, but Shirai takes early control regardless. She dives onto Gonzalez ringside, but Dakota Kai makes an ill-conceived interference which gets her removed. All alone, Gonzalez finally gets a one-up and continues the downward pressure until the champion reverses with a Tiger Feint Kick and springboard dropkick for two. Shirai then applies a Crossface and successfully moonsaults Gonzalez atop the elevated ramp. From up above, Shirai jumps from the giant skull onto her opponent!

The champion hits her finishing moonsault for two, as commentators remind everyone that Gonzalez is the first and only survivor. The latter hits her signature slam outside and decapitates Shirai with an awesome closeline. Gonzalez finally slams the champion once again for victory! Shirai’s reign comes to a close as Gonzalez begins an inevitable legacy of her own.

If Takeover Stand & Deliver: Night 1 counts as a weekly episode, it was NXT’s best in many, many months. Every match had a unique flavor and certainly stood and delivered (I tried not to, I swear). The main event had a tough position following two outstanding bouts beforehand but carried its own. That being said, those aforementioned two matches were crazy good!