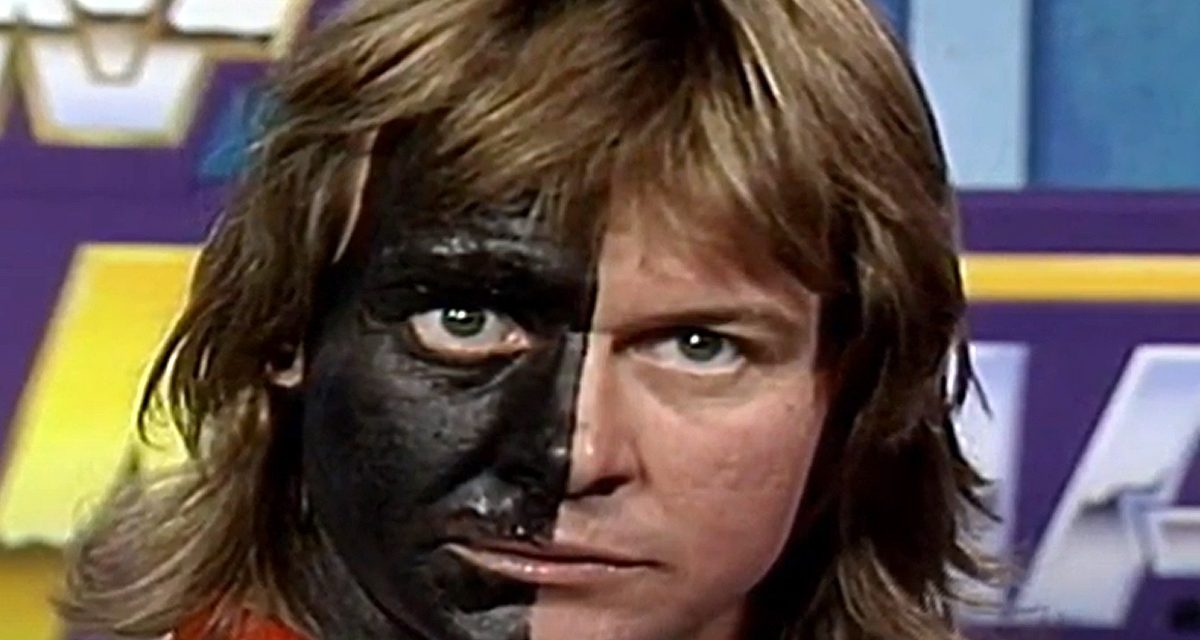 Peacock has joined the current wave of censorship by American streaming services over what they deem as “inappropriate content”.

Keen fans have noticed that when it comes to Wrestlemania VI, a certain match has been totally removed from the Peacock version:  Roddy Piper’s grudge match against ‘Bad News’ Brown.

Before the match, Roddy Piper is interviewed backstage and reveals he has painted himself half black.

“You could say, I am a little two-faced but you Bad News Brown, you’ve got one face. A face that needs a little customizing,” says Piper in his promo.

Piper goes on to say that he has two personas: ‘Hot Rod’ and ‘Hot Scot’ and that even Piper isn’t sure which will show up at their grudge match.

In 2012, Piper was interviewed by The Score and had this to say about the match.

“First of all, I was born in Saskatoon. There are no black people that I know of that are dumb enough to go to a place that cold so there’s no racism in me at all,” he said.

He described a meeting between himself, Vince McMahon, Bad News and Pat Patterson where they were told they would be involved in a grudge match at WrestleMania.

“I’m thinking Nelson Mandela at that time had said something that really stuck with me. Nelson Mandela was put in jail for 20-some years for political crimes. Every morning, he was the first man when the guard came to extend his hand to the guard. What a hell of a man. At the same time, Cindy Lauper had ‘True Colors’ out. In my mind, what I was trying to do — there is no difference. I needed material on Bad News Brown. I did something where I sang ‘True Colors’ and I did a thing about Nelson Mandela but they don’t seem to remember that,” he said.

Piper told Slam Wrestling about the prank Andre pulled on him after the match.

“They had a solvent to take it off. Then Andre The Giant, that dog — I can say that now because he’s dead, God bless him — and Arnold Skaaland took the clear solution out and put water in it. So I finish the fight, I go back to the makeup lady. I spend 10 minutes [scrubbing]. ‘Excuse me, I’m starting to bleed!” he said.

In an interview with Title Match Wrestling on YouTube, posted in 2020, Bad News (Allen Coage) had this to say about the angle.

“I thought it was the stupidest thing I had ever seen,” said Coage (who died in 2007), that both Vince McMahon and Piper thought it was a great idea at the time.

When it comes to Survivor Series 2005, Peacock has removed a backstage interview segment in which Vince McMahon uses the “N-word’ in trying to be ‘hip’ to John Cena’s rap lingo. He then walks by Booker T and addresses him the same way. Like Cena, Booker T is shocked, stunned and ticked off at McMahon’s attempt to be “cool”.

Here are just a few of the censorship decisions made by American streaming services in the last few years:

In 2015, Netflix complied with a written demand from the New Zealand Film and Video Labeling Body to remove The Bridge from the service in New Zealand only. The film is classified as “objectionable” in the country.

In 2017, Netflix complied with a written demand from the Vietnamese Authority of Broadcasting and Electronic Information (ABEI) to remove Full Metal Jacket from the service in Vietnam only.

In 2017, Netflix complied with a written demand from the German Commission for Youth Protection (KJM) to remove Night of the Living Dead from the service in Germany only. A version of the film is banned in the country.

In 2018, Netflix complied with a written demand from the Singapore Infocomm Media Development Authority (IMDA) to remove Cooking on High, The Legend of 420, and Disjointed from the service in Singapore only.

In 2019, Netflix complied with a written demand from the Saudi Communication and Information Technology Commission to remove one episode—“Saudi Arabia”—from the series Patriot Act with Hasan Minhaj from the service in Saudi Arabia only.

In 2019, Netflix received a written demand from the Singapore Infocomm Media Development Authority (IMDA) to remove The Last Temptation of Christ from the service in Singapore only. The film is banned in the country.

In 2020, Netflix  complied with a written demand from the Singapore Infocomm Media Development Authority (IMDA) to remove The Last Hangover from the service in Singapore only.

HBO Max removed Gone with the Wind for a time and has replaced Yosemite Sam’s trademark guns with a scythe in their Looney Tunes content.

EDITOR’S NOTE: A quote attributed to Allen Coage (Bad News Brown) was wrongly attributed to 2020; Coage died in 2007. It has been corrected.

Black mark on Piper after WM6