Where’s the kaboom? Moxley-Omega not the first time things didn’t go as planned 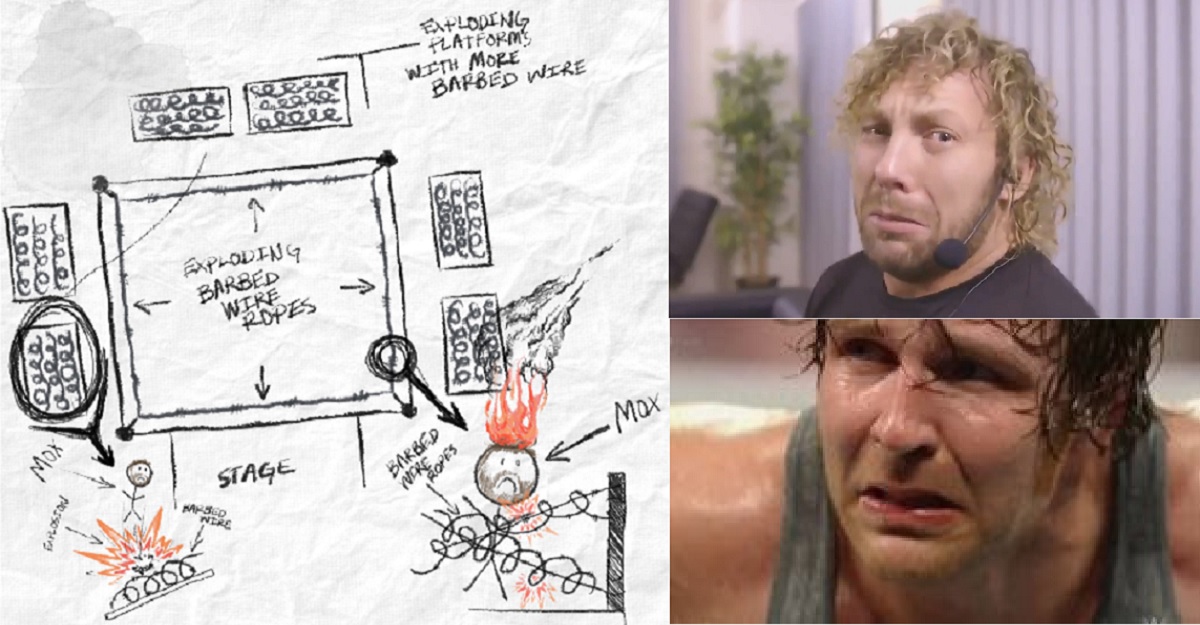 To quote Marvin the Martian, “Where’s the kaboom? There was supposed to be an earth-shattering kaboom.” That was the sentiment expressed by everyone who watched Sunday night’s AEW Revolution pay-per-view event.

The ending of the show saw Jon Moxley and Eddie Kingston trapped in the ring as the timer counted down to what was teased to be a giant explosion in and around the ring, but ended up being a limp display of fireworks that might have otherwise heralded a Gillberg entrance.

After the event, the internet broke with AEW detractors dumping all over the incident, while the AEW faithful defended it. AEW seems to have even embraced it – or at least are running with a plan to retcon the situation – with Moxley tweeting out a dig at Kenny Omega for building (in storyline) a defective product, comments echoed by owner Tony Khan in his post-show media scrum.

Botch or not, this is hardly the first time that a lofty attempt at a spectacular main event didn’t go as planned. Here are some other historical failures when wrestling tried gimmick matches that proved to be ultimately over-ambitious.

What’s more scary than being electrocuted? Simple: the execution of this debacle, which saw Sting, the Steiner Brothers, and El Gigante (scary enough in his own right) take on Cactus Jack, Big Van Vader, the Diamond Studd, and Abdullah the Butcher in a brawl that could only end by putting a member of the opposing team into an electric chair and flipping the switch.

After a pretty lacklustre brawl, Rick Steiner reversed an attempt by Abby to put him in the chair. Cactus Jack, not seeing the swap, turned the chair on and Abby was toast.

As you can see from the performance, although this match promised that someone would be cooked like an item from Abby’s BBQ restaurant, the only take-away was a bunch of hammy acting and cheesy effects.

After a build-up that saw the Big Boss Man kill Al Snow’s dog Pepper and serve it to Snow as a meal, Snow was rabid for revenge. Rather than sleeping dogs lie, Snow demanded revenge, and so the Kennel from Hell match was born.

In this variation of Hell in the Cell,  a standard steel cage was set up around the ring which was in turn surrounded by the Hell in a Cell structure. The objective was to escape both cages, with the winner taking the 24/7 Title. Making the task more difficult was a pack of vicious Rottweilers that circled the floor between the cages, pounced and ready to chomp and shred either of the men who dared enter their domain.

In theory, anyway. Check out what really happened in this video.

As if a show with every match held in a steel cage wasn’t enough, TNA decided to add some ketchup to the stupid by presenting one match in an “electrified” cage. This one saw the legendary Team 3-D trying to dethrone the NWA tag team champions LAX in order to add those titles to their resume and cement their legacy as the best team of all time.

Well, perhaps they can put an asterisk beside this match on that list, because of how bad it was. Actually, the match itself was fine – a typical Team 3-D match. But the it was the lackluster effects used to show the “electrification” of the cage that was shockingly bad.

Basically, as can be seen at the 2:50 mark on the video, this consisted of some overlaid buzzing sound effects and the seizure-inducing flickering of the lights like you’d see in a ’90s dance club.

On paper, this idea may have worked. But live and in 3-D? Not so much.

This match is unlike the others on the list because, aside from one ultra-disappointing moment, it actually is revered as being a very good match, and some consider this as being one of the best deathmatches of all time.

This match saw Cactus Jack (aka Mick Foley) take on Terry Funk in the finals of the IWA King of the Death Match.

After delivering one of his career-best promos – in any character – Foley was determined to live up to the hype in the match against his friend/mentor/hero Funk. And, boy, did they deliver, using the barbed wire and weapons with great aplomb in an entertaining violent showcase.

And then… the climactic moment was set to happen. An explosion that threatened to maim and possibly cause career-ending or worse damage to anyone caught inside the inferno.

Just like the ending of the PPV, the promised explosion ended up being not much more than a popcorn fart accompanied by the weak visual of sparklers crackling like they were on a seven-year old girl’s unicorn birthday cake. Funk shared his memories about it with us a few years ago.

But despite that embarrassing display, Funk and Foley were able to turn it around. Because that wasn’t the actual climax of the match – or the show – they continued the match, upped the violence, and turned lemons into lemonade that will live on forever in the minds of wrestling fans as a classic.

Unfortunately, because of the circumstances, Moxley and Omega’s match will likely never be seen in the same light.

Which is too bad. Because, from bell to bell, they actually put on a very good barbed wire deathmatch. The story-telling was good, the use of the barbed wire was smart and used to good effect, and it checked all the boxes in terms of blood and violence.

Instead, the failure came from two other reasons.

First, billing this as an exploding barbed wire deathmatch, because all of the explosions throughout the match – not just the show-ender – looked weak, mistimed, and pathetic.

Second, because the big non-explosion happened at the end of the show, making it the final impression of the entire event. Because it failed so bad, it overshadowed everything else on the show, good or bad. At least in the majority of discussions online.

But, like WCW, TNA/Impact, WWE, and Cactus Jack and Mick Foley, AEW will undoubtedly get past this. And this match will be looked back in a few years as nothing more than a funny moment in wrestling history.