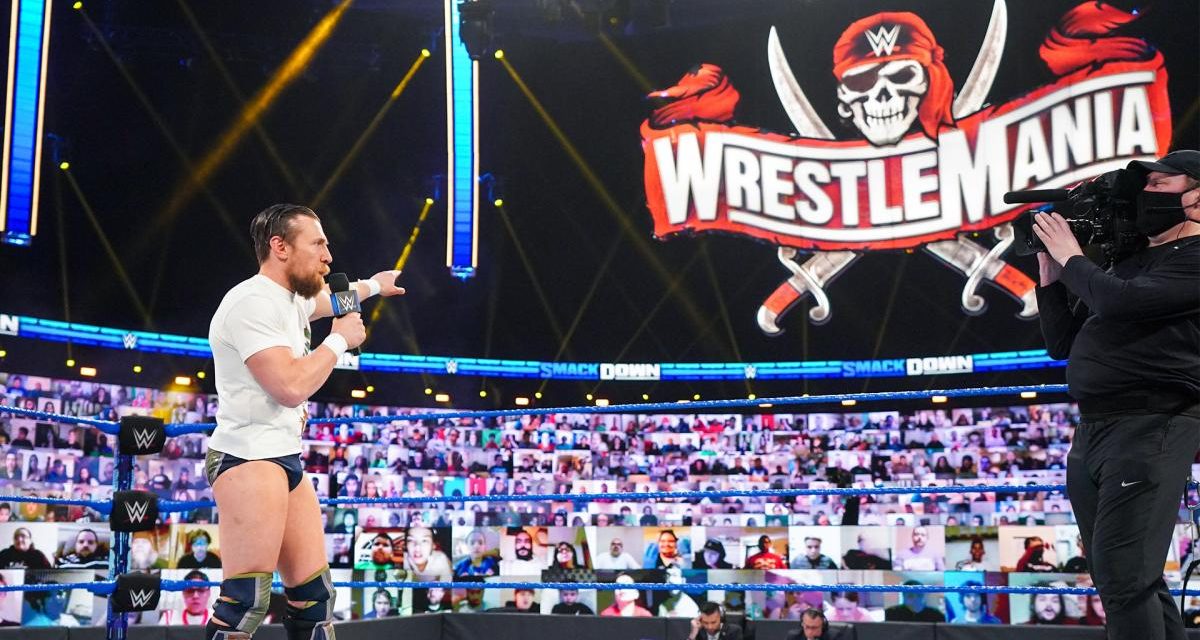 Featuring a cage match to determine if Daniel Bryan gets a title shot at Fastlane, this March 5th episode of SmackDown hosts the return of a familiar Superstar.

We start off the show with Michael Cole, who welcomes Daniel Bryan to the ring. He talks about Bryan’s cage match tonight against Jey Uso, the one that could give him a title shot by winning. Bryan says he never even wanted to have the tag match at Fastlane with Edge (against Reigns and Uso), he just got put into it. He knows that Edge VS Roman is a dream match, but Bryan is going to do his best to make sure that match never happens. He shows a video package retelling his valiant effort against Roman Reigns at Elimination Chamber, and Edge swooping in at the end to challenge Roman. Bryan says that he’s been beaten up a lot in his career, but the loss against Roman, followed by Edge’s challenge, made him feel like a failure. He says he knows he loves wrestling, and he’s going to beat Jey because this might be his last chance at main eventing WrestleMania.

Roman Reigns interrupts him, and says he sounds like a different man. He says that Bryan was never this ambitious, Roman is the ambitious one. He says he loves wrestling more than Bryan, since wrestling needs Roman, but Bryan needs wrestling. Bryan tries to respond, but Jey slaps the mic out of his hand and taunts him. Jey goes for a cheap shot, but Bryan is ready this time, and he tosses him out of the ring.

The Street Profits come out, prepared for their tag match against Sami Zayn and King Corbin, but Corbin refuses to tag with Sami, instead challenging the Profits to two singles matches.

Corbin uses his power to rough up Ford at first, but Ford strikes with a series of dropkicks. Corbin reclaims control with a massive spinebuster before attacking the midsection of Ford and slamming him to the mat. Ford locks in a sleeper hold, and when Corbin fights out, Ford delivers a series of kicks, a spinning splash, a DDT, and a standing moonsault, but it’s not enough to take out Corbin. Ford looks for an attack from the top rope, but Sami distracts him. Corbin looks to roll up Ford from behind, but Ford catches him with an enzuigiri, However, Corbin recovers immediately and delivers the End of Days for the win.

After the match, Sami tells Corbin that he should help him, since Sami distracted Ford. Dawkins shoves Sami off the apron and into Corbin. The King gets frustrated and leaves Sami to himself.

The match starts during the commercial break, so the first of it we see has Dawkins in complete control of Sami, shoving him around with a shoulder tackle and slamming him into the turnbuckles. Dawkins delivers a dropkick to Sami for 2, and Sami rolls outside. Dawkins follows him, and Sami bounces Dawkins off the barricade before bringing him back into the ring to pin him for 2. Sami strikes with a massive clothesline and pins Dawkins for another 2, and Sami gets frustrated and attempts pins on Dawkins two more times, still only getting 2 counts. Dawkins regains momentum with a clothesline, a corner splash, and a bulldog for 2, before delivering the Silencer for a close 2. 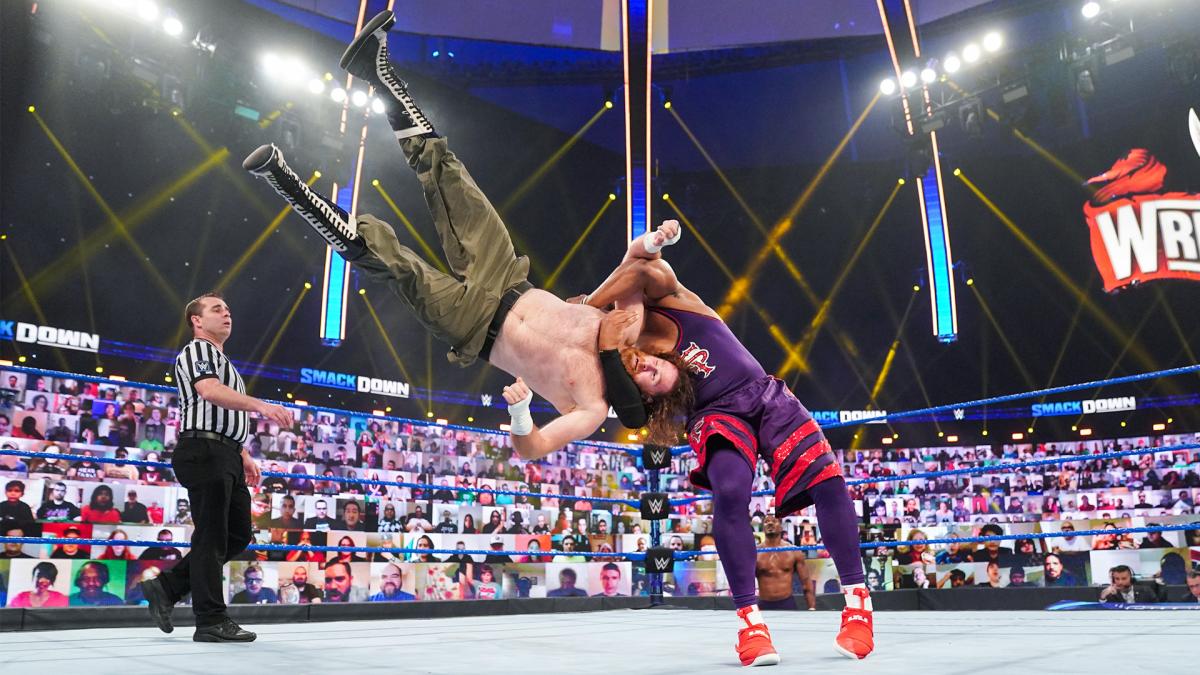 I’m glad this move has a name now, because it’s quite cool. Photo: WWE

Sami rolls to the apron and hangs up Dawkins on the ropes before looking for the Blue Thunder Bomb, but Dawkins blocks it. Dawkins goes for a spinning splash, but Sami moves, delivers an exploder in the corner, and looks for a Helluva Kick. However, Ford gets his face right in front of the cameras of Sami’s documentary crew, distracting Sami. The distraction allows Dawkins to regain his composure and roll Sami up for the win. Sami realizes one of the doc crew apparently isn’t someone he hired, and takes out his anger on him with some knees to the gut. As I have learned in English class, that’s what’s called displacement.

Backstage, Carmella tracks down Reginald and slaps his champagne tray out of his hand. She says that he has obsessed over Sasha Banks too much, and fires him.

Gable uses his mat wrestling expertise to ground Dominik at first, but Dominik strikes with an arm drag. Gable regains control by targeting the left leg of Dominik, delivering a dragon screw for 2. He cinches in a leg lock, but Dominik fights out and delivers an enziguri. Gable stacks Dominik up on the ropes, but Dominik delivers a hurricanrana before looking for a tornado DDT. Gable dodges and delivers a gorgeous tiger suplex for a close 2. Gable looks for a moonsault, but Dominik dodges it and rolls Gable up for the win. 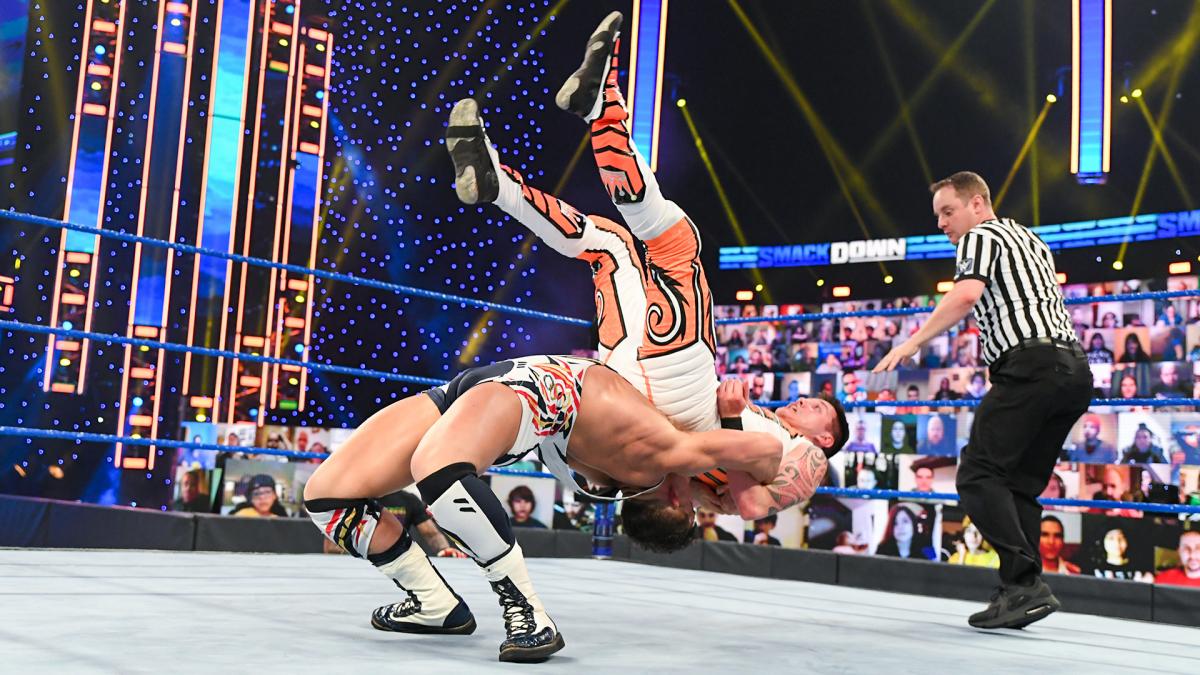 I’ll be honest, I added +.5 to this match’s rating purely for how picture-perfect this tiger suplex was. Photo: WWE

After the match, Rey goes right after Otis, jumping off the apron and delivering a senton to the big man, driving him into the announce table.

Kayla Braxton interviews Seth Rollins, who says that Cesaro is afraid of Rollins’ vision. His interview is interrupted by Murphy, who says that he could assist him in the Cesaro situation. Rollins tells him to get out of his sight.

Reggie is also at ringside. Belair starts off strong, dropping Shayna with a shoulder tackle. When she goes for a dropkick, Shayna catches her and looks for a leg submission, but Belair fights out of it and rolls her up for 2. Shayna targets the left arm of Belair with a kick before delivering a running knee for 2. The Queen of Spades continues to punish the arm of Belair, but when she goes for a Kimura Lock, Belair delivers a slam and a series of spears in the corner before tossing Shayna with a suplex. 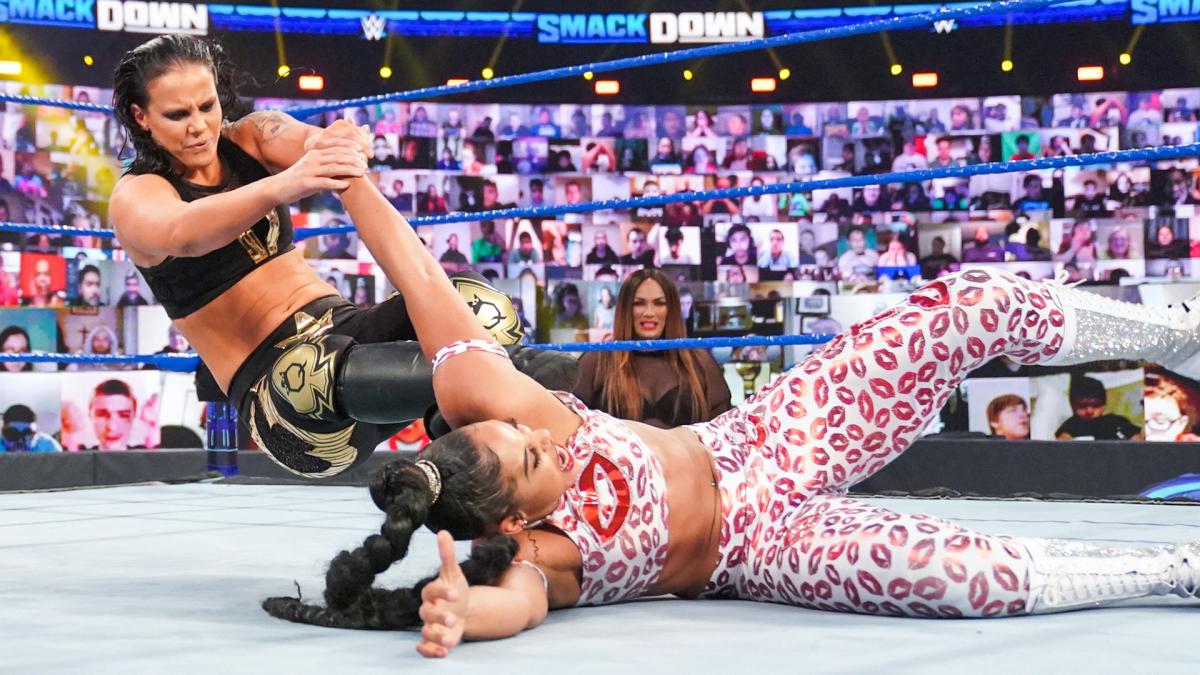 Shayna sends Belair to the outside, where Belair gets in Reggie’s face and shoves him into Nia Jax. Shayna catches Belair with a kick when she gets back in the ring, and Nia goes to clothesline Reggie, but he ducks it, and Nia hits Banks instead. Back in the ring, Shayna locks in the Kirifuda Clutch, but Belair reverses it into the K.O.D to get the win. After the match, Reggie looks to make amends with Banks, but she gives him a vicious slap for his troubles.

Roman chats with Jey backstage, and makes sure he’s prepared. He tells him not to lose, or he’ll embarrass their family.

Seth Rollins is on commentary as Cesaro tosses Murphy around with a gutwrench suplex. Murphy goes for a leapfrog, but Cesaro catches him and delivers a backbreaker for 2. Murphy dumps Cesaro to the outside and delivers a swanton before delivering a top rope meteora for a close 2. Cesaro fights back with an uppercut before delivering a series of running uppercuts in the corner that knock Murphy silly. He gives Murphy a Giant Swing that once again lasts crazily long, before locking him in the Sharpshooter, leaving Murphy no choice but to tap out. 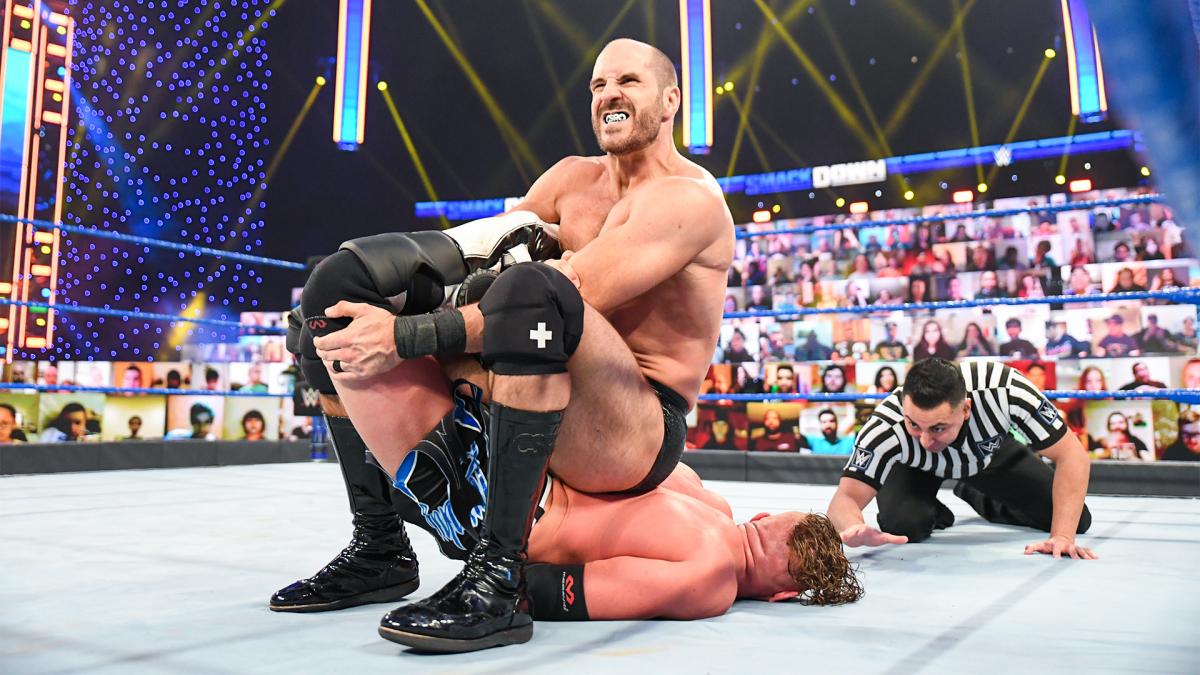 I really hope Cesaro gets a match at WrestleMania. Photo: WWE

Poor Reginald, toting a suitcase, approaches Sasha Banks in her locker room. She slams the door on him, and he walks away dejectedly.

Apollo Crews enters holding a spear, flanked by camo-clothed military bodyguards. He grabs a mic and speaks in a Nigerian accent, which he says is his true voice, as he is now who he truly is. He says that the guards that flank him are the elite guard who have protected his family for generations. He says that he is demanding a title shot against Big E, and when he beats him, he will leave Big E haunted by his complete and total loss to Crews.

Backstage, Kayla Braxton interviews Jey Uso. She doesn’t get a chance to talk to him at all, as Daniel Bryan attacks him from behind.

Bayley hosts a lovely edition of Ding Dong! Hello, where she reads sweet tweets instead of mean tweets like other talk shows do. One of the tweets isn’t quite as sweet as she wanted, so she storms off set.

With Roman Reigns at ringside, the two go at each other immediately, with Jey getting the advantage by sending Bryan into the cage wall and squishing him into it. He drops him but Roman tells him to continue, and Jey slams Bryan into the wall once more. Jey goes to leave, but Bryan stops him. Jey beats him down and goes to climb the cage, but Jey meets him there and slams him into the wall. Jey pulls Bryan’s leg, and the leader of the Yes! Movement crashes to the ground. Bryan fights back by slamming Jey into the turnbuckle and cage wall before driving his feet into Jey with a missile dropkick. Bryan focuses on the left arm of Jey, slamming it into the steel wall.

Bryan goes to climb the cage wall, but Jey gets Bryan in the Tree of Woe and stomps on his injured leg. Jey tries to leave the cage, but Bryan meets him at the top. Jey grabs Bryan and delivers a crushing avalanche Samoan Drop as we go to commercial. When we come back, Jey and Bryan are battling it out on the top of the cage. Bryan slams Jey into the cage wall and kicks him in the chest, but Jey superkicks the injured leg of Bryan, sending him to the mat, before delivering an Uso Splash for a close 2. 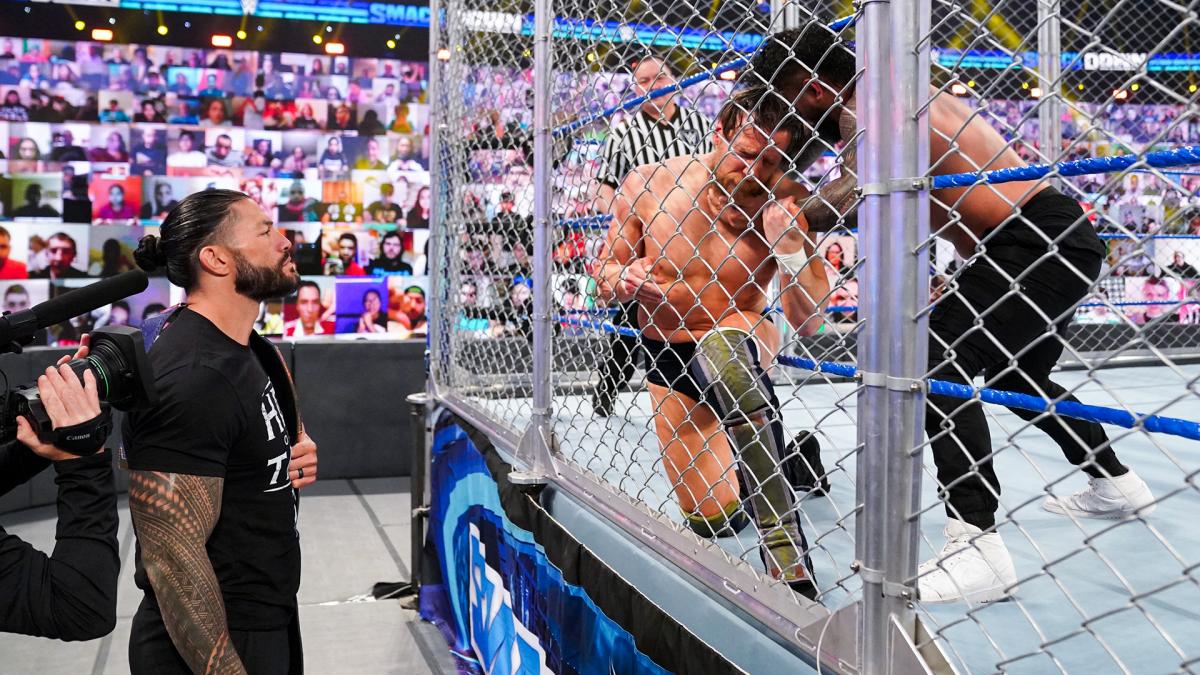 Jey Uso uses the steel cage as a weapon against Daniel Bryan.

Jey tries once more to leave the cage through the door, but Bryan grabs his leg. They exchange kicks, with Jey’s superkick getting the better of the exchange. He pins Bryan for 2 before Bryan rolls him for 2 and delivers a series of elbows to Jey. Bryan looks for the Yes! Lock, but Jey gets out of it and rains fists onto Bryan before slamming him once more into the cage. Jey tries to scale the cage, but Bryan runs up and grabs Jey’s leg.

Bryan climbs to the top of the cage, but Jey grabs him and pulls him back onto the top rope. Bryan delivers an avalanche butterfly suplex and transitions into the Yes! Lock. Jey reaches the ropes before he realizes, unfortunately for him, that there are no rope breaks in a cage match, and Jey is forced to tap out, sending Daniel Bryan to Fastlane to face Roman Reigns for the Universal Championship.

Don’t get me wrong, I’m a huge Daniel Bryan fan. But in my opinion, he shouldn’t have won Elimination Chamber. Because having him get a title shot then, as unfair as that match was, and then getting another right after, turns him more into the golden boy that gets everything, rather than the underdog who has to truly struggle for every opportunity. Edge is playing that role more right now. And I know that Bryan had to get through Elimination Chamber and a steel cage for these title shots, but compared to his fight against the Authority at and leading up to WrestleMania 30, it seems too easy.