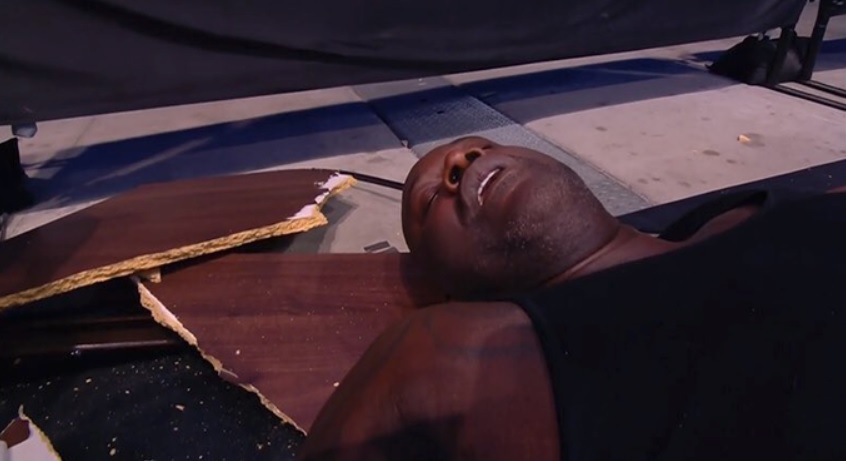 Hey kids, want to see a Hall of Fame basketball player in an AEW ring? Well you’re in luck, because Shaquille O’Neal, yes, Shaq, will be in action. And we won’t even have to wait long to see him, because the mixed tag team match teaming Shaq and Jade Cargill to face Cody Rhodes and Red Velvet is the first bout on tonight’s AEW Dynamite card, which is being called The Crossroads. Let’s get to it.

Cody Rhodes and Red Velvet vs. Jade Cargill and Shaq

Look, no one expects Shaq to put on a five-star catch-as-catch-can classic, but it’s still pretty cool seeing him in a wrestling match on free TV. He and Cargill absolutely cut imposing physical figures, and you know Cody can work with him to produce something fun. Not to be forgotten is that this match marks Cargill’s Dynamite debut as well. She has the cocky heel persona down like she was born to do it, and Red Velvet gets a chance to shine as well, hitting a moonsault to the floor after Shaq beats up some of the ringside midcarders. Are there tables coming into play here? There sure are. Cargill gets the table out, but the big question is who’s going through it. Make that who’s going through them, as Velvet sets up a second table. Shaq hits a huge powerbomb and Cody sort of bodyslams him in return. I’m not mocking him by saying that — Shaq is an immense human being. The problem with that is that he lands hard, which is exactly what happens when Rhodes leaps over the top rope and takes Shaq from the apron to the floor through both tables. Good on you, Shaq. That means it’s up to the women to decide this, and Cargill does exactly that with a facebuster. Pretty darn good for a match featuring a celebrity, if you ask me.

Shaq is loaded into an ambulance, but Tony Schiavone wants to find out how he’s doing. The doors open but Shaq isn’t in there. Maybe he summoned the power of Kazam.

Pac and Rey Fenix vs. John Skyler and D3

Hey, if there’s going to be a squash tonight, you could do a lot worse than having Pac and Fenix do the squashing. It takes only a minute or two for the Death Triangle duo to get their victory.

We now interrupt the proceedings to bring you a press conference by the Inner Circle. The announcers declare that the group has some explaining to do, though that’s really always true for a heel stable. Someone needs to turn up the mic for the person asking questions of Chris Jericho and MJF. Jericho reminds us that it’s been a year since he lost the AEW World Championship, and it’s time for him to hold some gold again. Lest we forget, Le Champion is a seven-time tag champ, with partners like Dwayne Johnson and “AEW’s own Paul Wight.” Heh. Chris and MJF seem to be pretty ornery otherwise, taking offense to questions about Sammy Guevara and Papa Buck. Hey, I recognize the next gentleman asking a question: It’s Eric Bischoff. Needless to say, Jericho is none too pleased about his pointed question about motivating the Young Bucks by hurting their dad, and the Bucks are even more upset about said hurting. Matt and Nick Jackson give an impassioned speech about how Papa Buck’s DIY spirit helped create the Young Bucks, the Elite, and even AEW itself. Matt tells Chris that if there was no AEW, “you’d probably be jerking the curtain at the Performance Center.” One yike. The Jacksons get the Superkick Party started, forcing a plethora of officials to head down to try to break up the melee. The Good Brothers come out to lend a hand as both Jacksons leap and send Santana and Ortiz through tables simultaneously.

A video package promotes the Exploding Barbed Wire Death Match at Revolution with a mix of clips we’ve already seen and commentary from people who know this particular gimmick match well. Can’t wait.

Now this is legitimately a piece of history, as Blanchard is making his first appearance in a match in a major wrestling promotion since 1989. That was so long ago I wasn’t even writing for SLAM Wrestling yet. In other words, eons ago. He’s still got it, especially in terms of psychology, as he fakes like he’s going to do a tope suicida before backing off. Also, J.J. Dillon is out there with FTR, making this feel even more like WCW reunion night. Tully gets the fans going by busting out a vintage slingshot suplex, and his team also gets help from a masked cameraman. FTR floors Luchasaurus with a spike piledriver and Blanchard gets a pinfall in the Year of Our Lord 2021.

The masked man reveals himself to be Shawn Spears, and Arn Anderson points to the group and holds up the Four Horsemen symbol. Not like WWE is doing anything with that gimmick.

Schiavone returns to the stage to officially introduce Wight to AEW. The world’s largest athlete, sporting a “No More BS” shirt, comes out to promote his color commentator gig on AEW Dark: Evolution. He also has a scoop: Wight says he knows AEW is about to sign a “Hall of Fame-worthy” talent but also teases “it’s not who you think.” Interesting. We’ll learn who it is on Sunday during Revolution.

It’s been quite a while since we’ve seen Ryo in an AEW ring stateside, and neither Rose nor the announcers are quite sure what to make of her in-ring antics. I’m all for strong style combined with some personality. The problem is she’s up against an even heavier hitter here, but you know wrestling — Rose’s impressive offense might just be the setup to make her opponent look even better when she survives and prevails. That’s exactly what happens: After an eye-popping suplex and a spear, Mizunami hits the guillotine legdrop off the top rope to receive her trophy from the very woman she’ll challenge for the title on Sunday. They trade forearm shots in the most classic Japanese style there is.

Schiavone returns to the ring, a necessity on any show prior to a PPV. He summons Sting to the ring, and the Icon says it took a Brian Cage powerbomb to make him feel like he was really ready to wrestle again. He’s ready for a street fight, but first he needs to listen to what Ricky Starks has to say. Somewhat surprisingly, Absolute admits he saw fire from Sting last week, and that he’s still got it. Alas, Starks also says Sting is no icon, slapping him to punctuate that hot take. Bad move, Ricky. Sting immediately lays into Starks until he can lock him in the Scorpion Deathlock. The rest of Team Taz tries to turn the tables, but some big hustle by Darby Allin gets him to the ring in time to prevent any serious harm. This will get settled on Sunday.

Scorpio Sky joins the announcers and wastes no time claiming he will be the face of the Revolution. Caster’s entrance rap goes somewhere I wouldn’t, saying “I’ll light you up like Lady Gaga’s dog walker.” Caster figures to be the one who will win here, but the end comes in somewhat surprising fashion, as Jack Evans smacks 10 in the head with Caster’s boombox when the ref is distracted. Caster gets the win, and the whole plot is revealed as Matt Hardy has an envelope of money for him. His beef with the Dark Order is deep.

Miro has a message for Chuck Taylor, and it is delivered in more than one language but comes to the same conclusion: Game over.

This is kind of like two intertwined feuds in one, though fan reaction to the Page-Hardy part of it appears to be mixed, at best. Never fear, this feels like a temporary subplot until Page makes a legit run at the AEW title. And honestly, Hardy as a mouthpiece/mastermind for Private Party is fine business. A spot in a main event like this really shows how far Silver has come as well. There is some payoff after it takes quite some time for Page to get his hands on Hardy, but will they figure in the finish together? Not quite, as Silver and Page work well as a team to finish off Quen.

Hardy wastes not even a second before attacking Page with a microphone, but the full might of the Dark Order soon rushes to the rescue. Then a ton of other wrestlers spill from the back into the ring, leaving -1 beside himself on the stage. Now that is a show-ending brawl if there ever was one. Don’t forget Revolution is this Sunday, and we’ll see you in seven!

Sure, I’m grading this on a curve as a pre-PPV show, but since the Shaq match was more fun than it had any right to be, some of the other matches were good, and there was just generally a lot going on, this was a fast and enjoyable two hours. Revolution is stacked but could be quite long, so we’ll see if that ends up working for or against it.