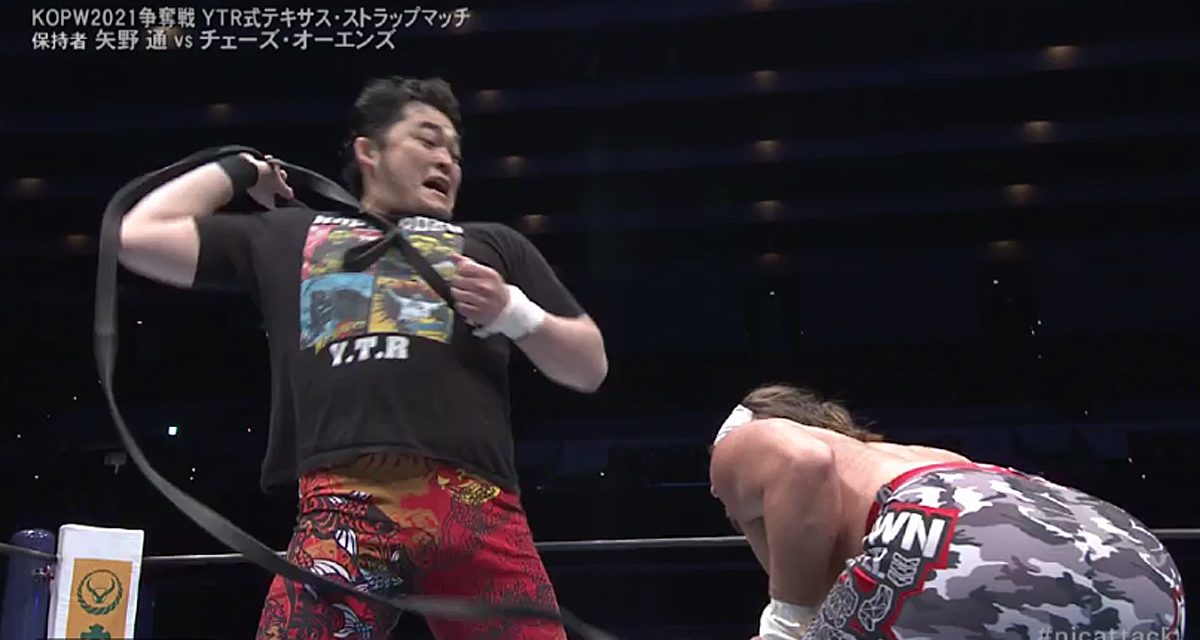 Although there was no castle and no attack, night one of NJPW’s latest event was full of grudge matches. The nastiest one of all though was Toru Yano defending the provisional KOPW 2021 Championship against challenger Chase Owens in a strap match.

Owens or Yano could only be declared the winner of this Texas Strap Match though by being the one to remove the last of the four corner pads. The official doesn’t take any chances with the strap. He not only buckles it to both Yano and Owens’ wrists but he tapes it there as well. Commentator Gino Gambino explains that he has been in one strap match before and that was against NXT’s Bronson Reed.

“He went on to become famous and I am stuck here with you guys,” grumbles Gambino to Kevin Kelly and Chris Charlton. 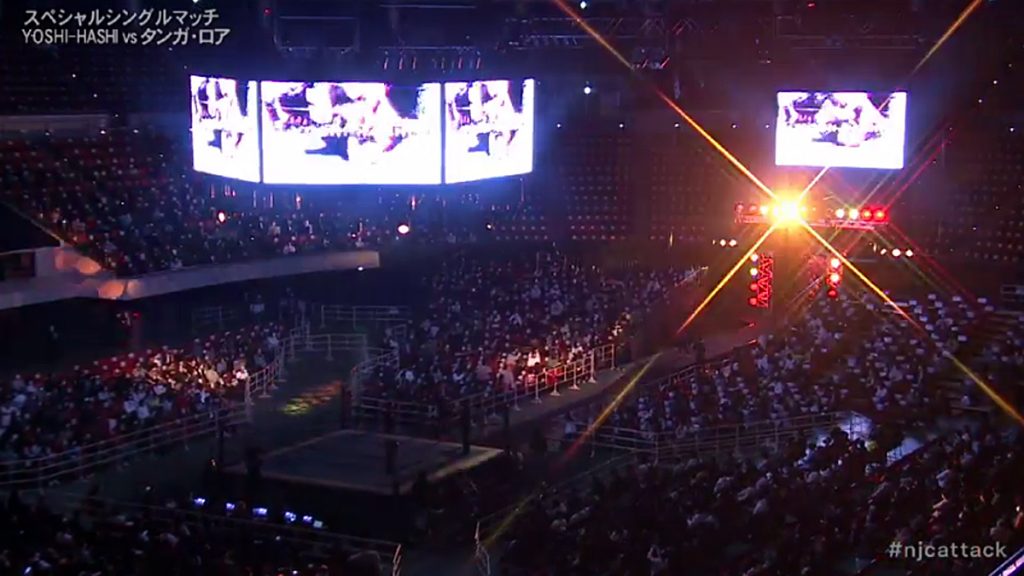 Yano strikes first at the bell lashing Owens across the shoulder and his back. Owens flees to the floor. Owens asks for a time out and extends his hand to Yano in friendship. Yano responds with a kick in the stomach and more lashes with the strap. Owens ducks out of the ring after being choked with the strap giving Yano time to remove one of the turnbuckles. Owens loops the strap around a steel post pulling Yano into it.

Owens takes down one of the turnbuckles. He throws it at Yano and drop kicks him hard into an exposed corner. 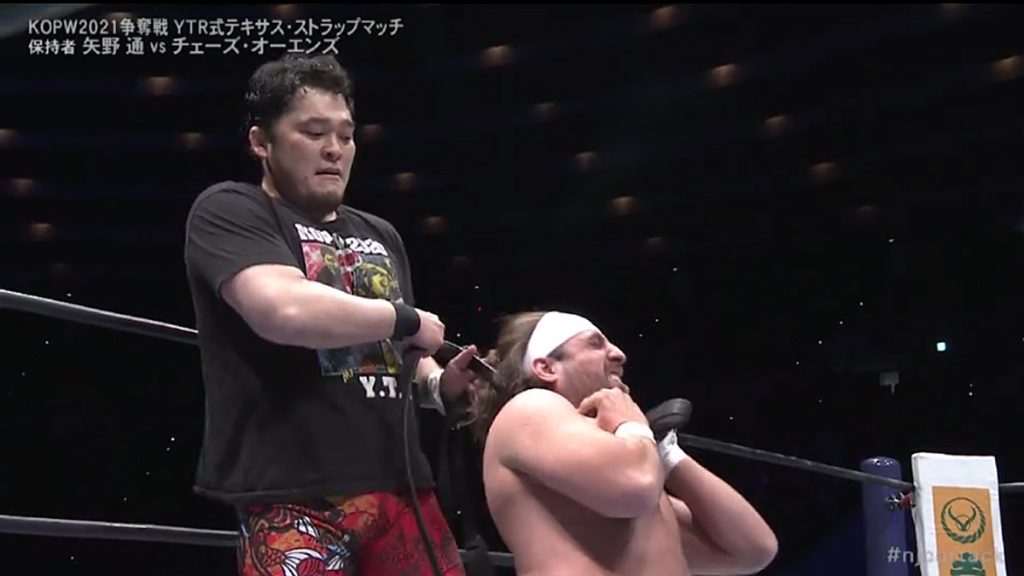 Yano chokes the life out of Owens. Courtesy: NJPW.

Yano pulls out a roll of tape from under the ring. Owens ducks through a ringside barricade and the two men begin a tug of war. Owens wins pulling Yano into the barrier twice. Owens tapes Yano’s hands shut to prevent him from removing the turnbuckle pads. While Yano fumbles around Owens unties the third corner pad leaving just one left.

Yano punches Owens in the “lower abdomen” but he cannot undo the final buckle because his hands have been taped up. Being resourceful, Yano uses the buckle of the strap to cut away the tape on his hands. It takes him some time though. Yano doesn’t get the chance to work on the turnbuckle as Owens drills him with the Jewel Heist. Owens exits to the floor and pulls Yano into an exposed buckle and then throws him into the ringside barrier. Owens shows he has some evil intensions in mind when he rips up the mats on the floor exposing the concrete floor. Yano backdrops his way out of a package piledriver sending Owens hurtling to the concrete. Yano’s plan to release the last turnbuckle pad fails though as there isn’t enough slack to reach it with Owens laying on the floor. Yano jumps back out only to be smashed in the head with the ring bell.

Owens runs to the last buckle. He doesn’t make it because Yano is KO’d on the floor and is dead weight. Owens drags Yano back into the ring blasting him with a running knee strike to the head. Owens can only get the turnbuckle half undone as Yano pulls him back to the centre of the ring. A powerbomb from Yano paves the way for him to release the last buckle and win the match retaining his provisional KOPW 2021 Championship.

Khan splatters Tanahashi with The Eliminator. Cobb drops Kojima with Tour of the Islands. Cobb and Khan hold Tenzan so that Ospreay can hit the OsCutter off the ropes. The heels stand triumphant over the defeated faces.

Winners: The United Empire (Will Ospreay, Great-O-Khan and Jeff Cobb) 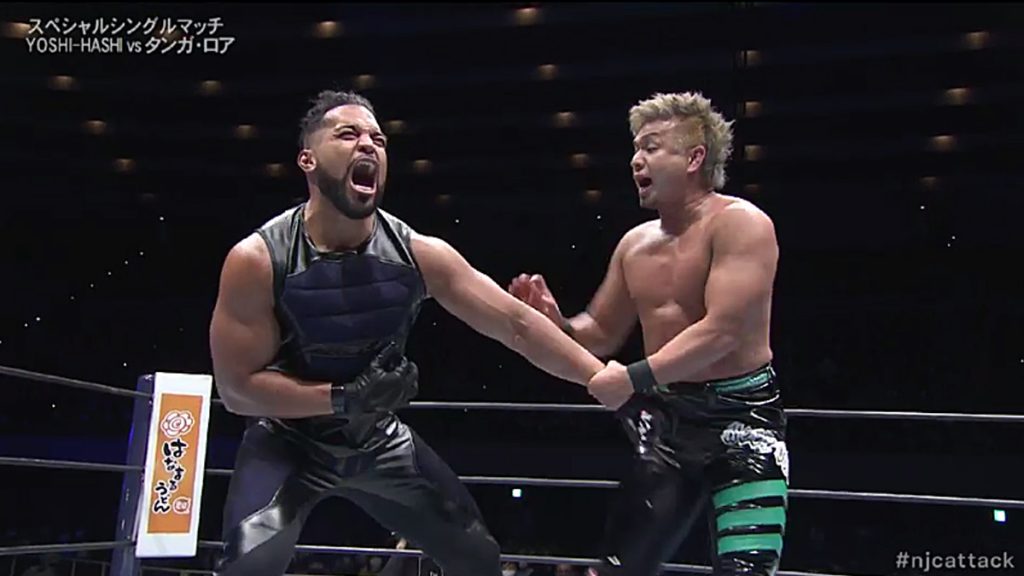 Jado is by Loa’s side. We don’t get to see Loa in singles action very often. This is Loa’s third solo match in NJPW. Jado gets involved tripping up Hashi early on. As powerhouse Loa beats Hashi down, Jado tells Hashi the end is near. He should just quit.

“You came to fight me! Fight me!” yells Loa at a fallen Hashi demanding he get to his feet.

Loa brings Hashi crashing down to the canvass with a spinebuster for a two count. “I love your fighting spirit but now it is over,” says Loa picking Hashi up off the canvass. It takes six super kicks from Hashi to stun Loa. Loa kicks out of Hashi’s senton from the top rope. Loa hooks the official so that Jado can enter the ring with his kendo stick. Hashi ducks Loa’s haymaker. Loa clocks Jado knocking him out. Tama Tonga makes an appearance at ringside. Hashi is distracted long enough for Loa to scoop him up for Ape S–t. Just as Tonga and Loa prepare Hashi for a Magic Killer, Hirooki Goto runs down to save him. Goto clotheslines Loa over the top rope. The official rings the bell to start Goto and Tonga’s match as it is up next.

Tonga takes the match to the floor ramming Goto into the steel post. Jado crack’s Goto over the back with his kendo stick. Jado distracts the official as Loa slips into the ring. A head butt from Goto knocks Loa senseless. A haymaker takes care of Jado. Goto powers out of Gun Stun to pin Tonga with a GTR.

White complains to the official that his knee is injured. Gedo take his cue to attack Ishii from behind. Gedo retreats though as Ishii hurls White into the ring barricade twice. White fires back by lifting Ishii up and dropping him ribs-first on the ringside barrier. White does more damage bouncing Ishii off the barriers and the ring itself. Ishii takes a bad hit as White suplexes him into a ringside barrier. Ishii clutches his ribs and takes a long time getting to his feet.  Ishii head butts White off the top rope. White dangles there upside down until Ishii Superplexes him off the second rope.

White signals for the Blade Runner finisher, however, Ishii counters with a German Suplex. Gedo enters the ring wielding brass knuckles as Ishii prepares to put White away with the Sliding Lariat. Ishii throws White into Gedo. The Sliding Lariat hits its target but White kicks out. Following a great back and forth, White pins Ishii with a Blade Runner.

Evil staggers Okada with a solo Conchairto. Togo lays the boots to Okada on the floor. Even though he didn’t see the attack, Red Shoes refuses to count Evil’s attempted pinfall due to Togo’s possible shenanigans. Togo whacks Okada across the back with a steel chair. Okada ends any further interference though with a boot to the face. Evil thwarts submitting to the Money Clip by pushing Okada into Red Shoes knocking the official into a corner. Okada goes for the Money Clip again even though Red Shoes is out of it. Togo slips his garotte around Okada’s throat from behind. Okada breaks Togo’s grip by backing him into an exposed turnbuckle. Okada Tombstone Piledrives Togo into next week. Okada picks up Togo’s garotte and briefly considers using it before throwing it out of the ring. Okada pins Evil with a Rainmaker Clothesline.