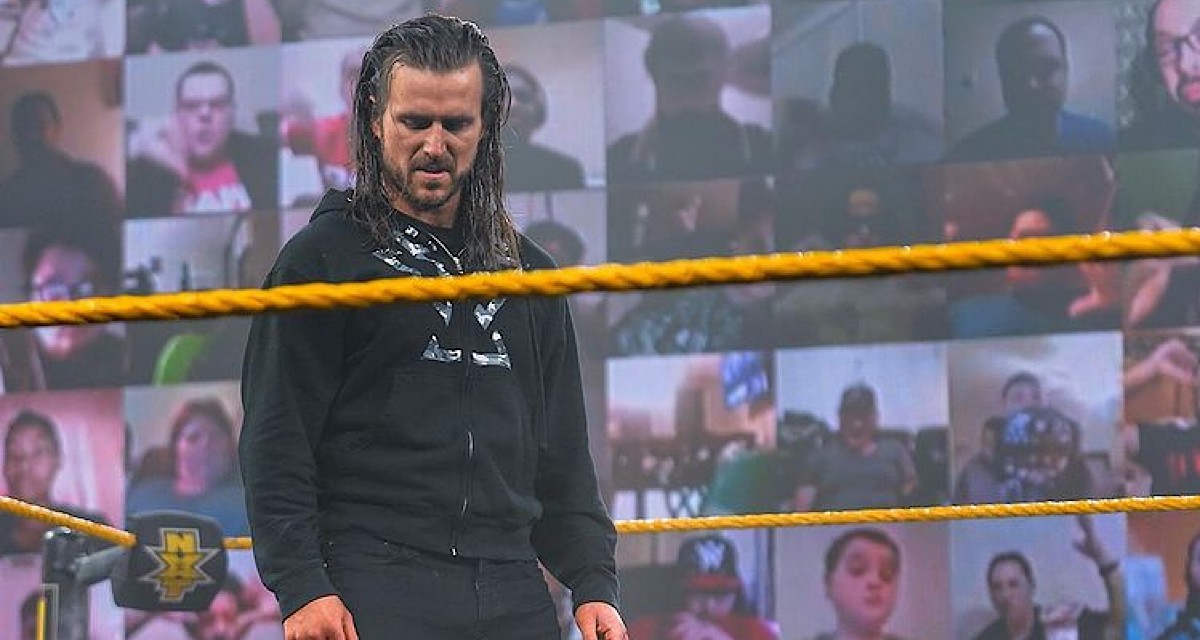 For yellow brand fanatics in Canada, tonight’s episode marked the beginning of Sportsnet’s live weekly broadcasting of NXT, a move that’ll certainly benefit the promotion’s northern audience. For others, NXT tonight was business as usual — a generally mid undercard followed by a show-stealing closing match and segment.

Tonight’s main event pitted Cruiserweight Champion Santos Escobar against rival Karrion Kross in a refreshingly haywire No Disqualifications match. And, after his viral attack on stablemate Kyle O’Reilly, Adam Cole spoke out. Although there’s clearly much more brewing beneath the surface.

The Way’s Austin Theory is still discombobulated after being kidnapped by Lumis. He’s acting goofier than usual, jovially telling Gargano, “He’s right behind you!” before Lumis attacks and controls the matchup. Ringside, the group distracts Lumis allowing Gargano to capitalize with a dive preceding picture-in-picture. The comeback eventually transpires, but Gargano delivers a superkick and thereafter directs traffic. With the referee distracted, Theory bungles his opportunity to chairshot Lumis and inadvertently costs Gargano the match; Lumis ultimately chokes him out.

A vignette showcasing MSK’s underdog backstory beefs up their Dusty Rhodes Tag Team Classic tournament victory. NXT hasn’t capitalized on their “rascal” side yet, instead simply portraying them as lifelong fans. They’re scheduled for an interview before Grizzled Young Veterans blindside them backstage.

Footage from earlier today shows Malcolm Bivens goading Leon Ruff into a match against Tyler Rust. Later, Bivens cuts an in-ring promo on Ruff which mainly gets this point across: “(Ruff is) the son that I didn’t have and never wanted.” Ruff makes his entrance but gets pummeled by Isaiah “Swerve” Scott after defeating him last week. Scott demands opportunities, and he’s gonna take ‘em, while Bivens happily declares Rust a victor tonight.

Cameron Grimes is watching Ted DiBiase’s unforgettable $500 basketball dribbling segment on his tablet and decides to raise the stakes. For $1000, a backstage worker must dribble a basketball ten times, but Grimes forgets to kick it! He’s left befuddled, angered, and most importantly, sans $1000. He should’ve watched the entire video.

Commentary announces that Kyle O’Reilly will be sidelined for six-to-eight weeks, thanks to Adam Cole’s attack on last week’s episode.

After the tech mishap earlier, one’s gotta wonder if NXT is actually “Live” as advertised. Otherwise, Stark has stood ringside for many minutes waiting for Shirai. The latter controls the opening half, but Stark levels with the champion delivering a German. Shirai makes a comeback and hits a top-rope Hurricanrana which Stark apparently shakes off, delivering two more Germans. But the champion counters with double knees and her finishing Moonsault for three. The competitors embrace afterwards before Toni Storm interrupts, provoking Shirai into a one-on-one championship match.

Johnny Gargano berates his stablemate Austin Theory for siding with his kidnapper Dexter Lumis. Even Indi Hartwell joins in, admitting that she thinks Lumis is “kinda hot.” Gargano disappointingly scolds his children and forces Theory into therapy.

Cameron Grimes watched the whole video now. For another $1000, he approaches a lady, giving the ten-dribble instructions. Except this woman catches his drift, is evidently a baller, and outsmarts Grimes. Again irate, Grimes says that “this ain’t over” between him and Ted DiBiase.

Catanzaro and Kayden Carter standing ringside want their friend back, but Li hasn’t budged. Catanzaro’s strikes are ridiculously bad, and the constant flips aren’t helping her either. Li quickly ends things, ramming Catanzaro into the barricade and steps which results in referee stoppage. This rivalry continues dragging on as Tian Sha’s motives are still unclear.

History repeats itself, three times tonight actually. Cameron Grimes lays down the challenge more desperately than ever and punches the dribbler before even starting. Grimes estactically says, “Ted DiBiase, you can kiss my grits!” Grimes just doesn’t get old; he’s absolutely gold.

Speaking of getting old, Maverick and Dain are still uncooperative, and GYV continues cutting promos during their entrance; Zack Gibson announces that MSK’s Wes Lee broke his hand during tonight’s attack. Immediately though, “Shrek and Donkey” gain control over GYV as Maverick gets tossed onto the mass before commercial. Both Dain and Maverick receive hot tags respectively, but James Drake dives onto the bigger man. GYV inevitably hits Ticket to Mayhem on Maverick for three.

After being searched for by General Manager William Regal the entire night, Cruiserweight Champion Santos Escobar finally pulls into the parking lot. His SUV is guarded by Legado del Fantasma.

Dain carries Maverick into the trainer’s room before getting interrupted by former Sanity brethren Alexander Wolfe. “You used to be a monster,” says Wolfe.

Legado del Fantasma’s security proves no bueno when Kross takes out both members. The brawl begins outside, and Kross throws the cruiserweight into a semi. Escobar tries locking himself in, and LDF’s distraction gives them a three-on-one advantage into the building. The chaotic Kross vaults the duo through the plexi-glass, but Escobar introduces a steel chair before picture-in-picture. Kross continuously fends off Joaquin Wilde and Raul Mendoza which allows Escobar to capitalize every time, but he eventually makes the comeback. Kross destroys LDF and viciously suplexes Escobar through the announce table, thereafter connecting with his finishing forearm. Kross fought against an sanctioned three-on-one and looked monstrous throughout.

“Lemme talk to ya.” LA Knight won’t announce his official NXT debut; he does things on his own time.

Adam Cole makes his entrance to unanimous jeers. Footage of Kyle O’Reilly’s attack plays, and Cole admittedly isn’t proud of himself. He even hates himself for his “stupid, stupid mistake.” But before Cole can finish apologizing, stablemate Roderick Strong interrupts and criticizes his friend for destroying the group’s trust. NXT Champion Finn Balor charges after Cole but cannot overcome the two-on-one. The Undisputed ERA leader breaks down and embraces with Strong before delivering a low blow! Cole ultimately betrays the group once again to conclude tonight’s episode.

If rough and edgy matches like Escobar versus Kross happened more often, NXT’s whole aesthetic and quality would greatly improve; coming away from this match, Kross looked more violent than ever. Regarding the closing segment, it’s simply too soon to judge, personally. NXT is clearly going the deep, emotional route, and that’s alright. What the endgame for Undisputed ERA is will be interesting.