AEW Dynamite: Archer, Fenix tear it down for a shot at a title shot 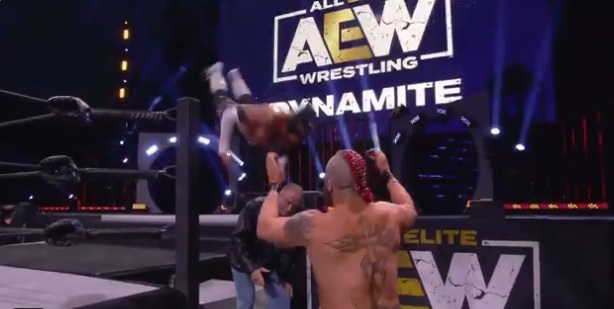 You say you want a Revolution? Well, you know. We all want it to be March 7. It’s not yet, though, so we’ve got business to attend to in tonight’s episode of Dynamite. Also, you may have heard that AEW made a Big (Show) signing this week, and while we won’t see Paul Wight at Daily’s Place this evening, we will soon. Let’s flip that dial to TNT and see what awaits.

You have to admire the spunk of Mr. Nemeth, almost like he doesn’t know he’s about to get squashed here. The end does indeed come quickly for the Hollywood Hunk, by way of the Paradigm Shift.

Naturally, Mox isn’t here just to win a two-minute match, so he makes himself at home in a chair to tell us what we already know: that he will do whatever it takes to get back to the top of AEW. Alas, that’s exactly what he’s going to have to do in an Exploding Barbed Wire Deathmatch. Despite the gruesome images this match type calls to mind (as well as vintage Japanese wrestling magazines) and the fact that this is likely a trap of some sort devised by Kenny Omega, Moxley says he’s addicted to the sick thrill it brings with it. Win, lose or draw, Mox says everyone will know he gave it all he had.

Last week, Lance Archer and Rey Fenix were interviewed together about the match that will take place later tonight. Inception! Or maybe Tenet. Archer seems irritated that he can’t understand what Fenix is saying in Spanish, then gets even more upset when he’s told what it is.

Apparently we’re just calling Matt and Nick Jackson’s parents Mama and Papa Buck now. I’m not a regular watcher of Being the Elite so maybe that’s a thing from there.

The Varsity Blonds vs. Ricky Starks and Brian Cage (w/ Taz and Hook)

Two straight squashes to start the night? That’s probably selling the Blonds a bit short, and even Taz does a little work putting them over. Sure enough, they have a small sequence of success, but Cage eventually puts an end to the proceedings with the Drill Claw.

Up on the big screen, a video shows a smiling Darby Allin being delivered to an undisclosed location by body bag. Sting drags a bag out to the stage, but it’s not Allin in there: It’s Hook. Allin makes an even more dramatic entrance, ziplining to the ring from the upper reaches of the arena, and he promptly joins Sting in beating the snot out of Team Taz. Sting lays out Cage with a Scorpion Death Drop, a sight I’ve not seen in many a year.

Tony Schiavone catches up with newlyweds Kip Sabian and Penelope Ford, along with Fan Controlled Football team owner Miro (seriously, look it up). The objects of the heels’ anger, Chuck Taylor and Orange Cassidy, issue a Revolution challenge to Miro and Sabian by way of passing a note like they were in an eighth-grade study hall.

Look, eventually there’s going to be a bout on this card where it’s not obvious who’s going to win when the wrestlers are announced, but this ain’t it chief. Cutler has a cool dragon mask as part of his entrance gear and pulls off a few nice aerial moves, but that’s about it.

The Inner Circle comes out to administer more pain to Hager, but the Young Bucks rush to the ring and start handing out invites to a Superkick Party. Hager declines his, so the Jacksons challenge Chris Jericho and MJF to meet them now instead of waiting until Revolution. Unfortunately, Jericho and MJF are backstage, beating up poor Papa Buck. “Come back here and pick up your trash,” taunts Jericho as Matt and Nick rush to check on their dad. Matt gives chase into the parking lot but arrives as the heels are escaping by car.

After the commercial break, Papa Buck is loaded into an ambulance, with Nick Jackson and Doc Gallows riding with him.

See, I told you there would be a more competitive match at some point. There’s going to be some shenanigans here as well, with a vengeful Hardy assisting from the outside until Alex Reynolds and John Silver rat him out to the ref. Snitches get stitches, Dark Order. The announcers play up the idea that Kassidy isn’t just a tag team wrestler, but we’ve seen him have good solo matches before (against Jericho, for one). He’s also doing a nice job working over Hangman’s arm, but page catches him in midair and slams him down with an over-the-shoulder piledriver to get the pinfall.

Enraged, Hardy promises Page he made a mistake siding with the Dark Order instead of Big Money Matt. He claims he will hurt every member of the group and sends 5 flying head over heels off the stage and through a table. Reynolds and Silver take off in pursuit.

Alex Marvez goes on assignment to check in with Omega and Don Callis, who are busy working on something they’ve named the Moxley Extermination Chamber. Pound that metal into shape, Kenny.

After a few tastes of Rose’s strength, Baker throws a bit of a temper tantrum and looks like she might get counted out. Not so fast, my friend, as Lee Corso might say. It’s just some mind games by the good doctor. Baker also has Rebel on her side, but maybe all she’ll need to win is the Lockjaw. Or maybe not. The damage done to Rose initially prevents her from pulling off the Beast Bomb, but she manages to pull it together after dodging a thrust kick and it’s enough for her to win and advance. Have to say Baker looked good in defeat here too.

FTR and Jurassic Express discuss their ongoing issues, reminding all of us that Tully Blanchard is about to participate in a wrestling match in 2021. Holy crap, it’s been even longer than I imagined: Tully hasn’t stepped in the ring for a national promotion since 1989. I’m feeling old, kids.

There’s a spot in the Face of the Revolution Ladder Match at stake here, despite Archer’s assertion that he should not have had to qualify. Fenix always finds a way to take your breath away, and tonight he does it by flipping off the ramp over the back of Roberts to smash into Archer. Amazing. He has less success trading chops with the Murderhawk Monster in the center of the ring. But both men have some more moments without winning the day, and Archer looks like he’s talking to himself, wondering what it will take to win. We’re starting to get close to the “TV time remaining” part of Dynamite main events coming into play. Just as the announcers start wondering what happens if there’s a draw, Archer pulls off the Blackout, bringing an entertaining final contest to a close.

So Archer now gets to compete against five other men just to get a chance to take on Allin for the TNT Championship, which is something you could otherwise just … be granted. Anyway, that was a very good way to end the night, so let’s not be too cynical. See you in seven!

The first hour dragged, but Isiah Kassidy and Adam Page pepped up the proceedings, and the main event was worth the wait. It would have been edge of your seat stuff if Rey Fenix had made the ladder match, but one expects he’ll keep getting his time in the limelight.