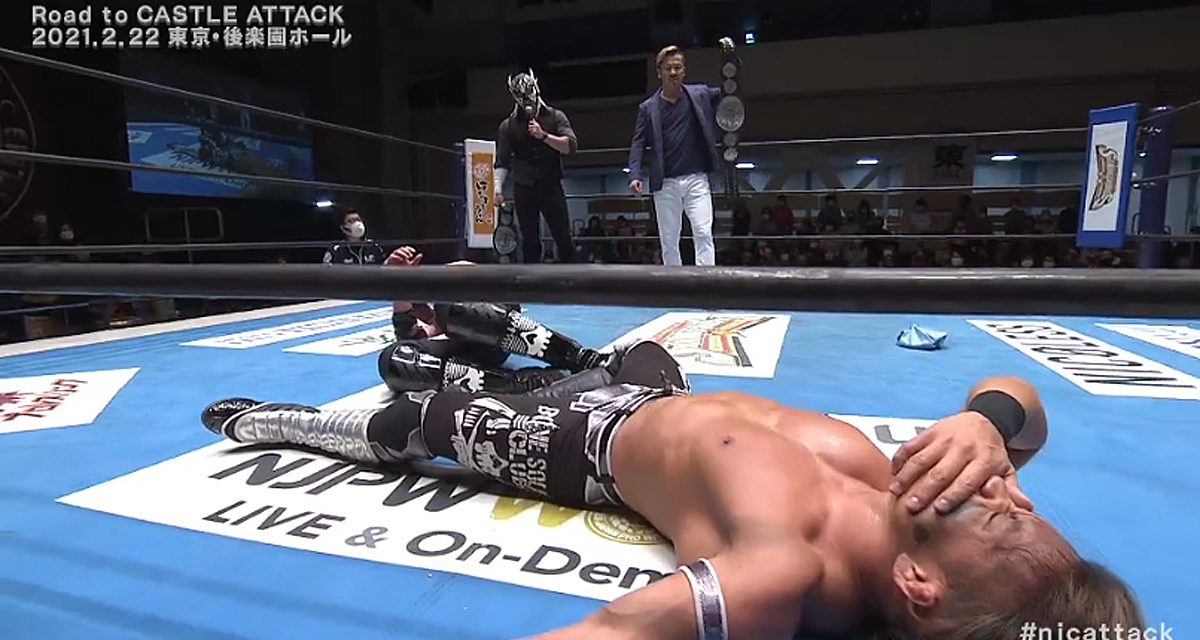 Although we don’t know the status of the IWGP Junior Heavyweight Championship at the present time, NJPW has moved quickly to address Hiromu Takahashi’s injury which will keep him out of action for at least six months.

Bushi and Takahashi were supposed to challenge Bullet Club’s El Phantasmo and Taiji Ishimori on Thursday for the IWGP Junior Heavyweight Tag Team Championships. The Suzuki-gun team of El Desperado and Yoshinobu Kanemaru, who have held the titles twice before, have stepped up to take their place.

Coming to the ring to take on Bushi and Shingo Takagi in a non-title match on night five of the Road to Castle Attack tour El Phantasmo is sad that Hiromu isn’t around. He cannot bring himself to do his usual entrance or Too Sweet with Ishimori but once the bell rings, his mood lightens up and Bullet Club attacks LIJ.

At the conclusion of the match, Phantasmo knocks out both Bushi and Shingo with Sudden Death. Ishimori pins Bushi.

Phantasmo though is still looking for his good pal Hiromu.

“Hiromu, where are you?” has asks on the house mike as he leans over and asks an unconscious Bushi.

“Oh, that’s right. He is in the hospital getting surgery,” laughs Phantasmo. Since he and Ishimori don’t have to defend their IWGP Junior Heavyweight Tag Team Championships on Thursday’s show, they are going to take the night off and party, says Phantasmo.

Cue Suzuki-gun’s El Desperado and Yoshinobu Kanemaru who enter the ring in street clothes. Desperado lays out Ishimori with a loaded punch. Desperado and Kanemaru close in on Phantasmo as he backs away.

“We can work something out,” says Phantasmo begging off. 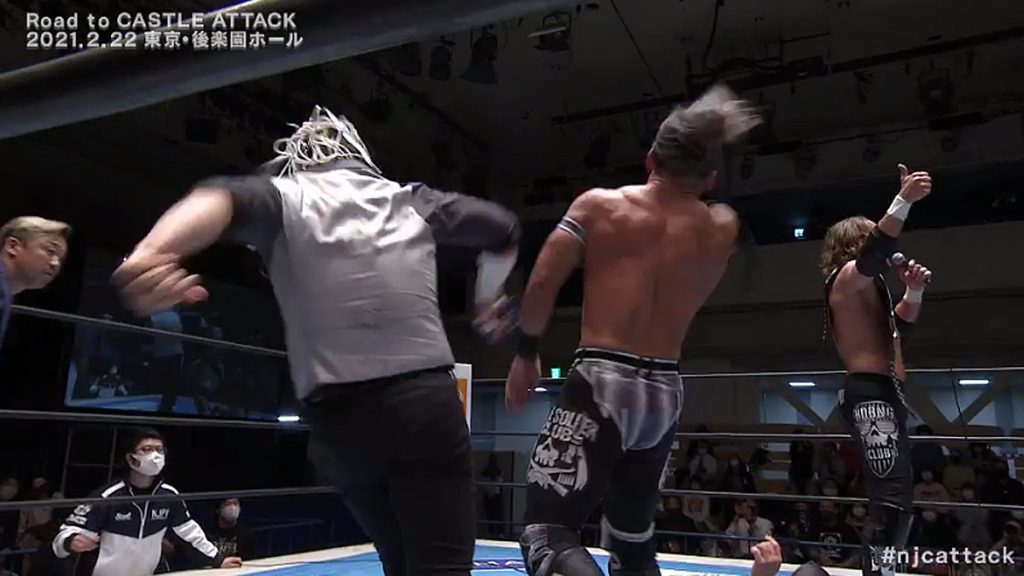 Phantasmo tries to take out Desperado with Sudden Death. Desperado catches his leg and Kanemaru kicks him in the crotch. Kanemaru drops Phantasmo with his brainbuster.

Desperado and Kanemaru issue a challenge to Ishimori and Phantasmo for the championships, stomp them and then leave the ring setting up Thursday’s bout between the two teams.

The faces rush the ring and a brawl breaks out. Ospreay falls for the same spot again and gets crotched on the top rope, again. Tenzan instinctively goes for his Mongolian Chops against Ospreay and Cobb but stops himself at the last possible moment. Tenzan and Kidd pull off an impressive double suplex on Cobb. Ospreay has to make the save for his team. Cobb pins Kidd with a Tour of the Islands. Khan tries to tear The Ace’s knee socket out on the floor as Cobb and Ospreay double team Tenzan. 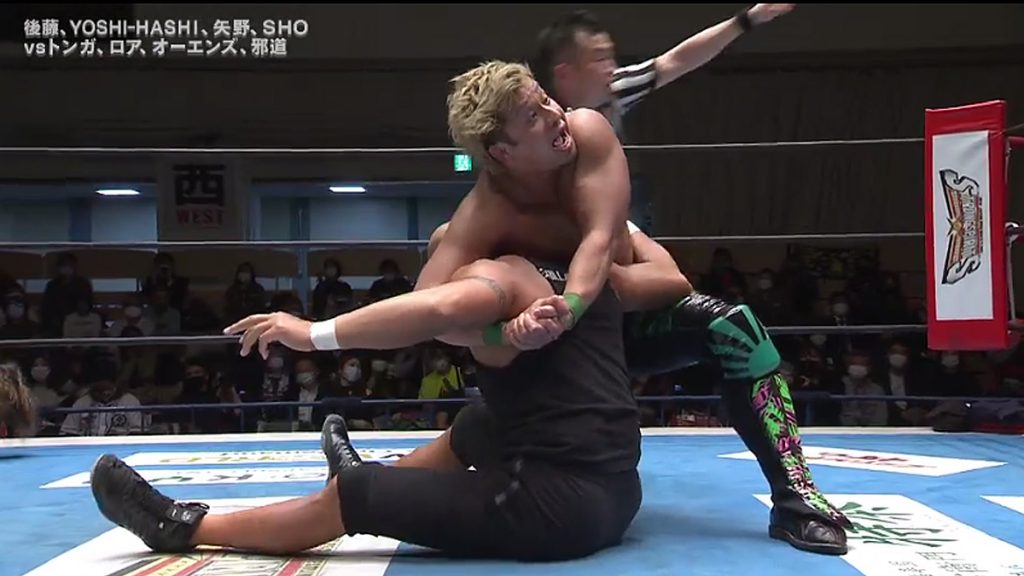 Yoshi-Hashi has the Butterfly Lock cinched in. Courtesy: NJPW.

Owens carries that strap to the ring with him. When the official isn’t looking he uses it to whip both Sho and Yano. Yano and Owens get into a stalemate in the middle of the ring. Yano won’t drop the turnbuckle pad he ripped off and Owens won’t drop the strap. The official counts to three. Yano discards the turnbuckle pad but Owens holds onto his strap taking a couple of swings at Yano. The official rips the strap out of Owens’ hands. While the rest of Chaos holds off Bullet Club, Yano makes Jado submit to the Butterfly Lock. Owens throws the turnbuckle Yano tore off back into the ring. It hits Yano’s KOPW trophy and breaks it. Yano is sad. 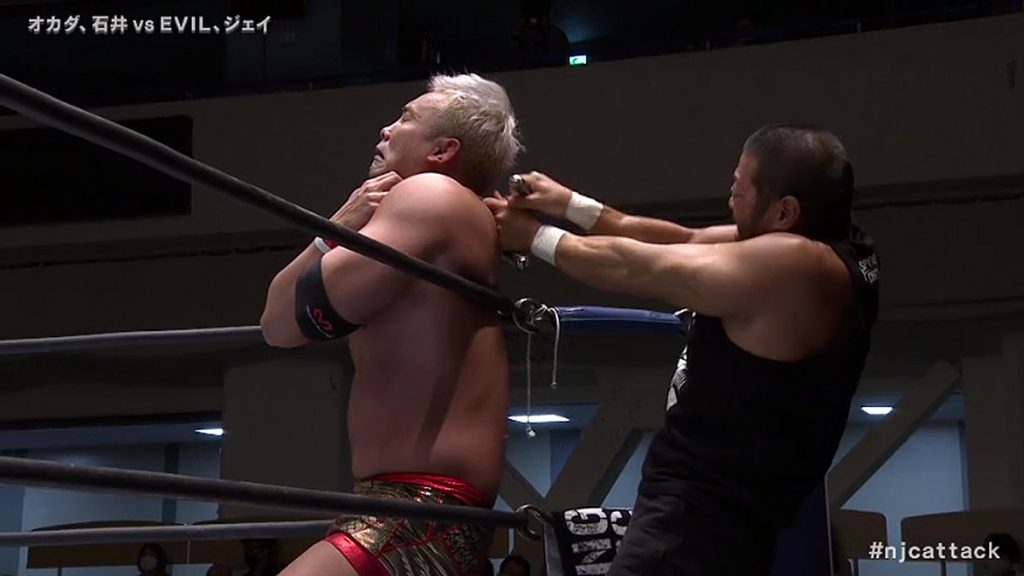 Togo chokes out Okada with his garotte. Evil pins Okada with Everything is Evil. White and Gedo choke out Ishii again.