Evil wins out and an injury at Road to Castle Attack 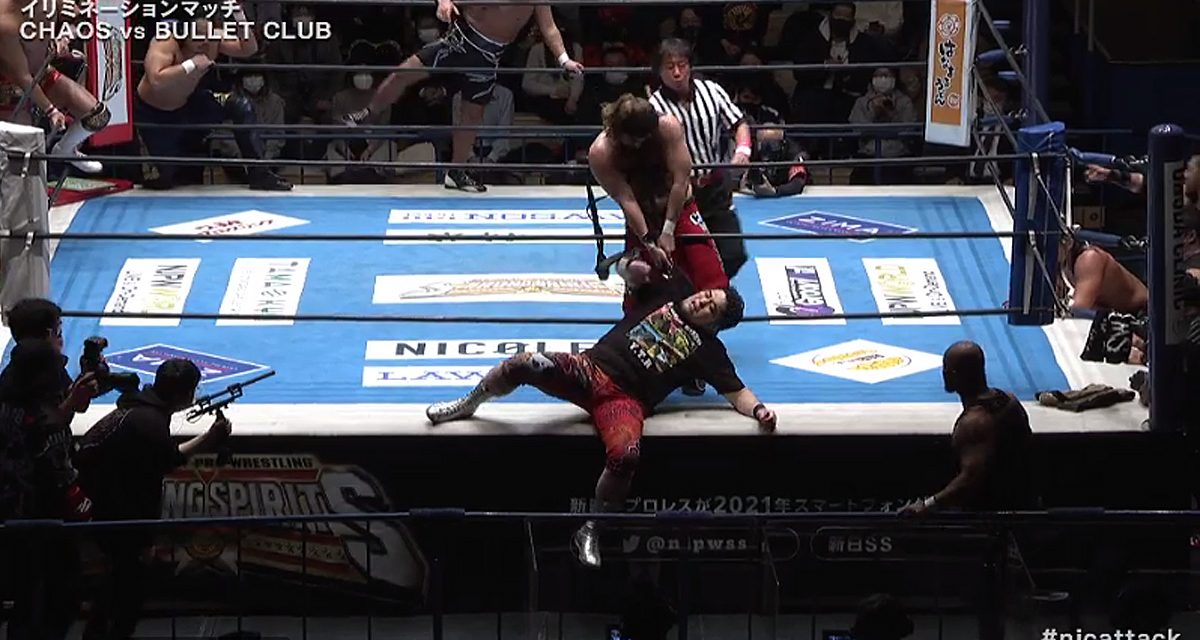 The Road to Castle Attack tour didn’t get off to a good start on Valentine’s Day as it looked like new Young Lion Yuto Nakashima was injured in his debut match.

Just seconds into his bout with Yuya Uemura, Nakashima was hurt as he and Uemura grappled awkwardly and roughly on the mat. Nakashima continued to hold his left arm and shoulder while he conferred with the official who called the match immediately. Trainers and medical officials came to Nakashima’s aid as he cried out in pain. Uemura stood nearby looking very concerned about his fellow Young Lion. When Nakashima finally got back to his feet he shoved Uemura and they exchanged some words in Japanese. The crowd clapped for both men as they made their way to the back separately. 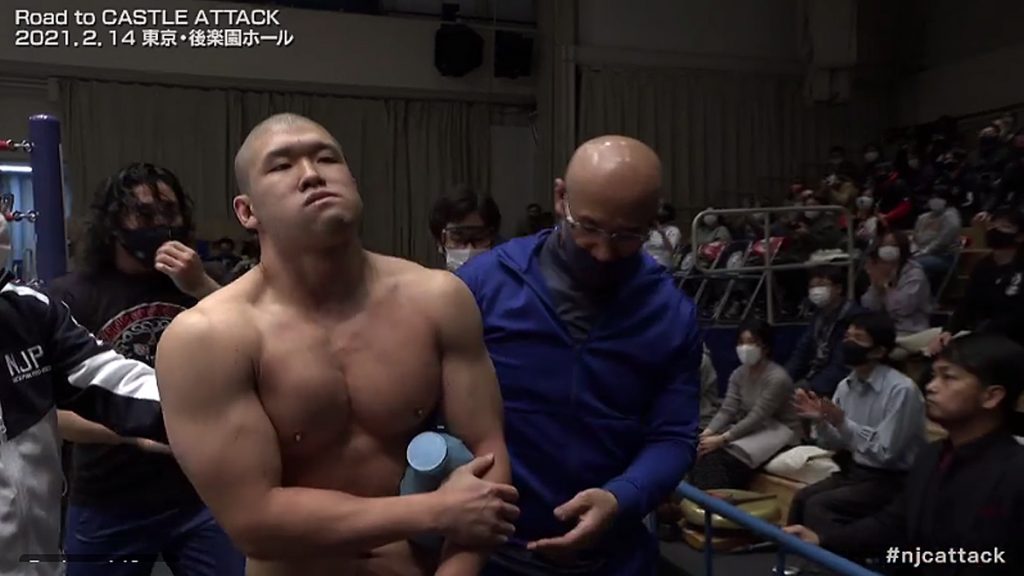 In the main event of the evening it was an elimination tag team match pitting Bullet Club against Chaos. On the Chaos side it was Toru Yano, Yoshi-Hashi, Hirooki Goto, Tomohiro Ishii and Kazuchika Okada. For Bullet Club it was Chase Owens, Jay White, Evil, Tanga Loa and Tama Tonga.

As soon as Chaos hit the ring the match turned into a huge brawl with everyone pairing off. Chase Owens revealed his stipualtion for his upcoming KOPW 2021 championship match against Yano by pulling out a strap and binding himself and Yano together. Owens and Yano whipped and punched each other with the strap. Owens wrapped the strap around Yano’s neck and threw him over the top rope eliminating him at 2:36. Yano responded by yanking on the strap pulling Owens over the ropes and out at 2:40. 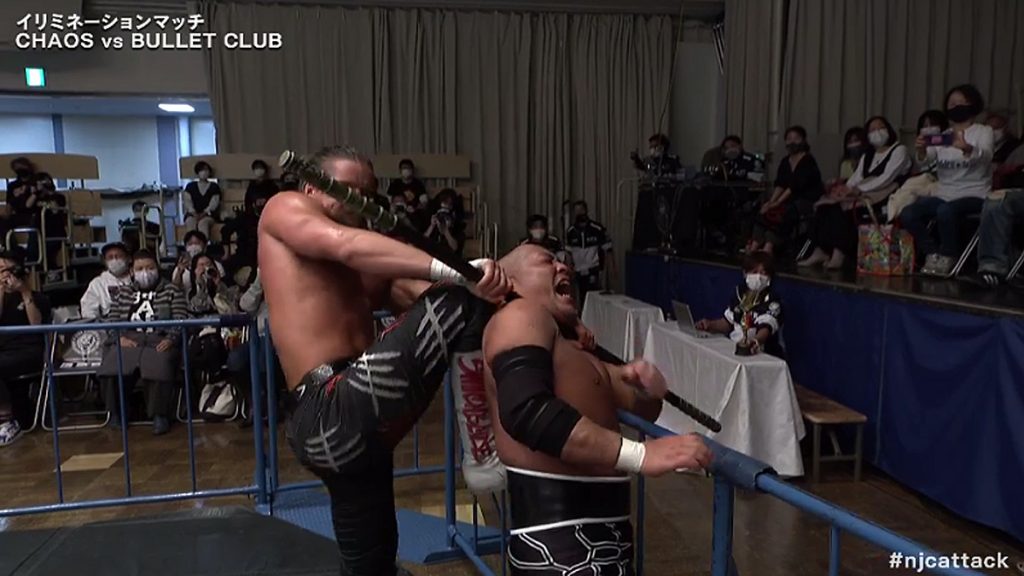 Tonga Loa mistakenly clotheslined Jay White over the top rope at 16:21. Ishii was dumped next at 16:36. Yoshi-Hashi battled the Guerrillas of Destiny alone. From outside the ring, Jado hit Hashi with his kendo stick and from inside the ring Loa dispensed of Hashi with a double axe handle.

The Guerrillas teamed up against Goto. Goto took out Loa but was tripped up by Jado. Tama gave Goto a Gun Stun. Goto fell to the floor at 19:49. Okada faced off against Tonga and Evil. Okada dodged Evil causing him to run into Tonga sending him off the apron at 20:41.

Dick Togo choked Okada with his garrote as Evil distracted the official. Evil put Okada out at 22:51 to win the match for his team. He was the sole survivor.

Gabriel Kidd, Satoshi Kojima and Hiroshi Tanahashi versus The United Empire (Will Ospreay, Jeff Cobb and The Great-O-Khan)

The faces launch an unexpected attack on the heels with Tanahashi leading the way with a running drop kick on Khan. It looks like they are setting up a feud with Khan and Tanahashi for the Never Openweight Championship. Kojima delivers his machine gun chops to both Khan and Ospreay. Cobb slams him off the top rope though before he can do his elbow drop. While everyone is tied up outside the ring Cobb pins Kidd with a Tour of the Islands. Khan fetches Tanahashi’s Never Openweight Championship holds it up in the air and then drops it at his feet.

Winners: The United Empire (Will Ospreay, Jeff Cobb and The Great-O-Khan)

Takagi pins Yujiro with Made in Japan. Phantasmo and Takahashi do some jaw-jacking with ELP threatening to kick the Time Bomb’s head off. It only takes one, you know. 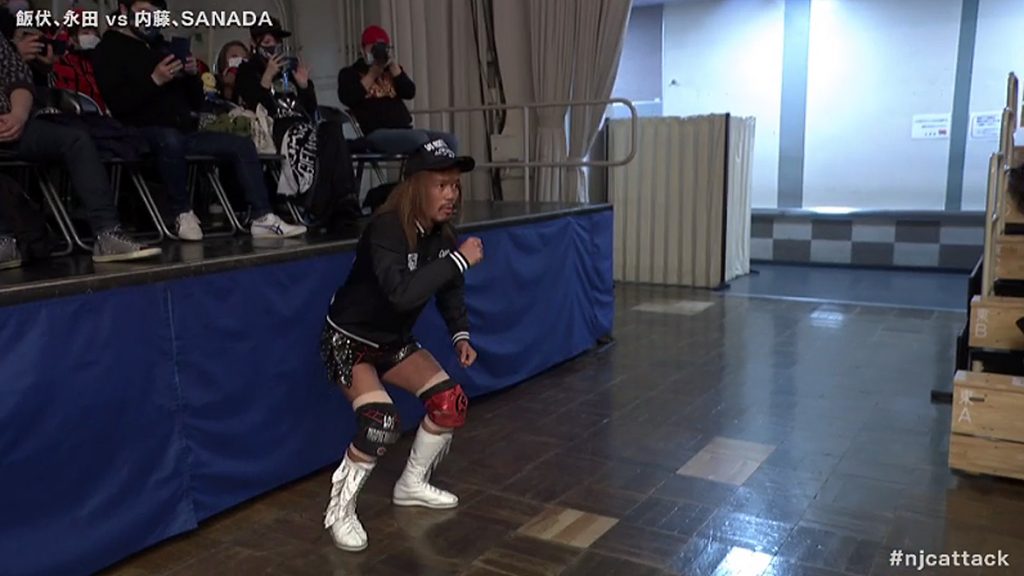 Naito comes out and is confused that there is no English announce desk. He sits in an imaginary chair and starts doing his own commentary. As Naito contains Ibushi, Sanada pins Nagata with a bridging roll-up.