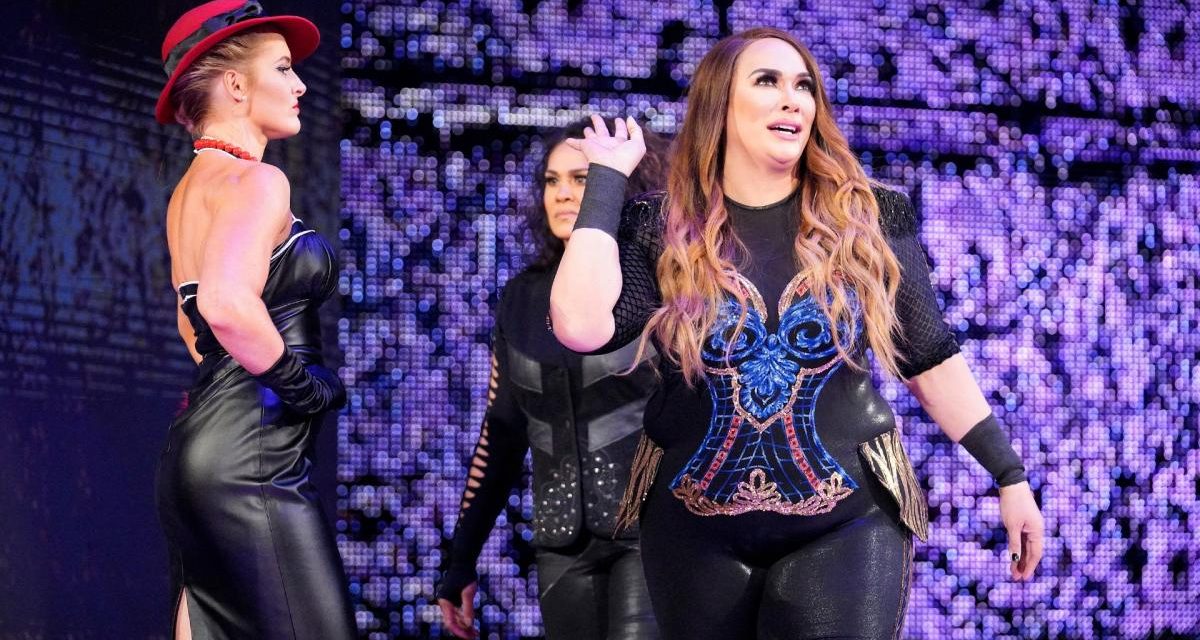 If you were a construction worker and you dropped your hammer on a co-worker or left nails on the ground so people stepped on them, you would be reprimanded and perhaps suspended or fired.

If you were a chef and you made customers sick by serving them improperly and poorly cooked poultry, didn’t clean up a spill so the saucier slipped and fell injuring themselves, you would be reprimanded and perhaps suspended or fired.

Anyone with any common sense wouldn’t expect anything less. Companies pay thousands to millions of dollars a year to promote their brands and they don’t need their employees making them look foolish, stupid or irresponsible in any way.

Knowing all of this, why has the WWE seemingly done nothing about the negligence of Nia Jax? And, yes, “negligence” is the perfect term to use in this situation. What else do you call the actions of someone who continues to put the people she works with in danger and has injured many of them?

Unfortunately, accidents are commonplace in professional wrestling. When you are putting on an athletic performance things are bound to happen. You can land awkwardly. Your grip can slip. You can misjudge distance. People get hurt. It is an accepted part of the risk just like crashes can and do happen in NASCAR, downhill skiing or skateboarding.

Speaking of skateboarding, Tony Hawk is recognized as one of the greatest to ever to ride a half-pipe and he has suffered more than 20 concussions in his career, never mind all of the broken bones.

The last gruesome injury WWE fans witnessed was when NXT’s Ridge Holland, who has been wrestling for five years, fractured his ankle when he attempted to catch a flying Oney Lorcan last October.

The worst one I was ever present for was on October 29, 1989, at Maple Leaf Gardens in Toronto. Dino Bravo threw Bret Hart out of the ring so hard that his ribs crashed hard against the ringside barricade. I will never forget the sound Hart’s ribs made when they made contact with the steel of the barricade. That dull crack echoed around the Gardens and everyone gasped. We knew something was wrong when Hart didn’t get up and when he did he appeared to be struggling to catch his breath. Hart would reveal years later that he was rushed to hospital because he couldn’t breathe.

Tony Hawk, Hart and Ridge Holland will testify that no matter how skilled, professional or experienced you are, Lady Luck can kick you in the “lower abdomen” just for fun. Wrestling is dangerous enough a profession when done right and all of the safety measures and precautions are taken by the talent themselves and the staff who support them.

What the industry doesn’t need is anyone who increases the existing risk of injury by performing in a thoughtless and hazardous manner. Nia Jax is clearly one of those people.

Let’s examine the laundry list of the botches we know of:

Jax throws Bayley out of the ring with such force that she separated her shoulder and couldn’t wrestle Alexa Bliss for the Raw Women’s Championship at SummerSlam.

Jax flubs a shoulder breaker ramming Charlotte’s head into her knee and then doesn’t catch Charlotte’s moonsault properly so the Queen crashes into the mat.

During the Battle Royal, Jax pitches Zelina Vega out of the ring and Vega is off WWE television for some time.

In perhaps her most infamous screw up, Jax punches Becky Lynch in the face giving her a concussion and a broken nose during a Smackdown invasion angle on Raw.

“I completely blacked out after I got hit, right? But I rolled to the ropes and got back up again. I guess my autopilot kicked in and I smashed half of Raw including Runny Ronnie, so it turns out that my autopilot is a badass too,” Lynch said in an interview.

Jax teams up with Tamina to fight Ronda Rousey and Ember Moon. Although Moon didn’t mention anything at the time her husband wrote on Twitter: “Hope this unsafe moron doesn’t hurt my wife again.” He deleted the Tweet afterwards.

Jax is facing off against the much smaller Kairi Sane and throws her into the metal stairs so hard her head is busted open. Sane Tweeted out photos of the aftermath.

You are strong. I have lost to you many times. I am small and you may think I’m weak.
However, you can never beat my heart. I will get back up again. #WWERaw pic.twitter.com/leXMwuiifO

Jax throws Mandy Rose out of the ring. Rose injures her arm and needs to be helped to the backstage area. Rose and her partner are pulled out of Survivor Series because of the injury.

This bring us to the latest incident in which Jax picked up Dana Brooke on Raw on January 25, 2021, in powerbomb that became a nasty chokeslam. Brooke was dropped on her neck. Luckily, she wasn’t severely injured.

In response to the criticism of concerned fans on Twitter Jax didn’t give an apology or an explanation. Instead, she insulted and attacked them. 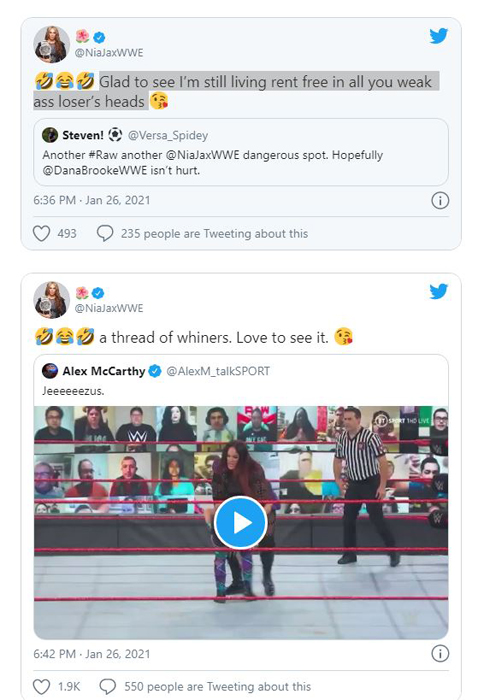 This isn’t the first time Jax hasn’t taken the consequences of her actions seriously or displayed such a lack of self-awareness. Last June she tore into Ronda Rousey for the way she treated her real-life friend Alexa Bliss when they wrestled together. When Rousey hurt Alexa over and over again, Jax admitted that she brought the problem up with WWE management.

“She (Rousey) came into the scene and she really didn’t get the proper WWE training that I was able to get at the Performance Center. So she had to learn things on the fly and her instinct is MMA-UFC fighting so her instinct is to go somewhere different that where our instincts tell us where to go in the ring,” she said at the time.

She then had this to say about fans criticizing her for the exact same thing.

The question once again is why is Jax allowed to treat fans this way and permitted to be a danger to herself and others in the ring? Why is it okay for her to act so unprofessionally inside and outside of the ring? How many superstars have to be injured or what will it take before some kind of action is taken by the WWE to protect their own talent, save them from Nia Jax?

So far, there hasn’t been a statement or any kind of answer from the WWE. Like the other incidents, it is business as usual with Jax continuing to wrestle on WWE television. It should be known that Jax is distantly related to The Rock with her father being a first cousin of Peter Maivia, Johnson’s grandfather and she considers The Rock’s mother, Ata, to be an aunt. Does any of that family history and WWE history play a role? No one can be sure. What we can be sure of is that Nia Jax has a history of flubbing moves, injuring people and she has continued on without losing her prominence in the company.

In a recent interview on The Joe Rogan Experience, the Undertaker said: “I don’t think people really realize is that in any given match on any given day, you are two inches away from something catastrophic happening.”

It seems when you are wrestling Nia Jax those two inches become just one.