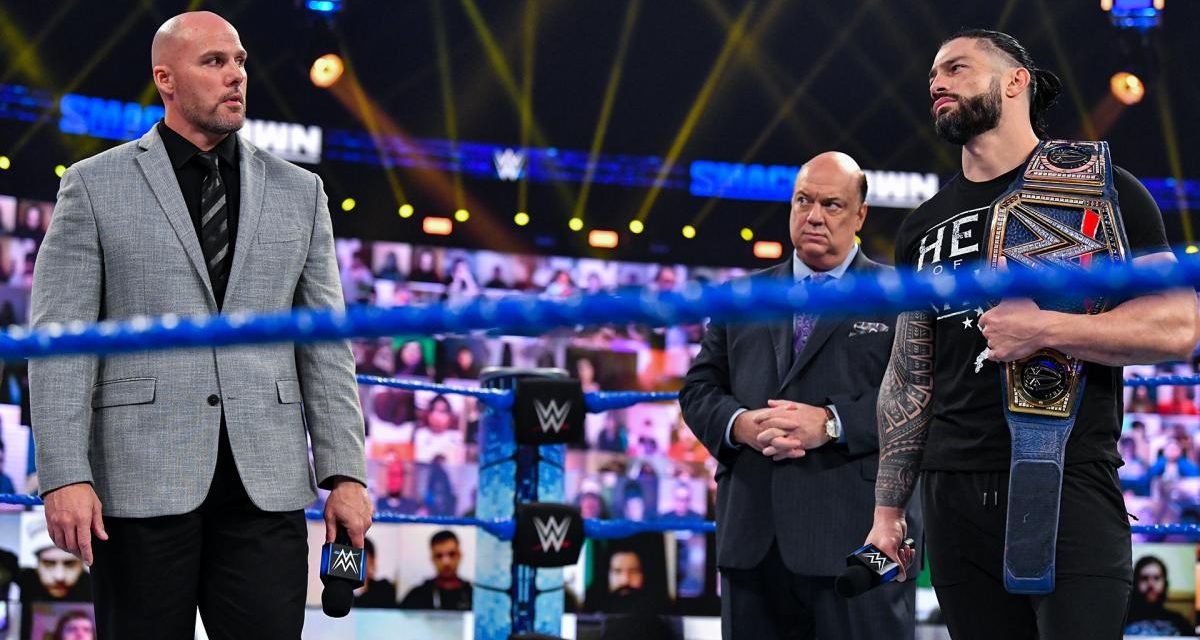 He calls Pearce out to the ring, and Pearce asks what he can do for them. Roman shows him a video package he prepared, featuring the events that transpired leading up to Kevin Owens’ decimation last week at the hands of Roman and Jey Uso. He asks Pearce what he has to say for himself, and Pearce asks what he wants him to say. The champ tells him to own up to causing Owens’ injury and leaving him unable to provide for his family. Roman gets fired up, feeling disrespected by Pearce. He grabs his collar and shoves him around, and Paul Heyman has to calm the Tribal Chief down. Roman tells Pearce that he’s safe, for now.

Crews starts off fast with a dropkick and a bicycle kick for a two count. Big E avoids a top rope attack from Crews and drops him with a back elbow. He drags him out to the apron and delivers his Big Splash, but when he goes for a suplex, Crews escapes and delivers a kick and a series of suplexes and spears on the corner. He delivers a big splash in the corner and then a series of German suplexes for 2. Crews takes out Big E with a moonsault off the apron on the outside, but only gets a 2 count when he brings him back in and attempts a pin. 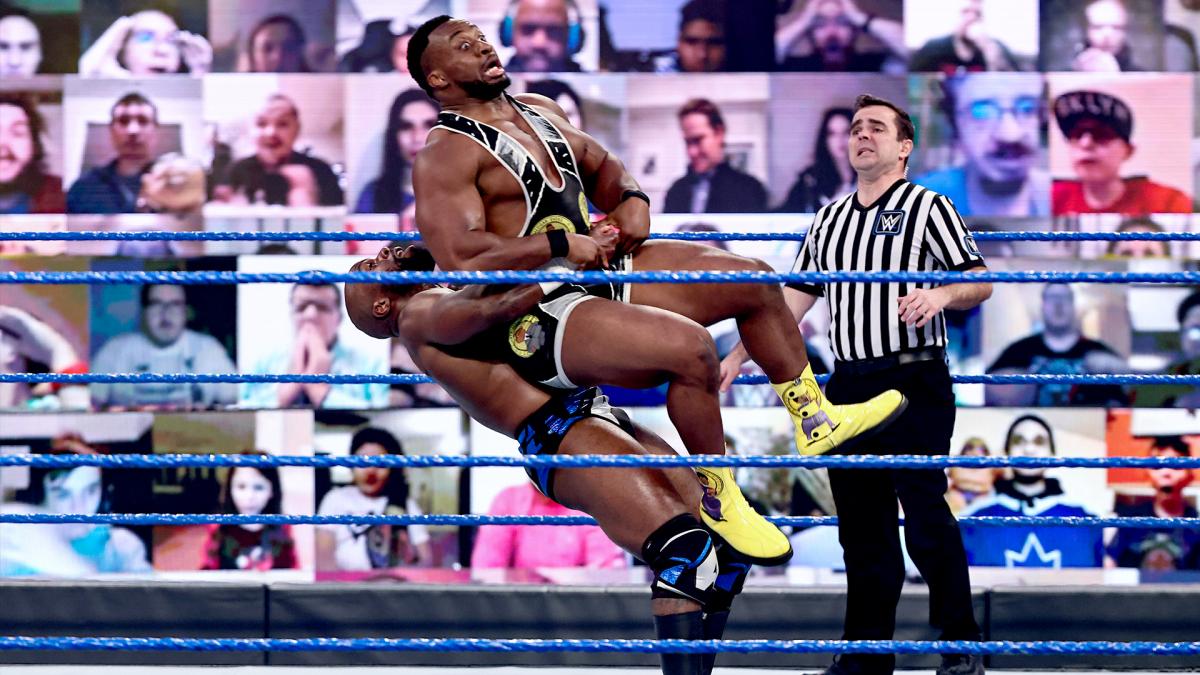 The challenger stacks Big E up on the top rope and delivers a superplex, but the following pinfall is a weird one, as both men’s shoulders are down. The ref awards the victory to Big E, but Crews won’t accept it, slapping Big E in the face when he offers him a fist bump. Big E tells the ref to ring the bell, and the two go back at it. Big E wastes no time delivering a series of belly-to-belly suplexes and a Big Splash, but Crews fights out of the following Big Ending attempt.

Crews goes out to the apron and blocks a spear attempt by Big E with a knee. He goes to the top rope and delivers a frog splash, but he only gets a 2 count. Crews looks for a slam, Big E fights out but gets rolled up for 2. Crews delivers 2 kicks, a spinebuster, and a standing moonsault, but Crews still only gets a 2.

With frustration beginning to plague him, Crews looks for a powerbomb, but Big E turns it into the Stretch Muffler. The challenger is able to fight out of it and escape a Big Ending attempt to deliver a kick to the skull of Big E. The champ fights out of a finisher attempt from Crews and reverses an corner splash attempt into a vicious uranage before delivering the Big Ending for the win.

Backstage, Sonya Deville, who is taking on a backstage role since she was banned from WWE at SummerSlam, approaches Adam Pearce, telling him he’s got a lot on his plate, considering he’s adding himself into the gauntlet match for an opportunity at Roman Reigns later tonight. Pearce promises that he isn’t going to put himself in the gauntlet match, as it’s been six years since he last wrestled.

Backstage, Alyse Ashton interviews Bianca Belair, the latest woman to announce her entrance in the Royal Rumble. She doesn’t get a chance to say a word, as Bayley interrupts her. She says even if Belair did win the Rumble , she would squander her opportunity. Belair retaliates, saying that she’s sad she can’t challenge Bayley when she wins the Rumble, since Bayley squandered her title reign.

Angelo Dawkins starts off against Dolph Ziggler, who is dominated by his much stronger opponent via a shoulder tackle and a dropkick for 2. Dawkins tags in Ford and they deliver an assisted splash for 2, and we see Ford grab at his leg quickly. Ziggler grabs a headlock on Ford and tags in Roode, and the two stomp down Ford in their corner. Roode roughs up Ford, but Ford fights back, beating his challenger down in the corner. Roode goes right to the leg to get an advantage, but Ford sends him and then Ziggler over the top rope to the floor. He delivers a swanton to the outside, but injures his leg in the process. We see Ford struggling to get back up as we go to commercial. 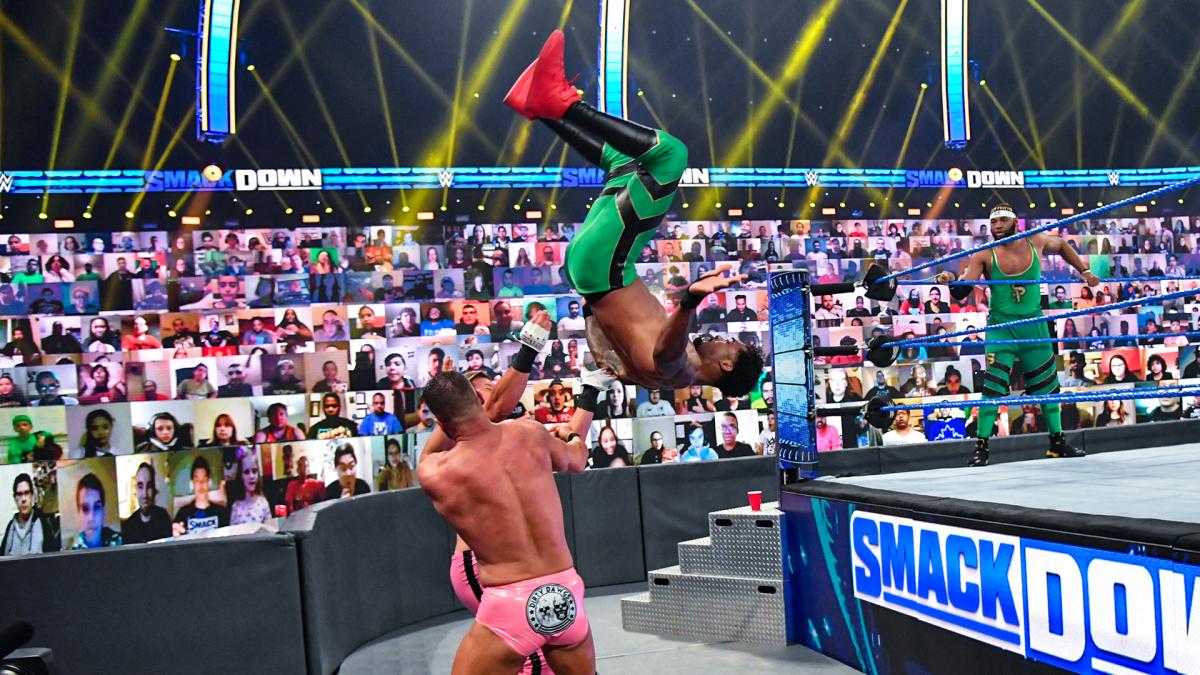 Montez Ford takes out both of his opponents with a swanton. Photo: WWE

When we come back, Dawkins is stomping Roode down in the corner and tossing him with a series of suplexes. He delivers a spinning splash and a bulldog for a close 2. Ziggler tags himself in unbeknownst to Dawkins, and delivers a dropkick for 2. He rips at the eyes of the champ and locks in a brutal front facelock. Roode is tagged in, and the Glorious One delivers a neckbreaker for 2. Roode tags in Ziggler and attempts to throw him into Dawkins, but the champ moves and tags in Ford, who despite his injured leg, delivers some powerful strikes, including a discus lariat for a close 2.

Ford drags himself to the top rope, but Roode distracts him, allowing Ziggler to meet him at the top to deliver an avalanche X-Factor for a very close 2. The Show-Off looks for a superkick, but Ford answers with one of his own. Roode breaks up the pin attempt following the superkick, but Dawkins comes in and takes him out. Ford goes for the tag, but Roode takes out Dawkins. Ford tries for a rollup but only gets 2, and Ziggler goes right to the injured leg.

He tags in Roode, who delivers a Fisherman’s Suplex for 2. He looks for the Glorious DDT, but Ford counters with an enziguri. Ziggler is able to tag himself in, and he and Roode deliver a beautiful Spinebuster/Zig-Zag combo to get the win.

Backstage, Sonya Deville and Adam Pearce plan the future of the tag titles, but they’re interrupted by Paul Heyman. Heyman says that he knows Pearce didn’t want the backstage job, that he always wanted to be the champ in WWE. He says he pulled some strings, and Pearce is in the Gauntlet Match tonight. Pearce looks less than pleased.

Backstage, Billie Kay approaches Ruby Riott and Liv Morgan. She proposes that they turn the Riott Duo back into a Riott Squad by adding her. They decline, and Kay breaks down in tears. Morgan starts to say something about how it’s not that they don’t want her in their group, but Kay cuts her off happily, saying she knew she’d come around. She assures them that she can be punk like them, even showing them that she added “mosh pitting expert” to her resume, before skipping away in glee.

Rey Mysterio starts off against Sami Zayn, who brings out his own camera crew to document the so-called backstage conspiracy that has been plaguing Sami these past few months. That camera crew gets to see Sami take a dropkick, a 619 and a Frog Splash that gets Mysterio the pinfall and allows him to move on in the Gauntlet match.

Shinsuke Nakamura comes out next, and the two lock up. Nakamura uses his size advantage to shove the smaller Rey around, but Mysterio uses his speed to hit Nakamura with a kick for 2. Rey delivers a hurricanrana that sends Nakamura to the outside, but when he goes for a baseball slide, Nakamura catches him and delivers a knee on the apron. He goes for a jumping knee, but Rey moves out of the way, goes back inside the ring, and then dives outside to deliver a sunset flip powerbomb. Nakamura recovers quickly and delivers a brutal knee strike, and then brings Rey back into the ring to deliver Good Vibrations and a single-leg dropkick for 2.

Nakamura delivers a knee drop for another 2, and then stacks Rey on the top rope. He looks for a superplex, but Rey pushes him off and delivers a senton. He rolls him up for 2 and then goes to the apron, but Nakamura catches him with a kick. Rey slams Nakamura into the turnbuckle and goes for a flying attack, but Nakamura catches him and goes for a powerbomb, which Rey reverses into a hurricanrana.

The hurricanrana sets Nakamura up for the 619, which Rey delivers. Rey goes for a Frog Splash, but Nakamura catches him and locks in an armbar to get the win. King Corbin comes in and attacks Nakamura early as we go to commercial. 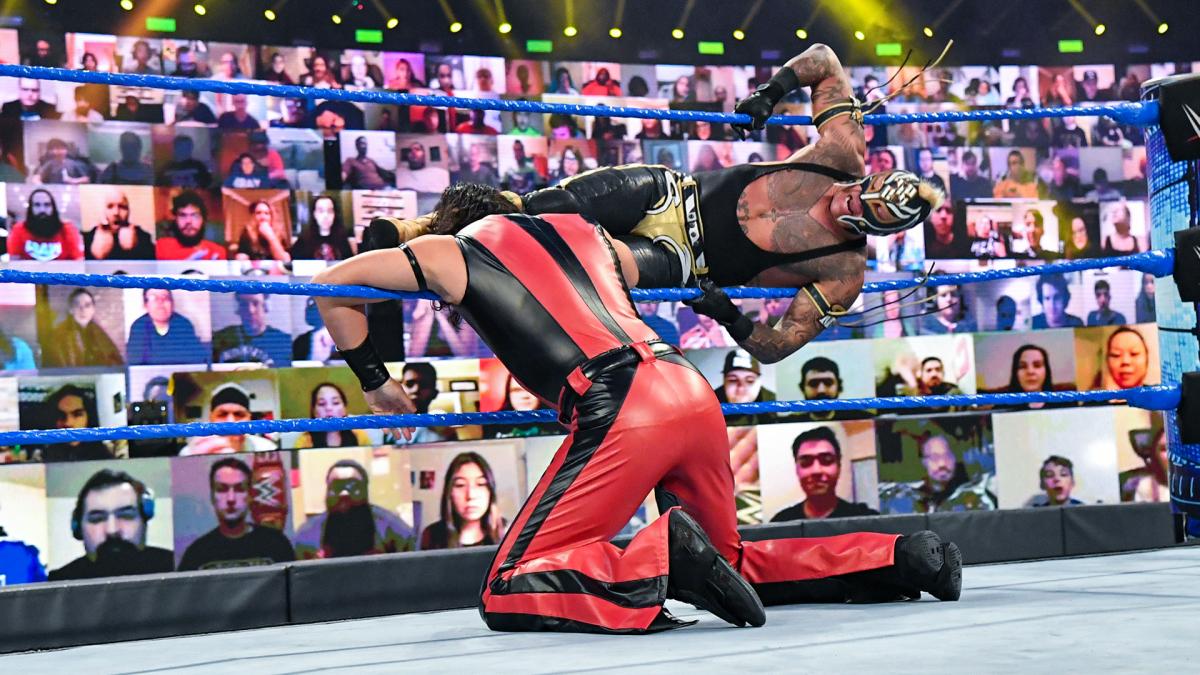 Nakamura takes the first of many finishers in the Gauntlet Match. Photo: WWE

He delivers a back suplex that gets another 2, frustrating the King even more. He goes for a suplex, but Nakamura escapes and delivers a single-leg dropkick. Nakamura gets a second wind, delivering a series of kicks. He goes to the second rope and delivers a flying kick for 2. Nakamura goes for the Kinshasa but instead gets caught with the Deep Six for 2. Nakamura locks in a triangle hold, but Corbin turns it into a powerbomb before attempting his ring-around-the-ringpost clothesline. Unluckily for him, Nakamura catches him with the Kinshasa as he re-enters the ring to put the King down for the win. 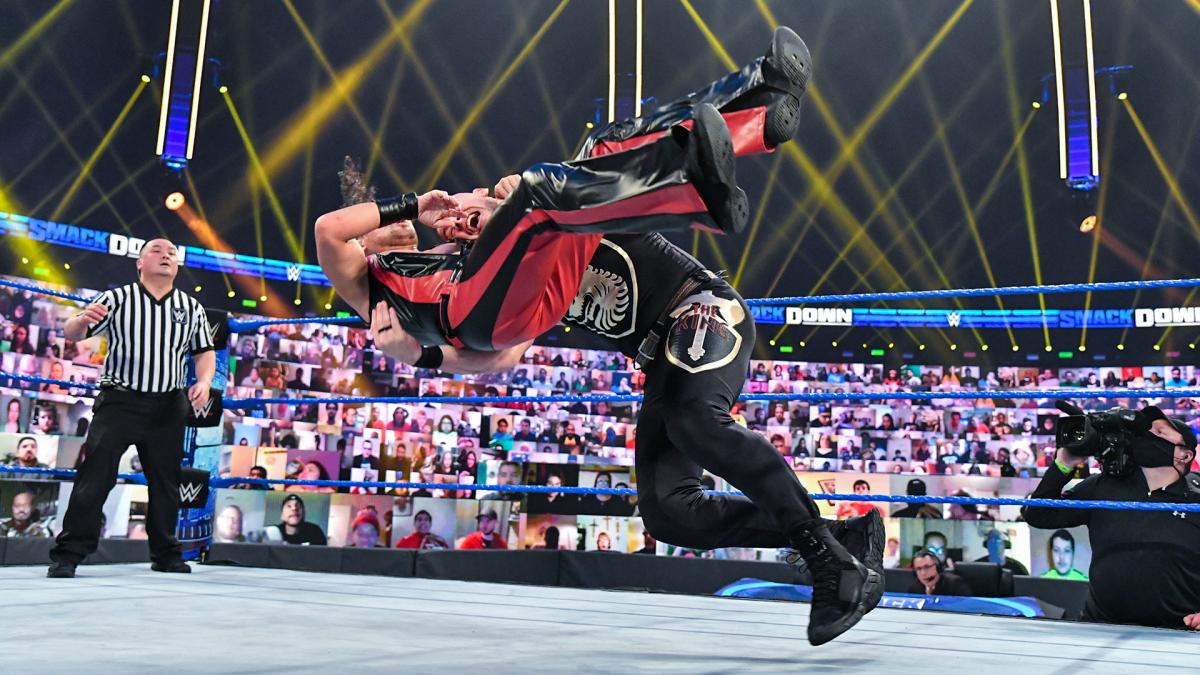 Daniel Bryan comes out next, and he starts off fast, beating down Nakamura with kicks. He sends the King of Strong Style to the outside and delivers a suicide dive, but when he goes for an attack from the top rope, he gets caught with a kick to the gut. Nakamura delivers his inverse exploder suplex and looks for the Kinshasa, but Bryan turns it into a single-leg crab. Nakamura looks to fight out, but Bryan hits him with a devastating bridging German Suplex for a close 2.

Bryan employs the Yes! Kicks, but as usual, Nakamura dodges the last one and locks in an armbar. Bryan reverses the armbar into the Yes! Lock, but Nakamura is able to use his long legs to get to the ropes. Bryan keeps the pressure on Nakamura, attempting to deliver an avalanche hurricanrana. However, Nakamura tosses him from the top rope and delivers a flying kick for 2. The King of Strong Style delivers a series of knees and goes for a kick, but Bryan ducks and delivers his own kick. Nakamura goes for the armbar again, but the leader of the Yes! Movement turns it into a rollup for a close 2.

The two trade powerful strikes, with Bryan getting the best of Nakamura in the exchange. Bryan delivers his corner dropkicks, but when he goes for the third one, Nakamura catches him with the Kinshasa to get his third win of this Gauntlet Match.

Roman Reigns escorts Adam Pearce to his match that he doesn’t really want to compete in, judging by the fact that he’s wearing sweatpants and a WWE training jacket. Jey and Reigns come in and attack Nakamura with a Superkick, a Superman Punch, and an Uso Splash. They direct Pearce to go into the ring, and Jey hits Pearce with a superkick. He drags Pearce onto Nakamura, and Roman intimidates the ref into making the three-count.

The show ends with the Universal Champion standing tall over the man who is his Royal Rumble Challenger and the man who should have been. 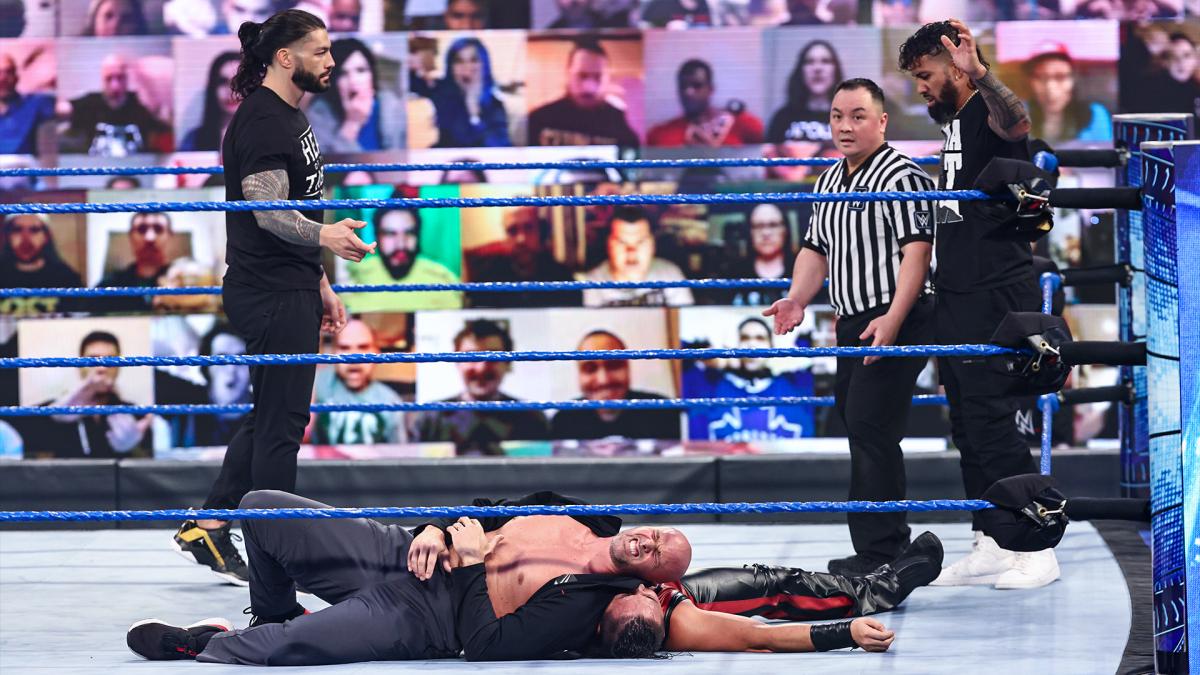 I honestly don’t know what to think of Adam Pearce challenging for the Universal Championship. Photo: WWE

This was a really great show. Very entertaining matches, some fun story with Sami Zayn, and while I’m not quite sure about Adam Pearce against Roman Reigns, I’m willing to see where it goes. The question is, why can’t it be this good every week?