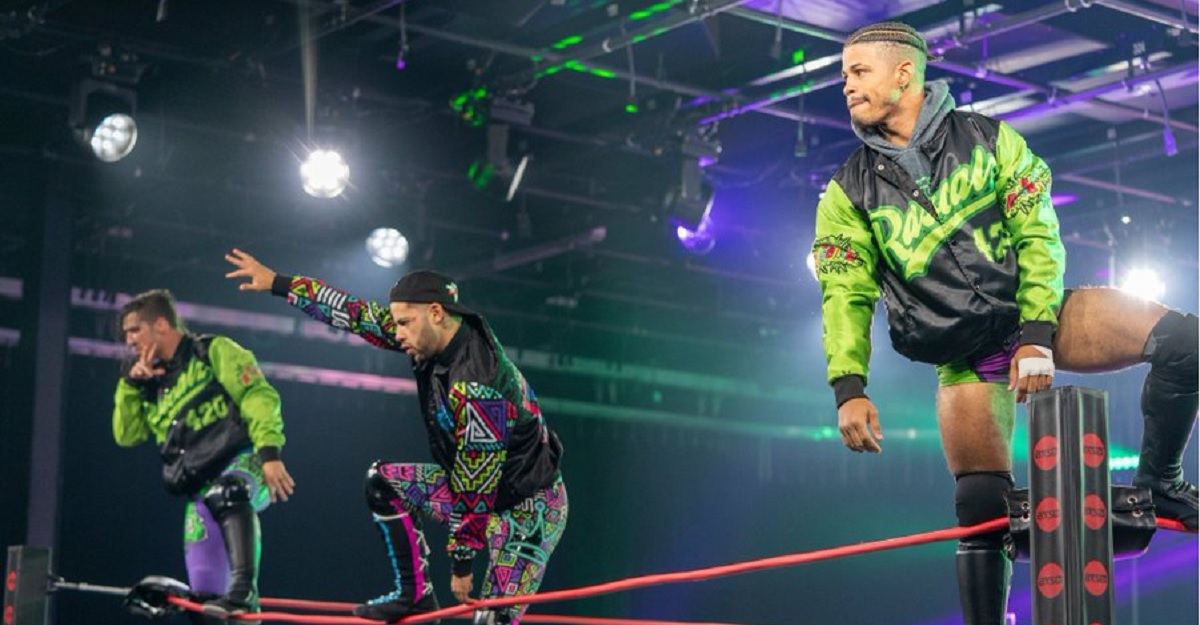 During their two years in Impact Wrestling, the Rascalz – Trey Miguel, Dez, and Wentz – have been real throwbacks to the company’s classic X-Division, showing off high-flying moves in matches that were fun and exciting. Their fast-paced in-ring style – a complete opposite to their laid-back out-of-ring Treehouse antics – made them very popular with the Impact fans. And so their match on Tuesday’s episode was really fun, but the fact that it was their last match with the company, also made it a bit bittersweet.

Before the opening theme, they recapped the events of Turning Point, including the two title changes and the return of Joe Doering.

Josh Matthews explained that the no-DQ stipulation was added because of the decimation that Moose gave Willie that resulted in Moose losing the match by disqualification. Willie started off hot, hitting Moose with some big kicks and cannonball in the corner. But on the floor, Mack got thrown over the ringside barrier when he tried for a running attack, and he splatted on the floor hard. After that, Moose just dominated him for several minutes, whipping him into the barriers, and continuing the beating in the ring. Mack avoided a shoulder tackle, and Moose injured his shoulder on the post, which allowed Willie to mount a comeback – Moose’s selling of the shoulder was very good here. Willie dropped Moose with a big lariat, but crashed hard when Moose rolled out of the way of a Superfly Splash, and then ate a Spear. Instead of pinning Mack, Moose got on top and ground-and-pounded him into unconsciousness, just like on Saturday, and the referee called for the bell.

Like in Saturday’s match, this was a great use of Moose. They’re now booking him like a deadly serious monster, and it’s working great.

The Rascalz were upset about being evicted from the Treehouse. They reminisced about some of their favourite memories, though their memories were naturally hazy.

Tommy Dreamer interrogated the Deaners, noting that Cody was still a suspect. The Deaners stooged on Johnny Swinger, suggesting Dreamer check his fanny-pack for evidence.

Gio was independent wrestler Gio Galvano, who has appeared on a few House of Hardcore shows in the past, and he was making his Impact debut here. The match barely got started when Eric Young and Joe Doering came down the ramp. Doering entered the ring and destroyed both guys. Eric Young cut a brief promo, saying that the world belonged to him and Doering.

This was fine to help showcase Doering as a big scary threat.

Gia Miller interviewed new Knockouts Champion Deonna Purrazzo who was in her dressing room with Kimber Lee. Lee said that now that Su Yung had been dealt with, she was going to focus on the Tag Team Championship tournament, so they both would have gold. The lights flickered, and when that stopped, there was a warning written in lipstick on the mirror. They were both scared.

Heath and Rhino were in an office in the back talking about Heath’s injury rehab, when Rhino saw Young and Doering in the hall. He went outside and basically told them that he wasn’t going to let him and Heath get punked out. So Young and Doring punked him out, sucker-punching him and then stomping a mudhole on him on the floor. Then, Heath opened the door and they pushed him back inside and closed the door.

During this match, Josh Matthews and Madison Rayne plugged that Chris Bey and TJP will be appearing on the New Japan Super-J Cup show on December 12, the same night as Impact’s Final Resolution special event. They also talked plugged Hard To Kill which is their PPV on January 16, their Impact Facebook pop-up store, and the Impact+ streaming service. All of which are more interesting than talking about Brian Myers. Steve took early control, but when they exchanged punches on the apron, Myers shoved Steve hard into the cornerpost. Myers was in control coming out of the ad break.  Steve stunned his way out of a sleeper hold, and then went into berserker mode, blasting Myers with clotheslines and a cannonball. Steve locked on a Straight Jacket submission hold but Myers got to the ropes. Steve went for a Sheik Suplex, but Myers punched him right in the eye, blinding him. Myers then hit a big clothesline for the pin.

This match was technically fine, though it may have been better if Myers had actually thumbed Steve in the eye to blind him. At least that would added some controversy to get mad about. As it stands, Myers continues to be completely bland.

The Flashback Moment of the Week was from the November 3, 2011 episode. Gail Kim and Madison Rayne beat Brooke Tessmacher and Tara to win the Knockouts Tag Team Championship, with the assist from Karen Jarrett.

Johnny Swinger was being interrogated by Dreamer, and freely showed Dreamer his gun. Dreamer concluded that Swinger was the one who shot John E. Bravo, and said that next week, Swinger would have to go to Wrestler’s Court.

Alisha played some mind games up front to take an early edge, and she and Dashwood worked well together in the beginning. But Dashwood’s need for getting pics for her socials was too strong, and as she posed for photos, Alisha got flattened by their larger opponents. Havok and Nevaeh pummeled Alisha while Dashwood posed for more photos by Kaleb. Dashwood finally came in to help Alisha, but eventually sacrificed Alisha in order to save herself. She bailed, and the numbers game was too much for Alisha, who got hit with a Wheelbarrow Stunner Double Combo and pinned.

This was a bit sloppy at times. The “all about me” story of Dashwood repeatedly abandoning her partners is getting to be a bit stale, so hopefully they move her into a good singles program. A feud with Alisha as a result of this match may be a good new direction.

Backstage, Jordynne Grace was the phone with her mystery partner. She mentioned that her partner was planning on retiring, so she was glad she would return for the tournament. Let the speculation begin.

After a couple of big mid-ring collisions, Hernandez showed off his “SuperMex” aerial skills, hitting a flying shoulder tackle and then a Suicide Dive over the top to the floor.

In the ring, he levelled Bahh with a big clothesline and cranked on a neck wrench. But Bahh fought out of it, and hit a pair of Front and Back Avalanches that took the wind out of Hernandez. Hernandez escaped a Samoan Drop with a big elbow and boxed Bahh’s ears to disorient him. A slingshot off the ropes put Bahh down and Air Mexico kept him down for the three count.

This was a fun match between two big guys. For his size and age, Hernandez with his high-flying moves is quite impressive.

Backstage, Rohit Raju was boasting about his accomplishments to an unimpressed Scott D’Amore. When Raju left, TJP came up to D’Amore who told TJP that he sympathized with him for getting screwed in his title match against Raju. Because the stipulation in that match was that TJP could never get another title shot against Raju, D’Amore dropped some not-so-subtle hints that TJP should take on a new identity, perhaps under a mask, and exploit that contractual loophole. TJP seemed to catch on – which is good, because nobody likes a babyface who’s a clueless idiot.

A video packaged recapped the Good Brothers’ return to Impact up to their title win on Saturday.

Scott D’Amore was with the champs backstage, and Ethan Page interrupted the conversation. Page made an official request for a title match. The Good Brothers said that if Page could beat a “phenomenal” opponent of their choosing, they’d grant him a title mach. Page left, and D’Amore and the Good Brothers continued to drop hints about who the “phenomenal” opponent could be.

Wentz and Trey did a nice tribute to ECW’s scientific stalemate sequence to open the match.

Dez and Swann squared off next, and the emotions on the faces of these friends was evident. But then Swann’s boot in Dez’s face was also evident as Swann hit the first big offensive move of the match.

Things sped up after that, and the action became too quick to call heading into the break. Back from commercial, and things had slowed down with Dez and Wentz in control over Trey. But Trey hit a nifty reversal that put both of his buddies down, allowing him to tag in Swann, who was on fire with some dazzling offense, nearly ending things a couple of times. The four of them circled up and started punching each other, and then they hit a foursome of Superkicks on each other, knocking all of them down. A nice sequence saw Dez do an Assisted Standing Moonsault Press that sent Wentz on Swann, and it was broken up when Trey superkicked Dez who fell onto Wentz. Some more quick moves after that, with a little more aggression being shown by Swann, until he ate some more kicks. He was still able to move out of another ASMP attempt, so Wentz landed hard, and then Trey hit a big Meteora on Dez. With Dez down, he was prone for a big kick to the back of the head by Swann, who covered him for the pin.

After the match, the emotions flowed from all four. The Rascalz embraced and then hung their jackets over the top rope as a farewell salute to Impact.

The match was really good – an excellent X-Division style match. And the sendoff to the Rascalz was emotional and classy.

The cameras followed the foursome to the back, where they thanked each other and embraced.

Suddenly, a garbage can came flying into them from off-screen, knocking them all down. Then Sami Callihan and Ken Shamrock laid a vicious beatdown on the Rascalz before turning their attention to Rich Swann, who faces Shamrock next week for the World Championship.

This was pretty much a one-match show, with the Rascalz farewell match being a definite highlight of the year. As for the rest of the show, it was pretty standard, with some good storyline and character progression in some cases – notably, Moose and the Eric Young/Joe Doering pairing.