IMPACT: Bound For Glory go-home show does what it needs to do 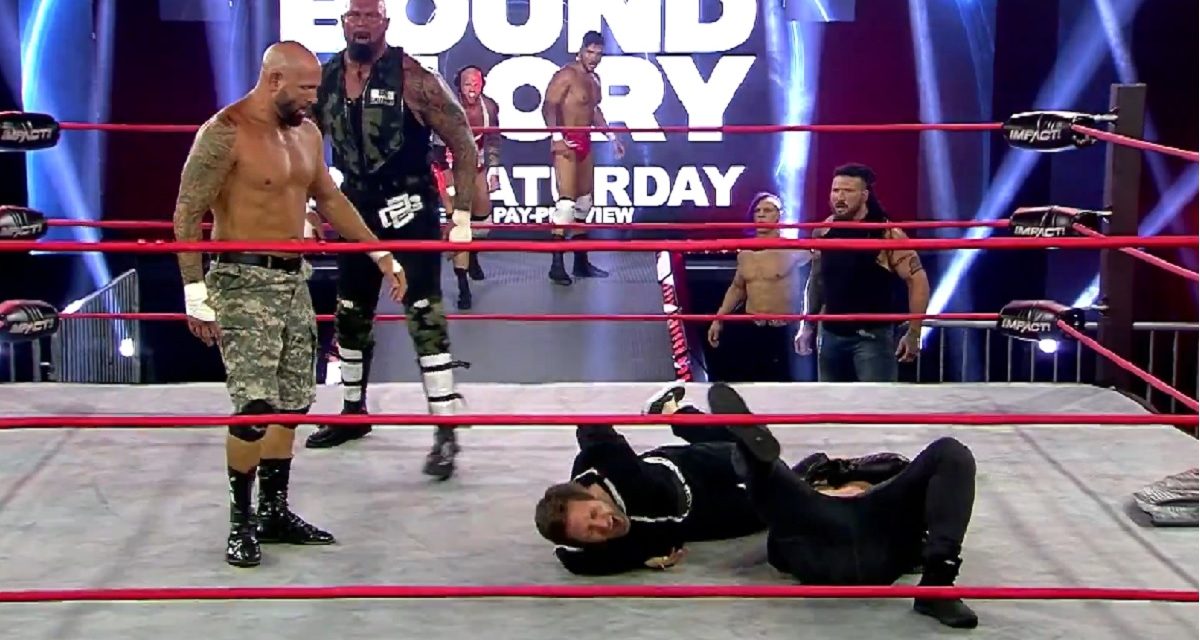 With Bound For Glory taking place this Saturday, this week’s go-home episode was everything it needed to be. The matches on the show helped build the hype for the PPV matches, the non-wrestling segments helped serve those storylines as well. Nothing got thrown together at the last minute. And, most importantly, they didn’t try any last-minute swerves or surprises to shake things up unnecessarily.

Match 1: Heath vs. Cousin Jake vs. Hernandez vs. Alisha Edwards vs. Rhino

The winner of this one will enter the Gauntlet match on Saturday night last, and the person who takes the fall will have to enter first. Off the top of the match, Alisha trash-talked all of the men, basically daring them to hit a woman. Nobody actively hit her, but she did end up getting unintentionally squished at one point. She would try to sneak in and steal the cover anytime someone was down. At one point, she did a flying dive off the top and took out most of her opponents when they were fighting on the floor. Jake and Hernandez joined forces for a bit to beat up Rhino. Hernandez finally had enough of Alisha and went for a Border Toss but Jake made the save. Rhino tried to GORE GORE GORE Hernandez, but he moved, and Rhino hit Alisha instead, knocking her flat.

A shocked Rhino paused in regret of what he’d done, and was prone for a rollup by Hernandez who held him down for three. The story they told with Alisha was fine, so makes the inclusion of women in the gauntlet match seem reasonable. With both Rhino’s and Heath’s career on the line on Saturday, one of them taking the fall was the logical build to the PPV, so the match served its purpose in that regard.

A video package ran down the feud between Moose and EC3, who will face one another at Bound For Glory in an undisclosed location. It would be neat if they used the Hardy compound… they still have access to that set, right? The video simply reinforced how bad this feud has been. At this point, the best thing that could happen is that the location is so undisclosed that the camera crew can’t even find it, and they don’t show the match on the PPV.

Jimmy Jacobs had a sit-down interview with Moose. Moose immediately blew up at Jimmy and walked off the set. Then, a trio of hired goons in EC3 hoodies stormed the set and put a bag over Jimmy’s head and abducted him and threw him in the back of an SUV.

Backstage, John E. Bravo was yelling at his groomsmen over their failed attempt to find him a hall for his wedding rehearsal. Wow, they made a Dino Bravo murder joke. #SwingerIsGold  Kaleb came in as the hired wedding photographer, but he was only focused (see what I did there) on taking pictures of Tenille Dashwood. Taya came in and tried to calm down Bravo, but he stormed off in a snit.

Deonna Purazzo did a sit-down promo about the legacy of the Knockouts title matches at BFG, and said that she has what it takes to continue in that fine tradition, and Kylie Rae does not. She said that Rae’s emotions will get the best of her, and Purrazzo will capitalize on it, win the match, and retain her title.

If Rosemary wins this match, Havok will help resurrect Father James Mitchell to officiate Rosemary’s wedding. It was all Havok early on, as Rosemary wasn’t able to combat her size and power advantage. Eventually, Rosemary sidestepped a charging attack, and flattened Havok with a High Cross Body off the top. She followed that up with a pair of Spears to get the win. After the match, Rosemary celebrated, but Havok was scared at the idea of having to bring back Mitchell from the undead realm. This was short, but fine. Havok is like Nia Jax without the botches, and Rosemary is always solid in the ring. 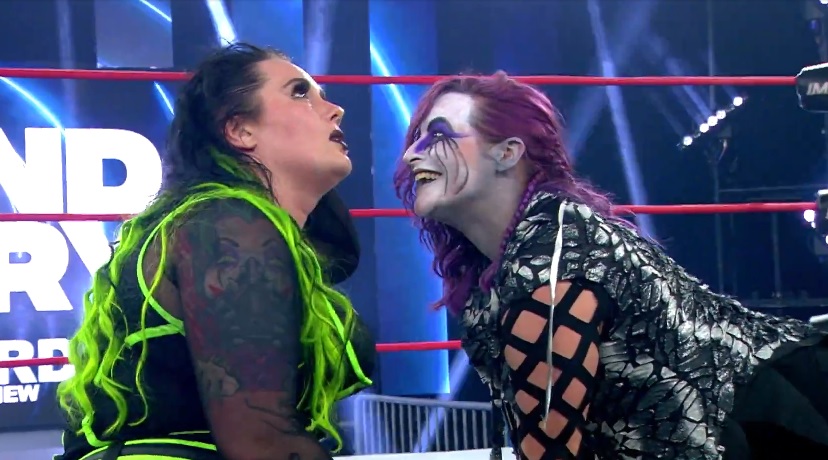 A video package aired hyping the 4-way match for the Tag Team Championship at BFG. This has a good chance of being match of the night on Saturday.

Kylie Rae had her own sit-down promo, and she said that she wanted to win the Knockouts Championship to be an inspiration to young girls. She apologized for losing her temper over the past few weeks, but Deonna triggered her when she broke Susie’s arm. But that she’s not looking for revenge; she’s just looking to win the title.

The goons arrived at a warehouse, dragged Jimmy inside and seated him in a chair in an empty room. EC3 came in with a chair of his own and sat down beside him, telling him “It’s just you and me,” and said that Jimmy should interview him. Jimmy asked what EC3’s narrative was now, and EC3 said that the narrative was what it always has been and then in the next breath said that the narrative has changed. He showed off the black eye that Moose gave him last week and said that he was glad Moose finally emerged as a strong opponent. He said that he finally saw the Moose that Moose should have been all along. More double-speak about how Moose now controlled his own narrative, but it wasn’t Moose’s to control. Blah, blah, blah, unintelligible rambling, waste of time, you get the drift. Seriously, this was like one of those bizarre, incoherent Ultimate Warrior promos from back in the day. #SimplyAwful

These two have had a lot of bad blood historically, so they dialed it up to 11 in the opening seconds, with Eddie getting the edge with a running dive through the ropes to flatten Sami on the floor. But a second one got thwarted, and Sami dropped Eddie with a Flip Suplex on the entrance ramp to take control. Back in the ring, Sami employed an eye rake to blind Eddie and leave him vulnerable to more damage, including some vicious whips into the turnbuckles, and a series of hard chops. Eddie fired up, though, and hit a desperate head kick while Sami was on top of the ropes, and followed up with a hurancarana and a Blue Thunder Bomb for a close count. Sami turned Eddie around with a big lariat and hit a sit-out powerbomb for 2. They had a chop battle in the middle of the ring, and after an exchange of hard shots, Eddie nearly got the win after a Tiger Driver. Eddie was prepping for the Boston Knee Party, but Sami took out his cellphone and pressed a button, turning the arena dark for a few seconds. When the lights came back on, Ken Shamrock was on the ring apron. As Eddie charged towards Shamrock, Sami ran up behind Eddie and rolled him up for the pin. After the match, Shamrock hit the ring and dropped Eddie with a huge Suplex and then tried to disable Eddie with a tight Ankle Lock until Sami instructed him to release the hold. Sami and Eddie have good chemistry in these hard-hitting matches, and this was no exception.

They did a hype video package for the 6-person Scramble Match for the X-Division Championship match at BFG.

The story here was Rohit doing what he could to avoid being in the ring, including stalling and tagging himself out before anyone could touch him. And even when he did try to tag in, Bey and Grace wouldn’t, since they saw him as a liability. When he did finally have to fight, he proved his teammates right. At one point, everyone hit finishers, and Rohit tried to steal the glory by going for the cover, even though he wasn’t legal. Rohit started barking orders at Bey who finally had enough. He dropped Rohit with the Bey Blade and allowed Trey to get the cover. This went about the way it was expected, with Rohit playing both obnoxious and chicken really well. The match at the PPV should be a fun one, reminiscent of the early days of the company when X-Division matches routinely stole the show.

They aired a video package showing the buildup for Rich Swann’s title match against Eric Young at BFG.

Gia Miller did a sit-down interview with Eric Young. Eric said that he tried to give Rich Swann and Scott D’Amore a chance to avoid the damage Eric has caused, and will cause on Saturday. He said they just interfered in his plan to become, and stay, champion. Rich Swann attacked him, and they fought out of the room, down the hall, and brawled their way right out of the building. They continued fighting as they cut to a commercial break.

Match 5: The North vs. The Good Brothers

The Brothers confounded the North early on, taking their own shots before the North could do anything sneaky. A frustrated North rolled to the floor to regroup, leading to the final commercial break of the show. Back from break, and the Good Brothers were pummeling Alexander in their corner. They took turns stomping and beating him, and it looked like it would be a cakewalk for the Brothers. Until Page finally took a cheap shot from the outside that blindsided Anderson. And then it was the North’s turn to lay on the punishment. They isolated Anderson and took turns beating him up. Anderson was finally able to get a tag to Gallows, and the big man delivered the hurt to both of the North. The Brothers were looking to end things with a Magic Killer on Alexander, but Page made the save, leading to a four-man donnybrook. The referee, having lost all control, had no choice but to call for the bell, ruling the match a no contest. Ace Austin and Mad Man Fulton ran in to join the fray, and they were followed shortly thereafter by the Guns. The Guns and the Brothers dispatched the other teams, and it looked like they were going to shake hands in a show of mutual respect. Instead, the hostilities resumed, with the Guns getting the final laugh, dropping Sabin with the Magic Killer. With the Guns down, the other teams all jaw-jacked at one another as the show came to an end. The match was good – the North do so much so well, and the Good Brothers know how to deliver a good match. The post-match stuff was good, though once again, Austin and Fulton didn’t get the focus that the other teams have gotten during the build-up for the match. Arguably, the Young-Swann segment should have ended the episode, since the World singles title should be the PPV main event, but with the inconclusive ending to that segment, it’s probably for the best they ended with this one.

After the show, they ran the special “Talk’n Shop: Full Keg with the Good Brothers”. The less said about this unfunny mess, the better. Even the usual comedy gold Johnny Swinger and Heath couldn’t make this watchable.

Three items of note coming from this:

The strong build for the PPV continued with this episode. The Sami-Eddie match was strong, and the tag team match also delivered. Nothing can save the debacle that has been the EC3-Moose storyline, so while this week’s stuff didn’t help, at least it didn’t make it worse. All in all, a good go-home show that accomplished what it needed to.