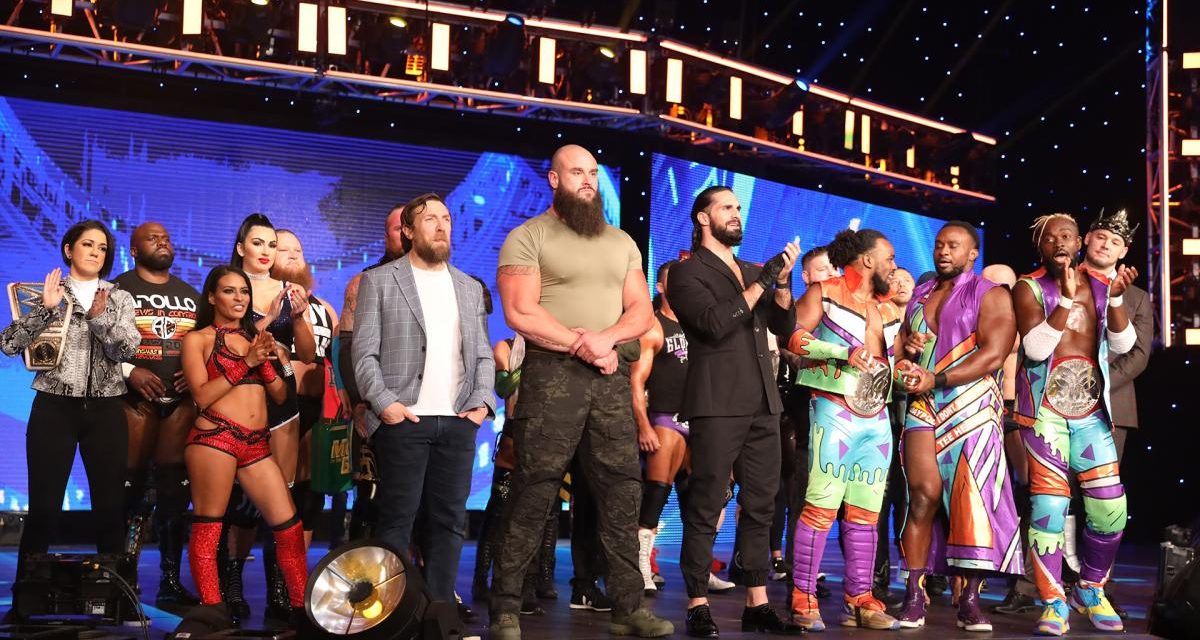 Featuring a match between Roman Reigns and Braun Strowman for the Universal Title, and a contract signing for Sasha Banks VS Bayley, this October 16th edition of SmackDown is the season premiere, whatever that means for a show that runs every week of the year.

To start off the show, Stephanie McMahon and Triple H announce the matches that are to come tonight to the SmackDown roster, who are assembled on the entrance ramp. Having all those bitter rivals in the same area turns out to be a bad idea, as a brawl breaks out. Eventually, Lars Sullivan comes out to clean house. Jeff Hardy, his opponent tonight, comes out and tosses him out of the ring.

Hardy goes for the legs immediately, but Lars blasts him with a clothesline. He tosses him hard into the corner, and slams him with a suplex and a sliding clothesline for 2. The Freak climbs to the top rope and goes for a diving headbutt, but Hardy gets out of the way. Hardy gets fired up, delivering a jawbreaker and an atomic drop. Before he can capitalize, Lars lands a clubbing blow to his back. Hardy fights back with Whisper in the Wind, but only gets a one count.

The Charismatic Enigma goes for the Twist of Fate, but Lars counters and tosses him out of the ring. Hardy goes for Poetry in Motion off the steps, but Lars catches him and slams him into the apron. When he gets back in, he’s met with a Twist of Fate. Hardy looks to go up for the Swanton Bomb, but Lars grabs him off the top rope and delivers the Freak Accident for the win. 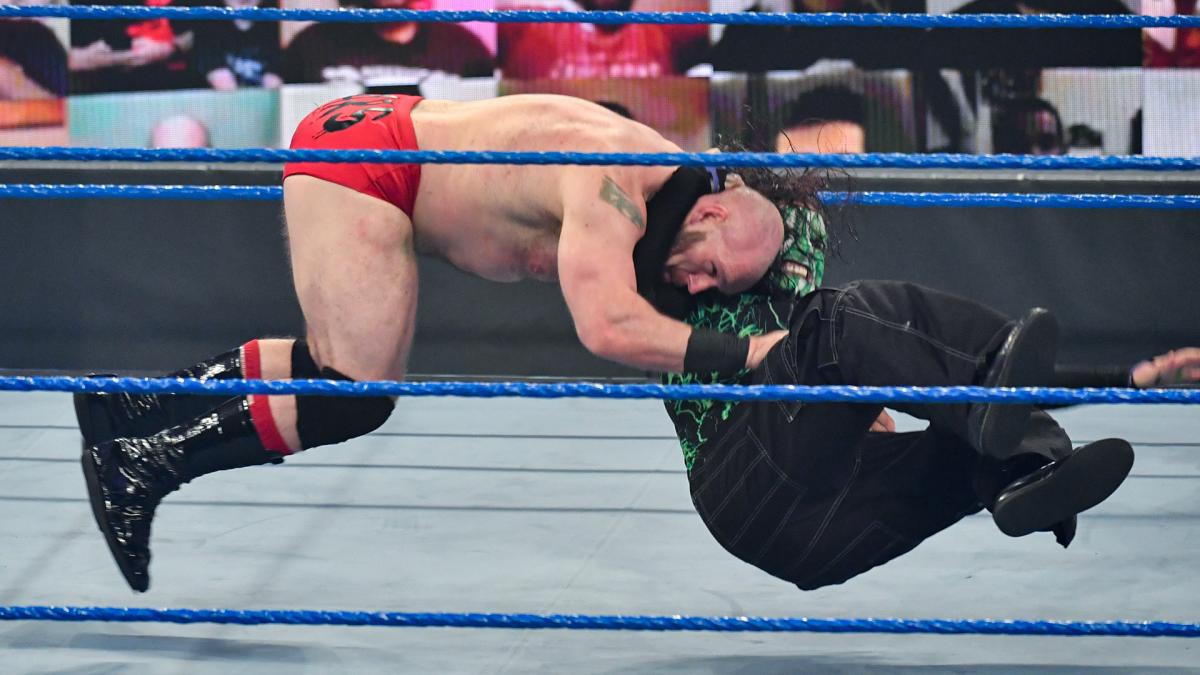 Before the match, the New Day takes some time to remember their favorite moments together, and all three get a little teary-eyed talking about how much they mean to each other. I’m not ashamed to say I got a little misty-eyed too. Their opponents get interviewed backstage, and they’re very excited to spoil the New Day’s happy goodbye.

Shinsuke Nakamura starts off against Xavier Woods, and Woods starts off by focusing on Shinsuke’s left arm.  He tags in Kofi who hits a mushroom stomp for 2. Kofi continues to focus on the arm, but Nakamura fights back with a knee and a kick. He tags in Cesaro and the two execute a double team clothesline. Cesaro slams Kofi with an uppercut and throws him to the opposite corner, but Kofi bounces off the turnbuckles and hits a dropkick. Kofi tags in Big E, who assists Kofi with a Senton. Big E tags in Woods, and he picks up Big E and drops him on Cesaro for 2.

Woods stings Cesaro with some chops, but Cesaro drops him with an uppercut. He tags in Sheamus, and they deliver a clothesline and a throwback taunt, yelling that they are the bar. Sheamus delivers a knee drop for 2, and then an uppercut of his own. He looks for a slam, but Woods fights back with a strike combo. He tags in Big E and then Kofi, and Big E powerbombs Woods onto Sheamus, and Kofi delivers a frog splash for a close 2. Kofi looks to go to the ropes, but Nakamura grabs his legs. Sheamus tags in Cesaro, who tags in Nakamura, and the three execute a combo on the outside, which results in a two count back in the ring.

Nakamura delivers Good Vibrations, and tags in Sheamus, who tags in Cesaro, and the two stomp down on Kofi. Kofi looks to fight back against Cesaro, but the Swiss Cyborg delivers a leg drop to Kofi. He tags in Sheamus and holds Kofi so Sheamus can deliver a solid kick to the gut. Sheamus tags in Nakamura, who tags in Cesaro, and the two both punish Kofi. Kofi fights back and looks to tag in, but Cesaro powers him back into his corner. He tags in Sheamus, who pulls Kofi off the top rope and onto the floor as we go to commercial.

When we come back, Kofi is rolling up Sheamus with a crucifix for 2 He delivers the S.O.S, and the two tag in Cesaro and Big E. Big E comes in and tosses Cesaro with some belly-to-belly suplexes, and then looks for the Big Ending, but Cesaro fights out of it and delivers a gutwrench suplex. He beats down Big E in E’s corner, which turns out to be a mistake, as he tags in Woods and they deliver their uranage-backstabber combo for 2.

Woods makes the same mistake Cesaro made, attacking him in his opponent’s corner, and Cesaro tags in Nakamura who delivers his sliding German suplex for 2. Nakamura stomps Woods down, but Woods tags in Kofi, who dives over the top rope to take out the former SmackDown Tag Team Champs. Sheamus takes out Big E in the ring, but Kofi delivers an enziguri. He brings Nakamura back in and looks for an attack off the top rope, but Nakamura catches him with a kick.

He tags in Cesaro, and they deliver their tag finisher, and Cesaro tags in Sheamus, and they do the same. Big E breaks up the following pin and takes out Cesaro with the Big Ending. Nakamura takes out Big E with a kick, and Woods takes out Nakamura with a missile dropkick. Sheamus tosses Woods out of the ring and looks to take out Kofi, but he tosses the Celtic Warrior into the post. Kofi tags in Big E, who tags in Woods, and the two deliver the Midnight Hour for the win. Very emotional win, I’m excited for the huge pop they’ll get when they eventually reunite. 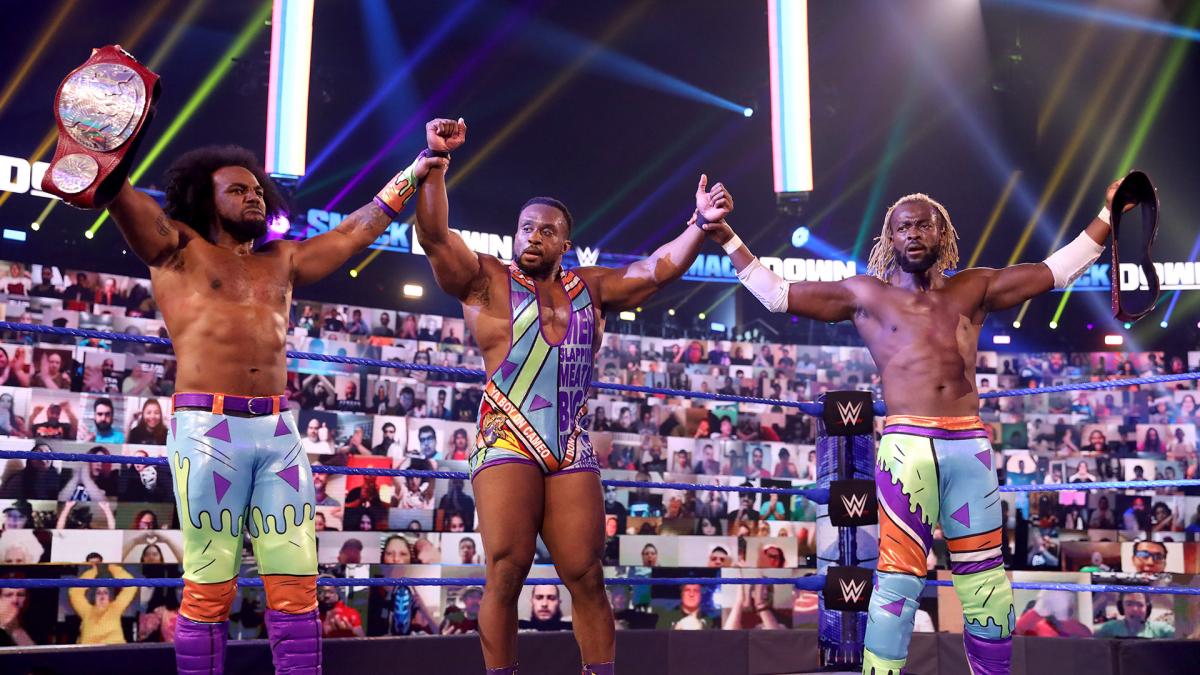 The New Day pose together for the last time in the foreseeable future. Photo: WWE

Backstage, Kayla Braxton interviews Otis about how he’s going to deal with The Miz’s lawsuit. Sami Zayn snidely says that without Tucker, he has no chance. Otis gets fed up with him and gives him a shove.

Daniel Bryan comes out, saying how excited he is to be on SmackDown and face its competitors, like Kevin Owens or Apollo Crews. He’s interrupted by Seth Rollins comes out, saying he’s happy that Brie let Bryan off “daddy duty” to be here tonight. He’s upset that Daniel didn’t name him as someone he’s excited about. Rollins asks him if he wants to help him shape the future of SmackDown, and Bryan less-then-politely declines his offer. Rollins attacks him, but Bryan reminds him who he’s up against with some Yes! Kicks. Rollins tries to leave, but he’s met by Rey and Dominik Mysterio. Buddy Murphy comes out and seems to be there to defend Rollins, but he attacks him instead. He offers a handshake to the Mysterios, but they decline.

Angelo Dawkins starts off against Dolph Ziggler, and Dawkins uses his power advantage early. He goes for his spinning splash, but Ziggler moves out of the way and tags in Roode. Roode comes in, stomps Dawkins down and delivers a suplex. Ziggler is tagged back in, and they deliver a double team leg drop.

Ford comes in, breaks up the pin, and unloads on the challengers. It devolves into enough of a brawl that the referee is forced to stop the match. They take out Ford, then deliver an amazing spinebuster-Zig-Zag combo. Ford climbs to the top rope behind them and jumps onto them with a jaw-droppingly high frog splash. 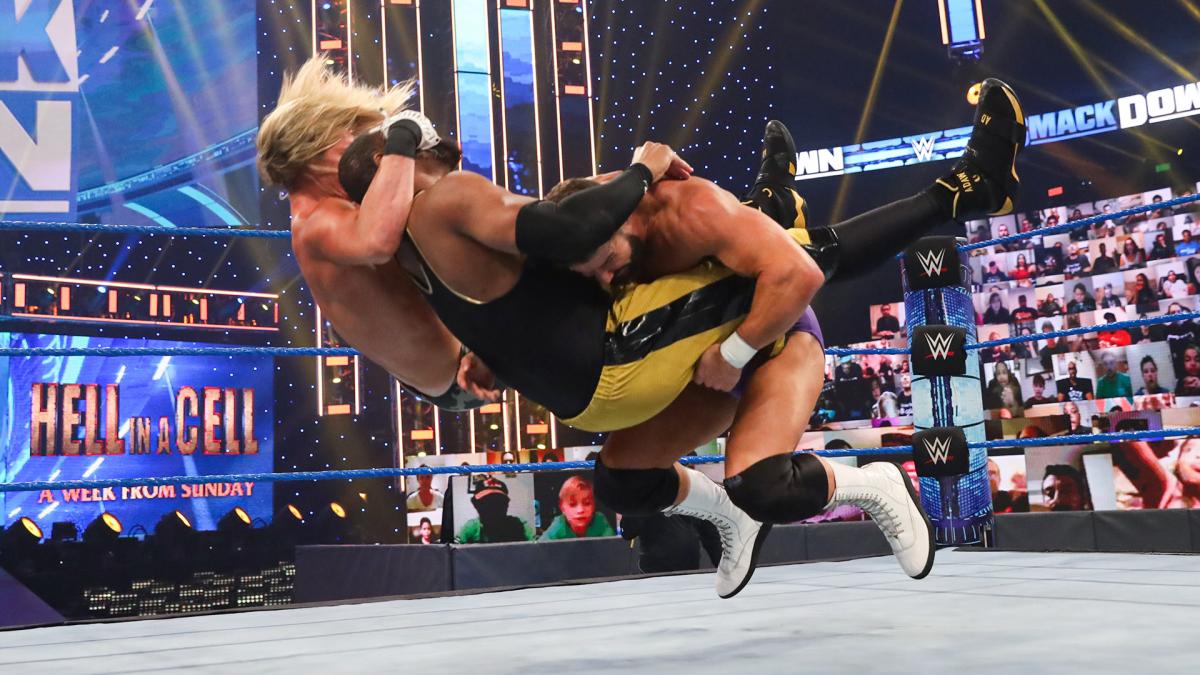 I swear, the Zig-Zag combos well with any move. Photo: WWE

Now it’s time for what will surely be a completely professional, respectful, and non-violent contract singing between Bayley and Sasha Banks. It’s obvious that Sasha isn’t as emotionally past Bayley as she pretends to be. She signs the contract, and then reminds Bayley that she helped her get her opportunities, and that the name Sasha Banks is bigger than her title. Bayley leaves without signing, and Sasha promises that she’ll sign it one way or another. 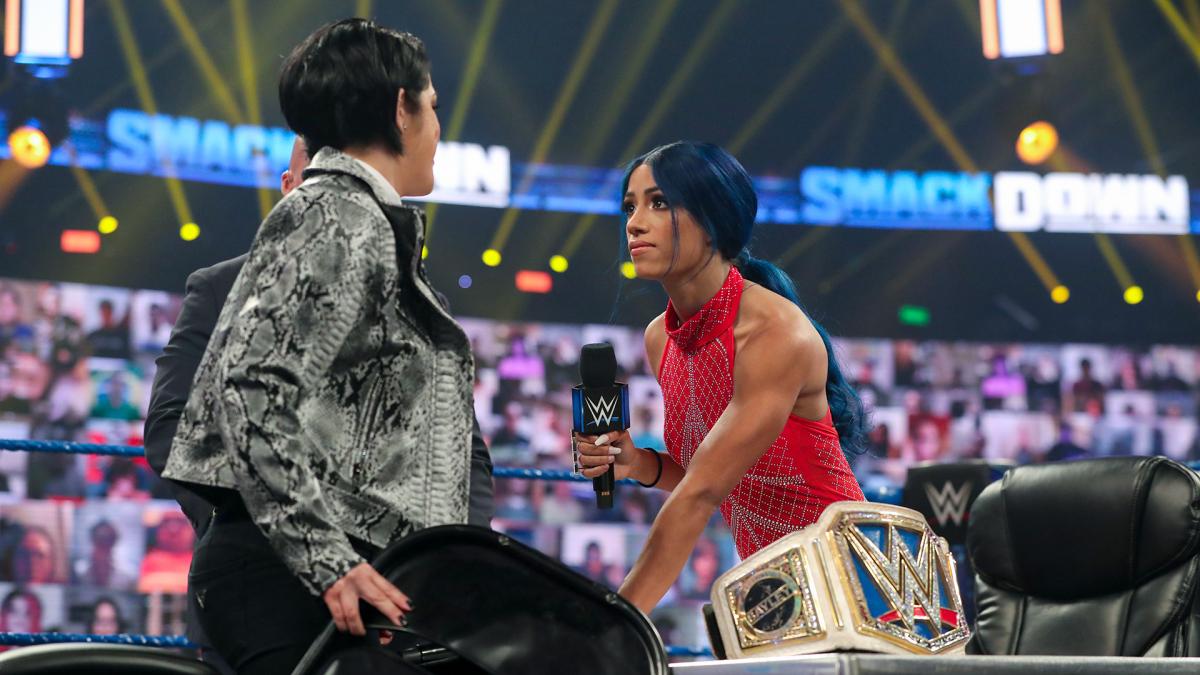 With Jey Uso watching on, the two lock up, with Strowman obviously getting the better of Roman in the power department. Roman uses Stroman’s momentum to toss him out of the ring, and then nails him with a Superman Punch when he tries to get back in.

He goes out to the floor as well, and hits his drive-by kick. He rolls Strowman back into the ring and pins him for one. Reigns lands hard blows to the Monster in the corner, but he gets tossed into a corner himself. Strowman looks for an attack in the corner, but Roman fights back with an uppercut and a big boot for 2. Reigns sends Strowman to the outside again and slams him into the steel steps. Strowman fights back and sends Reigns into the post and over the table. Strowman goes out, builds up steam, and body-checks Reigns over the barricade as we go to commercial.

When we come back, Strowman is delivering an avalanche, a Biel, and a heart punch for a close 2. He goes for another avalanche, but instead spears the ringpost. Reigns goes for a Superman Punch, but gets caught with a big slam and a chokeslam. Just like Clash of Champions, Roman low-blows Strowman as he kicks out. Roman delivers a spear, but only gets a 2 count. He looks for another, but Strowman picks him up for the powerslam. Roman fights out of it and then locks in a guillotine choke, and Braun taps out to it. 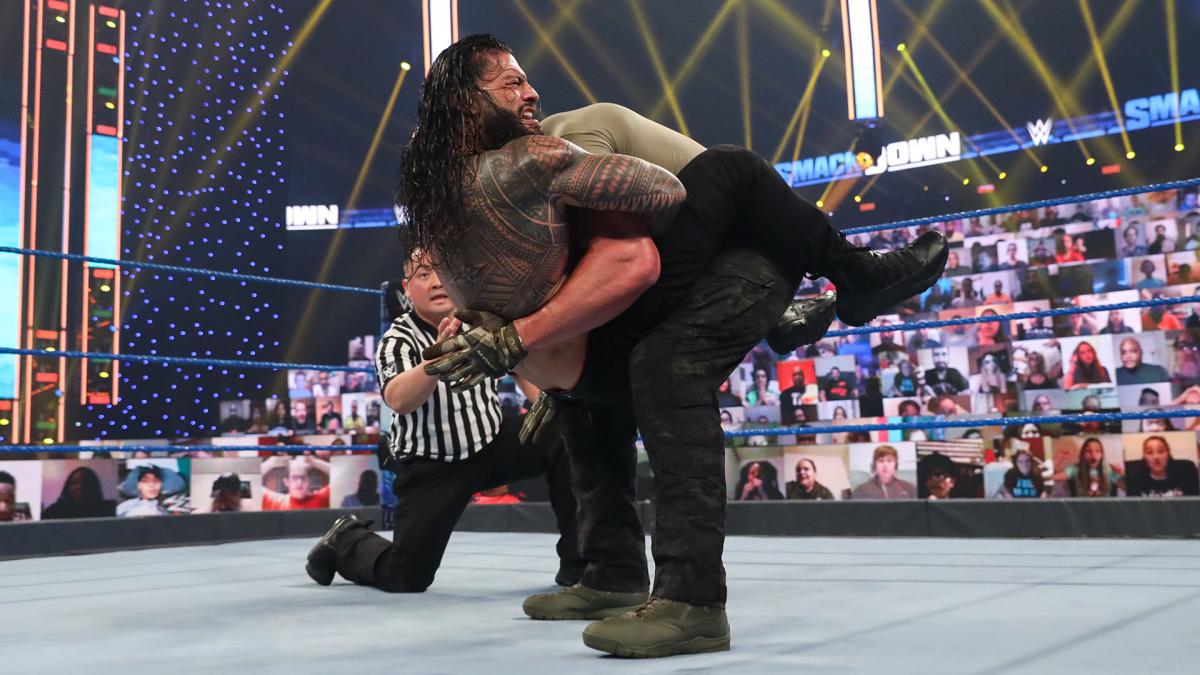 A rare picture of Roman Reigns using a move that’s not part of his 5-spoke wheelhouse. Photo: WWE

After the match, Jey Uso comes out. Reigns looks Jey straight in the eyes and spears Strowman again. He gets a chair and smashes Strowman with it, but Jey comes in to protect him I guess? Reigns offers the chair to Jey, which he refuses at first, but then superkicks Reigns and uses the chair on him. Reigns gets back up and lays Jey out with a Superman Punch.

Overall, a pretty good show, and the main event was surprisingly enjoyable. Maybe I enjoyed it because my expectations were so darn low. I also was more entertained by watching my dad play video games beside me than by the show, so take that as you will.