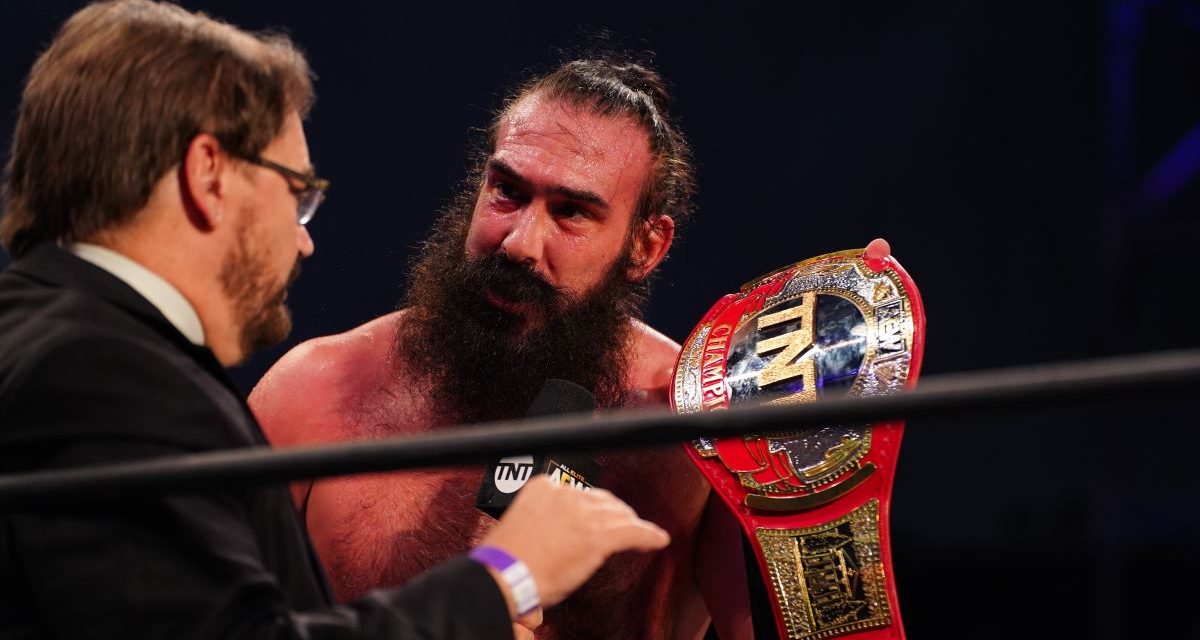 Hey there. Hope you remembered that Dynamite was on Saturday this week due to the NBA Playoffs. If not, that’s kind of what this report is for anyway. In any case, there’s a big TNT Championship showdown between Cody and Mr. Brodie Lee in store for us, as well as the final of the women’s tag team cup and several interesting tag team bouts. We’re starting with the first two teams in the ring already, so let’s get this going from Daily’s Place, live on TNT.

Just when it appeared FTR might be walking a bit of a tweener line in AEW, they showed their true colors last week by attacking Ricky Morton, and aligning themselves formally with Tully Blanchard seals the deal: These guys are heels. And they’re great in that role, so no qualms here. The announcers discuss how Blanchard’s approach was similarly no-frills and straightforward during his wrestling days, and he certainly doesn’t mind bending the rules ever so slightly when needed. His timely intervention allows his new clients to nail Marq Quen with the Goodnight Express to go to 6-0 in AEW.

Jon Moxley admits that MJF’s campaign is amusing and good TV, but he’s not bothered by it. Where he comes from, though, the toughest guys don’t have to talk so much, so Mox wonders what he’s hiding. Even as he hopes MJF does achieve his great potential and lead the company into the future someday, Sept. 5 will not be that day.

For his rebuttal, MJF compares Moxley to Genghis Khan but says the AEW Heavyweight Champion is worse. Mostly, it’s because of the Paradigm Shift, which MJF’s lawyer claims is a dangerous and potentially deadly move. After hilariously claiming that 5 million people have signed a petition to ban the Paradigm Shift, the lawyer says they want Mox to sign a contract agreeing not to use the move or face … a lawsuit. Excuse me for skepticism over whether Moxley would find that frightening.

Match 2 – Jurassic Express and The Natural Nightmares vs. Butcher & Blade and Lucha Brothers

The AEW Dark results show that Butcher & Blade and Lucha Brothers have already worked together as a four-man unit, so you’d think they would be on the same page. Not exactly. After a high-tempo bout, things get frayed on the heel side and Pentagon Jr. pushes Blade into a pin by Jungle Boy. So much for team chemistry.

Winners: Jurassic Express and The Natural Nightmares by pinfall

Eddie Kingston, peacemaker? Not what you’d expect, but he arrives to deliver a motivational speech to the squabbling members of the losing team, and it’s a good one. AEW could use some more factions, but the wink that Kingston gives the camera after gathering everyone together for a huddle/hug makes you wonder what game he might be playing.

Dr. Britt Baker offers free dental care for a year to Kip Sabian and Penelope Ford, but she wants something in return. Specifically, she wants them to help her with her Big Swole problem, even throwing in makeup services for a year from Reba to sweeten the pot. That’s enough to convince Ford.

Since an interview segment with Orange Cassidy probably isn’t going to have too many words in it, the arrival of Chris Jericho can only liven things up on the verbal front. The Demo God congratulates Cassidy for pinning him last week, albeit with some backhanded compliments thrown in, before turning the discussion to a rubber match. Not just any match, however, but a Mimosa Mayhem Match at All Out. Yes, that means you can win by pinfall, submission or throwing your opponent into an 80-gallon vat of mimosas, and the video explaining it is pretty funny. Cassidy accepts that challenge with his typical nonchalant half thumbs up, but Jericho summons the Inner Circle to beat up Orange and the Best Friends. The Inner Circle holds Cassidy upside down whole pouring multiple bottles of A Little Bit of the Bubbly on him, which seems like a waste of champagne to me.

One criticism I’ve seen in some circles about AEW Dynamite is that its top stars end up going life and death with guys they shouldn’t, making those stars look weak. This could be one of those times, except for the idea that being part of the Dark Order helps elevate the profile of wrestlers like 3, 4 and 5 — even as it strips them of their individual identities. I can see arguments for both sides, but it doesn’t help the Dark Order win this match.

Winners: The Elite by pinfall

After the bell, Omega really wants to powerbomb the losers onto the legs of a steel chair until he’s stopped by the Bucks. Taz approves of this attempted violence, so Kenny, what are you doing?

To determine who will face Omega and Hangman Adam Page for the tag belts at All Out, there’s going to be a gauntlet match next week. After confirming that Blanchard is indeed managing FTR, Page arrives to get an explanation for last week, and FTR smoothly turns it into a master class in messing with Hangman’s head. Segments like this make you think FTR must be extremely happy that they left WWE, where they rarely got into fun subplots.

Match 4 – Darby Allin vs. Will Hobbs

My son asks me if this is a squash match. Yes. Yes it is, J.T. Of course Allin’s shtick is that he takes a lot of abuse before he triumphs, and Hobbs is a big man, so this should work out swimmingly. Allin wins with a Coffin Drop after a few minutes of action.

Not content with just running Allin down verbally during his bout, Taz says he has a new member of his team also named Darby that he wants Allin to meet. It’s really Ricky Starks mocking Allin with face paint, turning his sarcastic impression into an assault with the help of Brain Cage. Stark tells Allin that he’s better in every way and doesn’t need paint to be someone. As always, a face with no friends is a sitting duck when outnumbered. So Allin gets his weekly quota of punishment received and all is right with the world.

Every now and then, something happens during the picture-in-picture bits, and this is one of those times. Matt Hardy interrupts Sammy Guevara during his cue card bit with a steel chair attack, turning the heat up on their continuing feud.

Feel like Hikaru Shida doesn’t have enough legitimate contenders? She might be getting it in the form of NWA World Women’s Champion Thunder Rosa. Someone is sure to say she copied Allin’s half-painted face, but the guess here is that she has been doing that for some time. Anyway, it’s great to see someone new and accomplished in the mix.

Viewers who only watch Dynamite and don’t follow AEW otherwise might be confused about this tournament, which has been referenced on the air on occasion but hasn’t had any matches on the flagship program until this final. You could make arguments for either team winning, but considering the way Diamante and Ivelisse were individually pushed on TV a few weeks ago, it’s probably even more logical that they get the victory. Enjoy that big trophy, ladies.

Winners: Diamante and Ivelisse by pinfall

The announcers make a big deal out of how concerned Arn Anderson looks before the bell rings, but he always looks like that. Except maybe his concern is warranted this time as Lee wins in very quick fashion.

Could a real life injury to Cody be part of the reason? It appears medical attention is being summoned even as Lee cuts an excited promo with Tony Schiavone. Cody is placed on a backboard and then onto a stretcher, and while he’s blinking and moving a little, he hasn’t moved his right arm very much. He does give a thumbs up with his left arm before Dark Order attacks and quickly subdues Arn Anderson. They then dump Cody off the stretcher, which fortunately means he almost certainly isn’t legitimately injured. A triumphant Lee poses over Cody before Rhodes comes to put her body in-between her husband and the heels, but Lee simply commands the one female member of the Dark Order to choke Brandi out. Lee dumps the shattered pieces of the old TNT title over the former champ as the show comes to a close. See you in five — don’t forget that Dynamite is on Thursday next week!

Even though there was no one standout match on this special Saturday edition of Dynamite, the card was solid throughout, even with the main event coming to an abrupt end. We’ll have to see how that plays out, but there was a good deal of effective storytelling to go with it, and All Out is quickly rounding into a show that should be very good indeed.