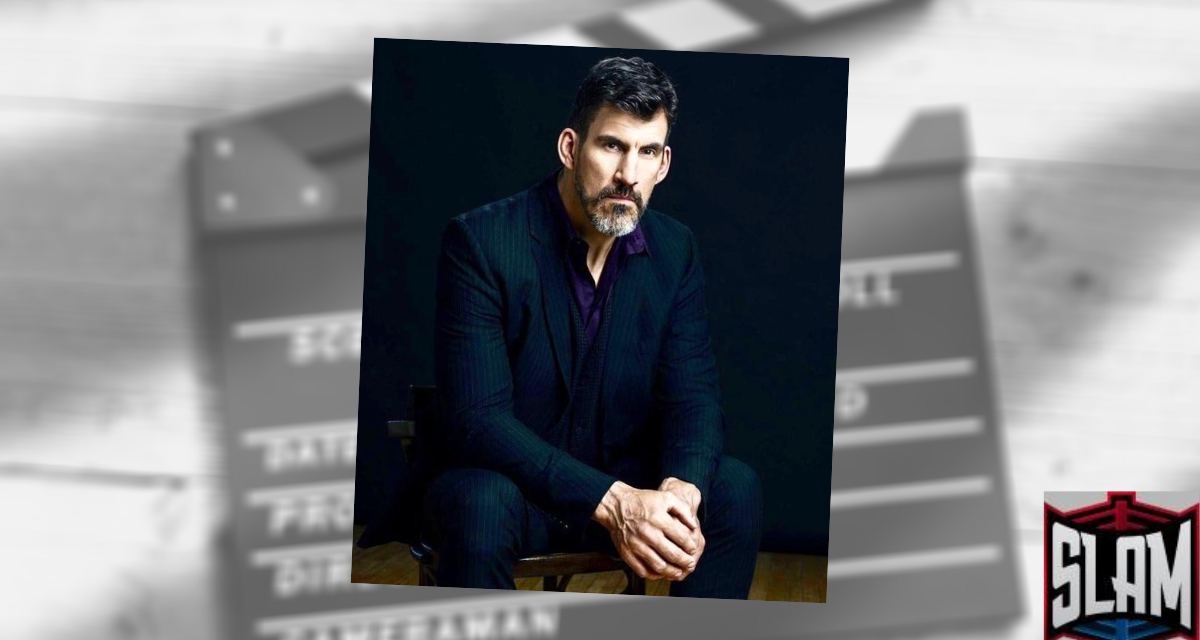 In 2019, as he wrapped up production on the independent horror film Becky in which he played the part of Apex, New Brunswick resident Robert Maillet eagerly looked forward to its premiere and the attention that it promised to bring to his performance. The unreleased film was already grabbing headlines for comedian Kevin James’ portrayal of a Neo-Nazi prison escapee, with Maillet serving at his right-hand man.

Unfortunately, as quarantines and lockdowns derailed much of normal life in 2020, the film’s premiere at the Tribeca Film Festival was shuttered and Maillet’s acting prospects for the remainder of the year, along with everyone else’s, were thrown into uncertainty. 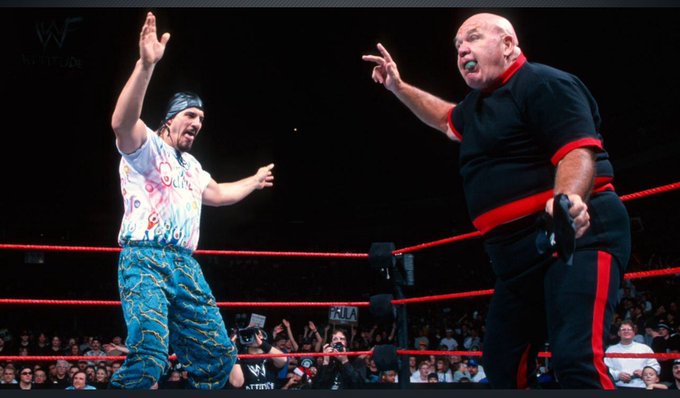 Maillet as Kurrgan while part of The Oddities, sharing the ring with George “The Animal” Steele. Photo: Twitter (@Robert_Maillet)

One thing that the quarantine has granted for many people, however, is time for reflection. With that in mind, Maillet spoke with Slam Wrestling about his transition from in-ring to on-screen performing, his favourite wrestling scene from a movie, and his wish-list of projects and actors to work with in the future.

To begin with, Maillet looks back to when his time as Kurrgan in the then-WWF was drawing to a close, and yet the idea of beginning a new career in acting was very far from his mind. “I understood that a lot of wrestlers were transitioning at the time to being actors,” he remembers. “I was focused on the wrestling. I just wanted to be a wrestler. I loved films and movies, but the idea of being an actor … it was so far away.”

All the same, when you measure 6’10’’, perhaps it’s hard to not be noticed by a business always looking for the next big thing. In one of those “stars aligned” moments, a friend of Maillet’s in-laws saw a live wrestling show and was struck by Kurrgan’s presence. The fact that this friend was Richard Collins, who had been a regular performer on the Canadian cult-classic Trailer Park Boys, meant that a door opened for Maillet to try something both brand-new and oddly familiar.

“I was like a fish out of water,” he laughs, remembering his first visit to a set. “The first gig was Lexx (a Canadian-German sci-fi series) shot in Halifax. But I was so used to the showbiz style of the WWF, it was very natural for me to be on set for a TV show.” He played the role of Leroy in one episode of Lexx in 2001, and for a while he wondered if that would be it.

“I was tired of losing out roles,” he admits. “I had to go to Halifax – a three-hour trip to do an audition – and it was frustrating to not get the part. Was it worth it to do the travel?”

Not long afterwards, though, the tides turned in a big way. Maillet received word from a production company that would be filming a movie in Montréal. They were seeking a big man for a role and they had sought the advice of Jacques Rougeau Jr. for someone who would fit the bill. Rougeau recommended Maillet.

However, what was about to be the breakout role for Maillet, truly launching him into the business, nearly didn’t happen because of a miscommunication. When the producers contacted Maillet, he recalls: “They didn’t really say who they were. I thought it was an indie film in Montreal, and I wasn’t interested.”

Luckily, Rougeau contacted Maillet to follow up, and Maillet learned that the mysterious production company was, in fact, Warner Brothers, and that the film was 300. “I thought I blew my chance,” he says, acknowledging his good fortune and debt to Rougeau. “The biggest break I had was 300. That started the ball rolling. I had a month of rehearsing for a big one-on-one fight scene with Gerald Butler. The film did very well, and I was very proud to be a part of that.”

Maillet is very candid about many of his early roles being physical and built for a big man like him. “Wrestling made me comfortable for fight scenes,” he explains. “For telling a story with your body, I could be Kurrgan in fight scenes and put my energy into it. I know my size, and I can play to that.”

He acknowledges that it took time for him to start seeking out roles with more dramatic layers to them. “Back then, maybe I didn’t have the confidence,” he recalls. “Acting from wrestling to film is completely different. Wrestling is over-the-top-like theatre, while film is minimal for the camera. You can’t make facial reactions like in wrestling. There’s a lot to learn about telling a story with your eyes.”

After 300 came an opportunity to work alongside Robert Downey, Jr. in Sherlock Holmes. The most famous story from Maillet’s work on that film was when a stage punch connected with Downey’s face – but a stage punch from Maillet is understandably solid. Downey has publicly acknowledged that it was an accident and held no hard feelings, and Maillet himself has only good memories from the filming experience. “That was another great part, and it’s all because of 300. It was the thrill of a lifetime to be working with those great actors.” 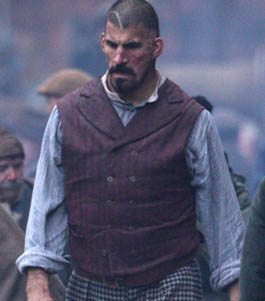 Maillet’s favourite part of his role in Sherlock Holmes was that it allowed his face to show up on screen, as opposed to the monster make-up he wore for 300. “There were five hours of make-up for 300,” he explains. “But in Holmes they see me, and more work came about from that.”

One of the acting jobs along the way that proved to be the most fun and natural for Maillet was in the American-Canadian production of Haven. The series was filmed primarily in Chester, Nova Scotia, only three hours from Maillet’s home. “I was able to bring my family down to Chester, a beautiful little town,” he says of one of the perks of the production. “It was a fun part. I played the heavy, and my name was Heavy.”

As luck would have it, another wrestler transitioning to acting had a recurring role on the series: Adam Copeland, with whom Maillet was very familiar from their turns as Edge and Kurrgan in the WWF. “It was the first time I hung out with him since I left the WWF a dozen years before,” he recalls. “Even with the time lapse, we didn’t lose a step. We always got along. We had travelled together, worked together, and he is such an easy guy to get along with.”

It would seem that fate kept playing its hand, as Maillet and Copeland’s characters were scripted to come to blows in the show. “We did a fight scene together, where he tackles me down, so of course it’s a spear,” Maillet laughs. The stunt team got to take a break for that day, Maillet remembers. “We told them just let us do our thing. We knew what we were doing and wouldn’t hurt ourselves.”

One added bonus of wrestling against Copeland on set instead of in the ring? “In Haven we had mats to land on!” Maillet remembers, laughing again. 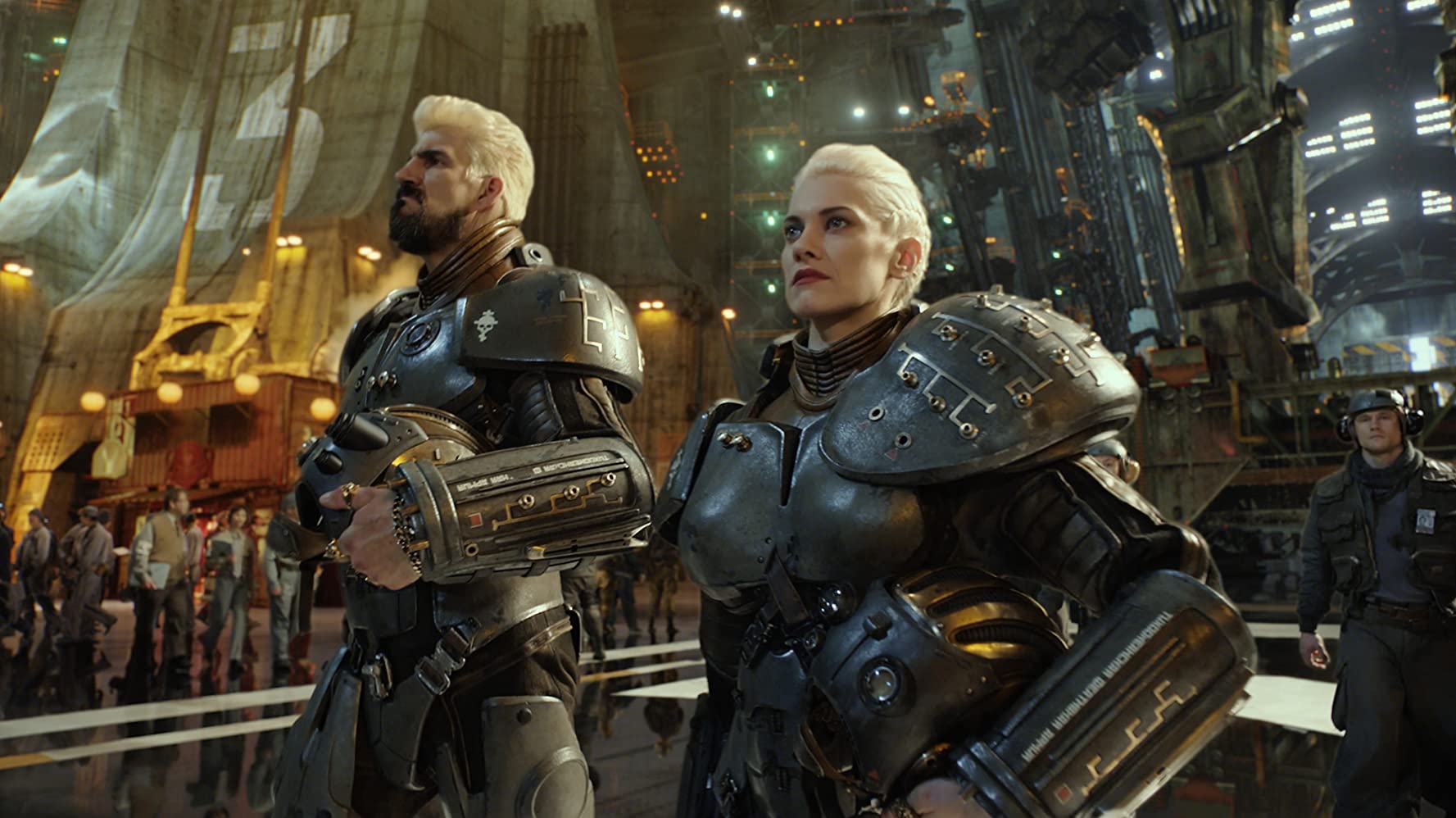 With a steady run of TV work such as The Strain and opportunities in big-budget feature films like Pacific Rim, Maillet has carved himself a dependable niche in acting. While he is truly appreciative of every opportunity he’s been given, he’s also ready for new challenges. “I’d like to get more great roles like Apex in Becky,” he admits. “I want more opportunities to play dramatic roles and show people that I can act and I’m not just a big guy. I love acting, I really do.”

Before his break in acting, and even long before his work in wrestling, Maillet was always fascinated with movies and art, foretelling his future endeavours. “I wanted to be an artist, I could draw, do caricatures, tell stories with a pencil,” he says. “I was a huge fan of comic books, but mostly Conan – more grounded stuff. No superpowers. I remember watching movies on VHS – sometimes three to four movies in one day. Of course I was a fan of wrestling, which is kind of an art as well, and I became an actor because of that.”

This appreciation of art as a fan is part of what Maillet considers to be his chief skill as a storyteller. “When I’m acting, or even wrestling, I’m always a fan,” he explains. “I understand the fan’s point of view, and I feel very fortunate that I can understand the audience’s point of view.”

When asked, Maillet’s wish-list of projects and co-stars sounds like it’s straight out of his youth and those days of movie marathons. Arnold Schwarzenegger is the first name to jump out. “I grew up watching his films, so he would be on the bucket list. I was in Deadpool 2 so I’ve done a Marvel film. I’d love to be in James Bond movies, Indiana Jones, even Star Wars.” Those are big wishes, but that’s where big realities come from.

Even with the unusual circumstances of 2020’s entertainment business, Maillet’s work is still popping up throughout the year. When season two of The Umbrella Academy arrived on Netflix at the end of July, there was Maillet playing the character “Lights Out Lubbock” in a fight scene against the powerful Luther Hargreeves.

Maillet gets his hands dirty in a fight scene with Hargreeves (Tom Hopper) in The Umbrella Academy. Photo: Netflix

Maillet’s enthusiasm for playing “big guy” parts such as Lubbock might lead back to one of his earliest exposures to wrestling. When asked specifically about wrestling scenes from movies and if any stand out from his youth, he has the answer right away: “Rocky III with Hulk Hogan,” he says. “That was one of my first impressions of pro wrestling. I was 12 or 13 years old, watching Atlantic Grand Prix Wrestling with my dad. Then Rocky III came out and Thunderlips (Hogan) is this huge monster. It made a great impression.”

Interestingly, Hogan has told the story of how he didn’t believe a note that was given to him saying that Stallone wanted him to play the part in the movie, so he nearly missed the chance until he discovered it was real. It mirrors the chance that Maillet nearly missed to be in 300, and it’s a lucky break that he fully appreciates.

“I would have never forgiven myself if I hadn’t made that call,” he says of following up with Warner Brothers and taking the role that would redefine his career. After 20 years in the film business, it’s only right to recognize what an important moment that was.

As for the possibilities that may lie ahead for next 20 years, things may be unpredictable right now due to COVID-19, but it’s safe to say that Robert Maillet is focused on taking advantage of every opportunity that presents itself.

History shows to not bet against him.