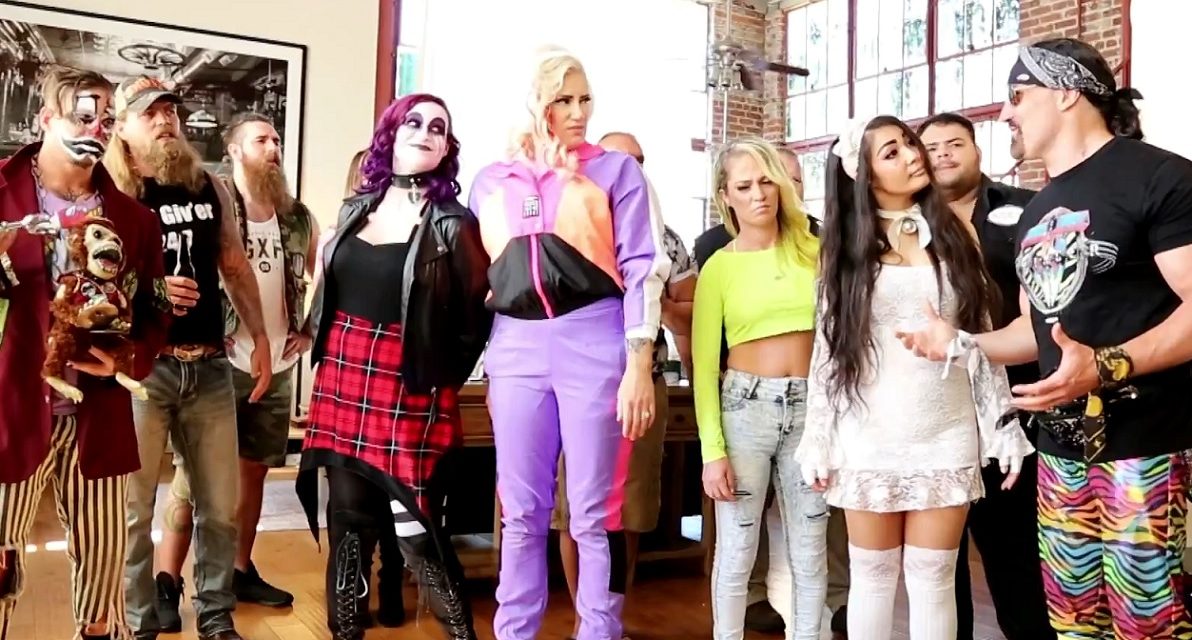 Somewhere, Jim Cornette’s head just exploded. That’s the thought that kept going through my head watching the many, many comedy segments that packed this week’s episode of Impact. And while the serious matches delivered for the most part, one can’t help but wonder if the pendulum swung just a bit too far toward the ha-ha’s this time around. Certainly some may think so. But, as the saying goes, if they don’t like it, they probably weren’t watching it anyway.

The two started off with a handshake in a show of respect. There was some good scientific wrestling to start and Trey was getting the upper hand, but Eddie used his strength to take control with a sweet overhead suplex and a spinning spinebuster. Trey came back with some dazzling quickness, hitting Eddie with a series of headkicks, but ate a pair of knees in a split-legged moonsault attempt. The two of them slugged it out in the middle of the ring, with Trey once again using his speed to take Eddie down for a near fall, and then another after a sweet reversal into a Tiger Driver. Eddie powered up, though, and hit his own Tiger Driver for a very close count. With Trey staggered, Eddie hit a Boston Knee Party to get the win. This was a good babyface match that let both of them shine, and really helped elevate Trey as a main-stage player.

After the match, Eric Young came out to the entrance stage, threatened Eddie, and left.

Next up came the debut of “Wrestle House”, a new feature that’s an over-the-top parody of cheesy reality shows. There were some pretty funny lines – a lot of fourth-wall breaking, some schlocky CGI, a few winks and clever callbacks to alumni and to other companies, and Tommy Dreamer dressed like a douchey reality show host. Overall, the opening segment was pretty funny.

The housemates scrambled around the house, racing to find one of the few bedrooms in the place. Crazzy Steve and Acey Romero started arguing over which one would get to sleep in the ring that was set up in the backyard, leading to a match, with the winner getting the ring.

After a bit of comedy, Acey Romero clamped on a sleeper, and Steve passed out. This went for about a minute.

Next came a lengthy series of backstage vignettes, promos, and video packages.

Yes, that was eight in a row. #Pacing

Purrazzo’s Knockouts Championship was not on the line for this one. Lee started off ferociously, sending Purrazzo to the floor in the opening seconds, and then stretching her out in the middle of the ring. Purrazzo was able to turn things around with a hard elbow stomp, and then targeted Lee’s arm. Lee fought back, though, and hit a couple of enziguris to slow down the champ. But a flurry by Deonna saw her take back control, and after a vicious arm-breaker, she locked on the armbar to get the submission victory. Good match with a simple story. Purrozza isn’t Tessa Blanchard by any measure, but her stuff looks good and she looks like she really wants to hurt her opponents.

After the match, Jordynne Grace stomped to the ring to confront Purrazzo. Though she was wearing a sling to the ring, she tore it off and attached Purrazzo, swarming her with punches, sending Purrazzo scrambling.

Backstage, Katie Forbes ran into Sami Callihan but confused him for a fan and told him that if he wanted to see her, he’d have to visit her website.

This was a short brawl that ended when Jake hit a short-arm Boss Man Slam to get the quick pin.

After the match, the feuding cousins made up. And later Cody found a tour bus to sleep in.

The Good Brothers physically dominated Thornstowe early on and it looked like it would be a quick one. Then Ace Austin came out to the entrance stage and sat down in a chair to take in the action, which caught the attention of Anderson, and with his back turned, Reno Scum capitalized. They double-teamed Anderson and cut off the ring to continue the punishment. Anderson was able to get the hot tag after a couple of minutes, and Gallows took over, leading to a quick Magic Killer and a win.

After the match, Austin charged the ring. The Good Brothers dared him to enter the ring, and with them looking his way, Mad Man Fulton sneak-attacked them and the two teams brawled around the arena. They fought their way to the back, into a backstage hallway, and finally out the exit door and outside the arena. The video feed got cut after a huge kick by Gallows sent Fulton crashing into the camera, apparently breaking it, and the screen went black to end the show.

While the comedy in the Wrestle House segments was top-notch, the rest of the comedy fell flat. And while the wrestling matches delivered – especially the matches featuring the champions –  they were too few and far-between that the show’s pacing really suffered.