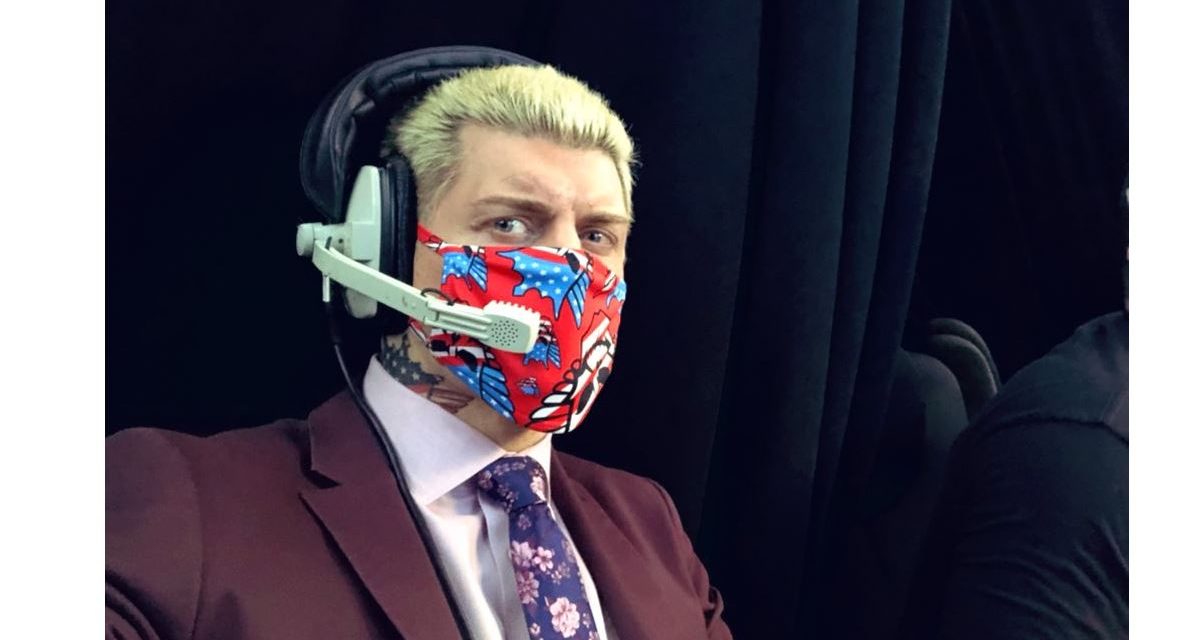 The media conference call on Thursday was ostensibly to promote AEW’s Double or Nothing pay-per-view on Saturday, May 23. However what the chat with Cody — the wrestler and the company executive — really was, was an exploration of the effects of COVID-19 on everything.

Sure there was a little talk about the card itself, but understandably, putting on a live shows during a global pandemic is unique.

Just to get to his office to do the call, Cody Rhodes said that he had to have his temperature taken in the parking lot, and then again in the hall by his office. And everyone gets tested.

The whole process of putting on shows — which Rhodes called “a bright spot for fans in these difficult times” — is complicated.

The wrestlers and the crew putting on the show are kept separated. Cody noted that the ring crew is “working overtime to sanitize” everything, not just the mats. The medical team, headed by Dr. Sampson, was noted too: “They have just been so above and beyond, and countless hours, making sure that everyone is genuinely tested.”

All in all, “it’s just been a really unique challenge.”

“Daily’s Place is incredibly special. It was already special for us, before the pandemic in a way as a home arena, obviously as the parking lot is where we had the initial AEW press conference,” began Cody. “For me, there’s a lot of tools in this sandbox, in terms of the space. It’s something that we’re so fortunate to have in Daily’s and its surrounding infrastructure. I just love the fact that the sun sets — just a personal aside — the sun sets as the show beginning and going on, and it’s a beautiful lighting treatment. One of our master lighting guys, Greg, I know it’s a pain for him, as he’s having to adjust. But I love that and I love the wind. Last night, watching Jake [Roberts] and Arn Anderson sermonize, and seeing the wind blow, to have that open-air amphitheatre that is Daily’s Place, it’s made things very easy for us. We have a lot of contingencies, a lot of places that as the world opens up that want AEW … but if we wrestled at Daily’s for the foreseeable future, I would have no problem with that. I can’t thank the Khan family enough for having it available for us to work and for us to work safely.”

Cody didn’t see AEW taping anywhere else in the short-term. The “plan right now is to stay in one spot” since it’s easier to control it all. He did mention that it’s gotten to the point where fans are now coming to the parking lot just to be around wrestling, and that Cody himself went out to acknowledge them last night.

He misses the fans.

“We very much miss the fans, we miss each other. There is a need as a wrestler for a fan. Hulk Hulking up. Every aspect of a really good wrestling match, and the psychology of it — it depends, and I know there are different flavours — but wrestling depends on the crowd, and on one another. So we’re now working for this crowd that’s at home and we’re hoping and we’re guessing and things of that nature. But mainly, the positive is just becoming a better performer and a better wrestler. But overall, I can’t say how much I miss it on a personal level, and I know the locker room misses it.”

There has been a learning curve as well. “There’s been an aspect of experimentation,” said Cody, and a “self-awareness” they all feel. “We’re evolving right in front of the audience.” An example is the microphone in the ring; they tried without it, since no fans were drowning out the promo, but it was still needed for the audio on television.

By peppering the crowd with wrestlers and those in the industry – properly socially distanced – the challenge is to get the “jaded” few at ringside to react. “The wrestler’s nightmare is silence,” he said.

Double or Nothing marks a year since AEW really began, and Cody, in his dual hats, is excited about it all.

He’s got a prominent spot, facing Lance Archer, with his manager Jake “The Snake” Roberts, for the new TNT Championship. The new title belt — “I haven’t seen it,” he swore – will be presented by boxing legend Mike Tyson.

Cody revealed that the AEW team met Tyson last year at Double or Nothing in Las Vegas. “He is a hardcore AEW fan,” Cody said. “It’s been fun to get to know Mike over the last year.”

When asked how different the actual card is from what was planned months ago, Cody said it was about 90% as planned, perhaps surprising given the arrival of new super-heavyweight talent like Archer, Matt Hardy, and Brodie Lee (the former Luke Harper in WWE).

The main event is Jon Moxley defending the AEW World Championship against Brodie Lee. “It’s very much a proving ground for someone like Mr. Lee,” said Cody, the wrestler. Cody, the executive, noted that Lee stepped up as a leader, since locker room is so young, and he values his contributions.

Other matches on the Double or Nothing show include: MJF (with Wardlow) vs. Jungle Boy; Darby Allin vs. Colt Cabana vs. Orange Cassidy vs. Rey Fenix vs. Scorpio Sky vs. Kip Sabian vs. Frankie Kazarian vs. Luchasaurus vs. TBA in a ladder match; Nyla Rose (c) vs. Hikaru Shida in a No DQ and No Countout match for the AEW Women’s World title; Dr. Britt Baker, D.M.D. vs. Kris Statlander; Private Party (Isiah Kassidy and Marq Quen) vs. Best Friends (Chuck Taylor and Trent); Matt Hardy, Adam Page, and The Elite (Kenny Omega, Matt Jackson and Nick Jackson) vs. The Inner Circle (Chris Jericho, Jake Hager, Sammy Guevara, Santana and Ortiz) in a Stadium Stampede match; and Dustin Rhodes vs. Shawn Spears.

There’s “such a diverse palette on this show,” said Cody. Though no one is eating at them these days, he said that it was “a buffet for wrestling” but they will “make sure it’s the best damn buffet there is.”