Smothers more than a ‘Wild Eyed Southern Boy’ in his autobiography

By ISABELLA FLAMMIA – For SlamWrestling

I’ll admit I had no prior knowledge of Tracy Smothers before reading his autobiography, but by the time I finished it, I learned everything I needed to know.

The book, If You Don’t Buy This Book Everybody Dies, written with John Cosper, follows Tracy’s journey as a wrestler from his early days in Tennessee to his most recent battle with cancer. A lot of his personality came through in this book and shows the type of person he is in and out of the ring.

Tracy Smothers has wrestled for most of his life and in all eras of wrestling from 1982-2017. He’s done it all from wrestling for every major promotion and becoming a trainer for WWF to fighting three bears — hence the cover and title — and being involved in a riot in Mexico. His biggest runs were in the NWA as half of the Wild Eyed Southern Boys and the Young Pistols, and then in ECW in the Full-Blooded Italians.

I found If You Don’t Buy This Book Everybody Dies to be an enjoyable read because having Smothers’ stories told through his perspective made it easy to tell what his emotions were at certain times. I liked that he didn’t hold back on any detail and was honest about the different wrestlers and promoters he knew. I recommend this book to every wrestling fan, even if they are unfamiliar with Smothers, as I was.

One takeaway was that he never wanted to intentionally hurt anyone, but if you wanted to bring the fight to Tracy Smothers, he wasn’t going to back down.

Another thing that stuck with him over the years in his wrestling career is his love for the business. From the stories told in this book, Smothers almost called it quits on multiple occasions but ultimately, his love for wrestling always overruled the hardships he had to face.

In an email interview with Cosper, he addressed Tracy’s passion for the business. “His love for the business is evident in his stories and in his life today. He’s restless and ready to get back out there.”

If you’ve seen one of Smothers’ matches or promos, he’s always looking for a way to have fun in the ring. He loves what he does and always wants to give his best performance, even to people who aren’t fans. 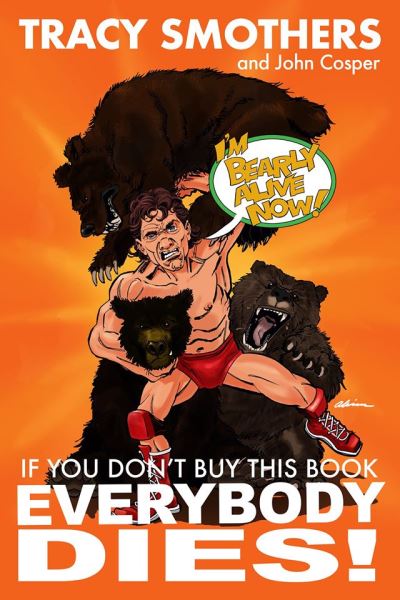 His most well-known gimmick is one that he used in multiple promotions where he carried the Confederate flag to the ring, but as a rebel flag. Tracy always reassured the crowd it was just part of his gimmick and he doesn’t support anything related to the Confederates.

“Tracy and Steve Armstrong were given the gimmick in a time and place where two young guys with Confederate uniforms would be seen as babyfaces,” explained Cosper. “Tracy still uses the Confederate gimmick to work heel in the northern states, and he draws a lot of heat with it. When he’s down south, he swaps out the Confederate gear for his ECW Full Blooded Italian gear and draws a ton of heat with that gimmick.”

From his stories, it is obvious Smothers loved being heel and really embraced the role. He knows how to get a reaction from the crowd and rile them up. Although wrestling has had a shift in style over the years, one thing that stayed the same is a wrestler’s ability to get over with the crowd.

“The style is much faster and more high flying than it was in Tracy’s heyday, but the psychology of working a crowd has not changed all that much,” said Cosper. “Not every wrestler has that skill, but the ones that do really stand out. To this day, he’s one of the absolute best at drawing heat.”

Aside from playing a heel and having heat with the fans, the type of person Smothers really is shines through in the book. He respected everyone, even people who didn’t like him, and always did the right thing. A lot of wrestlers back then didn’t have the same mindset as him and even today some still don’t because they want to look out for themselves. Smothers had everyone’s back no matter what because he always had a positive attitude and it didn’t matter where he was on the card or who he was wrestling; Tracy Smothers just wanted to wrestle.

He tells stories of when he took on younger wrestlers, where he was always more than happy to put them over and give them advice if they wanted it. He always put them first, even before his own career in some cases. Smothers looked out for them and it says a lot about his character; most guys back then wouldn’t give them a second thought, let alone be fine with putting them over.
“I think it’s wonderful. More than that, I am glad to see so many wrestlers have embraced him as the voice of wisdom,” said Cosper. “Anyone who approaches him and asks for a match critique will get it, and it’s always very encouraging and positive. Tracy may have more ‘kids’ in this business than any trainer of the last 20 years. Just the other day I met a wrestler on Facebook from the east coast who has called Tracy ‘Dad’ for 22 years.”

Smothers touched the lives of every young wrestler who sought advice from him and they looked up to him as a father figure. He wanted the best for them and provided them with encouragement instead of criticism to build them up. He had a lot to offer to anyone who wanted to listen and has shaped the careers of many young wrestlers.

He wrestled until 2017, where his health would just not allow him to continue. Last year, Tracy announced his battle with cancer to the public, after keeping it to himself for so long. Tracy had a lasting impression on everyone who knew him and all of his friends came together to help him out during this tough time — check out the fundraiser organized by NXT star Kassius Ohno (formerly Chris Hero), for one.

Cosper provided an update on Smothers’ health, “So far, so good. He’s been hospitalized 10 times since October. Six of those were week long rounds of chemo, but four have been for complications related to chemo. He’s laid low and self-isolated as much as possible since the outbreak.”

Although Smothers has had a lengthy career, it’s not over yet. “He misses the ring, he misses the road and he misses his fans. He likely won’t be cleared to take a bump for at least a year, but as soon as he’s able, he’ll be at ringside with a mic in his hand firing up the fans somewhere.”

If You Don’t Buy This Book Everybody Dies has great lessons for everyone to take away, like treating everyone with respect, never give up — and don’t mess with Tracy Smothers.