Jordynne Grace is the new Impact Knockouts champion, and is more than happy to talk about it. There were no tears on the conference call on Wednesday, though, just happiness.

For those who saw her win over Taya Valkyrie, which aired on February 11, but happened on January 18 in Mexico, those tears in the ring were real.

“It’s really just been a dream come true. I’ve been wrestling for 10 years now, and I just think this is the culmination of all my hard work,” Grace explained to the wrestling media. “I got really emotional there. It was awesome. It was really cool to be able to soak in that moment and to just think about how far I’ve come since the very beginning.” 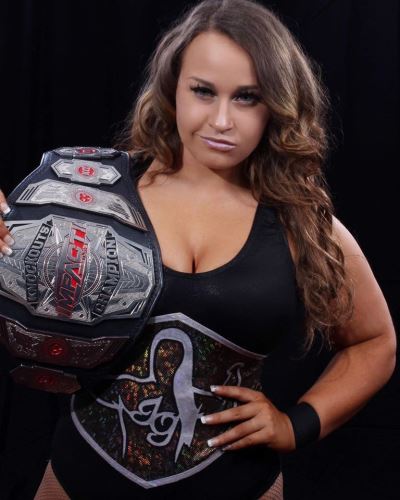 As the referee handed her the title, she found herself “thinking about my childhood and how much I sacrificed.”

Patricia “Trish” Parker, from Austin, Texas, worked her way to the title spot, both with in-ring skills, but also with her time in the gym (Wednesday was leg day). She’s been seriously into weights for a dozen years, longer than she has been wrestling. And she’s only 23.

The 5-foot-3 powerhouse declined to accept another title, that of the strongest person in the Impact locker room. “I’m definitely not the most powerful person, especially when you’ve got guys like Mike Elgin in there, but maybe being the strongest Knockout is pretty awesome.”

Grace talked a little about the journey, framed by how women are treated differently in pro wrestling today compared to even a decade ago.

“In Texas, wrestling took forever to evolve,” she began. “When I first started, there was, as with most places, one women’s match on the card. But the way that women were treated, especially where I’m originally from, was just horrible, and when I first started wrestling, I was treated kind of that same way, and I don’t know if it’s because I’ve grown my name a little bit or because women are more respected in general, but when the #MeToo movement happened, everything in wrestling kind of changed with the women. That movement affected everything, wrestling included, and you saw just a drastic change in how we were all treated.”

Finding female opponents on a regular basis was not easy when she started either, so Grace has no problem with intergender wrestling, which she has done in Impact and elsewhere. “I’ve always done it, since from the very beginning of my career, so it’s nothing new, it’s not a novelty to me, it’s just wrestling to me.”

That is an easy lead-in to the current Impact World champion, Tessa Blanchard, who beat Sami Callihan for the title. Could there be a battle between the two champs?

“I feel like right now I just am going to focus on what I have and what I need to keep,” she said. “I feel like if I lose focus and I think about the World title or I think about the X Division title, or anything like that, then I’m going to get distracted, and I just want to be focused on one thing right now, and that’s keeping the Knockouts title.”

But don’t get the impression that she doesn’t respect the former champ, who held the Knockouts title longer than anyone in history, 377 days. “Taya is an amazing wrestler and I think at the end of the day, she did deserve that title, because she would just do anything she could to keep it. At the end of the day, her tricks kind of ran out there.”

The plan is to keep the title. “I sure hope to have a reign at least as long as she did, but I think, at the end of the day, if I’m taking on anybody that comes my way, there’s bound to be someone better than me out there, right?”

Recent Impact signee Tenille Dashwood is on her radar, calling her “the biggest threat to the title.”

“She’s kind of more known, she’s been wrestling a long time, she hasn’t ever won the Knockouts title before. I think she’ll want to fight for it more than anybody else,” said Grace.

There are plenty of people who helped Grace along the way. Behind the scenes on Impact, former Knockouts champion Gail Kim is one of the agents for the division. Grace said that Kim is “incredible” and explained why. “What else can I say about Gail? She’s one of the main reasons that I have the Knockouts title in the first place, because after every match she gave me just amazing advice each and every time. She’s one of the reasons, like I said, I am where I am, and I think with her coaching and her mentorship I’ve developed so much as a wrestler in terms of just showing emotion in the ring and doing certain things in the ring that I might not have done before.”

The entire history of the TNA/Impact women’s division was one factor in Grace signing with Impact. “That is one of the big reasons that I signed with Impact in the first place, is because they put so much attention and they dedicate so much time and effort into their women’s division. I had the opportunity to sign with a lot of other different companies a couple of years ago, or a year and a half ago, and I decided to stick with Impact, because I knew that I would be special there, as opposed to kind of just being a small fish in a big pond any other place.”

And now, with her title win, Grace is one of the big fish.