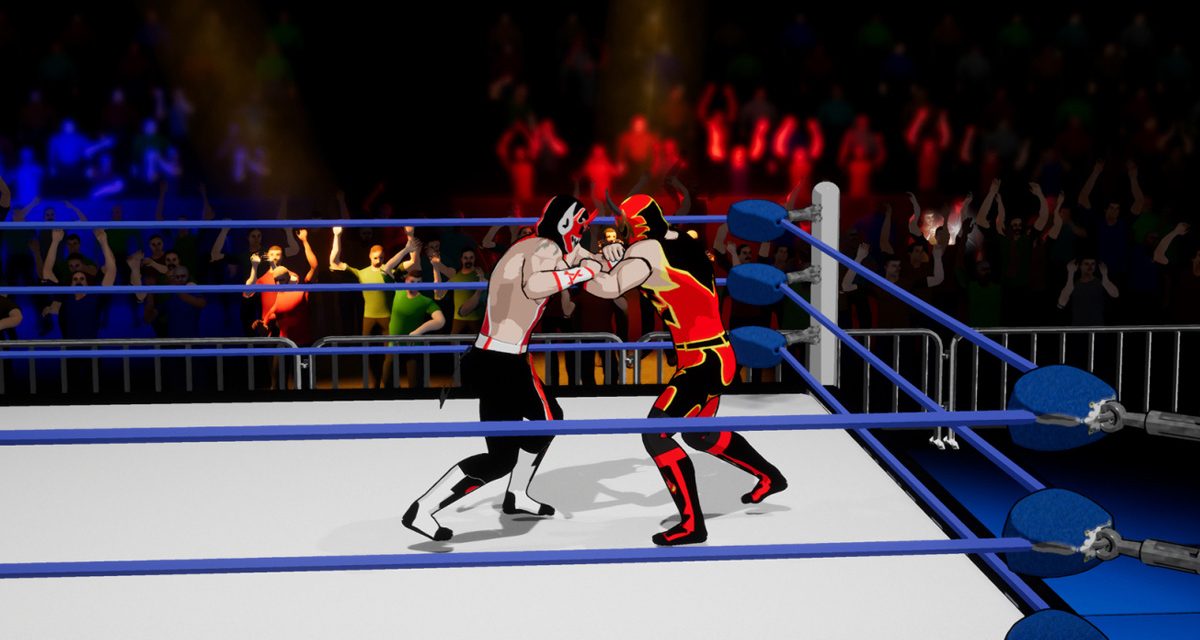 You may have seen or heard of an Indiegogo campaign led by David Horn, producer of Chikara: Action Arcade Wrestling (CAAW), looking to create a throwback-style wrestling game. Having exceeded the target of $33,000 dollars, the game is now ready for release on Steam on October 8th. As of this writing, PS4 and Xbox One release dates are still forthcoming.

The creators of CAAW are relying on a certain nostalgic pull for gamers, and they had me at “Hello” when they cited “Saturday Night Slam Masters” as a source of inspiration. “Slam Masters” was a game that I played on Super Nintendo, and it was, for all intents and purposes, Street Fighter in a wrestling ring (that’s agood thing, by the way).

The CAAW team also mentions another game on which to model their action: WrestleFest, an arcade game for the then World Wrestling Federation that took an awful lot of quarters from me in my youth.

It’s against this backdrop that CAAW arrives, a fluid fighting game with a stylish 3-D animation, featuring the over-the-top antics and characters that come with Chikara naturally, plus the cartoonish wrestling style of the above-mentioned video games. It is a powerful combination. On the project’s Indiegogo page, Horn claims not be looking to supplant the powerhouse and longrunning WWE 2K series, but merely wants to provide an alternative.

As mentioned, not everything worked smoothly for me. The game would sometimes lose functionality in the menus, forcing me to close it from the Task Manager. The gameplay itself features some inconsistencies in the animation (strikes that don’t actually seem to hit anybody, but still cause damage), but it’s nothing you won’t find in the WWE 2K games that routinely find wrestlers phasing through the ring and each other. The on-line play was not functioning for me, but I’m going to chalk that one up to the game not having been released past the Beta-stage.

I meant what I wrote in the beginning, though: hopefully these are standard “baby step” bugs that are going to get ironed out,
because what was working was outstanding. There are a good number of play modes, from one-on-one matches all the way through to ten-wrestler Battle Royales. The
commentary is sparse, which is reminiscent, again, of early 1990s sports games in general (think of NBA Hang-Time, for example).’

The movesets are varied, and are pretty easy to pick up for a quick fight, with plenty of room to become a master tactician if you so desire.

That’s referring to standard wrestling movesets, by the way. For something more than a dropkick or an RKO, there are a couple of weapons you can pick up if you so desire. The choices are slim: chair, bat, and bat with barbed wire (which, when I played, was missing the barbed wire). I must say, though, I’ve never before been sickened in a wrestling game quite like when I used the bat to the accompanying sound of a classic “bat crack” effect.

Finally, beyond moves and weapons, there are the power-ups and otherworldly attacks. At random points during the match, powerups such as healing and increased speed with appear and lay on the mat to be picked up. Sometimes you can even knock one out of an opponent and take it from them. There are also some attacks that have nothing to do with wrestling reality, like this still below from me as Razerhawk hitting Frightmare with a Cyclopsstyle energy beam right in his face. Just don’t ask me how I did it; it’ll take some practice to get it down.

If you’ve been a fan of wrestling games from at least the mid-’90s, you’ll also know that a mainstay feature has always been wrestler creation, and CAAW has something for that, too. Alongside the game is a companion app called the CAAW Wrestle Factory. In here you can build wrestlers, arenas, and belts. It’s fairly standard fare, and you’ll have to create an account to upload your characters to then use them in on-line play (and, it seems, possibly off-line as well).

The highlight feature is a PNG-wrap that allows you to use an image from your computer as a full body wrap around your character. That’s what led to the creation of this future champion using a SLAM! Wrestling banner: The SLAM! Beast! Keep an eye out for him in on-line battles.

So, the recommendation here is to either give this game some time to work out the kinks, then invite some friends over to really play like it used to be — in person. If, however, you can live with the process of letting the game developers fix the issues as you learn the ropes, then there’s no reason to wait. One way or the other, this game does exactly what it sought to do: fill the niche market that more realistic wrestling games leave open.