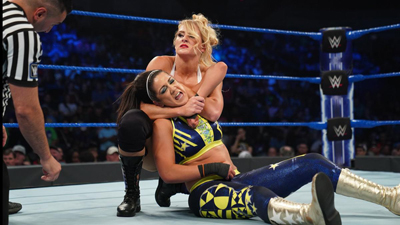 As many had already suspected, the altercation between WWE superstar Lacey Evans and an RCMP police officer over the weekend was a work.

Evans set the record straight in a Twitter statement today.

“As a prior law enforcement myself and a United States Marine, I do not condone agree with or promote disrespecting or making LEO’s jobs harder than they already are. The video was created by both parties to promoted the local live event taking place in the Edmonton area. As a sports entertainer, it’s my job to not only entertain but also set the proper example. So with that being said…I’m glad you all were entertained but if you ever try to honestly disrespect or put my brothers and sisters in blue in harm…I hope you get what you ask for,” she wrote.

Evans signed the Tweet with her real name and military title, Sgt. Estrella.

Before taking on the role of Evans in the WWE, Macey Estrella-Kadlec served five years as a U.S. military police officer with the Special Reaction Team.

Yesterday, Evans posted a video on her Twitter account showing her arguing with an RCMP police officer over a speeding ticket in which she called Canada and its people ‘terrible’.