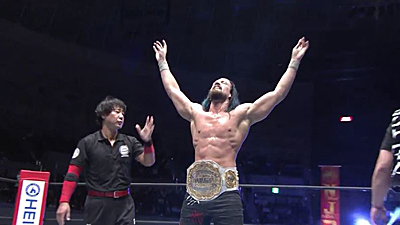 Nagata and Nakanishi started off the match with shoulder blocks and kicks to each other. Uemura shot in on Richards to take him down and dominated him on the mat. Nagata repeatedly kicked Nakanishi and whipped him into the turnbuckle. However, Nakanishi delivered a clothesline to ground Nagata. Tsuji locked in a Boston Crab on Coughlin to win.

Narita shot in for a take down. Narita applied a leg lock on the ground. However, Connors put Narita in an armbar. The pace of the match quicken with both wrestlers exchanging amateur wrestling moves. Both men exchanged many chops and then Narita delivered a dropkick to gain the advantage in the match. Connors locked on a Boston Crab on Narita who tapped out.

The match started very fast with both men exchanging moves. Fredericks eventually applied a headlock to slow down the match. Fredericks was shot into the ropes and the pace of the match picked up again. Fredericks dropped an elbow on Umino for a near three count. Umino went to the top rope and hit a missile dropkick for a near fall. Fredericks locked in a Boston Crab to win the match and the Young Lion’s Cup. It’s interesting that the Boston Crab was the finish in the first three matches.

Takahashi and Henare kicked off the match and exchanged shoulder tackles and chops. Bad Luck Fale stood on Honma’s back. Fale proceeded to whip Honma into the corner. Fale and Makabe double clotheslined each other many times and then Fale delivered a hard clothesline that put Makabe down. Henare cleaned house on the Bullet Club with multiple clotheslines. Owens hit the Jewel Heist on Henare for a near fall and then followed up with a package piledriver for the win.

Liger attacked Suzuki as he was walking to the ring and everyone else for the match came out and brawled outside of the ring. Suzuki grabbed a table and set it up in the corner of the ring. Suzuki hit Liger with a chair so hard that the seat flew off. Liger removed his mask to reveal Kishin Liger, the dark version of Jushin Thunder Liger. Kishin Liger spit mist into Suzuki’s eyes. Liger ran after Suzuki with a spike. The referee threw out the match and declared Suzuki-gun the winners.

The crowd was split between SANADA and Okada. Both men went to different sides of the ring to get the crowd behind them. SANADA attempted to dive over the top rope onto Okada. Okada ran out of the way and the crowd was solidly behind SANADA. EVIL and BUSHI worked over Eagles in their own corner. SANADA locked in the paradise lock on Eagles and released it with a dropkick. Okada hit a dropkick on SANADA and attempted to follow up with a tombstone but SANADA tried to apply the Skull End. However, Ibushi broke it up and delivered kicks. SANADA locked in the Skull End on Eagles who tapped out.

A hard collar and elbow lock up started the match off. The pace quickly picked up and both men attempted the GTR but neither man was able to deliver it. They brawled outside of the ring and Goto was almost counted out. However, Shingo rolled Goto into the ring to break the count. Goto superplex Shingo off the top rope. Both men delivered big clotheslines to each other with neither man going down. Goto hit a very hard clothesline to put Shingo down. Shingo hit Made in Japan out of nowhere for a near fall. Goto hit the GTR for the win over Shingo.

When the bell rang the crowd chanted Naito and White went to the outside of the ring before they could touch each other. When White returned to the ring, Naito went to the outside and the crowd cheered. Naito delivered many elbows to White’s jaw. White dragged Naito out of the ring and whipped him into the barricade. White returned to the ring and Naito was almost counted out. Naito tied White up and insultingly slapped and mocked him. White got to the rope to force a break.

Naito spit in White’s face and White was able to deliver a series of suplexes. Naito got tied up in the ropes and White hit a draping DDT for a near fall. White hit a death lift German suplex and mocked Naito as an intercontinental champion. Naito hit a desperation kick on White when Naito was on the ropes. Naito followed it up with a spine buster and both men recovered while lying on the mat. White hit the Blade Runner on Naito to become the new IWGP intercontinental champion.

After the match the crowd started clearing out and White asked the crowd “where are you going? Did you actually think Naito would win?” Hirooki Goto came down to the ring and destroyed White. Goto said “I don’t plan on losing to that SOB”. It looks like White’s first challenger for his title will be Goto.