Hey, did you know the WWE is producing an all-women’s pay-per-view? It is called Evolution and will air on October 28th from Nassau Veterans Memorial Coliseum. It will feature women from Raw, Smackdown and NXT. 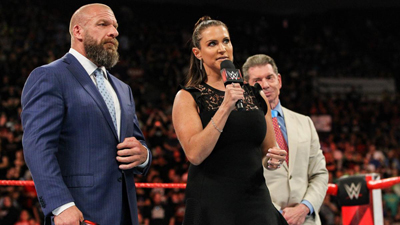 As a WWE viewer you had to have heard the news. Not only did Chief Brand Officer, Stephanie McMahon, make the announcement on Raw, it was replayed 3 million times and we had all those stilted, awkward segments in which a host of WWE superstars mentioned it over and over again ad nauseam. 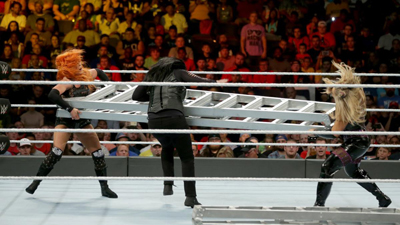 The ladder comes into play during the first ever women’s Money in the Bank match. Photo: WWE.

We got it the first time, WWE. We really, really did.

Don’t get me wrong. The Evolution show is a great decision and the women of the WWE who deserve better angles, more airtime not more meaningless tag team matches, will put on the show of their lives. Whenever they have been asked to step up they have done so. That is how dedicated, talented and hard-working those women are. Don’t take my word for it. The proof you need is right there in the ring and televised Monday, Tuesday and Wednesday nights.

What is kinda galling though is the WWE is taking credit for correcting a situation they themselves and their bookers caused in the first place. Seeing Vince McMahon standing beside Stephanie taking some kind of credit for righting the good ship WWE’s path was absurd considering he is the one who signed off on all of those bra and panties, mud wrestling matches in the Attitude Era.

And Stephanie, well, she was a willing participant in all of that nonsense from mud wrestling to a Love Her Or Leave Her Match, to The Undertaker, HHH, Kane and the entire WWE locker room kidnapping her at one time or another. Let’s also not forget the love triangle between her Triple H and Kurt Angle. 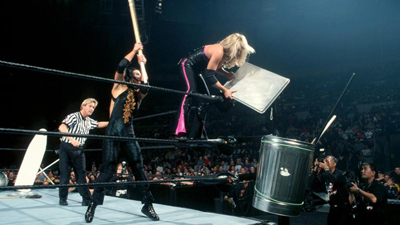 Stephanie talks a lot about glass ceilings and obstacles in the growth of the women’s division. What she fails to do is give context and history. The history and context being that her father, the bookers and her family are responsible for those circumstances to begin with. They own the company, they set policy, they book the matches and storylines.

The WWE shouldn’t be patting themselves on the back for a job well done, correcting their own mistakes. They should be kicking themselves in the ass for being so short-sighted to begin with.

It is nice to see the WWE catch up with the rest of the wrestling world though. There have been women’s professional wrestling promotions in North America since the eighties like Shine and Shimmer and many of them have ran their own pay-per-views. Impact Wrestling has been airing such pay-per-views since like 2013.

Japan has been light years ahead of North American when it comes to women’s wrestling. It all began with All Japan Women’s Pro-Wrestling which ran from 1968 to 2005. Other promotions like Ladies Legend Pro-Wrestling, Ice Ribbon, JWP Joshi Puroresu and others followed suit. In Japan, women participated in all manner of bloody hardcore matches like the infamous electric barbed wire death matches or the exploding cage matches decades and decades before the female WWE superstars like Trish Stratus, Lita and others were permitted to swing a kendo stick, enter a steel cage or climb a ladder. 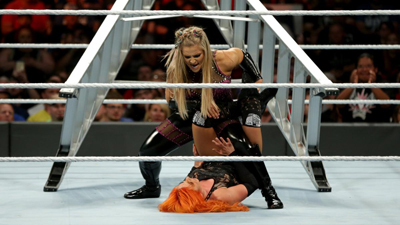 I have no doubt that the Evolution pay-per-view will be one of the best of the year simply because the WWE’s talent pool is the best it has ever been and the women in it are phenomenal, even if they are still misused by the bookers. What is a shame is that the WWE as a whole is taking so much credit for finally catching up with the rest of the world and righting their own wrongs. While we are at it though, how about giving the women their own weekly show? Now that would be something to really cheer about.