DDP’s second book focuses more on wellness and self help

“Diamond” Dallas Page has built his reputation on helping people. His DDPY app and fitness program has changed the lives of many people and as a result a workout empire has risen. How did Page become so successful? You can find out his secrets in his new book Positively Unstoppable: The Art of Owning It.

At 304 pages, the book can best be described as one man’s road map through life. Page covers aspects of his life that many people wouldn’t know about from a childhood that could have left him defeated, his inability to read, how he coped with the world, and his life in the wrestling business.

I found it amazing that as a new obstacle was thrown in Page’s way it was his mindset that made the difference. He could have been sad and held onto past pains, but instead he would tell himself a positive story to reset his mind. Page is incredibly unique in the way he reframes adversity into opportunity.

Wrestling fans will not be disappointed as he delves into his early foray as a wrestler and even how he started in the AWA. He touches on his first connection with Jake Roberts and that relationship blossomed over the years. Page’s rise through the wrestling ranks is filled with stops in the road that he overcomes with help from friends, such as Dusty Rhodes, and his own willingness to try yoga to heal his severely injured back. (For more on wrestling, there’s his first book, out in 2000, titled Positively Page: The Diamond Dallas Page Journey.) 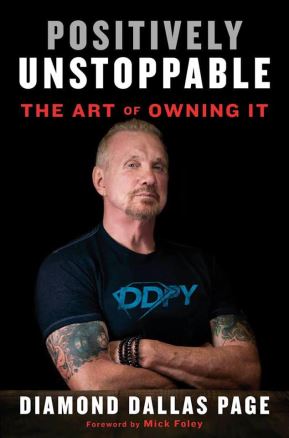 Of course, a large portion of the book deals with wellness and self help that is sensible for the everyday person. Page sees the folly in setting goals that are too big and can be easily forgotten. Rather, Page tells the reader to set goals that can be achieved incrementally. This way you can keep moving forward, make your goal and then reset for the next one. By the time you do make your pie in the sky goal you have accomplished many small ones that makes the road seem much shorter.

Page encourages folks to just get off the couch. He wants you to make up your mind to do something to change your life. His own example was of setting a goal to read a 365-page book. For a struggling reader this was monumental. He set his incremental goal to read a page a day. As a result of his goal setting he read that book and now he has written his own books, including 2015’s Yoga for Regular Guys: The Best Damn Workout On The Planet!

Positively Unstoppable covers the marvelous story of the rise of DDPY and the inspiring stories of people who had their lives changed by it. Dallas Page includes a great primer for beginners to his workout. He introduces pictures and detailed explanations of the positions that you will use in his workout. Page includes a rundown of how the program works over the first few weeks. Also, there is a healthy eating plan and directions to help you change your old habits.

I found Positively Unstoppable to be an easy read that kept me wanting to read more. The book was written in a down to Earth way that makes it feel like you are talking with Page. At times, I almost felt as if he was talking to and challenging me.

This book is exciting because it made me want to share inspiring stories from it with friends and colleagues. I have even started to juice as a result of the food section.

If you need direction to restart your life and live at your fullest then buy Diamond Dallas Page’s new book Positively Unstoppable: The Art of Owning It. Bang.