Kelly Klein promises to be next Women of Honor champion

Revenge is sweet when you go toe-to-toe with the person who stole the title from you or broke your winning streak. However, vengeance is much sweeter when you have the opportunity to face three women who have tried to take you down in the past.

These are the feelings that Ring of Honor star Kelly Klein will bring with her when she steps into the ring at ROH’s Final Battle pay-per-view this Friday, December 14, at Manhattan Center’s Hammerstein Ballroom in New York City. Klein will be facing current Women of Honor champ Sumie Sakai, and fellow challengers Karen Q and Madison Rayne for the belt.

“I have studied my opponents’ styles and their state of mind in the ring,” said Klein during a ROH media call. The “Pretty Badass” admitted that although this is the best way she can prepare for this match, there’s also the added challenge of watching her back and keeping her head on a swivel.

“I have to kind of figure out who I can rely on so we can work together — or not,” she said. “At the end of the day though, it comes down to every girl for herself.”

One thing is certain, the 27-year-old Klein is channeling most of her revenge onto one particular wrestler. “When Sumie [Sakai] beat me, I think I was resting too much on my laurels,” she said begrudgingly. Klein revealed that because she had been victorious against other strong competitors before facing Sakai, she was a little too confident going into her last match with the current Women of Honor champion. Klein has used her most recent matches as practice for this Four Corner Survival Match and is positive that she will raise the WOH belt at the end of Final Battle.

“As champion, I am going to force others on the roster to prove themselves in the ring. I will be the keeper of the championship and the face of the division,” Klein vowed.

One of the competitors knows Klein very well.

“Kelly and I came up on the scene together, so we are very familiar with one another,” Madison Rayne told SLAM! Wrestling an early December Chinlock Wrestling show in Kingston, Ontario. 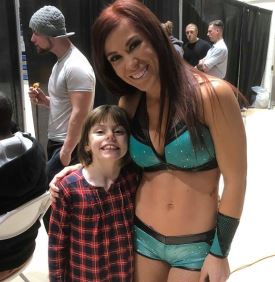 A young fan and Madison Rayne at the recent Chinlock Wrestling show. Photo by Jan Murphy

Rayne, a 13-year veteran, is no stranger to title reigns. She said that she’s been keeping a close eye on Klein, but she doesn’t believe it’s the case in reverse. “The disadvantage for Kelly though, is that I’ve really changed who I am in the ring,” Rayne continued, “so hopefully she’s been doing her homework on me.”

On the call, when questioned, Klein said she has been preparing for her old friend.

“Well, she shouldn’t have said anything because if I hadn’t been studying her, I definitely would be now,” said Klein in a poised manner. She does concede that the two did perform in the same region and came across each other many times. “We’ve both changed over the years so the dynamic for both of us [in the ring this week] will be totally different,” said Klein.

They have never been in this situation together, but Klein admitted that Rayne has been getting more attention that she originally thought. “People look at Madison as the potential new Women of Honor champion. I also know that she may be thinking that, too,” Klein said. “I know she’s going to come in with that confidence, so I just have to come in with more.”

Kelly Klein had a two and a half year no-pin streak going before Sakai broke it during the finals of the WOH title tournament at Ring of Honor’s Supercard of Honor in April. Klein said that accepting defeat is tough, something she never wants to experience again. “Just the look on my face when Sumie won the title I think said it all. I was just really disappointed in myself,” she confessed.

The Pretty Badass is now looking at Final Battle as a chance to redeem herself and make things right. “I now have a chip on my shoulder and something to prove,” she continued, “I am going to be the next Women of Honor Champion.”