NXT TakeOver emanates from Brooklyn’s Barclays Center for the fourth time on August 18 and expectations are high for the event. Recently, SLAM! Wrestling participated in a teleconference with WWE’s Executive Vice-president of Talent, Live Events and Creative, Paul Levesque (Triple H), about his thoughts on NXT’s next big show.

From the start Levesque was very positive about TakeOver and a bit of the fan came out occasionally. “We are really excited about NXT returning to the Barclays Center in Brooklyn this Saturday night,” said Levesque. “It is hard to believe that this is the fourth time we are there with NXT Takeover. It just continues to grow every year.” 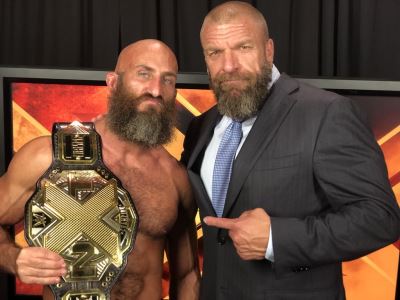 “We have a stellar card this weekend that should blow the roof off of the Barclays Center. It just speaks to the depth of NXT at this time. I could make a list of some of the people who are not on this card and it is really, really strong.”

With that statement Levesque was able to pinpoint the strength of the NXT show and that is the number of high quality of wrestlers NXT possesses. Levesque thought that having so many quality talents in the fold is a wonderful problem to have.

“That is what I like right now there is a depth pool, people at the top that is very thick and yet you have people who are right underneath them that are chomping at the bit begging to get more time and begging to get a better shot at the top,” said Levesque. “It keeps everyone growing and keeps everyone progressing. To me, I am really happy with where we are right now.”

The constraints of having a one-hour weekly television show makes it difficult for all of the NXT wrestlers to be given ample screen time. While some might see this as unfortunate, Levesque had other thoughts. The lack of time can keep the performers fresh in the minds of the viewers.

“So, you have to split things up and not over expose talent with a bunch of segments,” said Levesque. “Are there times when I would like to get more people in to the show and wish the show had a slightly longer format? Sure. I think it works the way it is and I’m happy. I would rather have too much talent and spread them out and build the desire for them and be strong then to over expose talent. Too much of a good thing is still too much.”

When reviewing the line-up for TakeOver, Levesque was clearly impressed with the quality of matches he is presenting. “The difficult thing for me looking at this card, and I feel like I say this a lot with NXT, but I look at this one and it is hard for me to go through this and say what do I think the match of the night is going to be.”

When asked if another wrestler was considered to be added to the main event to make the match a three-way dance Levesque made his feelings clear. “Given the history between Johnny Gargano and Tomasso that it made sense to go to a single as anyone else would be a third wheel, so to speak at this time without a story to plan out,” said Levesque. “It is the right thing to do and the right place to go. I know they will tear it up as they always do anytime they step in the ring together.”

NXT TakeOver looks like it might be the best wrestling show in North America this weekend. Which match could be best? It is hard to say, but what isn’t hard to predict is that the quality of matches will be very good.