By BERNADETTE JOHNSTONE – For SLAM! Wrestling

Anyone who knows me, even a little bit, knows I am vocal and ALWAYS have something to say. Very few times have I been rendered speechless, but when I woke up on February 7th and signed into my social media (which is the norm for everybody in this day and age) my heart immediately sank.

Confusingly, my thoughts were racing yet my mind was blank.

Then I get a message from Greg Oliver asking me if I wanted to put together something to honour Brian’s memory on SLAM! Wrestling, so here we go. 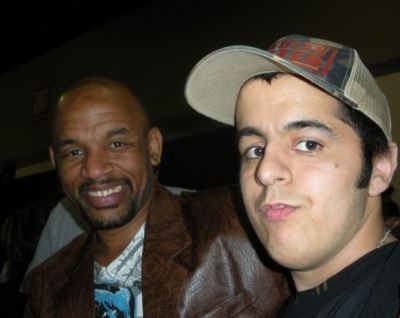 First off, he was one of legions of dedicated wrestling fans in and around Toronto, calling Mississauga home. As one of them myself, our paths crossed often at shows, but that’s not always the same as getting to know someone in-depth.

So I messaged a few friends for help with this remembrance, in tribute both to Brian and all the fans out there like him who keep wrestling — especially indy wrestling — alive.

I wanted to make sure I did this justice as I believe he deserves the acknowledgement that he never really asked for … if that makes sense.

While I could have just scrolled my social media news feeds and quoted everyone, it’s better to hear from those who knew Brian too.

Dave Bullard remembers Brian “waiting for his call” the day of the Smash Wrestling Kicks ALS fundraiser in June 2015. Brian was by his side helping out from first thing in the day until Dave dropped him off at home the following day. Brian was not looking for a thanks or acknowledgement. He just wanted to help. All day, he just kept saying “What can I do? How can I help?” Dave still can’t thank him enough. Brian and Dave became instant friends as they bonded over their mutual love of wrestling, mixed martial arts, the Pittsburgh Steelers, beer and chicken wings. 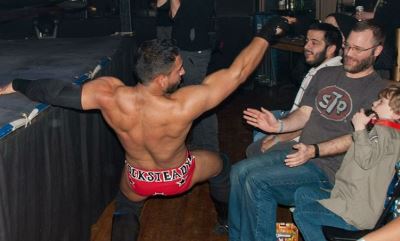 Tarik lands in the lap of Brian Da Silva and Dave Bullard. Photo by Robb Vanderstoel.

Another fan, Steve (affectionately called “Chubbo”), responded initially rhetorically: “What can I say about Brian that everyone else hasn’t already?” He’d met Brian a bunch of times at Smash Wrestling shows and remembers having some quick, friendly chats with him. Steve never really got to spend time with Brian until a few years ago when Dave Bullard and Smash Wrestling ran the ALS Fundraiser. Chubbo agreed to help Dave sell raffle tickets, along with whatever else he needed assistance with on the day of. By the time he arrived, Brian had already been there for a while and had organized everything. All day Steve remembers Brian running around the building, constantly asking Dave, “What else can I do to help?” Anyone who saw Brian that day (myself included as I was helping with the 50/50 raffle) saw that Brian did this with no thought of anything in return, he just wanted to make sure everything went off without a hitch. That was the kind of guy Brian was. Steve also remembers hanging out by the raffle table during the event, and just laughing and joking about all things wrestling.

Brian had a smile that just lit up your day, and a way of completely shifting your mood up, regardless of how bad you were feeling. Brian’s energy seemed boundless, and his love and dedication to all things wrestling was clear to anyone that took the time to talk to him.

Chubbo had the pleasure to chat with Brian at many Smash Wrestling shows after that, and their conversations were always a total joy. Brian always made sure to come out of his way, yelling out “CHUBBO!” and greeting him with a big smile to make sure he got Steve’s attention. That is the way he greeted everyone — so warmly! Chubbo will treasure those chats from each show, just two guys shooting the bull about anything and everything.

On Facebook, promoter Chris DeCarvalho celebrated a “good Portuguese brother” who “was a passionate fan and supporter of the Ontario Indy Wrestling scene in the GTA and beyond. A longtime fan of both wrestling and MMA, Brian was always quick with a smile or to make you laugh, a vocal and opinionated supporter who will be greatly missed by fans, friends and family alike. Brian will be remembered fondly by many, and was an example of how great fans help to keep a community like this one growing, and encouraging others to stay engaged or contribute for the better.” Well put, Chris.

Ben Ortmanns, who runs the CrossBody promotion and training gym in Kitchener, said that Brian often talked of learning to wrestle, and on one occasion, Ortmanns stepped up to make it happen.

“I did a seminar for Barrie Wrestling one day, and he begged me to take part, even though he had no prior training. It was something we discussed for so long, I told him that I wanted him there to take part. He was all pumped to come take part, and then his ride cancelled on him. So I went and personally picked him up so he could get to fulfill his wish. Training him for those few hours that I did was the happiest I’d ever seen him,” wrote Ortmanns on Facebook. “While my heart really hurts that he’s gone, and that we won’t get to follow up and hang out and talk shop, I am grateful and thankful that the world allowed me to have this wonderful human being in my life as a fan, a supporter, and a friend.”

James Kee, one of the powers behind the Smash Wrestling promotion, said that he has never seen someone more willing to help or have more desire simply to be your friend than Brian.

“Brian had an amazing passion for what we do at Smash and pro wrestling as a whole … and I think too often … we take these things for granted,” Kee told me.

At the February 25th Smash Wrestling show, titled F8ful Eight, James said a few quick words to honour Brian as the crowd chanted Brian’s name. He used the word loyal, as that was how so many posts labelled Brian upon his passing, and said it was most fitting. Even if you had a “falling out” with him he would still be there … just because you needed him! We could all learn from this life cut FAR too short.

Brian had just turned 29 years old and died of a heart attack. When I heard the news of HOW he passed, I cried as this was how my mom died 11 years ago at what people say is young (48 years old). My heart broke at the thought of his parents, family and closest friends saying goodbye at the funeral on February 9th.

I know that I speak for all his fellow wrestling fans when I say that I hope wherever Brian is, that there is a WrestleMania calibre show of long passed titans going on, and that he’s making plenty of new friends from his ringside seat.

To his closest friends and family, we wish you the best and will keep you in our prayers in this time of mourning.

Bernadette Johnstone is a long-time Ontario wrestling fan; chances are you heard her before you saw her.